Welcome to an ongoing inquiry about the behavior of people and dogs.
Blog Home >> Animals and the People Who Love Them >> Book Review: Wag — The Science of Making Your Dog Happy 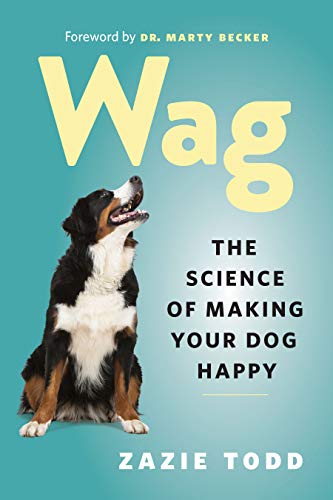 Zazie Todd, the author of Wag, The Science of Making Your Dog Happy, has already made many contributions to the world of animal behavior and dog training. She has her own blog (which I never miss), Companion Animal Psychology, and a column in Psychology Today, “Fellow Creatures“.

One of the things I like about her work is that she’s a science nerd in the best of ways, and her writings are full of research that is both theoretically interesting and relevant to our daily life with dogs. Just as the subtitle suggests, so is Wag, her new book.

I hereby admit to having read only some of the chapters, the dogs and the Garden-in-May keeping me busier than I would have expected. (Not to mention what I am now calling Covid Brain, a syndrome in which one finds reruns of beloved TV shows endlessly amusing, no matter how many times they’ve been viewed.) But I’ve read enough to recommend this book, because it is chock full of information that fulfills the promise of its subtitle.

The chapter titled “Motivation and Technique” is an excellent example. We learn here, for example, that several studies found that dogs learned no faster or better to a clicker than a spoken word. (In one study the marker word was “Bravo,” which I instantly tagged as a lousy secondary marker, because it’s two syllables with no hard consonant. I use “Good” myself, which is fast and easy for me to say.) Additionally, one study confirmed my intuition that one large handful of treats is no better than one treat, at least, in this study, in terms of the speed of a dog’s recall. I’ve always believed, just intuitively, that a “jackpot” should be many treats given out one after the other, one at a time, rather than one big handful. It’s interesting to have research support what was simply a guess.

And timing? Oh man, we knew that timing is everything, but still . . . Wag cites a study that illustrates that beautifully, done by Dr. Clare Brown, which compared a treat delivered instantly after a behavior, versus after a one-second delay. The dogs were taught to put their heads in one of two boxes, and an infrared beam detected a correct response (slick!). That linked to a computer, which “beeped” to signal the arrival of food. According to Brown, sixty percent of the “instant arrival” dogs learned the task during the time allowed, while only 25% did in the “one second delay” category. That’s an impressive difference.

It may be location, location, location in real estate, but it’s timing, timing, timing in training. If you’ve ever seen Ken Ramirez or Steve Martin of Natural Encounters train, then you know what I’m talking about. In my experience, great timing is one of the hardest things to teach, but focused practice makes a big difference.  Timing would be a great exercise for remote family dog training classes, yes? It wouldn’t need to involve the dog at all, just create a way for people to work on their response time. Could be a fun game for everyone.

I very much enjoyed the discussion of play bow function in Ms. Todd’s chapter, “The Social Dog”. Years ago, ethologist and canine specialist Dr. Mark Becoff hypothesized that play bows function as metacommunication, or a communication about a communication. As in, “Don’t take what I’m about to say seriously,” or, in dog societies, “Don’t take the bite I’m about to give you seriously, I’m just playing”. But several studies suggest otherwise: Play bows were found to occur after both dogs had paused, and appear to function as a solicitation of continuing the play. (Note that Dr. Karen London and I have hypothesized that these pauses are critical to healthy play as a way of avoiding over arousal.) 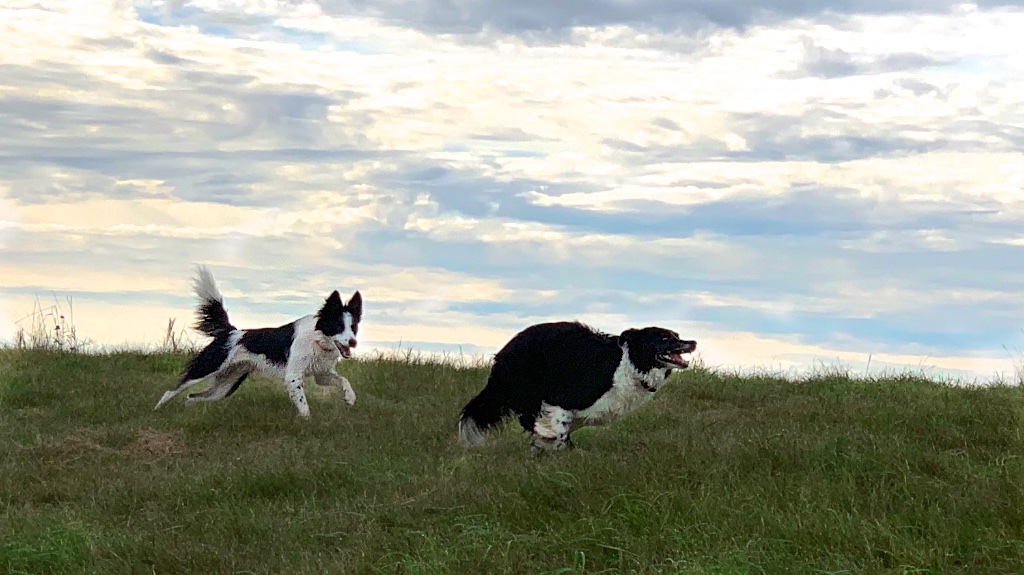 Play is a topic near and dear to my heart, in part because the co-author of our book Play Together, Stay Together, Karen London, is one of the most constructively playful people I know. Not to mention that playing with my dogs, and watching them play together is one of the greatest joys of my life. And so I was a tad disappointed that there wasn’t more information on play in “The Social Dog” chapter–Understanding dogs with different play styles? Avoiding over arousal in play?–for example. This chapter, feels a bit thin to me, given that the social nature of dogs is at the core of their being, not to mention their happiness.

Wag tries to cover a lot of ground, and because of that, some of the sections are less comprehensive than I would like. However, each chapter cites studies that are both informative and practical. The chapter “Dogs and Their People” summarizes some interesting research on what situations cause a dog to seek out someone new rather than their usual caretaker.  The Chapter “Food and Treats” has some helpful ideas on how to help people stop over feeding their dogs. The chapter “Dogs and Children” has many tidbits of important information, including the fact that there are few studies out there on interactions between children and dogs. Given the high rate of dog bites to young children, this is a surprising lack of attention from researchers. 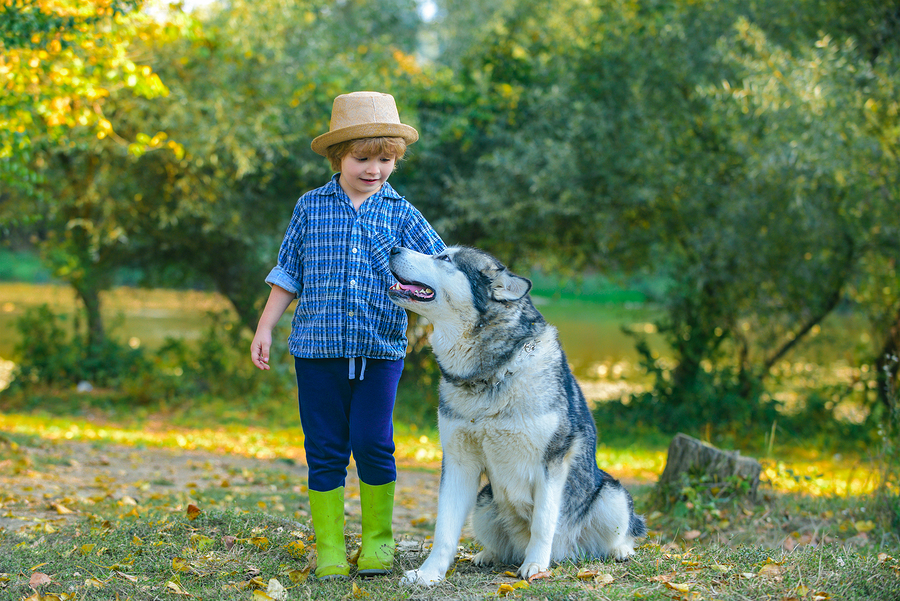 In summary, Wags contains a lot of interesting information in a highly readable format, and deserves to be on the bookshelf of anyone who loves learning what science can tell us about our remarkable relationship with dogs.

Meanwhile, back on the farm: Our first night in our safari tent! What a joy to “get away from it all” in the tent my amazing husband built for us on top of the hill above the house. 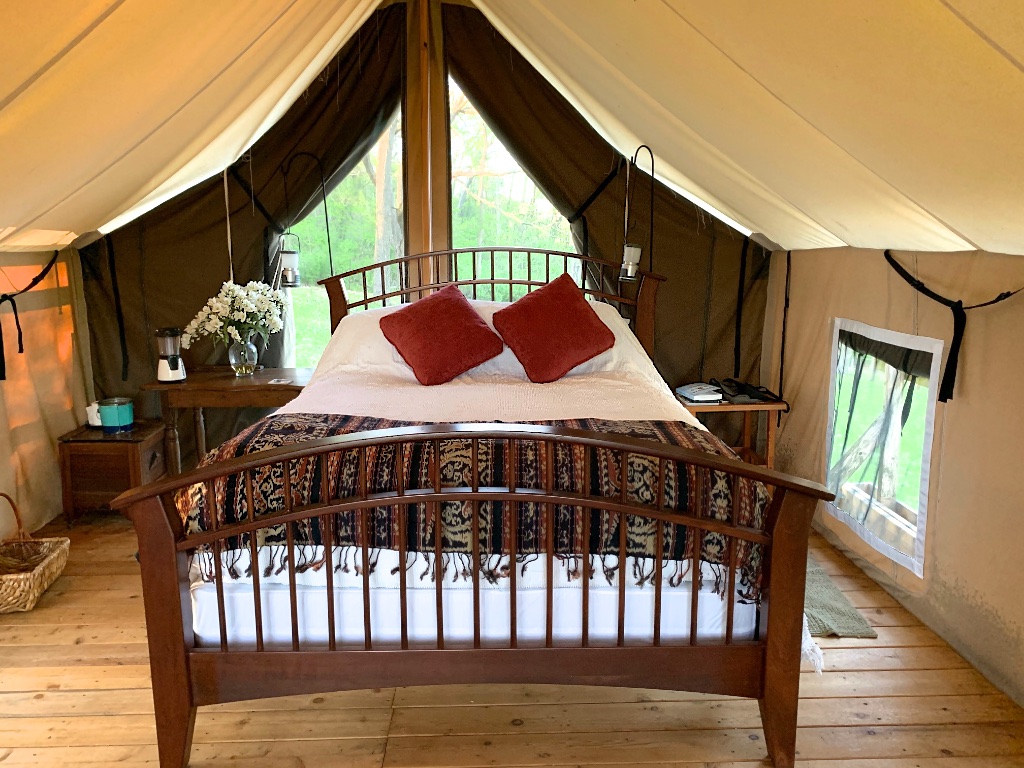 Here’s just part of the view from the deck in front of the tent after the sun went down. We sat on the deck and were serenaded by Catbirds, Orioles, Wrens, Blue Winged Warblers, Robins, Wrens . . . and later, a chorus of tree frogs that made my heart sing. 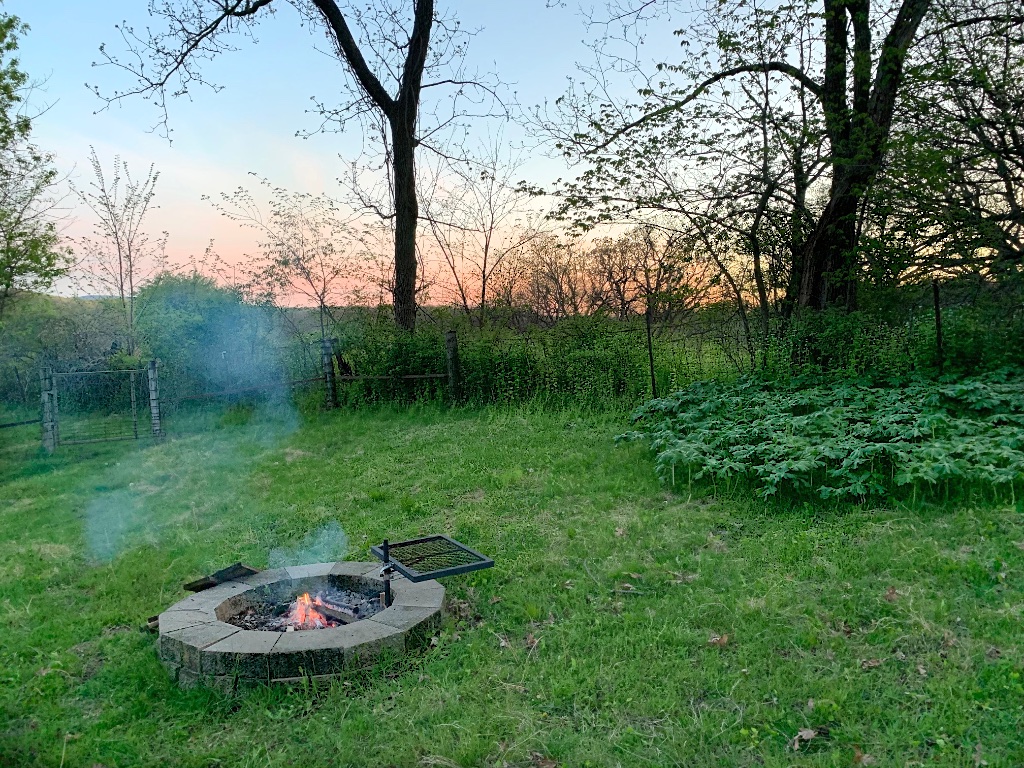 The next morning, Jim got up, made a fire and brought me tea in bed. Yeah, I’m that lucky. (Toots slept in bed with us, the BCs slept on carpets on the floor. Maggie would like you to know that 47 degrees is awfully cold for sleeping, and why didn’t she get to get up on the bed too?) This was Skip’s first night sleeping out of a crate, and he was a perfect gentleman. No chewing, no pacing, no lifting his leg. What a good guy.

Last week we said goodbye to Solo, one of my favorite ewes. (Named Solo because she tended to stay by herself.) She had become very thin, and her legs were weakening. It’s very hilly here, and the sheep have to come down a steep path to move between the pasture and the barn. I could see her struggling the past few weeks, so our sheep vet, Dr. Jeff Kunart, bless him, came out and put her down gently and peacefully. She died eating mouthfuls of corn and oats. She was gentle and sweet and I always had a soft spot in my heart for her. Here she is just before we put her down. Off you go my sweet Solo, may you live on in lush, green pastures. 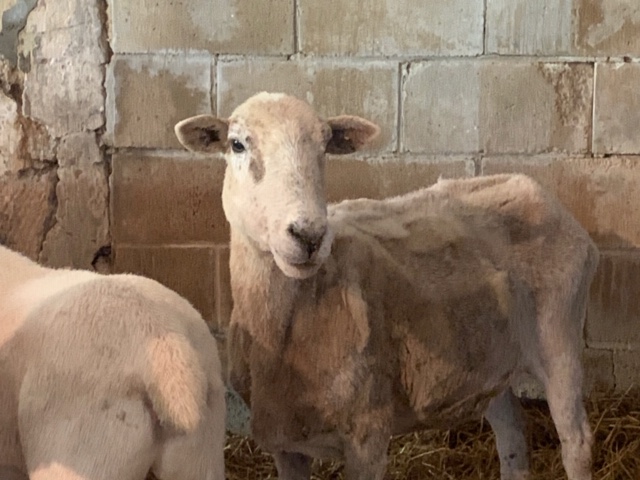 The Tulips and Daffodils are almost gone, but I had fun taking photos of the few remaining: (I was going to include just one of these photos, but can’t decide which one I like most. Thoughts?) 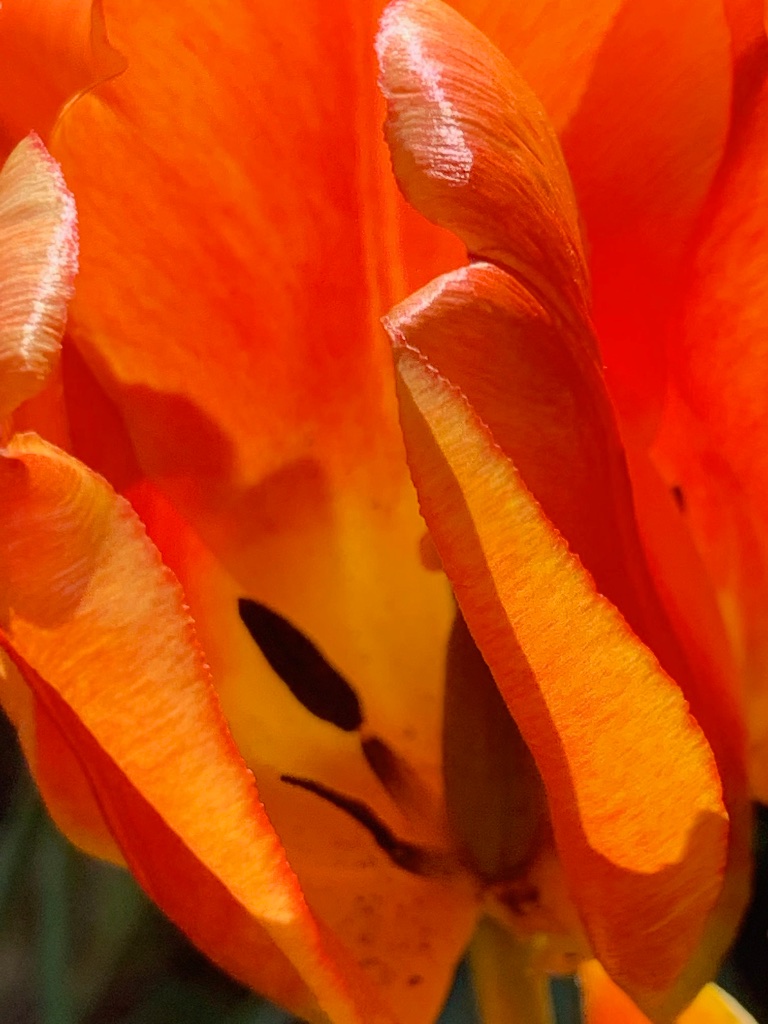 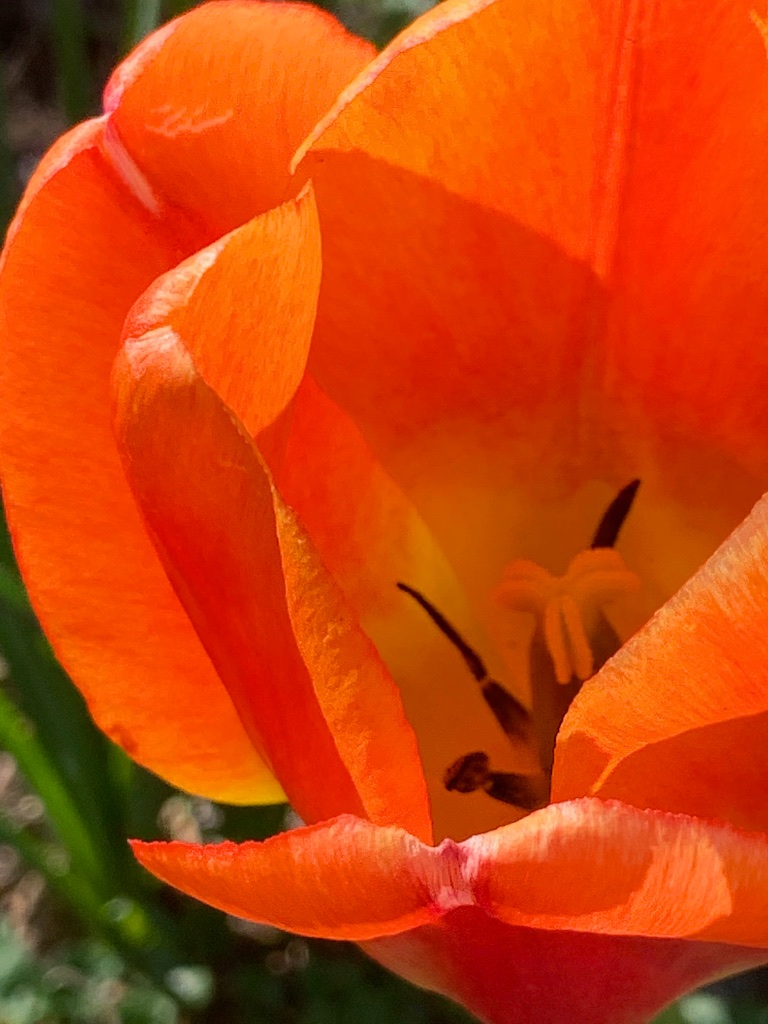 Here’s hoping your week had lots of small joys within it. And a new good book? We’d all love recommendations!