Welcome to an ongoing inquiry about the behavior of people and dogs.
Blog Home >> Animals and the People Who Love Them >> Can Animals “Blame” Others?

As many of you know, when I went to pick up Willie after his surgery, he walked past me, greeted 4 other people, and would not make eye contact with me. This continued for 2 days after his surgery. It did not appear to be a consequence of the anesthetic or pain, in that although he was clearly a bit dopey, he enthusiastically greeted everyone else. The morning after surgery, as I sat beside him on the living room floor, he refused to lie down next to me, turned his tail to my face and lay looking longingly up the stairs toward my friend Meg. This continued, full throttle, for two days. Gradually he warmed up to me, and I’d say we are now back into the relationship we used to have. He loves me, I love him, and he loves everyone else just about as much. I say this because he greets me enthusiastically, snuggles against me when we lie down together, and does his charming little moan’y thing when he lays  his head against my cheek. But I find myself fascinated by his reaction when I picked him up from surgery, and it has me thinking about what goes on in the mind of a dog.

There are two (at least) obvious explanations for his behavior:

1) He was able to instantly pick up on my anxiety about how he had done through the surgery, about the poor diagnosis and how his recovery would go. Thus, he sensed my anxiety, and consciously or not, he avoided me to avoid it.

2) He consciously “blamed” me for what happened to him.

The second explanation feels the most “anthropomorphic” and perhaps the one that might be immediately dismissed. I was betting on #1 at first, but as the days went on I began to change my mind. First off, he would have had to have sensed my internal state without any visual cues, since he never looked anywhere near my direction. Rather, he appeared to choose to avoid looking at me as he entered the room. However, surely he could have used other sensory information … chemical cues being the obvious ones, given the ability of a dog’s nose. I should add here that although I was indeed more concerned about his recovery and care than anyone else in the room, it is not as though I was agitated about it. I expect I was in about the same state that most owners would be in when picking up their dog from major surgery. I don’t think my behavior was especially “nervous” but that doesn’t mean that my scent didn’t change because of an internal state. So, I’d say we can’t dismiss that he avoided me because he sensed some internal anxiety on my part and it made him nervous, but neither can we presume that this was the case.

But by the next day I can imagine no sensory-related reason why he would continue to shun me, and make no mistake about it, behaviorally it was the exact equivalent of shunning. He simply refused to greet me, acknowledge me or make eye contact with me in anyway. He would take a piece of food from me, but without enthusiasm. The word “grudingly” comes to mind. All of his behavior fit what would be a “cognitive” explanation, in that he was “blaming” me for what happened to him. He behaved normally to everyone else, but behaved as though I was not in the room. It might be relevant (might not?) that I am his primary caretaker, I am the one who has taken him to all his vet appointments, restricted him to leash-only activity 4 other times in his life, and the one who took him in to the vet school, talked with numerous people about the diagnosis and surgery and eventually the one who  handed him off for the procedure.

So. Is it possible that a dog could “blame” another? If we agree that “blame”is the “act of censuring, holding responsible, or making negative statements about an individual or group that their action or actions are socially or morally irresponsible” is a dog capable of it? (Not the speech part obviously.) I have to say that I have seen several cases of cat behavior that looked more like this than from a dog. It’s not uncommon for cats to ignore their owners when they return from a trip (but also be the kind of cat who loves visitors, so it’s not about being unfamiliar.) But I’ve heard less about this in relation to canine behavior. I know that many will argue that “blame” is a human construct and that we must avoid attributing it to dogs. But let me throw this out there: How much cognitive complexity would it take to hold another responsible for their behavior and act on that knowledge? Some of you commented on this when I first mentioned Willie’s behavior, with some arguing any thoughts of blame from a dog would a classic case of mis-placed anthropomorphism, while others argued that perhaps it’s not so radical to propose that a dog could make a “negative judgment” about the behavior of another and act on it accordingly. I’d say the trickiest part of this possibility is the requirement that a dog would have to hold a memory in his mind for a considerable period of time and continue to experience the emotion associated with something that happened in the past. Your thoughts? Your own experiences? I’d love to hear.

MEANWHILE, back on the farm: It’s 97 degrees outside Farenheit, so I’m happy to be inside right now. Willie is sleeping in the crate, the sheep are lolling up the hill in a shady, breezy area, and the flower buds are opening and crumbling in the same day. Willie is on week 3 now after surgery. He is more animated than last week; I can’t say if that’s because he is adapting to his new life, or recovering from the exhaustion (and pain) of surgery. I’m guessing it’s some of both. His PT takes 1.5 hours a day — we had to keep up the heat (before) and ice (after) because there is still quite a bit of swelling around the surgery site. I have to admit I’ll be glad when each session no longer takes 30 minutes. It’s getting a bit old. We have another PT appt tomorrow, maybe we’ll be freed of the heat and ice?

We’re all doing okay with our new routine. When I’m not working I’ve been doing a lot of gardening instead of dog training and herding, Sushi has kept me and the medical profession busy — she had 2 teeth extracted yesterday and her kidney values aren’t so good, so besides the blood in her urine we are starting an entirely new protocol for her. (And yes, I’m hoping her kidney values improve after the teeth have been removed, but I can tell you I’m a lot more hopeful than my vet.) The orphan lambs are doing well, they are thinner than the other lambs but research suggests that they’ll catch up eventually.

Here they are right before I gave the lambs their grain for the day: 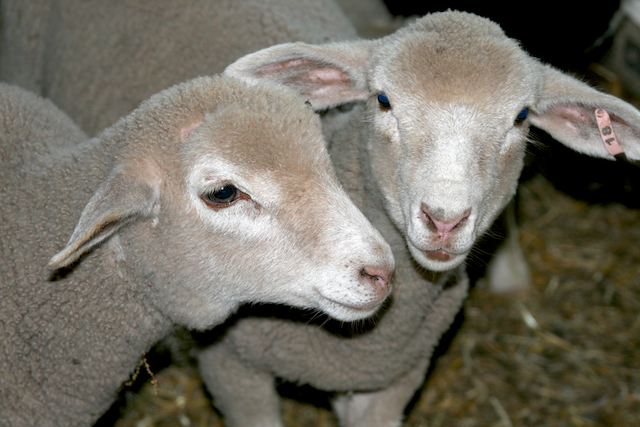 And here’s an Iris that bloomed this morning: 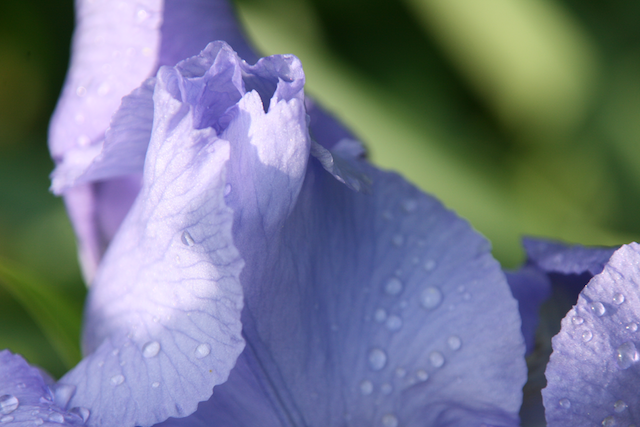 « All Exercise is Equal, but is Some More Equal Than Others?
Love Has No Age Limit is Here! »