Welcome to an ongoing inquiry about the behavior of people and dogs.
Blog Home >> Animals and the People Who Love Them >> Can Dogs Feel Pride?

It’s Sunday of Labor Day Weekend and Maggie is exuberant. Her face is glowing. She’s leaping onto her hind feet and pirouetting in a half circle like a ballet dancer while looking into my eyes. If she’s not actually smiling, she’s doing a perfect imitation of a slap-happy human grin.

We’d just done our first run at the WWSDA Labor Day Trial in Hudson, WI, and it went well. Nowhere near perfect, but still a lovely run, and the only mistakes were handler errors on my part. We ending up placing seventh on that run, sixth on the next, and 5th in combined scores. The only higher scores were handlers who run in the advanced class (Open), which includes, if not the equivalent of tennis stars like Serena Williams, the ones she plays against in the US Open.

I was thrilled, in part because all the things we’ve been working on the last few months paid off. I won’t bore you with the details, but Maggie did everything I asked her to do. In addition, the sheep and course were so challenging that I almost scratched. Last year Maggie couldn’t handle the sheep, and let them run away from her, back to where they had started. I had to walk/run about 300 yards (or was it five miles?) up a steep hill in order to get her back. The “walk of shame” we call it. The only saving grace was that one handler noted I “ booked up the hill amazingly fast”. You have to take it where you can get it.

This year the sheep looked ever tougher. Only half of the first Open runs got any scores at all. The line between putting too much pressure on the sheep or too little was as fine as a razor’s edge. But I decided I’d at least give her a try, and if I had to leave the post then that’s what I’d do. With last year’s trouble fresh in my mind, I’d specifically trained her to take an extra flank (turn) around the sheep at the top of her outrun to prevent the sheep escaping back from whence they came. Darn if Maggie didn’t take that extra flank perfectly, took immediate charge of the sheep and kept it up the entire run.

So you can imagine that I felt gooey with pride in my little dog Maggie. (Thank for you indulging me by just reading about it.) But here’s the question that occurred to me last night when I emailed my friends that “I swear Maggie is just as proud and happy as I am.” Is it possible that Maggie was proud as well as just being happy, or was I simply falling into the worst of anthropomorphism? I’m sure we all agree that dogs can be happy in the moment; anyone who doesn’t agree with that might want to study some basic neurobiology. But pride in accomplishment? That’s an entirely different level of emotional complexity. That mammals can share “basic” emotions like fear, rage and disgust is widely accepted, but “secondary emotions” like jealousy, guilty and pride are far more controversial.

In keeping of the irony of the Labor Day holiday, I’m going to avoid doing much of it today (labor, that is) , and skip a lengthy discussion of secondary emotions in non-humans animals. For those who want to read more about it, I refer you to For the Love of a Dog: Understanding Emotions in You and Your Best Friend. But here I want to ask you about your own beliefs and experiences regarding pride in animals. Have you seen an example of a dog (or horse, cat, etc.) behaving in a way that suggests to you it was feeling pride? My own belief is that because Border Collies have an inherent predisposition to take control of the sheep, they are well aware if they manage it well or not. Experienced trial dogs surely know when things are going well. Or not. Does that mean they can feel pride if they do a good job?

There are, of course, other explanations for dogs behaving as if they are proud. Confidence can look like pride, but those are very different emotional states. Maggie’s exuberance was clearly an expression of joy, and probably in part a reflection of how happy I was. However, I know Maggie as well as I’ve ever known any dog, and I would bet the farm that much of her joy had less to do with me, but because she had such a good time doing what she loves. But proud?

To facilitate our discussion, we need to agree on the definition of pride. Here is the primary definition, offered by Merriam-Webster:  “The quality or state of being proud: such as 1) inordinate self-esteem, as in conceit, 2) a reasonable or justifiable self-respect,  and 3) delight or elation arising from some act, possession, or relationship (as in, parental pride). Let’s agree to talk about definition #3, or delight or elation arising from some act.

So, what do you think? I’d love to hear what you have to say.

Before signing off, I want to thank all the members of WWSDA for putting on such a great trial, along with the Kinney family who host us at Badlands Recreational area. It’s an astounding amount of work to put on a good four-day trial, and Jim and I were pleased to do the bit of volunteering that we could to help out. I was especially proud (there’s that word again) of how well this trial takes care of the sheep: They had a cool, shady area to rest in after their run, then were allowed to go back up the hill to graze before running again. One good example of that is shown in this photograph. See the sheep in the foreground? She’s chewing her cud, which sheep only do when they are reasonably relaxed and comfortable. Would the sheep rather have skipped the trial? No doubt, but they were well taken care of and that’s what shepherding should be all about. 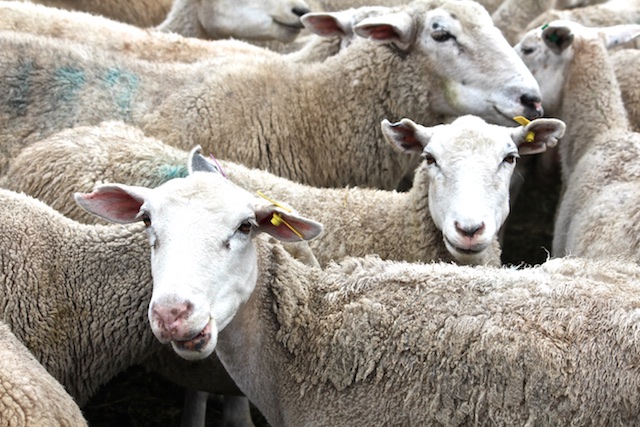 Here is the whole flock let out to graze after the last run on Sunday. Surely there’s not a more beautiful trial site than this one. (Not to mention intimidating for handlers and dogs alike. The sheep are basically set out in the next county. At least that’s what it feels like.) 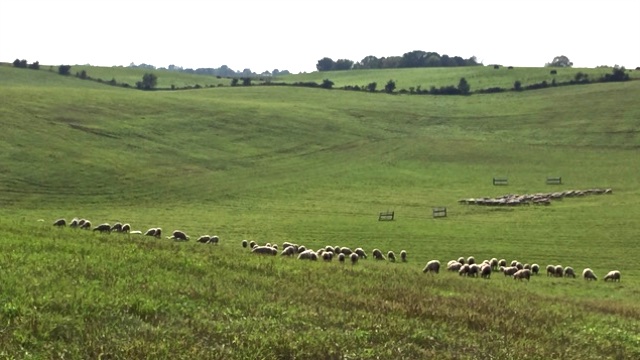 We only got to watch a few of the International sheds, in which all the uncollared sheep have to be split off from the 5 with collars. Not so easy to do when some of the sheep in each category are best buddies. Here’s what the whole group looks like while moving into the shedding ring, with Marianna Shreeder’s dog Nel doing the honors. 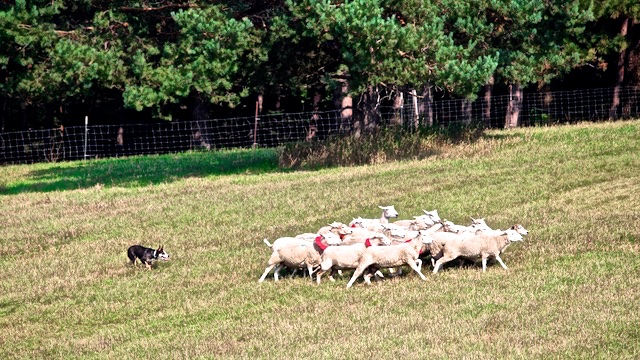 MEANWHILE, back on the farm: It’s all about sheep out here right now, including getting the winter’s hay safely stacked in the barn. The new hay is on the left, last year’s on the right. We’ve had so much rain that there is pasture to spare still, but you never know about the months to come. Feels great to have a barn full of hay! 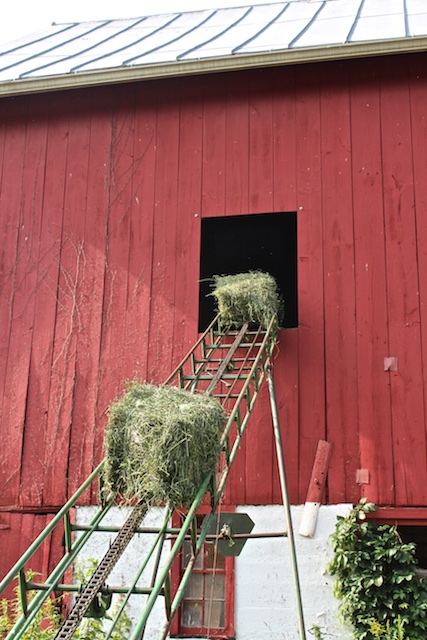 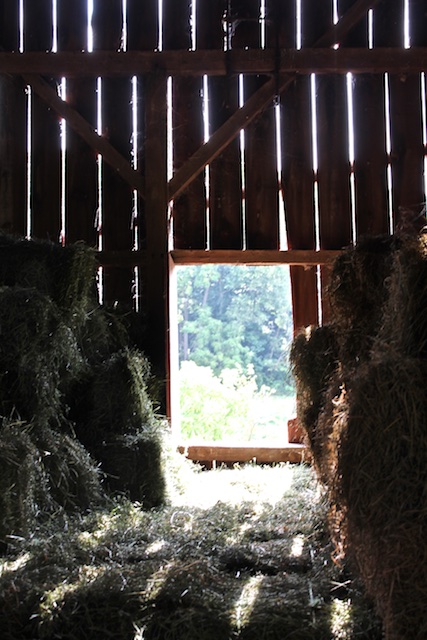 « Considerations for a City Dog. And Dental Supplies.
Family Dog Training Classes-What’s in Your Curriculum? »