One of the best talks at APDT’s Cognition Symposium was Monique Udell’s presentation on her research on pointing gestures. I promised before I went that I’d write about new results on this issue, and Monique gave me lots to talk about. To recall the issue: some researchers, Hare and Tomasello originally, found that domestic dogs were able to follow the direction of a pointing arm to find food, while wolves and chimpanzees were not. They concluded that domestic dogs were inherently better at interpreting human gestures than other animals, presumably because the two species had co-evolved for over ten thousand years. If that were so, then it means that dogs contain some permanent change in their genetic complement that makes them able to communicate more effectively with people. Much has been made of this in a wide range of scientific papers, most of which have accepted as fact that dogs are better at ‘reading’ human gestures than even our closest ancestors, chimpanzees, and wolves, who are biologically the same species as dogs.

I’ve always been curious, as I mentioned in an earlier post, because in my  experience (and based on your comments, yours too), dogs seem to need to be taught to follow a point. And as was clear from the video, one needs to be careful about discussing “pointing” with the arm. Does the head move as well? The eyes?

Monique Udell, working with Dr. Clive Wynne at U. Florida, did a solid, well-controlled study to tease these issues apart. It was lovely work, with lots of good controls and a thoughtful experimental design. (As a preface, one of the points that she and her advisor, Dr. Wynne, made — and a good one at that — is that the noun “dog” can mean many things. Your pet dog lying at your feet as you read this? A village dog at the dump in Mexico city? A Dingo in Australia?)  She tested owned dogs, shelters dogs and hand-reared wolves. She varied whether the subjects were inside or outside, had a fence or barrier between them and the tester, and whether the ‘pointer’ was the owner or an unfamiliar person. She also (YEAH! first time I’ve heard of this and about time!) did NOT have the food actually under one container. Other tests have some food in both, but also have accessible food in the one pointed to. Surely dogs can tell the difference between a little food and a lot of food, not to mention different kinds, how fresh, whether just touched by the tester, etc). The subjects were taught that one container would have food, and then were made to wait while the containers were moved to the side. The tester (standing, some in earlier studies were sitting) pointed to one container or the other (no head turn or eye movements allowed if I remember correctly). If the dog went to the container that had been pointed out, it got a food treat. If it went to the other, it got nothing.

It turns out (I’m summarizing here, her details will be published soon I’m sure) that hand-reared wolves tested outside scored just as high as pet dogs tested inside, scoring about 70% correct. Pet dogs tested outside don’t do much better than chance, whether with familiar people or not, and shelter dogs tested inside scored no better.  If you test the dogs who did well with a fence between them and the pointer, they also do no better than chance, and about as well as wolves were shown to do in the past.

She presented lots more work, looking at what aspects of the gestures in all the studies are most effective. Clearly the most effective are a combination of head and eyes turned toward the object, and what they call a “dynamic proximal point” — the arm moves toward the object and stays there, versus a point that is made in one motion, then withdrawn

Thus, Udell and Wynne are not in agreement with Hare et al (also see Riedel 2007) who argue that only domestic dogs are capable of following pointing gestures. Based on their results, they argue that environment and development are the key factors. For example, the wolves that were tested earlier, they argue, were behind barriers, and not necessarily by familiar people. They argue that what is most different, along with the context of testing, is that dogs and wolves have different developmental time frames. The critical period for domestic dogs peaks at 7 weeks, end around week 14. In wolves, in peaks at 3 weeks, and ends at 6 weeks. This gives dogs a much longer time to think of humans as social companions. No matter what the developmental differences, the fact that pet dogs and shelter dogs did no better than random does not support “co-evolution” as a driving force creating permanent changes in the behavior of dogs.

Here’s what I love about all this: This is a great example of how science works. Someone discovers something. Some people consider it fact. Others question, wonder… and then someone else does more research and tries to replicate the results, and comes up with a different outcome. Hummm. Someone altogether different does another study, and another… and eventually, we start teasing apart what we know, and what we don’t know. It’s like an intellectual roller coaster. Science gets a lot wrong at first, but often (not always) ends up correcting itself, like a person wavering over a balance beam.

So what’s the answer to the question about dogs, pointing gestures and genetic predispositions based on co-evolution of two species? The answer is clear: we don’t know yet what’s going on, but we’re starting to ask better questions.

MEANWHILE, back on the farm: We actually left the farm last weekend, so that our sitter for New Zealand, who is new, could get in a trial run. (She rocks — She even wrote a diary, from Willie, for us to read when we returned. I feel so lucky to have her — leaving the farm for 3 weeks is hard. It’s way over my comfort zone, so I do all I can to set things up to go smoothly and safely. Thank heavens for great sitters, I couldn’t leave home without them!)

We spent the weekend at a friend’s cabin and hiked in nearby state parks. We did a 5.5 mile hike on Saturday with our packs (mine only half full, still working up to the real thing). Lots of up and down, so it was a good workout. I was happy to get to the end, but except for one uphill grind it felt pretty good. One day of the Milford includes 5 miles of nothing but uphill, so it’s good to practice.

Here’s the pond on Sunday morning behind the cabin.  Wish I could include audio of the resident Kingfisher rattling his objections to our intrusion. 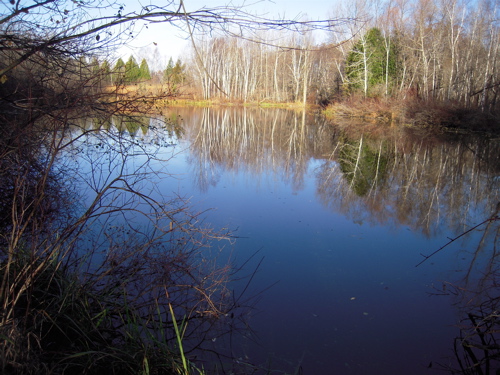 A little detail of some late fall leaves on the cabin’s foundation. I love textures, and there’s something about fall that seems to emphasize them . . . 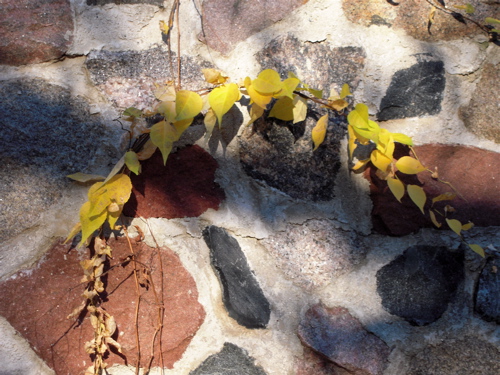