Welcome to an ongoing inquiry about the behavior of people and dogs.
Blog Home >> Border Collies >> Consciousness in Dogs

Ray Coppinger loves to start controversies, and he did a great job of it at the SPARCS Conference in June. He began his talk by stating that dogs are have no consciousness and are merely “acting out motor patterns.” It’s always hard to know what Ray believes and what he is saying to generate a conversation, but needless to say, he was highly successful at the latter.

The number of attendees who believed that dogs are not conscious or self aware was small indeed, no surprise there. I’ll say right off the bat that I’m one of those who believe that dogs are indeed conscious and aware, but I also think it is an important conversation to have. First, because the more we learn about comparative mental states between people and non-human animals the better. Second, because the minds of other animals might teach us something about our own cognition, and third, because there are important welfare implications of the mental lives of other animals.

Before leaping up and arguing that “of course dogs are conscious,” it is valuable to define what we’re talking about. Ah, there’s the rub, because we’re not even sure what consciousness is in humans. Miriam Webster defines consciousness in vague terms, calling it “the normal state of being awake and able to understand what is happening around you.”  Ah, but what does a “normal state of being awake mean”? Wikipedia does a good job summarizing current thought and relaying a history of the use of the term, but it still is a relatively poorly understood phenomenon. Not long ago, in part because of the influence of early behaviorists, scientists were discouraged from talking about subjective states like consciousness in our own species. Recently, however, the big C has become the focus of study in a variety of fields.

I’m lucky to teach at the same university that houses one of the world’s expert researchers on consciousness, Guilio Tononi. I was able to catch one of his talks about the phenomenon, and was fascinated by his theory about its origins. I occasionally understood some of the math he uses to describe his theory, having had to learn the mathematics of information theory when I took ethology as an undergraduate. The relatively simple summary is that, he argues, consciousness occurs when all the parts of your brain are communicating with each other, as they are doing when you are awake. When you are asleep, all parts of your brain are still active, but are not communicating to each other. The value of his perspective is that, if true, we can use this perspective to determine if people who appear to be in comas are conscious, a far better method than simply asking them to answer a question when they might not be able to move or speak. At the end of his talk I asked him if he thought animals like dogs were conscious and he said “Oh yes, I don’t see why not.” Perhaps not in exactly the same way as humans, but their brains are complicated enough to generate the kind of cross-communication that he thinks is essential to consciousness.

Here’s my question for you: What would a dog need to do to prove to you that it is conscious? Guard against an immediate reaction of “Of course my dog is conscious!” Remember that people can do amazing things while sleepwalking and are completely unconscious, including driving cars in traffic. Indeed, some research suggests that most of the decisions we make are made unconsciously long before we are aware of the decision making process. So… can we know if dogs are conscious? Does it matter to you? I’m all ears…

MEANWHILE, back on the farm: All the hard work in the garden is paying off; the 50 new day lilies that we planted in new garden behind the retaining wall (also new) are starting to bloom. Right now we are pretty much in lily heaven, there are dozens of day lilies and Asian lilies blooming. And such easy keepers! You gotta love ’em. Here’s one of the new ones (from White Flower Farm). 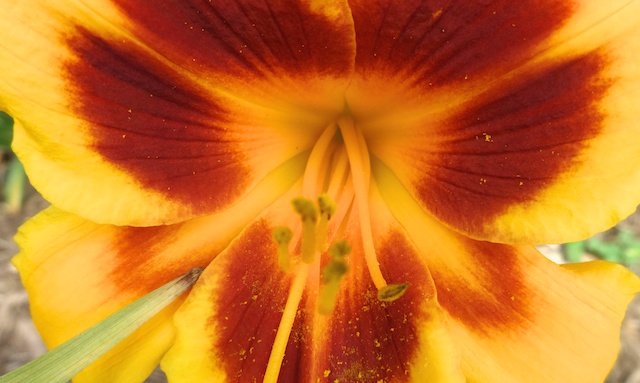 This weekend I also got to work Willie and Maggie on sheep at a farm about an hour north of here. Willie needs work on his driving. He used to like driving, but tended to over flank and ended up stopping and starting the sheep rather than creating a continuous flow. Now he is better at staying “on the bubble” (the exact place where he needs to be to keep the sheep moving forward in the right direction) but often stops and looks back at me. That means he loses control of the sheep and has to start all over again with a “lift.” It’s a serious problem, one that means he couldn’t be competitive in a trial right now. It started after his shoulder surgery and yearlong layoff, which seemed to destroy much of his confidence. But he has always hated putting much pressure on sheep, being far happier to run huge, open outruns and avoid putting pressure on the flock. My job at the moment is to make driving fun again for him, so that’s what we’ve been doing–letting him move the sheep at a pace faster than one normally wants, loping freely after the sheep with few directional signals from me.

Maggie too needs work feeling comfortable putting pressure on the sheep.  She’d much rather do an outrun and keep their heads pointed toward me than push them forward. Some dogs love the feeling of pressure between them and the sheep, as if there was an invisible rod between them. Others love to do big outruns and keep their heads pointed toward you, but avoid using the force of their presence to push the sheep forward. Dogs at the other end of the continuum are too pushy, and tend not to listen as well and move too fast. It’s a rare dog indeed who comes hard wired with the perfect amount of both push and sensitivity. Maggie and I are working on it together, and she is indeed getting more confidence. Most importantly, it feels like we are truly a team now. She is a joy to work and, truth be known, if I could get away with it I’d do little but work my dogs on sheep right now. There is so much I need to be teaching Maggie: better leash manners, more CC around unfamiliar dogs, etc. etc., but I take my spare moments and work her and Willie on sheep. Well, winter is coming soon enough, right? Plenty of time to work on that other stuff when the nights are long and the snow is flying.

Here’s Maggie on part of the new retaining wall. She loves to walk along it, and was posing beautifully by the stairs when I went to take this photo. But she lay down when I said “Stay” (she seems to have defined Stay as meaning, Lie Down and Stay, although I’ve never intentionally taught that) and then struggled to figure out how to lie down on the wall. Once down she tongue flicked, presumably somewhat nervous about her position on the wall. I was about to take another “better” photo, but thought you’d all appreciate this version. 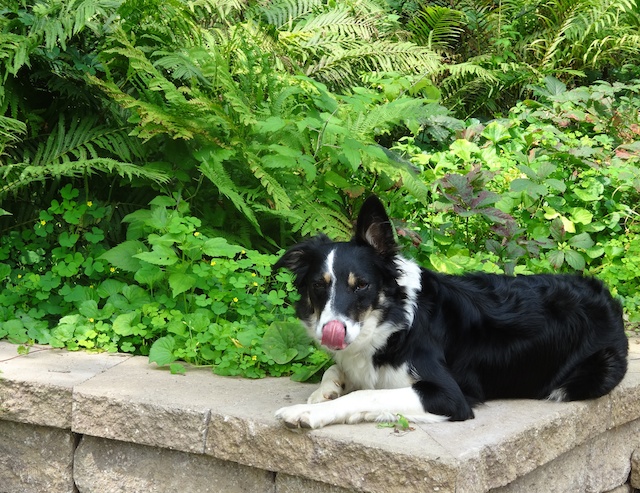 « Intervening in Tug Games: Plan A to Plan B
Sunflowers Make Me Smile »