Welcome to an ongoing inquiry about the behavior of people and dogs.
Blog Home >> Animals and the People Who Love Them >> Decoding Your Dog: A Book Review

Decoding Your Dog is a new book from the American College of Veterinary Behaviorists, edited by D. Horowitz and J. Ciribassi, and it has a lot going for it. I have some quibbles too, but let’s start with the good news. Without question the best part of the book is its continual reminder to dog owners that 1) you don’t need to get “dominance” over your dog to train it, and that 2) most aggression is motivated by fear, not a desire to become a pack leader. This point is made by multiple authors in a variety of chapters, and is a welcome addition to the chorus of progressive trainers and CAABs who are fighting the good fight against the misuse of the concept of dominance.

There is a lot more to cheer about. Authors Herron and Melese do a good job of explaining that behavior is the result of an interplay between nature (genes) and nurture (environment and learning). The first chapter by J. Neilson on canine communication is very useful; any and all attempts to educate the general public about “reading” visual communication are welcome indeed. Ironically, my only criticism of the otherwise excellent chapter on children and dogs by V. Tynes is that it suggests that adults should always “supervise” children and dogs, but doesn’t emphasize how important it is that the adults are able to read signs of discomfort in the dogs themselves. Just being in the same room isn’t enough. See for example, Robin Bennett’s excellent article on Why Supervision isn’t Enough.

More things to love: A chapter on mental exercise by M. Klinck, and several relatively thorough chapters on specific behavioral problems like separation anxiety, noise phobias and aggression. I especially like that chapters begin with a well-written and illustrative story about a particular dog, and that the format, with lots of side bars and some photos, makes its length less of a challenge than it might be for the general reader.

However, the book has some problems. For example, here’s the definition of learning in the training chapter: “Learning is defined as acquiring knowledge by instruction.” Oh dear. Does that mean your dog can’t learn to get into the garbage unless you teach it to? Or that cats won’t learn to associate the sound of a can opener with dinner without a trainer present? The fact is that even single-celled animals can learn, so an animal doesn’t even need a brain to learn, much less an instructor.

Here’s another problematic example from the text: “Wolves can’t be all that smart as a species or they wouldn’t have become endangered over much of their range, while dogs are thriving…” Again, oh dear. First off, a “species” can’t be smart, only individuals within the species can be. Second, there is virtually no correlation between the intellectual abilities of a large predator like a wolf, and its success in the world. Wolves are deemed by many people as destructive at best, and satanic at worst (yes, people still actually say that). Ironically it is their very intelligence that makes them so good at preying on domestic livestock, and is one of the many reasons that they have been eliminated from much of the country.

I also have a few quibbles with some of the training advice. Owners are told to lure their dogs into a sitting position and then say “sit” when the dog’s rump touches the floor. If using lure training, I suggest that no verbal cue be given until the dog is sitting reliably to the lure, and then have the owner say “sit” before beginning the luring motion.

That said, one can always find multiple examples of things they like and points they disagree with in a book this size (319 pages without the glossary and index). Overall, I’m thrilled that the veterinary behaviorists are adding their voices to the movement toward effective, benevolent and science-based training techniques. That’s why I was happy to write a blurb for the book, which is at the top of the list on the book’s back cover. I wish though, that the book wasn’t quite so relentless in its promotion of veterinary behaviorists themselves. The subtitle of the book is “The Ultimate Experts Explain Common Dog Behaviors and Reveal How to Prevent or Change Unwanted Ones.”  I have had the honor of spending time with some of the world’s top behaviorists and trainers, and I don’t know one of them who would describe them self as “the ultimate expert.” But it continues: The Introduction by Steve Dale begins with “Veterinary Behaviorists are like super heroes.” Phrases like “Veterinary behaviorists have learned that most owner-direction aggression actually stems from anxiety…” are frequent within the book, seemingly implying that, if not for veterinary behaviorists, we wouldn’t know that.

I suspect this wouldn’t be quite so notable if I wasn’t aware that a small number of veterinary behaviorists have worked to change the laws such that only veterinarians would be allowed to treat serious behavioral problems. That would make it illegal for any dog trainer or PhD certified applied animal behaviorist to work with dogs with behavioral problems, no matter what his or her background and expertise. It’s true that I have worked with many veterinarians who are extremely knowledgeable about behavior, and it has been my pleasure to exchange information with them, but the fact is that many general practice veterinarians are still pushing the “dominance” theory of training. In addition, they have had little or no training in canine ethology, learning theory, or treating serious behavioral problems with classical and operant conditioning. Which makes a law that any and all veterinarians are better equipped to deal with behavioral problems than anyone else a bit, well, problematic.

Exactly who is qualified to treat serious behavioral problems is a great question, and one I partially answered in an earlier blog. I sense another blog coming on in the near future: With all the certifications and multiple letters behind people’s names now, how does one decide where to go for help? I’ll elaborate on that in another blog later on in the winter. But for now, kudos to the veterinary behaviorists for working so hard on Decoding Your Dog. I just hope they can get all of their veterinary colleagues to read it.

MEANWHILE, back on the farm: We are back on the farm now, after a two-day getaway to the canyons of Palm Springs. A few weeks ago I got a bee in my bonnet (gotta love that phrase) and decided I needed a break from winter. Thirty minutes later I found some crazy-cheap airplane fares on Hotwire and a wonderful place to stay on Yelp. We arrived at midnight Friday night, and left at 7 AM Monday morning, so I’m not kidding that it was a two-day getaway.

We went to Palm Springs because it is so reliable sunny, and because we’d heard about the beauty of the Indian Canyon hiking trails just south of the city. We spent much of Saturday hiking in and out of Palm Canyon, whose oasis of running water and ancient palm trees was even more remarkable given their contrast with the drought-dry brush of the surrounding hills.  The drought is in full evidence in the area, and it was hard to see all the vegetation outside of the canyons either dead or dormant. But that made the canyon even more special. Here is Jim in Palm Canyon, illustrating the scale of these remarkable, native trees: 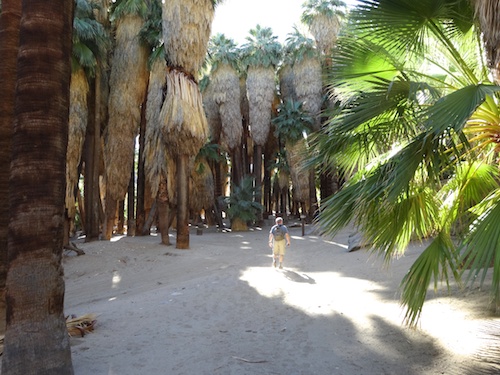 More news: I’m working on a new book. I predict it will be a smash, because it is a diet book, and don’t all diet books turn into best sellers? Here are some of my suggested eating plans, based on our weekend away:

That’s what I ate, and I lost two pounds.

Of course, it could it be hiking my ass off (who knew that phrase was so literal) in between all the eating that had an effect. We only went about five miles each day, but there was lots of up and down on each hike. On Sunday we hiked straight up a mountain that went up and up and up, and about halfway to the top I stopped and considered calling in a helicopter. You know, the kind that hovers over head while a guy who looks like Daniel Craig descends on a wire and encircles you in his manly arms and lifts you to safety. (Or should that be in a different book: “Animal Behaviorist begins writing bodice rippers…”)

In reality, I had my own handsome hero by my side. Parts of the trail were so steep that you simply had to use your hands, especially when you take the wrong turn and end up pondering the difference between rock climbing and “hand hiking.” A bum wrist made it impossible for me to use my right hand to clamber up the rocks, and so when needed, Jim pulled me up by the other hand or I might not have made it. If memory serves, there was an occasional push from behind too, but we’ll keep that part to ourselves.

Here are some more photos from our hikes, and our truly wonderful reprieve from the cold and snow. I love Wisconsin, and I love winter, but I wouldn’t mind if it was just a little shorter and a little less brutally cold sometimes. (It has remained extremely cold here, 14 below this morning, highs in the single digits, but on Wednesday it is predicted to get up to the 20’s. People will be outside in shorts. Seriously. Note that the collective term “people” does not include me in this case.)

Love this cactus, perched on a cliff overlooking the canyon. 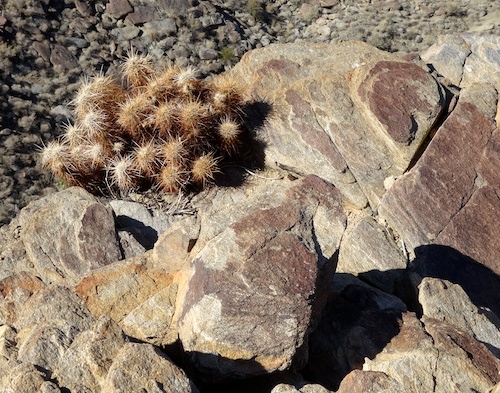 The person in the photo isn’t Jim, it’s a young man who “hiked” the trail at a youthful lope. Oh my. My camera caught him just as he was about to run over the hill. He gave me yet another excuse to stop and catch my breath. Good boy, good boy. 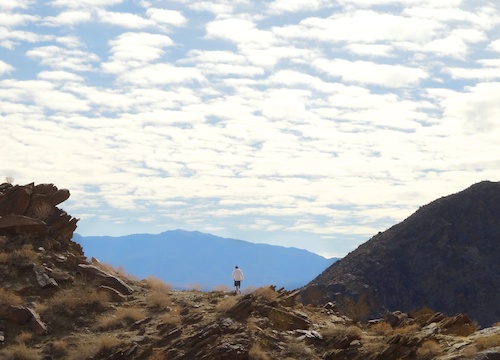 « Adopting a Dog Into a Multi-Dog Household
Small Dog Privileges? Yes or No? »