Welcome to an ongoing inquiry about the behavior of people and dogs.
Blog Home >> Canine Cognition >> Do Dogs Recognize our Facial Expressions?

This is a great question, one that none of us really know the answer to. Of course, it actually includes several questions: Do dogs learn to associate a smile with good things? Or a frown? And/or are dogs inherently able to “read” our faces because their expressions are so like our own? Or, do none of our expressions have any effect on our dogs? Do they take cues about our internal states and future behavior from other clues, our voices, our posture?

A friend and colleague sent me information from the just concluded Canine Science Forum in Vienna (thank you Julie!!!) about a study done on that very topic. Anais Racca, from the University of Lincoln in the UK, showed 21 dogs 6 images, two each of a person and a dog looking “negative” (we’d call the human’s face angry), “neutral” and “positive” (classic smiling-faced human, open-mouthed, slap-happy dog). They measured what’s called a “Laterality Index,” or how often the viewing dog’s eyes went left, right or stayed on center. In human research, there’s a suggestion that more negative emotions are processed in the right hemisphere (or left eye) and vice versa.

Their primary question was whether the dog’s would respond similarly to the expressions of the people as they did to the dogs. A summary of their conclusions was that the dogs were more sensitive to the facial expressions of their own species (not surprising) BUT did show different responses to “positive” versus “non-positive” (negative and neutral) expressions in both humans and other dogs. Interestingly, they noted that prototypical “neutral” faces in humans are still evaluated in a negative way (cold, threatening)–thus we tend to lump “neutral” in a similar category as “negative,” and so did the dogs.

Of course, this is a small study, and there are all kinds of issues that it brings up, but it is interesting as far as it goes. Based on my experience, it appears to me that many dogs are adept at reading human facial expressions. Just like people (who we know from Paul Ekman’s research vary greatly in their ability to ‘read’ faces), some dogs are a lot better than others.  It would be great to see a study that continued the one above, and that also tried to tease out learned versus inherently correct interpretations of the facial expressions of another species–us.

I’d love to hear what you think… have you had dogs who seemed much more attuned to your facial expressions (or other indicators of mood or future behavior)? If you say yes, tell us how you think you can separate your facial expression from body posutre, voice, etc etc. Just to get you started, I’ll mention that I call Willie “Trisha’s mood ring,” but I suspect much of his response is based on extremely subtle changes in my voice. As soon as I’m done here, though, I’m going to go smile at him!

On another note, I had a great time spending a morning at the Int’l Society of Human Ethologists. Wish I could’ve spent more time there. I especially enjoyed a talk about how people perceive facial structure… (turns out that wider faces, measured at the top of the cheekbones, are considered less trustworthy than more narrow faces. Love this kind of stuff!). I had to leave before a study about the benefits of bringing dogs to the workplace, darn, but will try to contact the author of the study directly sometime in the future.

Meanwhile, back on the farm: It’s hatefully hot here, I feel so sorry for my sheep. No air conditioning for them. It’s making exercising the dogs rough, I’m not good in hot, humid weather, and neither is Willie (he had a heat stroke one summer when I was out of town, and like many dogs, he’s never been the same–though he was always especially heat intolerant. But then, so am I. Me and Willie: peas in a pod.

Here’s Hope and Will playing chase a few minutes ago. Look at Hope digging in to try to keep up. Wow can that little dog haul . . . 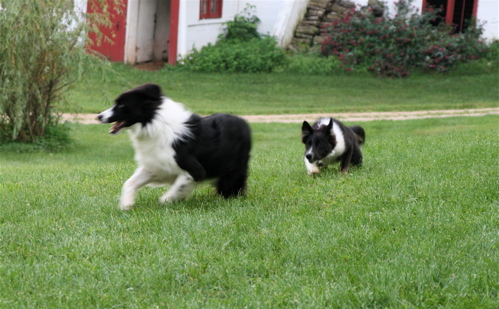 Needless to say, I didn’t let them play long. Here’s where they ended up after just a few minutes: 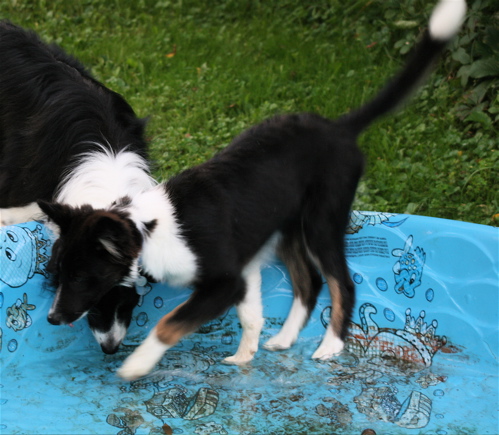