Welcome to an ongoing inquiry about the behavior of people and dogs.
Blog Home >> Animals and the People Who Love Them >> Dog Parks: The Controversy, and Out of Africa Part II 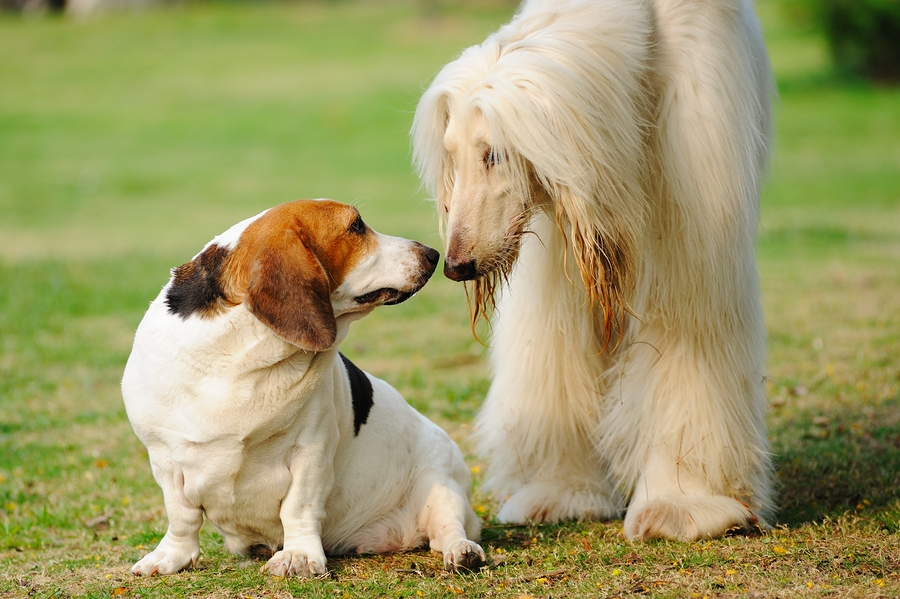 Dog Parks. No controversy there, right, about the good, the bad and the ugly of them? However, the pros and cons of dog parks are usually discussed inside the dog world, not in a national news outlet like the New York Times. But the Times jumped into the fray, with an article provocatively titled The Dog Park is Bad Actually.

The article points out problems that can be found in dog parks, problems that many of us are well aware of: They are lousy places to “socialize” young puppies, they may contain dogs who are not necessarily aggressive (although that too is possible), but are playground bullies who terrorize other dogs like some nasty kids on a playground, they have the potential of spreading disease, there is usually no separation between small and large dogs, which can cause injuries or dogs being frightened (see “playground bullies” above) and can contain owners wh0 are oblivious to important social signals between dogs that signal discomfort, downright fear and/or hard-eyed aggression.

Here’s a concluding sentence from the article:

“Ultimately you’re the only one who can determine if the risks outweigh the benefits of dog parks, but there is no shame in not surrendering your dog to what has become the quintessential urban dog experience: running with dozens of strangers in a small, smelly pen as people stand by, looking at their phones or gossiping. Make the time you have with your dog meaningful and enriching; after all, your dog wants to spend time with you, too.”

Soon after, Bark Magazine came out with a counter to these arguments titled Dog Parks Can Be Great Places for Offleash Activity. Here’s part of what they have to say, after agreeing that parks could be better monitored and that yes, some parks have problems:

But we take issue of the tone and heavy-handedness of this article—the main takeaway is that dog parks are teaming with dog fights, careless owners and rife with disease! That has not been our experience. In fact, despite at times the presence of an irresponsible owner and unruly dog, most off-leash areas we’ve frequented for three decades are relatively incident free. 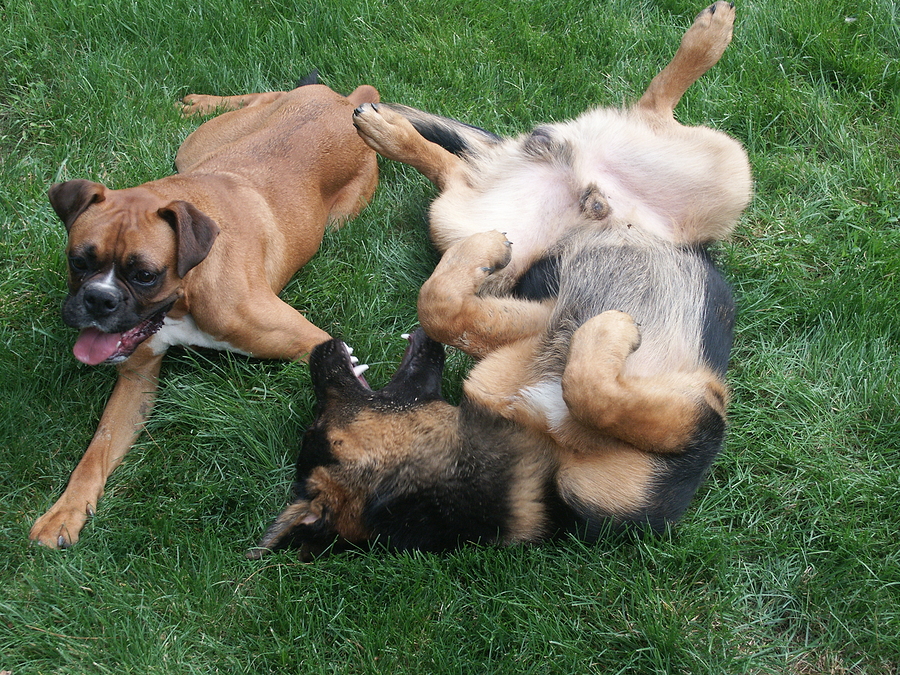 I’m curious about your experiences. Full disclosure is that I have few objective opinions, because I, and my colleagues, only see clients whose dogs have either created problems at a dog park or suffered from them. No one ever came to me because their dog loved going to the dog park and never had any problems at one. Of course, I’ve been to many in Wisconsin (with clients) and have indeed seen lots of healthy play and behavior, as well as cases of problematic dogs and oblivious owners. I can say that 1) I’m not a fan of small ones, especially with a single entry gate that allow entering dogs to be swamped, 2) I have strong feelings about how they should be designed (large, double entries, rules that keep people from playing by the gates, owner education efforts to name a few, 3 There are lots of dogs I’d never take to a park (Maggie would crumble into pieces at one), and 4) The dog parks I visited with Luke and Lassie around San Francisco (Bark’s home field), when I lived there to do my Animal Planet show, were full of some of the best behaved dogs I’ve seen. I should also mention that I am very lucky: I live in the country with large, fenced areas for my dogs to play, and nearby areas where a well-trained dog can be safely off leash. I know of many people who love dog parks, and have had nothing but good experiences there. And you? I’m all ears.

MEANWHILE, back in Africa: So much to say, so many photographs. The photo’s today are from the beginning of our trip. We went to the Giraffe Center on our first day in Nairobi, which protects and breeds the endangered Rothchild’s Giraffe. There are only about 1,600 left in the wild, and the center has re-introduced up to 40 giraffes into wildlife parks. Giraffe are hands down one of my favorite African animals. Watching them glide across the plains, seemingly frictionless, is one of the most beautiful things I’ve ever seen.

Besides supporting their conservation efforts, visitors get to hand feed the giraffes. Some are docile, others enjoy bashing your head with their own (their primary method of fighting). Along with being in complete and total animal rapture, I loved that we were treated like rational adults who would (or would not) listen to the keepers who warned us about certain animals. But mostly, I loved having their massive heads–the size of our torsos–floating down toward us, followed by their long, purple tongues curling around the treats we fed them. Here’s me and good friend Donna feeding an adult female. (Do you love the “Do not climb up the wall’ sign?) 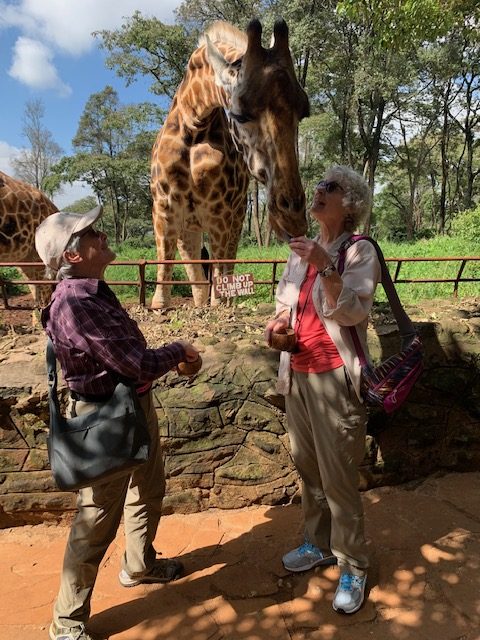 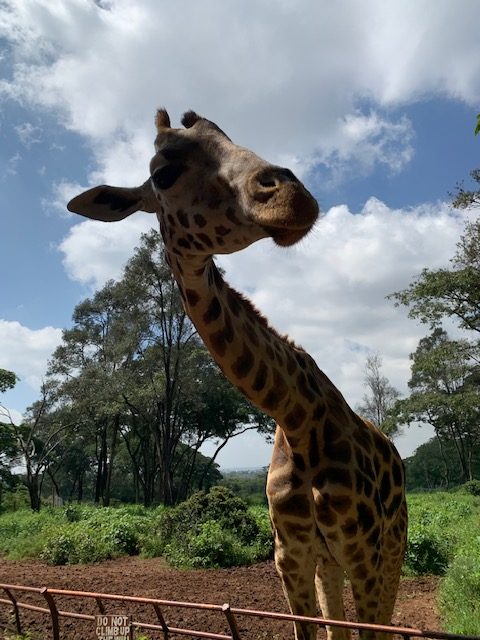 Next we visited the Sheldrick Wildlife Trust, as known as the Sheldrick Elephant Orphanage. Injured and orphaned elephant babies come to them from all over East Africa, where each individual is rescued, medically treated and then raised up to an age in which it can be integrated into a wild herd. The trust has raised 260 orphaned elephants, and has an extensive conservation program of field veterinary care and anti-poaching efforts. The babies are never alone (their keepers sleep with them at night), they are taken out several times a day on walks into the bush, and are given mud baths in front of visitors whose entry fees help support the work of the trust. It’s an amazing enterprise, and something we were honored to support. For an extra fee visitors can adopt an elephant, and I adopted Zawadi. Click on on her photo to watch an amazing video of her rescue, and her battle with what appears to be epileptic seizures. If watching her story doesn’t make you all gooey, I don’t know what will.

Here’s an overview of the visitor area when some of the babies are starting to get their milk. The elephants are brought back from a walk in the bush with keepers, and then fed their morning milk and given mud baths in front of visitors. 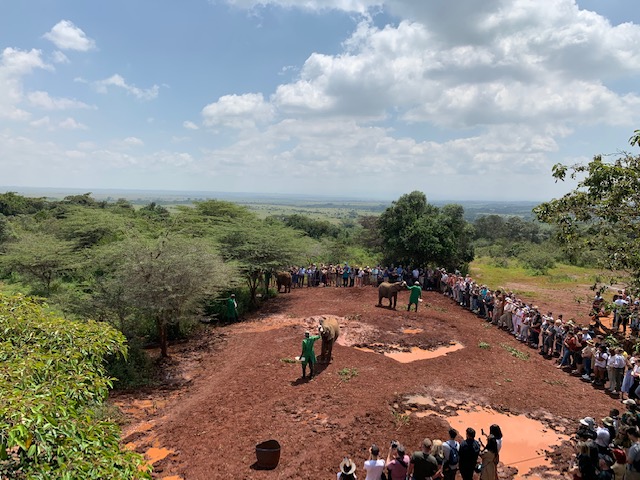 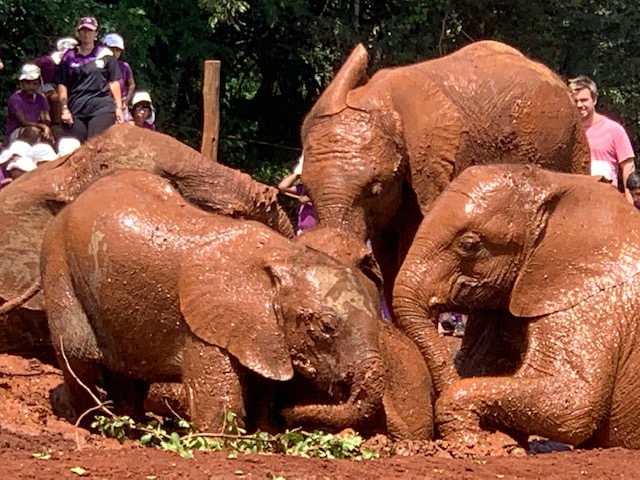 At night the elephants stay in individual stalls, each with their own keeper sleeping with them. The dedication of the keepers is truly something else, not to mention the work involved in introducing individuals back into wild herds. (They do months of parallel walking alongside herds they know to be accommodating, almost like introducing two dogs to each other.) I don’t know how many efforts are successful over all–I imagine that it’s inevitable that some don’t work out. But their record is impressive. If you get to Nairobi, I hope you can stop in to support their efforts. (Of course, you don’t have to visit to support their work!)

The next day we drove to the Samburu National Park, a park full of rare and endangered species that is rarely visited. We stayed at Larson’s Tented Camp and I wish we could have stayed a week. Here’s the view from our tent at sunrise: 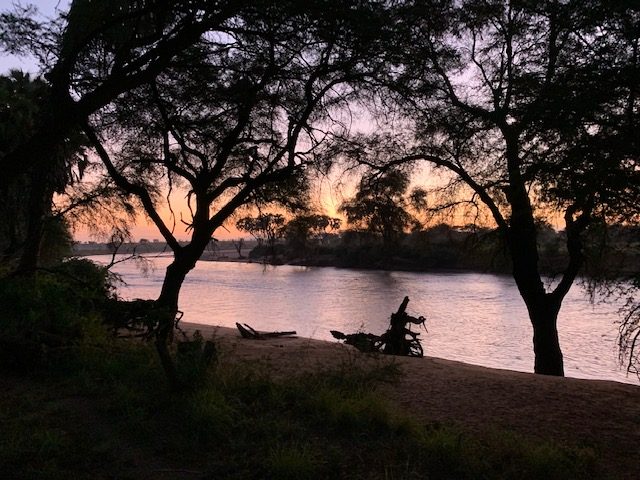 I absolutely loved this camp. The setting was gorgeous, we were surrounded by wildlife (you had to padlock the zippers on your tent to keep out the vervets and baboons) and the staff members were kind and generous. As I did at each place we stayed, I stayed back from one game drive and spent some quiet hours by myself, just me and the vervets, the birds and the river. I also had a lovely time speaking with a staff member about his life, his family and what it was like to work in one of the tent camps.

I showed this photo last week, but repeat it here in context, when it was just me and the vervets at Larson’s camp. I watched this female and her babe for over a half hour. At one point her baby did something she didn’t like, and she took it by the shoulders and shook it. I had to stop myself from laughing out loud. 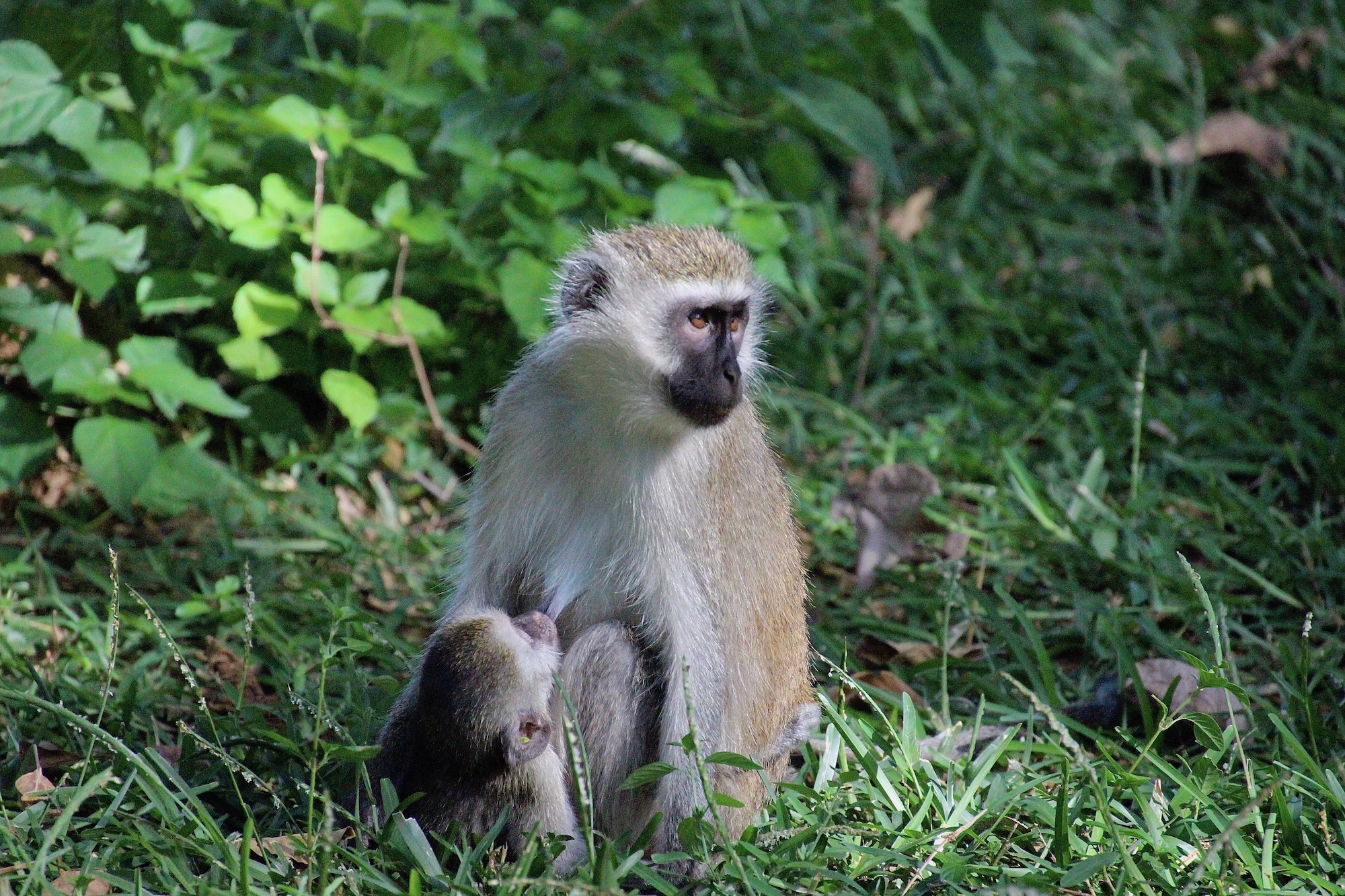 Here’s what else happened while everyone else was gone–the vervets pretty much took over the dining room: 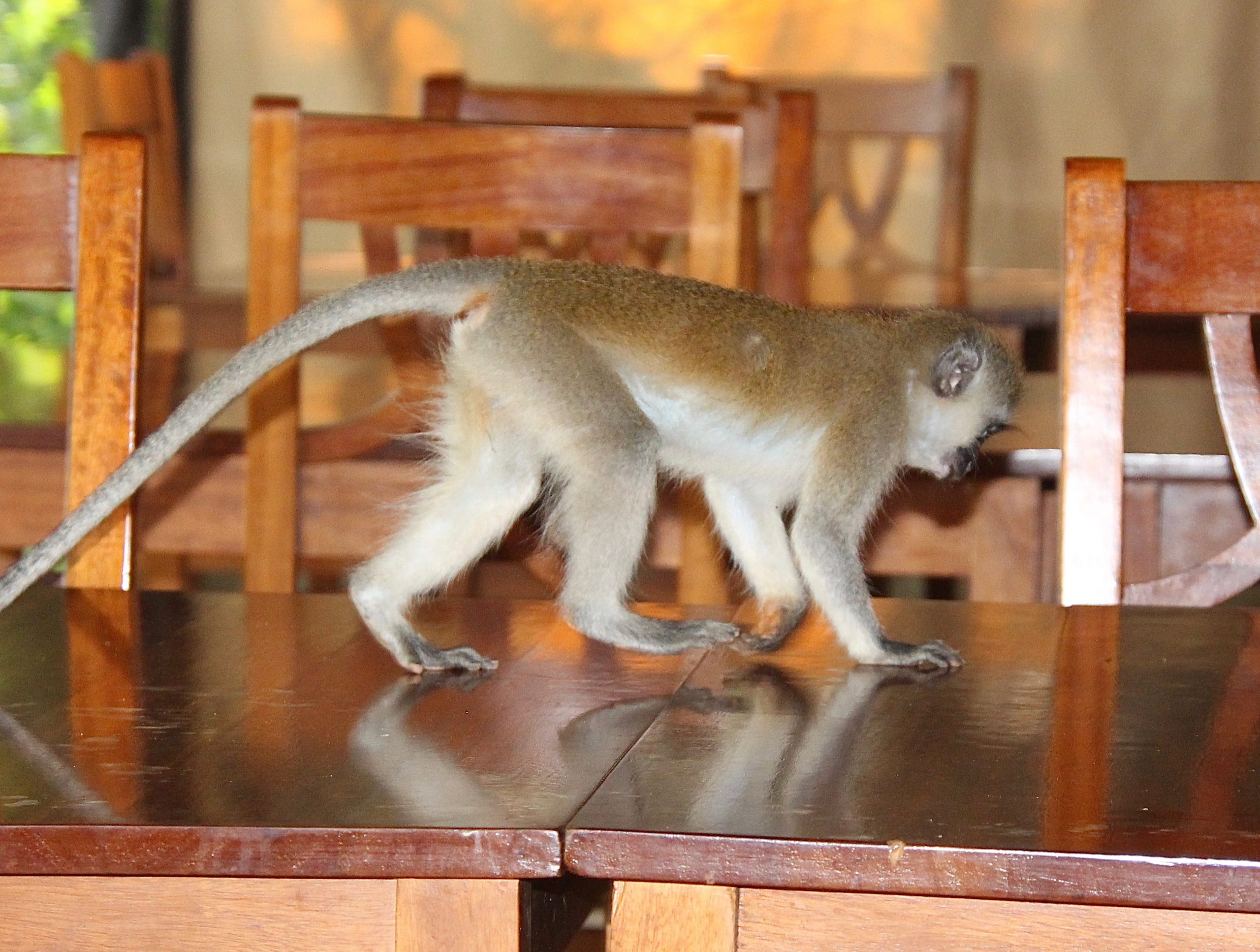 The photo below shows one of my favorite African animals, one who you can only see in the dry areas of Kenya, Somali and Ethiopia. Gerenuks are also known as the “giraffe gazelles”, for obvious reasons once you look at their long necks and feeding methods. They are adapted to feed on leaves lower than giraffes usually eat, but higher than other ungulates. They’ll stand like this for long periods of time snacking on leaves. They are so well adapted to dry areas that they can go long periods without drinking, and in some cases, barely drink water at all. What I especially love about this photo is that we only got it because our van (which included me, Jim, good friend Donna, and Jim’s son Zach and partner Sarah, as well as the best driver/guide in the universe, Eric) agreed to sit and wait. Gerenuks are relatively flighty, and it took a good 15 minutes for them to relax enough to begin to feed. Kudos to our van and driver for agreeing to wait! 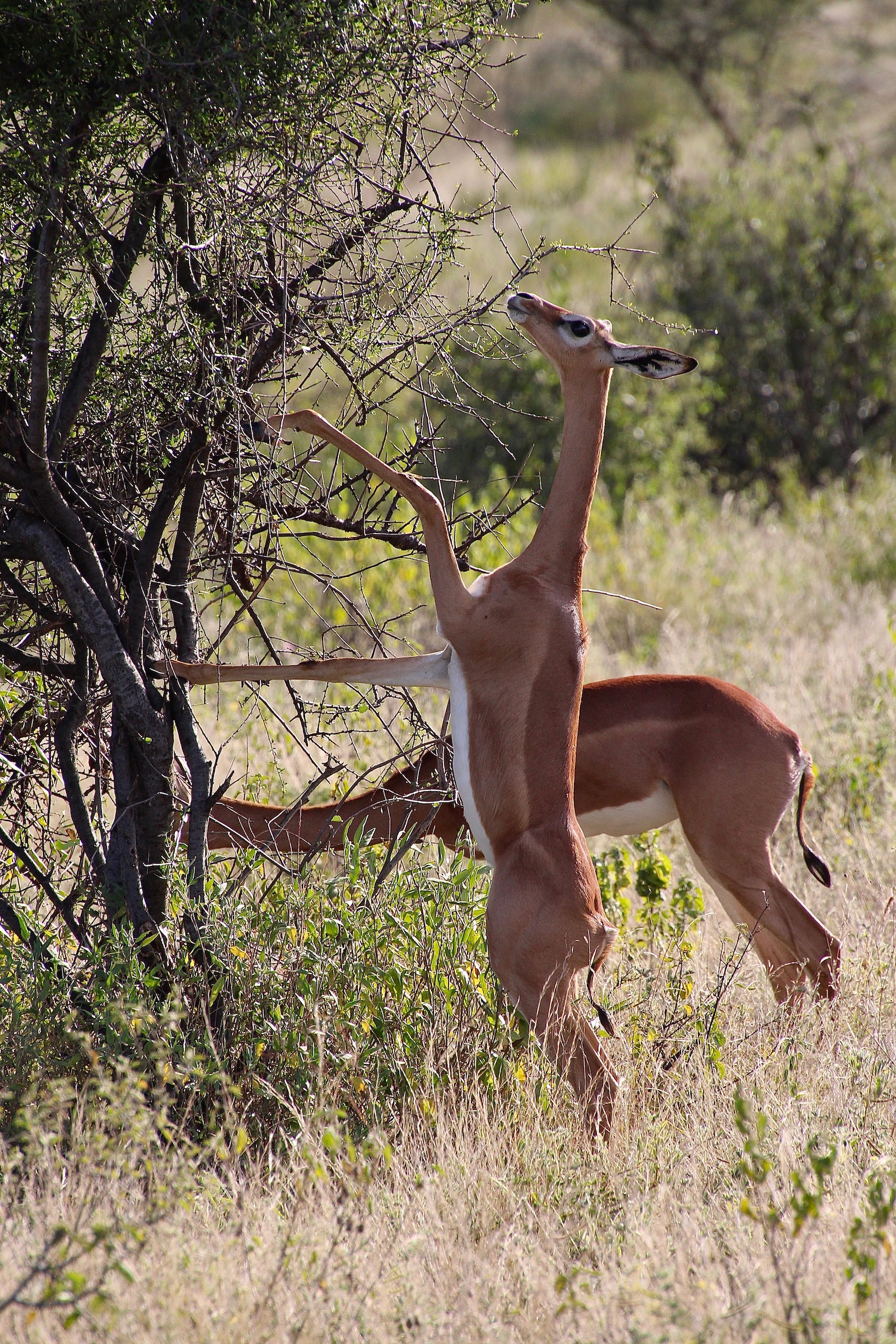 Another rare animal we got to appreciate was the Grevy’s Zebra, the zebra that I’ve argued was created by a graphic designer. They too are adapted to dry areas, and like the Reticulated giraffe (who also live in Samburu), are highly endangered. There are believed to be only 2,000 Grevy’s Zebra left in the universe. 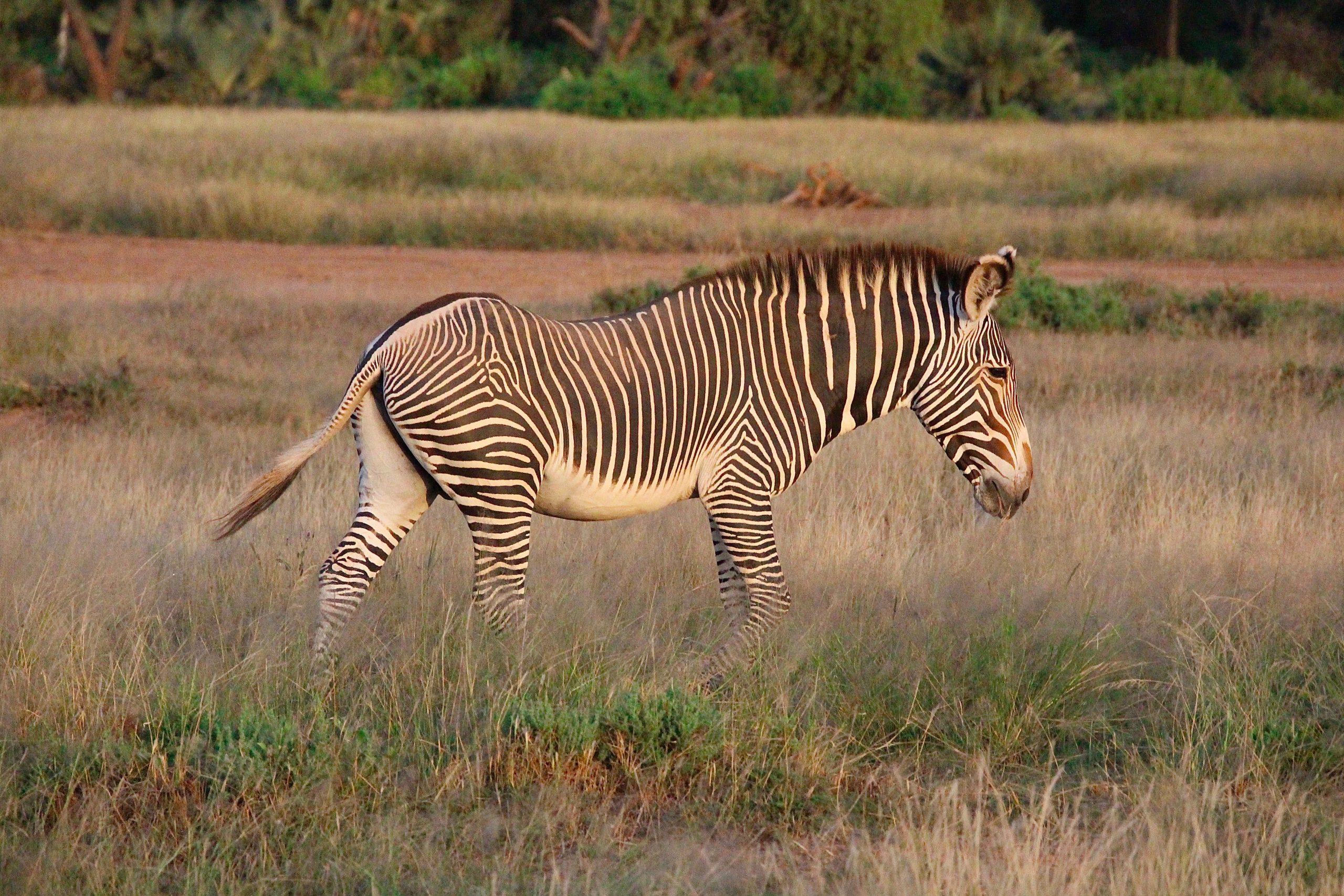 Here’s a Common (and very pregnant!), or Plains Zebra for comparison: 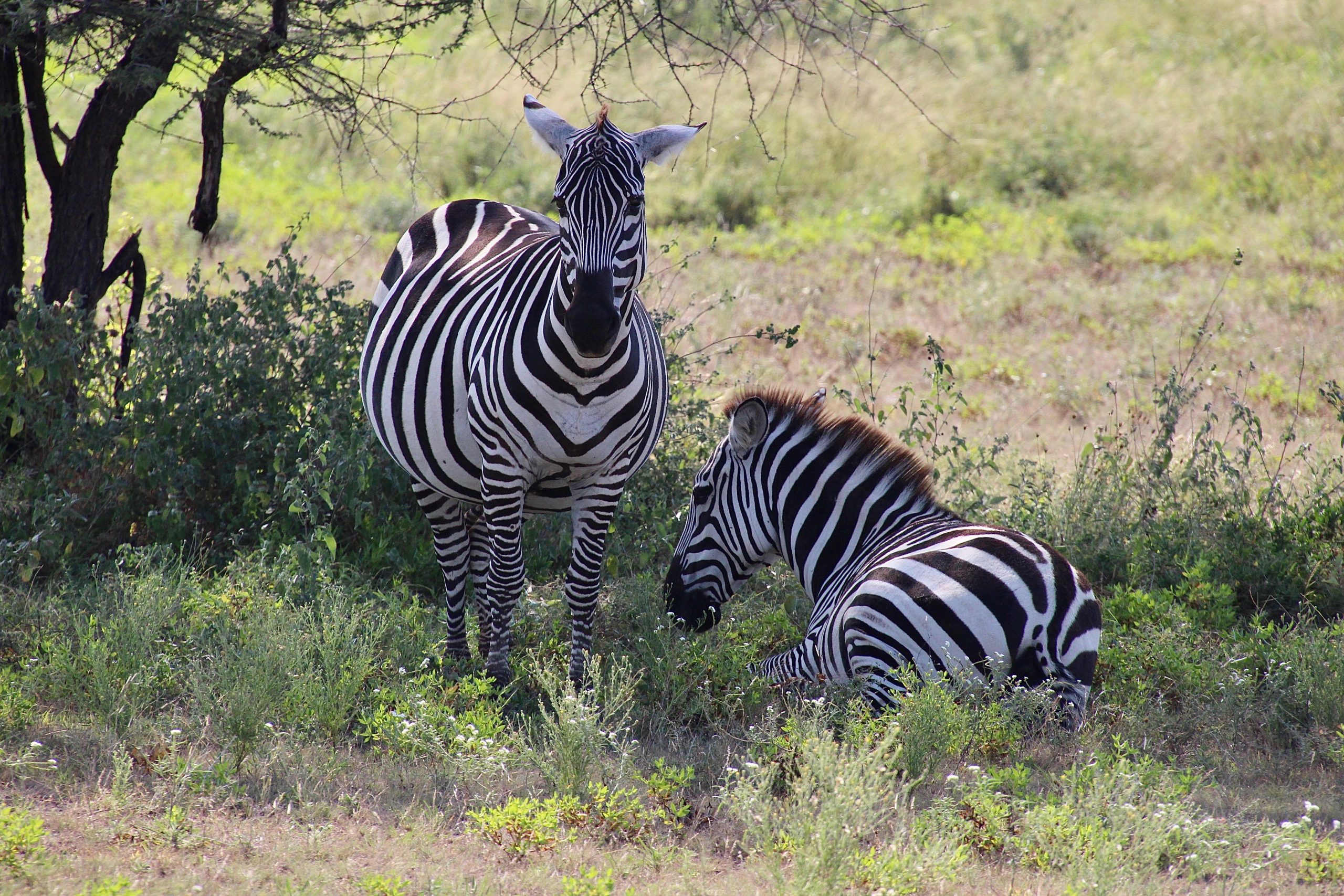 And the elephants! There were large, healthy herds of elephants at Samburu. Here’s a momma with her one or two month old baby, with what is probably one of her older daughters beside her. We were charmed over and over again by the elephants, as well as being put into our place by a matriach who charged our van, ears flapping and trunk trumpeting. We felt badly that we had disturbed her (our van was fine but she became agitated when another van pulled up along side), and obediently followed Eric’s instructions to stay motionless and silent. She came within a few inches of our van, peered at us for a moment (we weren’t just still and quiet; I think we had all stopped breathing) and slowly turned away. 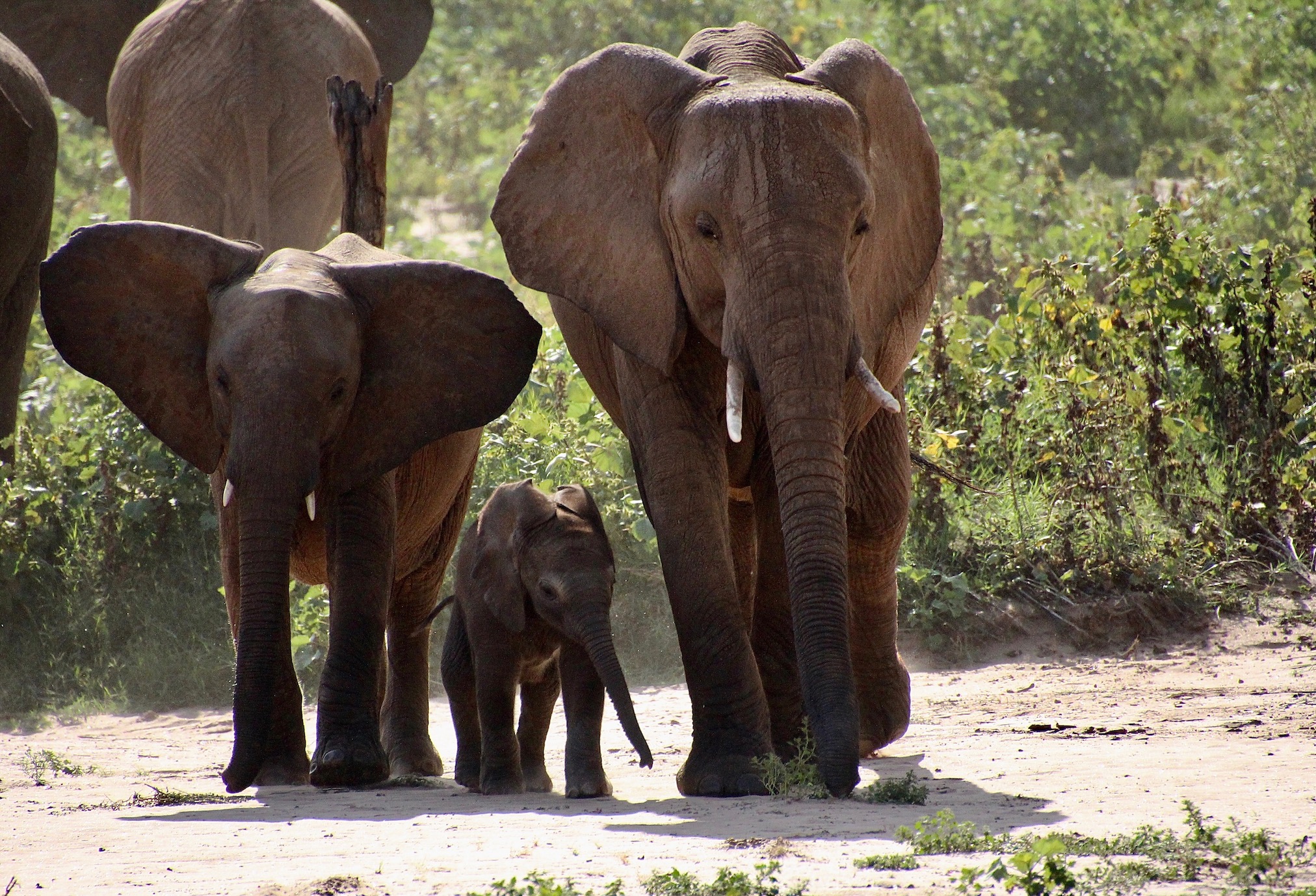 And I haven’t even mentioned the birds yet! Ah well, more photos in the weeks to come. Please forgive me if you get sick of them. It’s just too much damn fun to post them!