Welcome to an ongoing inquiry about the behavior of people and dogs.
Blog Home >> Animals and the People Who Love Them >> Dogs and Hugs, Revisited

Dr. Stanley Coren, psychologist and blogger for Psychology Today, recently discussed his research on the observation that dogs, in general, don’t like to be hugged. Predictably, the fur hit the fan. As I found when I went on tour for The Other End of the Leash, some people do not appreciate that their dog might not enjoy being hugged. At first I was blindsided, especially when the host at one radio station was so angry at the idea, he could barely snort his way through the rest of the hour-long show. But I got used to it, and learned to explain that it didn’t mean that their dog didn’t love them… just that we all have different means of expressing love.

Coren’s post has raised the issue again, in which he decided to see for himself if he could find clear evidence supporting the belief that most dogs don’t like hugs. He googled “hug dog” or “love dog” and scored 250 photographs on whether the dogs showed signs of stress while a human’s arm was wrapped around them. 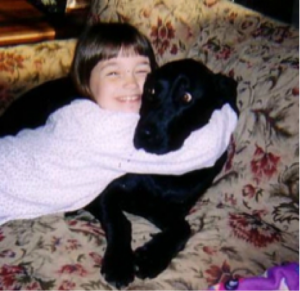 He found that, based on signs like tongue flicks, “whale eye,” or a tight closed mouth, 81.6% of the photos showed dogs with at least one sign of stress, 7.6% looked “comfortable,” and 10.8% looked neutral or were scored as “ambiguous”. From this he concluded that yes indeed, in general, dogs find being hugged somewhat uncomfortable.

Some comments supported his observations, while others objected. Some objections were thoughtful (camera effect?). I’d add a few caveats , such as it would be best to have someone else score the dog’s expressions, and we really can’t be 100% sure we “know” what internal state matches with an expression. Other comments were, well… it’s the internet, enough said.

I couldn’t resist adding a more few thoughts to this ongoing conversation: First, based on the comments I’ve heard for over a decade, we need to be very specific about what we mean by “hugging.” Yes, your dog may leap into your lap and kiss your face, cuddle against your neck and beg you to rub her belly. But that’s not “hugging.” In my experience, many dogs don’t enjoy having a human move one or two arms around their shoulders and squeeze.  That’s the hug we are talking about.

Second, hugs from friends are different than hugs from strangers. My husband is just about the best hugger in the entire world, but if he walked up to you on the street and threw his arms around you as a stranger I suspect you wouldn’t react like I do when I hug him goodbye in the morning.

Third, hugs may be tolerated some times, and not others. All my dogs adore cuddling, and all of them tolerate hugs, but if I tried to hug the BCs when they were focused on the sheep they would absolutely hate it. As a matter of fact, I’m focused on writing this right now, and would rather not be hugged at the moment myself. Thank you for understanding.

But, oh, we so love to hug! It’s just what we do as the kind of primate that we are. Perhaps we should consider using a different term. Dogs, in general, don’t like to be “arm squeezed” or “squeezed around the shoulders.” (Is there a way to say IN GENERAL in caps verbally when talking about this issue, to make it clear that OF COURSE there are exceptions? Whoops, sorry… I’m afraid I was yelling there.) I’m not coming up with many great phrases right now. Any ideas? Or is this just a crazy idea? I await your creativity…

MEANWHILE, back on the farm: Seems like I’m barely back on the farm, after being gone for 3 days at a sheepdog clinic put on by Gordon Watt. It was a little bit like being coached by Michael Jordan or Steffi Graf, given that he’s won just about everything there is to win. He’s a great teacher too, and in spite of freezing for 3 days straight, I was in heaven. I was too busy working Maggie to get any photos of her on the sheep, but here she is looking for them in the emerald green grass of spring: 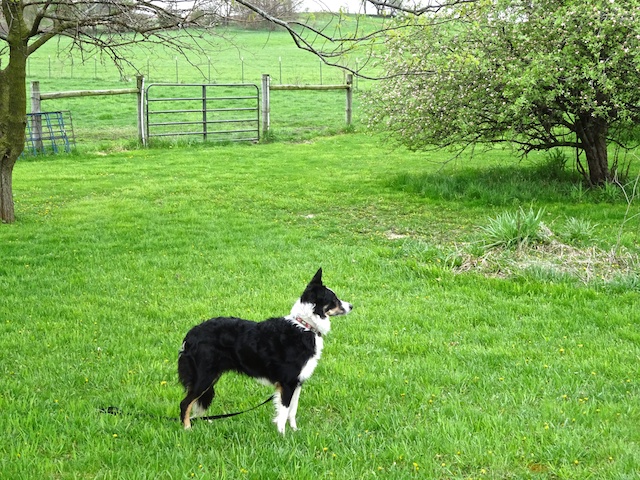 Here’s Kathy Kawalec’s Clark working on his drive. Notice how he is putting exactly the right amount of pressure on both the front and back sheep to keep them moving in the correct direction (they want to move toward you, Clark is keeping them moving diagonally away). Notice his focus on the lead sheep… that is just where it needs to be. 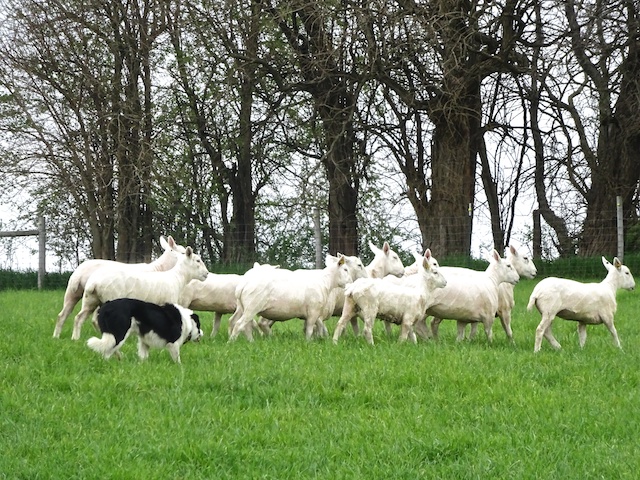 Once home in Wisconsin, this what we did Sunday–walk with hundreds of others for Puppy Up! Madison, to raise over $130,000 for interdisciplinary research on cancers that effect both people and dogs. Thanks to some amazing organizers (I’m talking to you Beth Viney and Dr. Shiu), we met our goal (not yet recorded on the website). It was a very special day, during which I read the names of all the people and dogs honored by my friends and readers who donated through Facebook and this blog. I blew bubbles like a little kid as I read the names, and the bubbles rose up into the air and–sorry to get soppy on you–took with them the love of those of us still here on this mortal coil. Thank all of you who contributed to this very special cause. 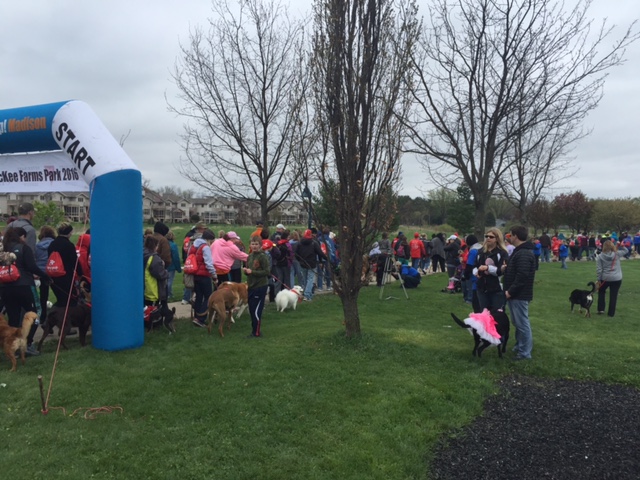 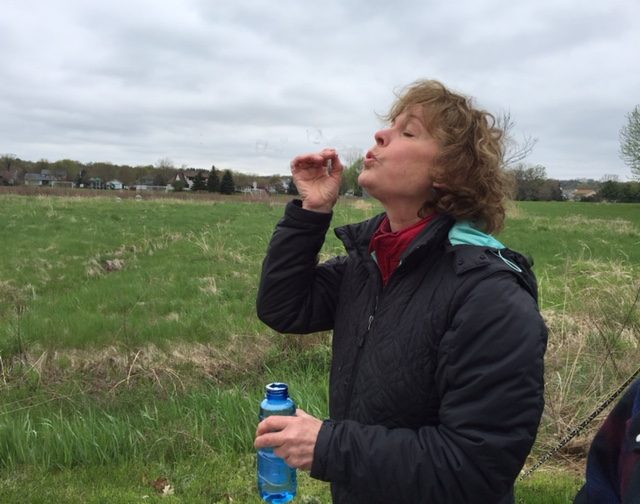