Welcome to an ongoing inquiry about the behavior of people and dogs.
Blog Home >> Animals and the People Who Love Them >> Dogs, Cats and Music. Ready to be Surprised?

Not sure what kind of music to play over the holidays? Here’s some tips: If you’ve invited Orangutans to Christmas dinner, (and who hasn’t?), they would prefer silence. Some chimpanzees like rock music better than quiet, while other chimps are more social when hearing classical music with a slow tempo. Lambs put on more weight when listening to random noises, but were calmed by classical music. Fast tempos increased locomotion and tail wagging in pigs, and pieces by Mozart reduced heart rates in hypertensive rats.

You’re welcome. I’m sure you were wondering. You might also wonder if I’ve lost my mind, but no, I’m inspired to write about animals and music after reading a fascinating article by one of my most influential mentors, Dr. Charles Snowdon. The article, “Animal Signals, Music and Emotional Well-Being” is a thorough review of the research on the effects of music on non-human animals. It’s absolutely worth checking out.

“The use of music to influence the emotional well-being of our pets, farm animals and in zoological parks depends on our understanding the communication system of other species and the variety of emotional states that can be induced through different types of music. My goal is to help those managing animal facilities or advising pet owners to be more aware of the issues involved in using music with animals, as well as provide advice to researchers investigating effects of music on animals.”

Let’s focus our attention on dogs and cats for now, given that few of us have invited orangutans for Christmas dinner. No doubt you’ve heard of music being used to calm dogs in shelters, and might have experienced this yourself. You might also be aware, though, that the studies done so far on dogs have mixed results. Some studies found that “classical music” increased sleep and rest, while “rock” increased nervousness. But other studies have had different results; one study, for example, found that listening to an audio book calmed dogs in a shelter while music did not. (See Table 1 in the paper for a full list of the effects of music on different species.)

So what’s going on? Dr. Snowdon’s primary points are these: First, we need to be careful about making assumptions regarding music. All “classical music” is not soothing. Ever heard the finale of the William Tell Overture? 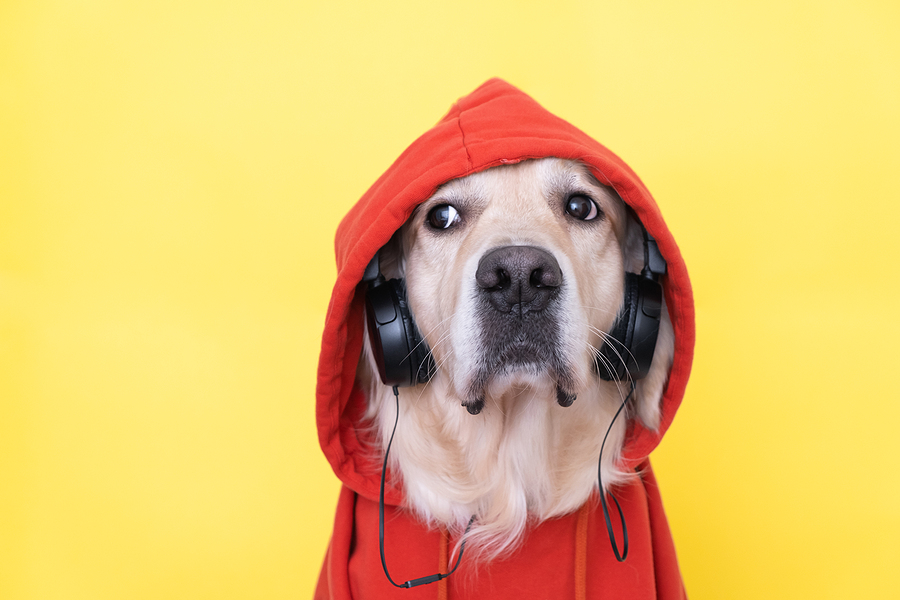 Second, there is solid research that certain types of music have similar effects on emotion and behavior in mammals, no matter the culture or the species of the listener. Quiet music with slow, continuous notes and descending pitches tend to calm mammals, while fast tempos, louder sounds, and staccato-noted pieces tend to arouse them. Thus, we call our dogs most successfully by saying “Pup pup pup!”, not “Coooooooooome.” We say “Staaaay,” rather than “Stay, stay, stay!”

But the other important point of the paper, one that is often overlooked, is the importance of understanding an animal’s own repertoire and how that might influence its response to different types of music. Here, for me, is where it gets really fun: What if one used the principles above, but more closely aligned with the sounds of an animal’s natural repertoire? 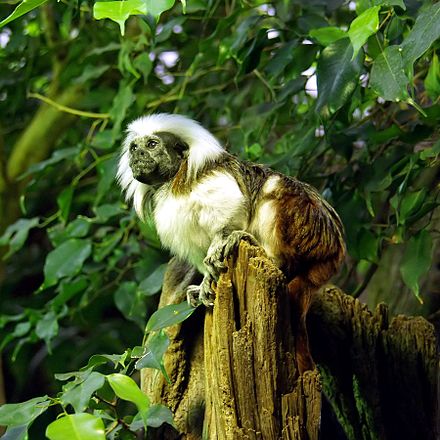 That is exactly what Snowdon and his collaborator David Teie did with Cotton-top Tamarins. A highly vocal species, tamarins have a vocal range three octaves higher than us, and a heart rate three times as fast. Snowdon and Teie created “music” that followed the basic principles listed above, but designed to be species-appropriate. They compared the reactions of the monkeys to these pieces as well as to human-based music with the same features. Sure enough, the subjects were less active and more comfortable with the tamarin-based calming music, and more active with the opposite type. BUT, they showed no observable reaction to either kind of the human-based music. (With the one exception of decreased locomotion to heavy-metal music. No comment.) 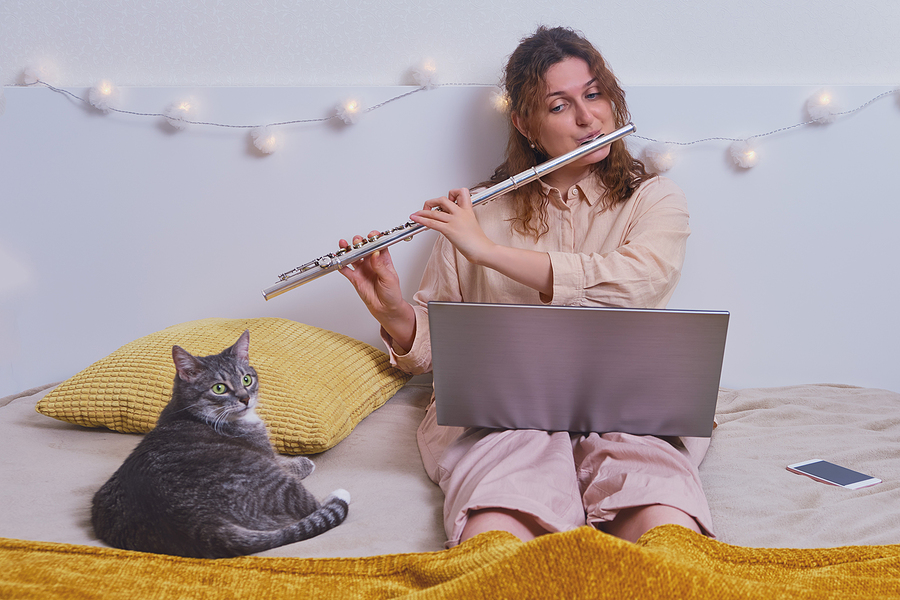 Their second study involved cats. They chose cats over dogs because their “size, heart rates and voices” are more homogeneous, composing cat-based music as they had for the monkeys. These sounds were an octave higher than human speech, included “glides” which are common in feline vocalizations, and tempos matching that of purring. The cats responded much like the tamarins: They showed great interest in the calming cat-based music, and were significantly calmer while listening to it than to human music. In addition, most importantly, one of their more recent studies compared cat music, human music and silence in veterinary clinics and found that the cat music significantly decreased stress-related behavior compared to the other choices. You can hear the cat-based music at musicforcats.com. There was no response to the human classical music, and so there appeared to be little benefit, for the cats, anyway, of playing it. (Although perhaps the humans enjoyed it?)

You can download the music or purchase CDs, from $17 to $25 at musicforcats.com/shop. It’s clearly more difficult to do this with dogs, but I’m sure you’ll join me in crossing my paws that someone, somewhere, follows up on this and create music specifically calming for dogs.

I’d love to hear your experience with music, dogs and cats; all anecdotes welcome! And don’t hesitate to add in a horse, ferret, and even better, parrots. We all know that music can get amazing responses from them!

MEANWHILE, back on the farm: Skip, Maggie and I were at a sheepdog trial on Saturday, where Maggie spent much of the morning helping to sort out sheep to be used for each run. That involved lots of close work with sheep who had strong opinions about not leaving the rest of the flock. I grabbed this shot of Maggie as she faced down a ewe who wanted to go to our left. You can see by Maggie’s legs she’d just flanked over to block the ewe. The look on Maggie’s face is so expressively Maggie: Determined, willing, but not confident. 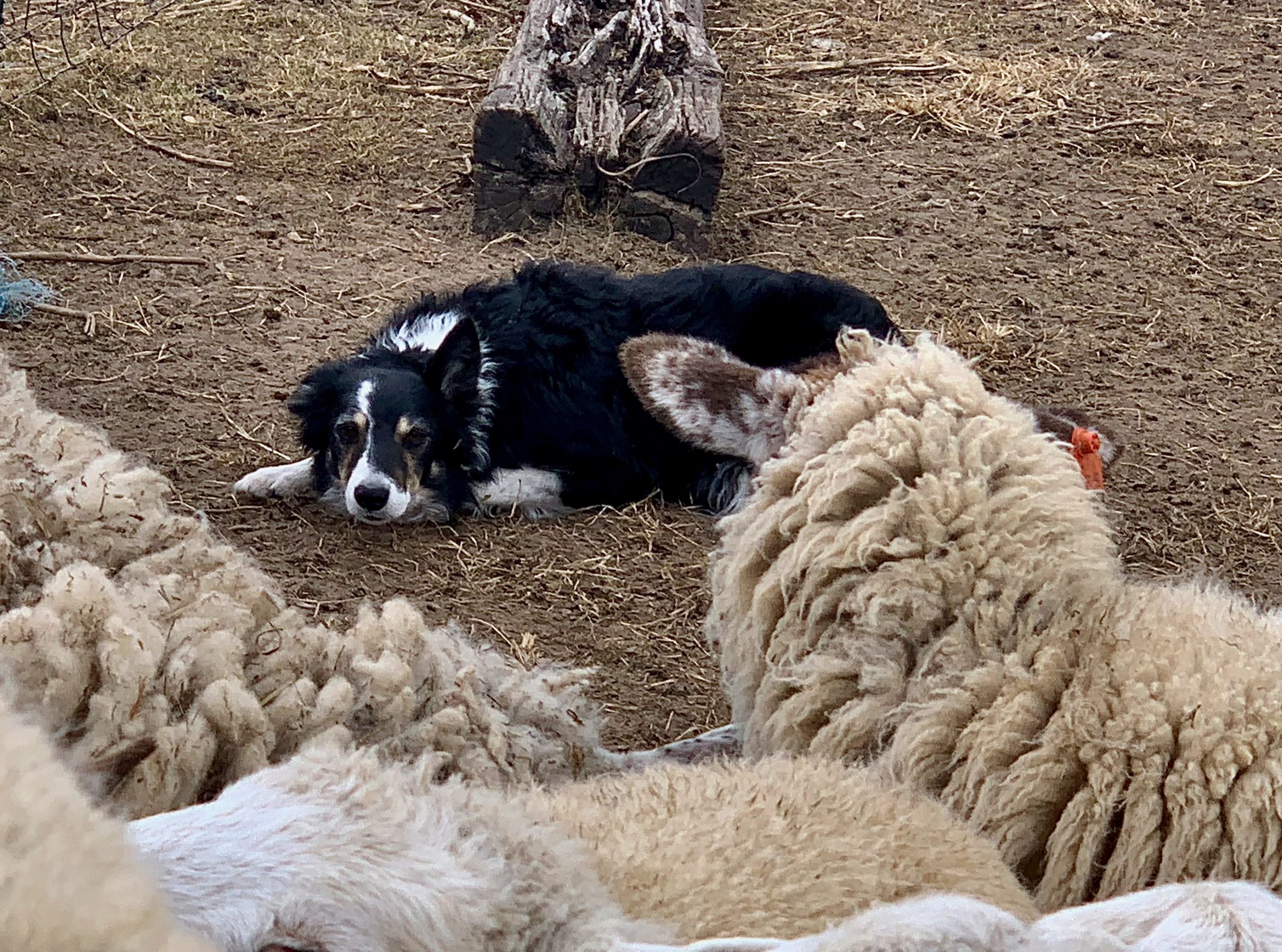 But we, working alongside Lori and her sweet dog Libby, got the job done for all the morning runs. I ran Skip and Maggie in ProNovice class that afternoon, and all I can say is I wish I had it taped, because we all need a laugh, and I guarantee it would provide one. I started laughing halfway through Skip’s run and never stopped til we left the course. In brief, I was a mental disaster. I gave Skip at least 3 if not 4 incorrect flanks. I stood watching the sheep go off line and did nothing until it was too late. I did a little better with Maggie, but it seems that my brain was frozen after working in the cold in the morning. Happily, it was a small and casual trial, everyone on everyone’s else’s side, and except for Skip no doubt wishing he had a different handler, we all had a good time.

We came home to yet another beautiful sunset; there seems to be one every evening now. Here a shot from an evening walk last weekend: 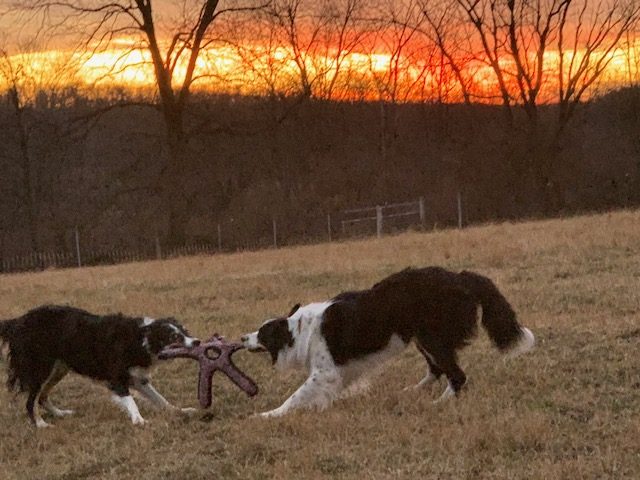 Last night, Sunday the 20th, there was a softer sunset. I managed to get this shot of Skip, looking for the sheep, before the light got too dim. This one might have to get framed. 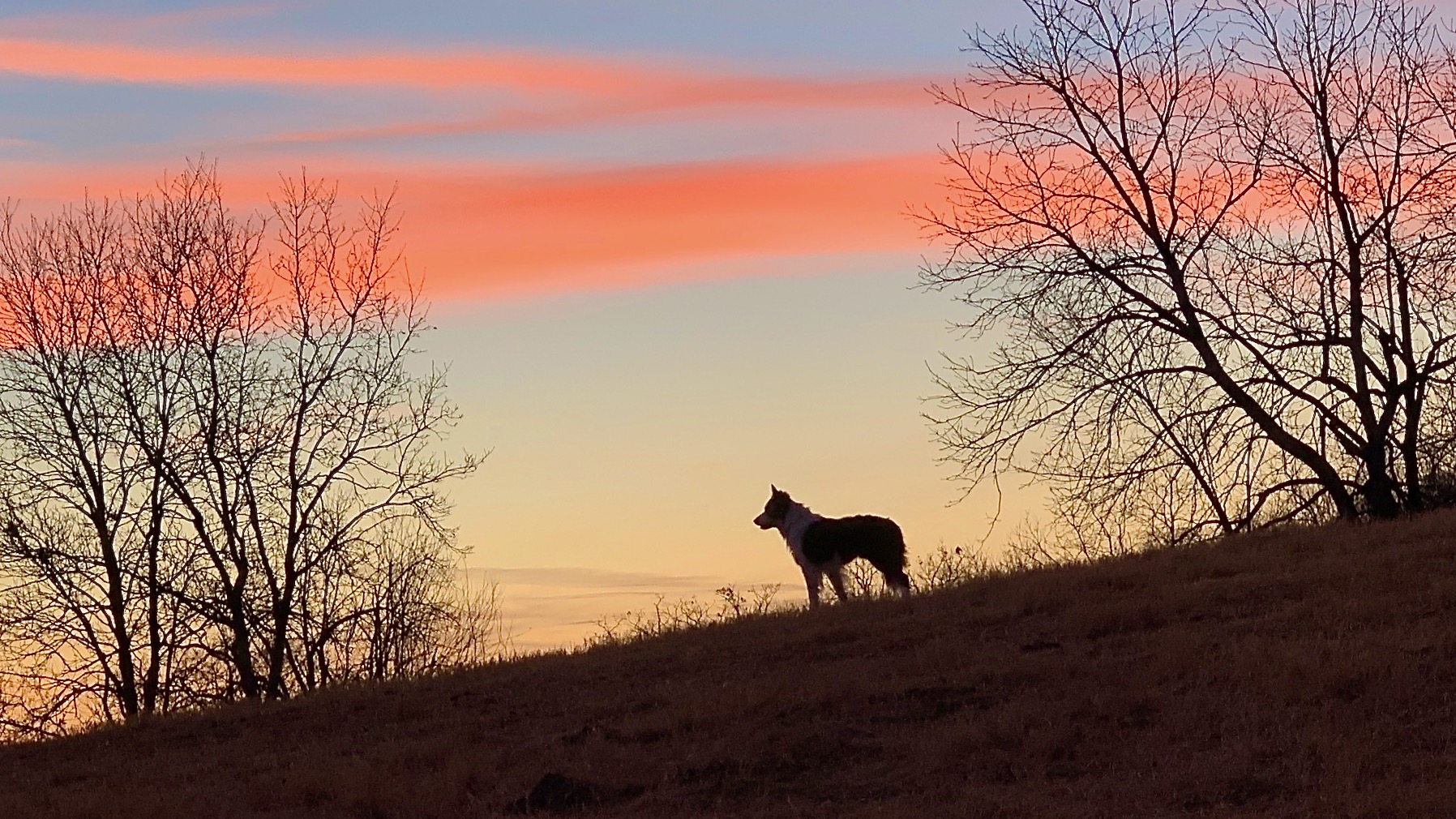 We were lucky last week after the massive windstorm that swept the Midwest. We had four trees down, but none were cherished trees in the garden, and several were already dead. This huge limb was partially down before–you can see the fresh tears by the light color versus the darker color at the base. This one was dangerous, it’s a place in a corner where both the sheep and dogs have to go to move from one place to another. They don’t call trees like this “widow makers” for nothing. Thank heavens for Jim; I hate chain sawing, he spoils me by doing it all, and is smart and cautious and wears safety equipment. 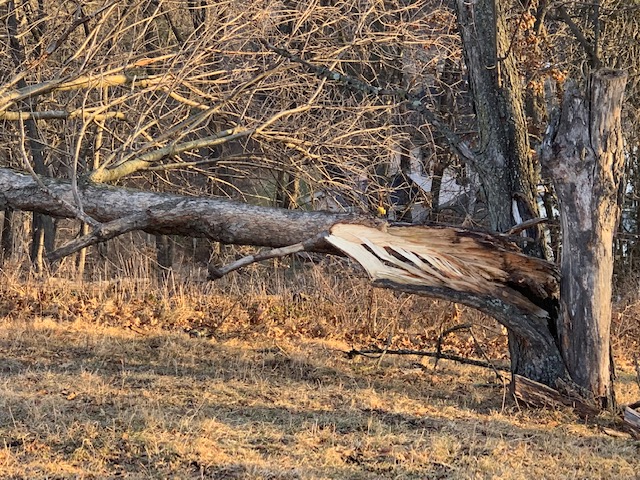 Here’s a downed tree on a fence, always a necessity to fix before the sheep get out. You might ask why there is a Blue-Footed Booby sitting on it, given that they are not exactly native to Wisconsin. It’s a long story; the short version involves my sister, her trip to the Galapagos, and my sending her a photo of Blue Booby in a different setting every day, sort of like the Travelocity gnome. 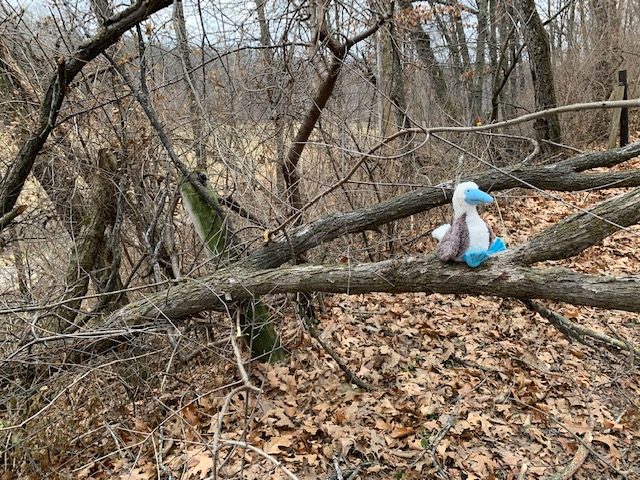 I won’t be writing again until 2022, but I hope this finds you all able to have a warm and loving holiday and end of the year. 2021 has been, well, a year. I think this ewe illustrates how many of us have felt during it. 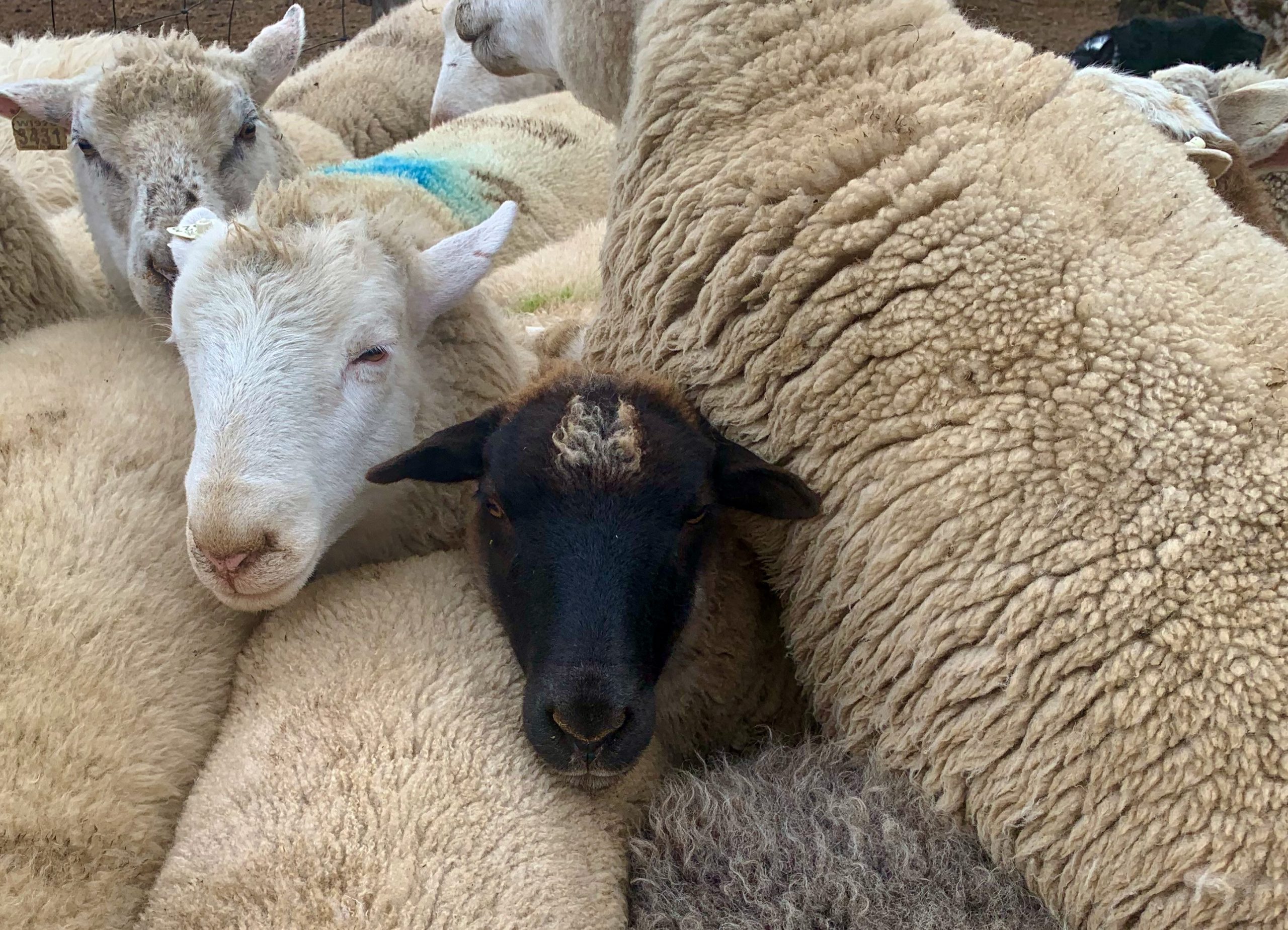 But there is always time, indeed, there is a necessity, for joy and laughter. I wish you all light and love, along with my gratitude for traveling with me on this weird and wonderful journey called life. 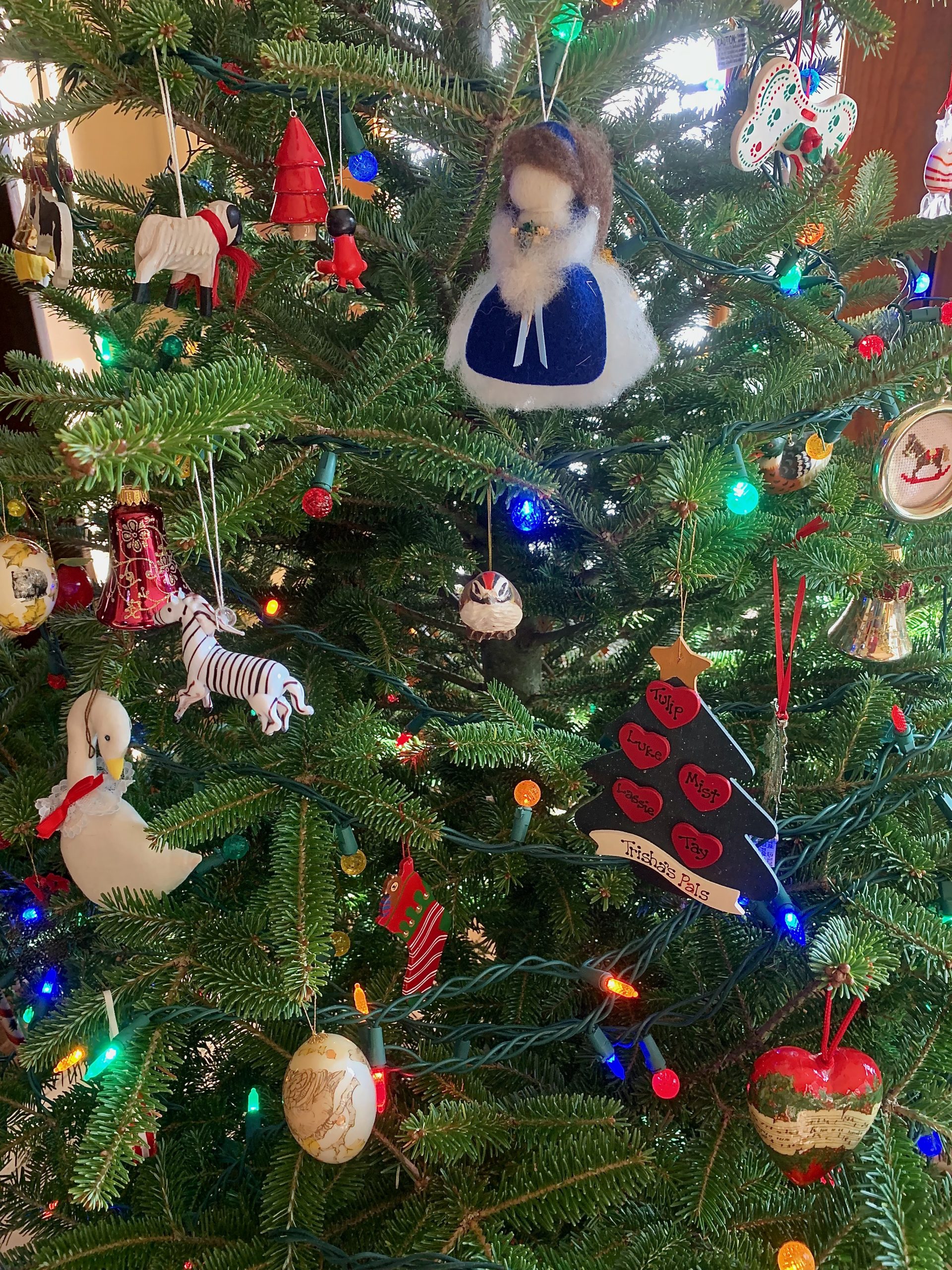 « The Best Gifts in Life are Free
Special Moments for a Happy New Year, and Happy Birthday Maggie!!! »