Welcome to an ongoing inquiry about the behavior of people and dogs.
Blog Home >> Animals and the People Who Love Them >> Excerpt from The Education of Will 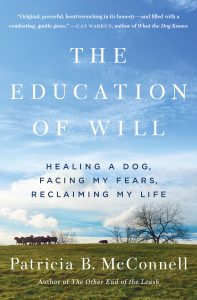 Oh my, the paperback version of The Education of Will comes out February 27th. It’s hard to imagine that one year ago the hardcover came out after five and a half years of work (not to mention lots of therapy!). I love the new version (new cover, new subtitle), hope you do too.

As many of you know, the book is about how a dog named Will taught me that will power is not enough to heal you when you are broken. As hard as it was working with Willie in our first years together, I owe him so much. Here’s an excerpt from page 120 in the paperback:

I felt sick to my stomach. How could I even think about not keeping Willie? The dog who moaned when he pressed his head against my neck; whose happy face could only be described as radiant. When Willie was good, he was very, very good, and by now I loved him as much as I’d ever loved any dog. But at his worst, he seemed miserable, living his life on the edge of terror, quick to fall into a rage so extreme he seemed crazy.

I didn’t have any of the barriers to effective treatments that my clients had. I knew how to condition dogs to assuage their fear of loud noises; I taught people to do it on a regular basis. Willie’s health-related problems were exhausting and expensive but not insurmountable. I had access to the best veterinary care in the country. I’d literally written the book on how to handle a dog who was aggressive to other dogs. I had a raft of dog-loving friends who were happy to introduce their dogs to Willie, or to teach him that unfamiliar men were harbingers of toys and treats instead of fear and danger. I’d seen hundreds of dogs who had caused serious injuries to people or other animals. One client had stitched up a long gash in her own forearm herself, afraid that if she got medical care, her dog would be taken away from her. Willie had never hurt anyone. But there was something else—something that I hadn’t allowed myself to talk about. I was just as jumpy as Willie. While his reactivity set me off, I knew that my own startle response did the same to him. We were living in a vicious circle, each making the other worse. In my heart, I knew that in spite of my professional expertise, my own problems meant I wasn’t the ideal owner for Willie.

Heartsick, I leashed Willie, and we went out the door to the car. I put him in a sit/stay behind the car while I hauled the heavy ramp from the backseat and placed it so that he could climb in without jumping and re-injuring his shoulder. It was hard for Willie to sit and stay while I lugged the ramp around. When I turned to Willie to release him, he sat big-eyed and trembling, almost overwhelmed by the energy it took to make himself obey and control his almost-out-of-control impulses. His face was desperate with the need to leap forward—to move move move, oh-please-I-have-to-move—countered by his desire to be a very good dog, the very best dog anyone could ever have.

[Awkward Note: If you have a favorite radio show, podcast or publication that you think would be interested in the book, send me an alert in the comments section and I’ll try to get a preview copy out to them. Thanks bunches.]

MEANWHILE, back on the farm: On Friday the path to the barn was so icy that I had to keep the dogs on heel every foot of the way. Thank heavens they have a good heel on them. Maggie stayed glued to my side and never took her eyes off me. She looked worried, as if she sensed something was wrong. At first Willie tried to forge ahead–he always wants to be ahead of Maggie, but soon he slowed down and we all penguin-walked out to feed the sheep. A dear friend fell last week and shattered her ankle and broke her knee cap after falling on an icy hill. The combination of rain and freezing temperatures has made southern Wisconsin into a nightmare for people who like or need to go outside. Mexico will be such a welcome relief (where no doubt I’ll worry about the dogs every hour of every day).

But there is still beauty to be appreciated here. If you have read my memoir you might remember that an important part of my recovery was finding things that made me feel safe and happy. The easiest answer was flowers–perhaps you’ve noticed how many flowers appear in my photographs in the last two years? My flower adoration/obsession continues, including my unabashed pride at getting my African Violets to bloom. I’ve had them for years without any blooms, but finally decided to get serious and moved them to what I hoped was the perfect light, started feeding them regularly and watering them from below. Voila! (Or, as I wrote once in a draft of a booklet that Dr. Karen London and I wrote, Viola! It’s become one of our favorite exclamations.)

Two of the plants have bloomed several times each, but a third hold out has grown lush and lovely, but never developed a bud. It’s the plant in the back. (Don’t miss the dog hair on the left of the reddish flowers. Don’t you think it adds something?) 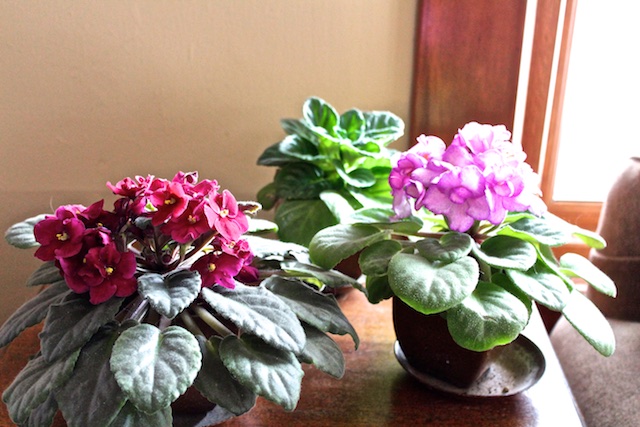 Ah, but look what I discovered this morning! 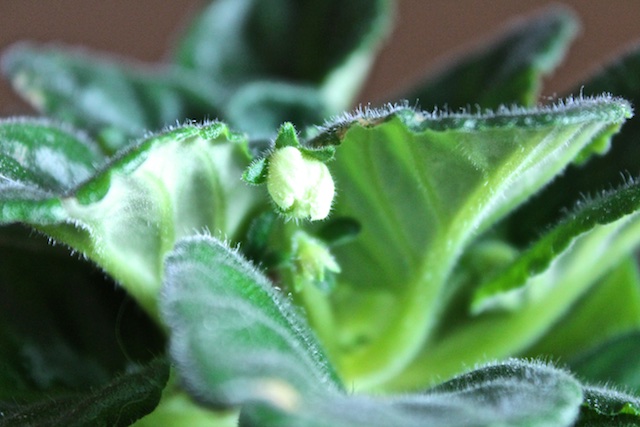 There is color outside on occasion too, here’s a lovely sunset a few nights ago: 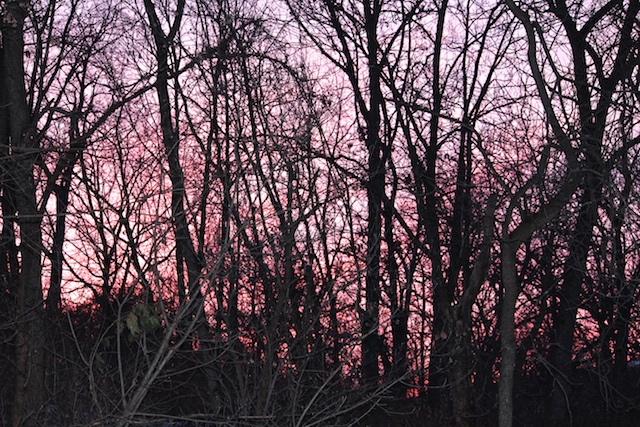 Here’s to some loveliness in your life too. I’d love to hear about it.