Welcome to an ongoing inquiry about the behavior of people and dogs.
Blog Home >> Border Collies >> Fairness in Dogs? Lassie’s Birthday Party

First things first! Lassie’s party was a joy. Many of her friends came to talk, eat and belly rub, and Lassie proclaimed it good. Very good indeed. Lassie reveled in the attention, Willie got tons of petting too and we all ate ourselves silly. Only downside is that I forgot to take photos (camera out and at the ready on the counter…) of Lassie and all her friends. Big disappointment, I have a photo of my first Border collie Drift, at his 15th birthday party, and it means a lot to me to have it. He died 2 months later and I think that’s part of what motivated me to have this one, and I’m so glad I did. However, I fully intend and expect to have a rip roaring 16th birthday party for Lassie next year, so I’ll just get a photo next year.

Here’s a picture after the party of Lassie delving into the box of yummy dog food brought by her dear friend Rick and his GSD Ava. 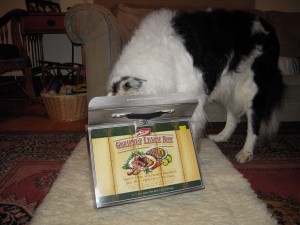 You’ve probably heard about the research from Austria that suggests that dogs have a concept of fairness and/or jealousy. By the time you read this I’ll have probably talked about it on The Diane Rehm Show, but it deserves some attention (and some critical thinking on our parts.) Basically, the researchers taught dogs to ‘give paw’ for a treat, then sat them down side by side and rewarded one dog for a correct performance but not the other. The unrewarded dog’s responsiveness degraded quickly, and he or she stopped performing as taught. This would be meaningless; you’d expect a dog to stop responding if the reinforcement dropped out completely, however, the performance dropped FASTER if the non-reinforced dog saw the OTHER dog getting reinforced for the same behavior. That’s the kicker (though is left out of several of the news posts….).

So here’s a chance to engage our critical thinking. Some news posts call this evidence of jealousy. Others say it proves that dogs have a sense of fairness. Question one: are those the same? If not, then which does the study support?

I’ll weigh in with my own opinions later this week. (And my apologies for being slow to comment on the comments. I read them all with tremendous interest, but fighting the Virus Wars last week got me way behind….)