Welcome to an ongoing inquiry about the behavior of people and dogs.
Blog Home >> Border Collies >> Final Exams — Puppy Style

My UW students just took their last exam, and along with grading all 150 of them, I’m off with Jim to pick up the pup tomorrow. He’ll be nine weeks, a male Border collie of excellent herding lines who are also carefully bred for health and temperament. I’ve known his dad for years, always considered him a “bomb proof” dog–so much so that he was the first dog that Will was allowed to be in physical contact with after a year of classical and operant conditioning to turn his dog-dog aggression around.) Some background:

Two days after Lassie died I was online looking at rescue sites and shelters. I’ve never done that before, always needing a long time to let the other dog go.  I’m not sure why I did it after Lassie died. Her death was profoundly difficult for me; the loss of her was hard enough, but a decision I made at the end turned out to be the wrong one, and she died on her own, and not well. I should’ve put her down the night before, but I didn’t, so she suffered at the end and I had promised her I wouldn’t let that happen. I felt physically ill about it for days and no doubt my internet search was in part about finding something to ease the pain. Three days after she died I found a little, sorrel and white fluff-ball dog, the kind I call an “oxytocin pump” on my local shelter’s website. We went the next day to donate unused medications, and I told Jim if we were lucky the dog would already be adopted. I knew it probably would be, dogs like that leave shelters within hours if not days, and it was indeed already reserved for a new home. “Whew” I said to Jim, dodged a bullet there–probably not too wise to get a dog 3 days after Lassie died. And I would’ve taken it if it had been there, no question about it.

Since then, I’ve been looking on-line for months, waiting for just the right dog to appear, the plan being to end up with a total of 2 Border collies and a small, fluff ball dog as the canine residents of Redstart Farm. I wasn’t planning on a puppy, but heard about a litter from two solid dogs with great temperaments and super herding skills, met the parents, had long talks with owners of 3 year old dogs of the same breeding.. and here we are, about to bring a new little life into our home.

I had 5 pups to choose from, 2 females and 3 males. Overall, a female would have a lower probability of getting into competitive interactions with Will, but his best friends have been smaller, submissive males, so I decided I’d take either sex if I found a pup I really liked. I thought you’d be interested in how I chose. As many readers know, there are many “temperament tests’ out there (tho’ really they are “behavioral assessments” or “personality tests,”) and I used a combination of standards tests and measures that I’ve used for decades. My own opinion is that although no tests of a young pup are as predictive as we’d all like them to be, they are better than throwing your hands up in the air and choosing based on coat color or a pretty face. It helps that I’ve done hundreds of these in a similar way, and my belief is that doing it so many times to so many different kinds of dogs surely must provide some wisdom… at least, one can always hope.

Here’s what I did: The pups were in an EX pen in a grassy area.

ONE: I took one pup out at a time, and put them down about 20 feet away from the pen, and then clapped and moved away from the pen. I hadn’t planned this to be a test of “bold/shy” but it was windy and noisy and we had to pass barking dogs in a kennels, and it turned out to be a great way to compare the pup’s responses.  My pup (we called him Tri Male) was only one of 2 who stayed with me. He actually did baby outruns around my feet and tried to stop my forward motion, all open mouth and happy. Three pups ran back to the pen, ears flat, one other pup stayed with me, seemingly oblivious to everything but staying with me. (Good sign of boldness and interest in being with me? Maybe! (Maybe not!) Good sign of herding potential from Tri Male? (NO… I know of absolutely no way to test herding interest or ability in a young pup! The behavior often doesn’t show up until 7-9 months, so I would never make any guesses about herding ability at 8 weeks.)

TWO: We moved to a quiet area, I let the pups sniff a bit, did some petting, and then tossed a crumpled up piece of paper about 2 feet away. Tri Male followed it, picked it up and brought it back 2 times in a row. One other pup did the same, 2 tracked it and touched it with their noses but didn’t retrieve, one paid no attention at all. (Retrieving a good sign of willingness to work as a team? Maybe, maybe not. Good sign of interest in objects and potential for lots of object play… maybe…)

THREE:  I gently rolled the pup over onto its back, and held it down with my hand on its chest. I scored intensity of struggles as 1 to 5, 5 being most vigorous, 1 being none. Tri Male struggled “3” for 3 seconds, then stopped, went quiet, relaxed and looked at my face. He was only one of two who stopped struggling, but he had no signs of fear or appeasement on his face when he did so, he just looked relaxed. (Good sign of frustration tolerance? Maybe… )

FOUR:  Teach sit with food lure. All pups behaved the same. They loved the food and were all sitting easily within seconds. No differences here, great responses.

FIVE: Gently restrain and open mouth 3 x in a row. Most pups squiggled so much that I couldn’t divide my attempts into “first, second and third” (and had to struggle myself not to just lie down and laugh). Tri Male was the only pup who I could record 3 different actual “mouth opens” and we recorded him as “No struggle lst attempt, 2 out of 5 for the 2nd attempt, 4/5 3rd.”

SIX: Let explore on their own for 2 minutes, then called come (“pup pup pup” + hand claps) without moving:
4 pups ignored me completely (including Tri Male), one pup (a sweet, slightly shy female) responded and came over. All pups had moved under a large tree (in the shade, we were in the sun) and seemed obsessed with a scent in the leaves.) Tri M totally ignored me until I came closer.. no way to know if he was ‘not forgiving’ me for the mouth handling, or wanted to stay in shade and distracted by the scents.

SEVEN: Got pup’s attention by going closer, then called to come by clapping, calling and running away. Ran back and forth 4 times, about 6-8 feet each time. All pups followed perfectly. (Sign of all being Border collies? … I think I can say a definitive yes here.)

EIGHT: Startle response: threw bait bag down beside them, about 2 feet away from pup’s head. Noise loud, but was on grass so not as loud as if on hard surface. I did not do this with the slightly softer female, seemed too much for her, but did with the other 4 pups. Tri Male startled briefly without flattening, then approached and sniffed. (Good response and recovery to potentially frightening event? Maybe….)

NINE: All back in EX pen, adult dog let out who ran to pen. All pups approached, one female with tail up and over, almost touching her back, all others with tail horizontal, including Tri Male. Adult dog began to run fast, vigorous circles around pen. Four pups followed, running in circles inside the pen, except Tri Male, who moved to the center of the pen, with big eyes and flat ears. He eventually lay down in a crate and went to sleep while the others were still up and active.  (Sign of being easily stressed by .. what? Other dogs? Rapid movement? Hummmm…..)

And so, after a half hour of talking, Jim and I decided on Tri Male. Overall, it looked like a lovely litter.  One male and one female were super sweet and affiliative, and one female is going to be a pistol, the kind of dog who pushes your buttons but you still love like life itself. They all seemed like good, good dogs, but Tri Male had the best overall score of the bunch, doing great on 7 out of 9 tests. The only possible red flag was his last response to the circling dog, which I won’t pretend didn’t worry me. However, based on the fact that 1) his other responses were excellent, 2) he comes from solid stock (although every dog is different, so I didn’t want to make too much of that), and 3) okay, I love his face (another post will come someday about how much looks should matter.. if at all), I decided to take him. That last response could indicate huge trouble (easily stressed by a commotion and inability to recover quickly?) or nothing at all. How much do we make of one incident, either positive or negative? There’s only one way to find out, and you know what that is. . .  (FYI, Tri Male ran in circles with the other puppies when the same scenario occurred a few days ago. Yeah!)

Meanwhile, back on the farm: Crates are ready, puppy food is on the counter . . . and it turns out that Jim will need surgery, ASAP, on his arm. Ah life, never a dull moment, hey? No more photos of the pup yet, but we’ll take tons over the weekend. But here’s a photo I took a few days ago on the road to the farm, a perfect image of what it looks like here now. Yup, it really is that pretty out here. 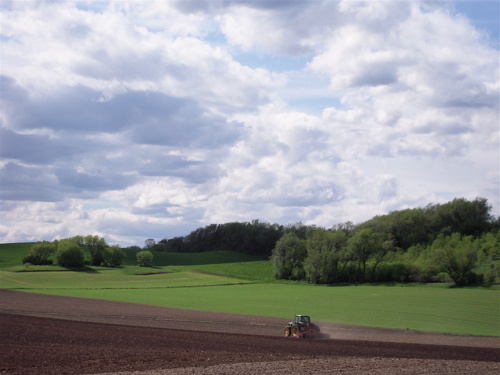