Welcome to an ongoing inquiry about the behavior of people and dogs.
Blog Home >> Animals and the People Who Love Them >> Giving Support After Giving Thanks

Last week I savored your responses to my Giving Thanks post. No matter how big or how small, it’s good for us, and those around us, to let gratitude soothe our souls. Today, I’m focusing on giving thanks through the “Giving” part. It’s Giving Tuesday, and although, like me, you mighty be feeling a tad overwhelmed with all the requests, I still love the idea of a day that counters the Spend Money on Things forces that flow like lava around us.

There are so many good causes out there that need money and/or resources; here’s what I’m contributing to this holiday season:

LOCAL: My local shelter is the Dane County Humane Society, and I plan to donate a big box of my books to it. I’ll be sure to bring lots of Love Has No Age Limit books, which we’ve put on sale for Giving Tuesday, November 28th. (If you’re reading this and too late for the sale, it’s still massively discounted for bulk sales!) When you donate the books they can give it away for free to adopters, a win/win for everyone. 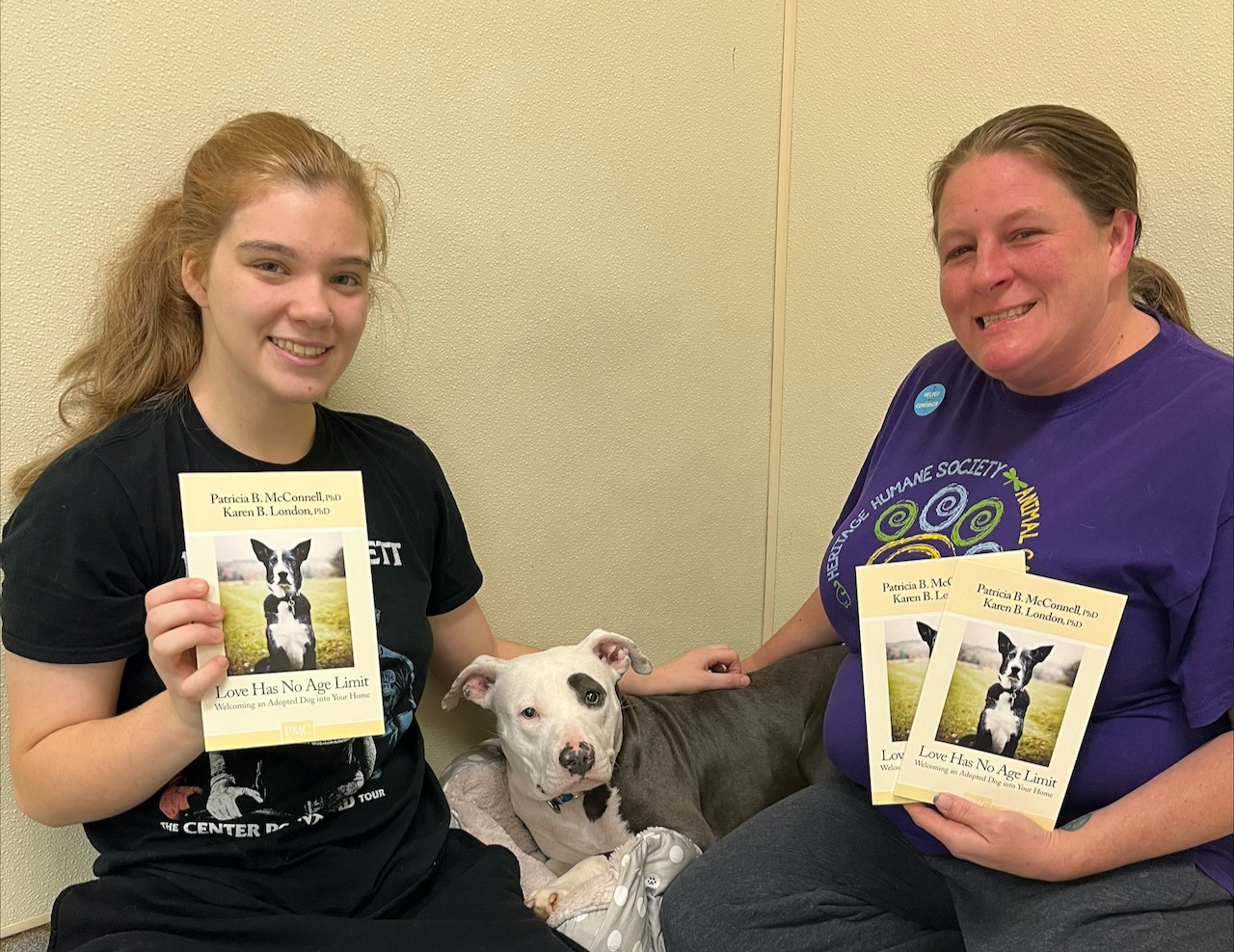 Thanks to the staff at the Heritage Humane Society in Williamsburg Virginia for the photo!

The book is about bringing a new dog into your home who is older than puppy, from an early adolescent to an elderly senior. Over the years, many wonderful people have purchased the books in bulk and donated it to their local shelters and rescue groups; shelters tell us it decreases returns and behavior hot-line calls. Everyone involved in creating the book, kudos here especially to co-author Karen London, agreed to keep the price as low as possible because it’s a labor of love to people adopting older (not old necessarily) dogs, bulk sales are insanely discounted, and now we’ve discounted it even further. It does my heart good knowing that it has helped so many people. 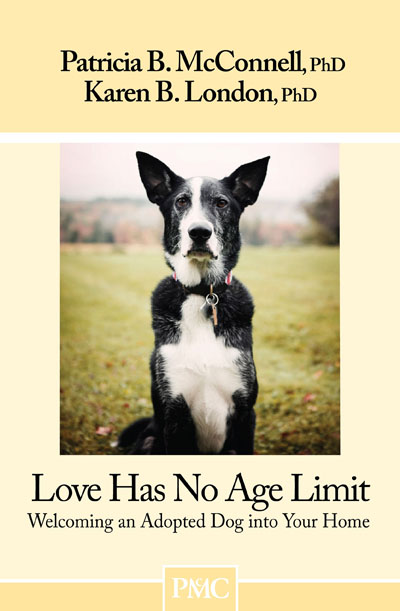 NATIONAL: There are sooo many fantastic people at the ASPCA, and they do so much good work, that I’m sending in another donation to them today. Wait, I interrupted this to Just Do It. I’m especially impressed with the work they do at the Behavioral Rehabilitation Center in Weaverville, North Carolina. Some very smart and dedicated people have been developing a protocol for rehabbing severely damaged dogs (psychologically, not physically) since 2013, and have just released a paper on their work. I’ll be writing a post about it early next year, interviewing Dr. Pamela Reid about what works and what doesn’t.  The “A” is on the ground for disaster relief at a moment’s notice, and they do amazing work shutting down dog fighting rings; one of their staff spent two years–his life in danger, seriously–to shut down a huge ring in the South. That’s not a position I’d ever volunteer for, and I’m happy to do what I can to support such important work.

INTERNATIONAL: The International Fund for Animal Welfare, IFAW, is right now working in Ukraine to help the millions of displaced people with their pets. I can’t even imagine what it would be like to lose your home, your family, or any sense of security, while worrying about your dogs or your cats. From all I can tell, without, obviously, being there, IFAW has been doing good work all around the world for years. Much of their work is also in wildlife protection and conservation, which makes them especially attractive to me. From sharks to whales to elephants, all these species are under tremendous pressure. It does seem that most of their wildlife work is on what’s called “charismatic animals’–I doubt you’ll find a lot of projects at IFAW on some obscure vole or mouse; but no group can be everything to everyone, and they seem also to be working hard in Ukraine, so I’m sending them money (again) today. Whoops, correction, just sent money. It’s taken me forever to learn, but better to do anything I can now than say I’ll do it later, “when I have time.” Ha! When does that happen?

FOR THE ENVIRONMENT Which, of course, also means for us, our children, along with all the animals and plants on earth. 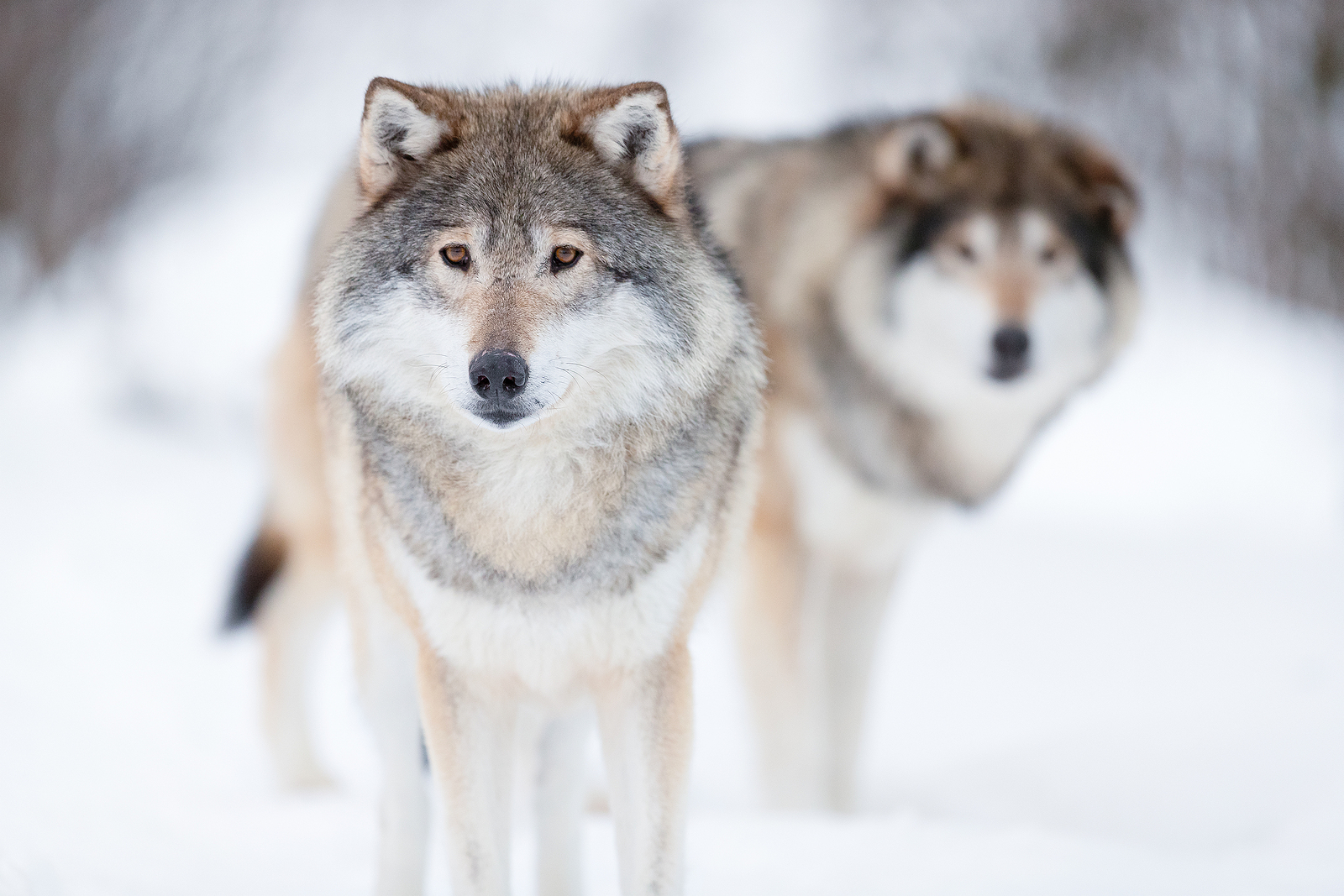 WISCONSIN GREEN FIRE: Do you know the story from Aldo Leopold’s famous book, A Sand County Almanac? Leopold is called the Father of Ecology, and here is what he wrote, about a time he had been hired to kill as many wolves as he could in the west, because they were considered pests: “We reached the old wolf in time to watch a fierce green fire dying in her eyes. I realized then and have known ever since that there was something new to me in those eyes, something known only to her and to the mountain. I was young then and full of trigger-itch; I thought that because fewer wolves meant more deer, that no wolves would mean hunters’ paradise. But after seeing the green fire die, I sensed that neither the wolf nor the mountain agreed with such a view.”

That’s the basis of the name of a relatively new group–Wisconsin Green Fire–which houses an impressive group of wildlife ecologists, former DNR experts, and environmental scientists from many fields who are working on important conservation issues around Wisconsin—including a reasonable wolf management plan (which had an impressive impact on the DNR’s new policy, whew), PFAs mitigation, widening the net of citizens involved in conservation, and creating climate change mitigation plans for local communities. It began when our former Governor gutted the DNR and did all he could to set responsible environmental management back into the dark ages. Things are better now under a new Governor, but the state is still in desperate need of expertise and committment. Full disclosure: Jim and I helped stuff envelopes five years ago to help get this group started, and I’ve followed them ever since. They have made me an Ambassador, in good company with former Senator Russ Feingold, Patty Loew, and Tia Nelson.

As part of that honor, I am hosting Fred Clark, the Executive Director of  Green Fire, and several of the Board members next Monday at 10 AM, December 5th, 2022, at Basecamp Cafe in Mazomanie, WI. They’ll have much to tell us about fighting for wolves in Wisconsin, keeping our waters clean, and reaching out to all of the state’s citizens to protect our environment. If you can come, it would help if you’d let us know by sending a quick email to info@patriciamcconnell.com. If you can’t, you already know that I think they are an important force in fighting for the health of the land, and all the animals within it, so a donation to them, no matter the size, would go a long way.

ONE LAST THING: I know it feels like we are all living in a black hole that sucks up money like a cosmic vacuum cleaner. And money might be crazy tight for you right now. Don’t stress; life is hard enough. Give what you can this week/month, whether large or small, or consider giving something that doesn’t involve money. Cook dinner for a friend who’s exhausted or grieving? Offer to baby sit someone’s dog or cat so that they can get away for one night? Or, if you’re just simply spent yourself, give yourself a break, take a long bath or shower and breathe deeply. You’re alive. You’re here. You’re enough.

That’s my list for today. I’d love to hear your thoughts and ideas about your plans for this week, please add to my list if you’d like.

MEANWHILE, back on the farm:  We had a lovely, relaxing holiday weekend. Jim’s son Zach and partner Sarah were over for the full-monty turkey dinner. Is it possible to love turkey sandwiches with dressing and cranberry sauce more than I do? I think not. I didn’t get any photos, but here’s a shot of lunch today, in honor dear friend Harriet’s 80th birthday. Peanut soup from her recipe box, grilled cheese sandwiches and a gorgeous garden salad. Yum yum. 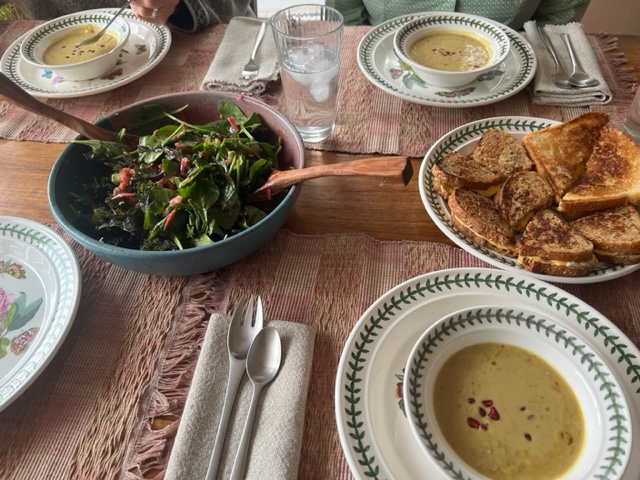 Skip got himself tangled up in a friend’s knitting after lunch; it’s hard to untangle a dog when you’re laughing . . . Poor Skippy Dip! 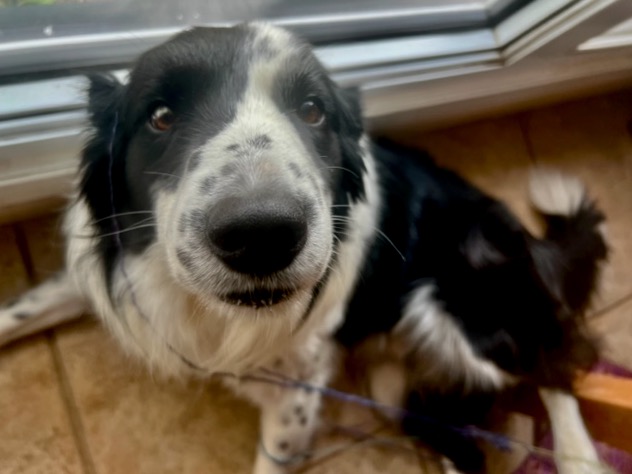 The snow is long gone, we’ve had several days in the 40’s and low 50’s, so it’s been balmy but sort of boring color-wise.

I took a break from writing to work Maggie and Skip. Here are two of my favorite guys: Skip and ATV George (it’s a Foreman, blame Jim for the name!) 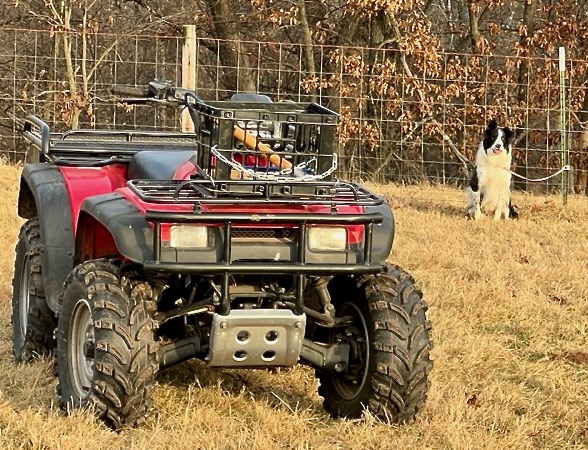 The sheep are not so fond of either, although I expect they’d prefer George to Skip: 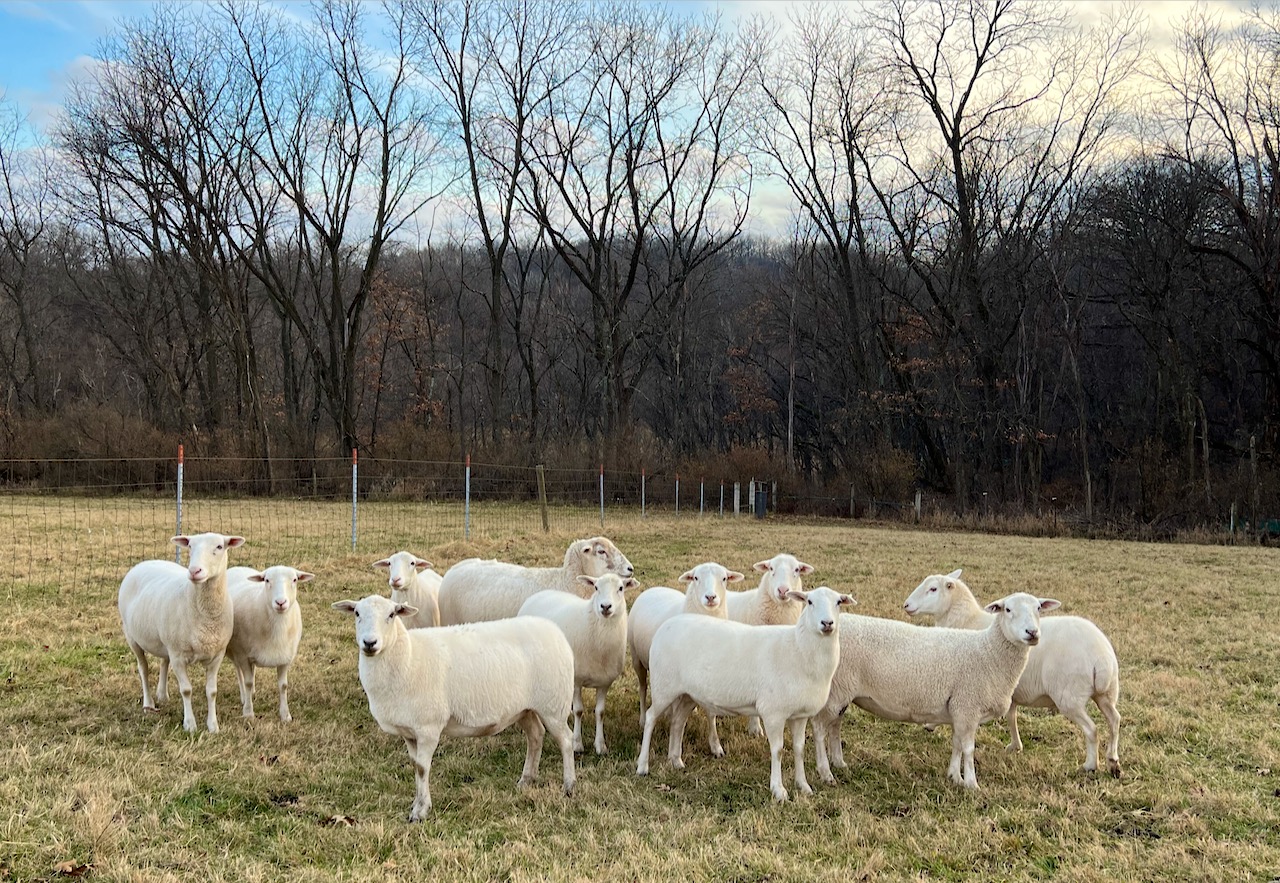 I’ll be giving them thanks by putting out some luscious alfalfa hay for them as soon as we’re done. Join me in giving thanks and resources to organizations that do so many good things!