Welcome to an ongoing inquiry about the behavior of people and dogs.
Blog Home >> Animals and the People Who Love Them >> Hawaii, Happiness, and, Of Course, Dogs.

We were going to go. Then we weren’t. We’d had plans for six months to go to Hawaii with friends. We all cancelled a few weeks ago, after Omicron raised its ugly head. Every morning for a week after we cancelled I woke up heartsick. I’ve been lucky in my travels–lucky beyond anything I could have dreamed–traveling for work to New Zealand, Australia, Scotland, England, Germany, Mexico, Alaska, not to mention five times to Africa. But, I’ve never been to Hawaii, I’ve always wanted to go, and it felt like I was losing my chance.

I decided to let the universe make the call. If the place we had rented, and then canceled, was still open, we’d take it and re-book the flights. If it wasn’t, then okay, we weren’t supposed to go. It was. We went. It was wonderful.

We stayed in the rainforest part of Maui, off the famous Hana Highway at the Maui Ecoretreat. This view is literally from our backyard. Granted, to get to it you had to go down a trail so steep you had to use ropes to keep from falling, but still. Our backyard. 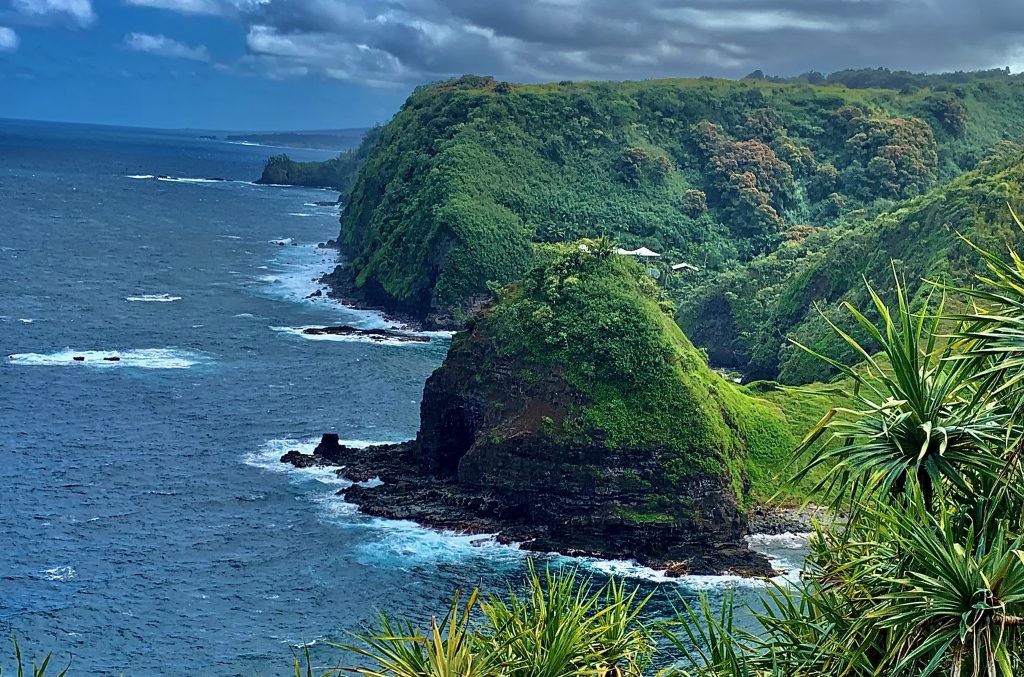 Here’s my intrepid travel partner, looking all Indiana Jones-y against this massive tropical tree in the ‘Iao Valley State Monument. Tropical vegetation is marvelous–more variable than deciduous plants, and much of the time straight out of a Dr. Suess book. 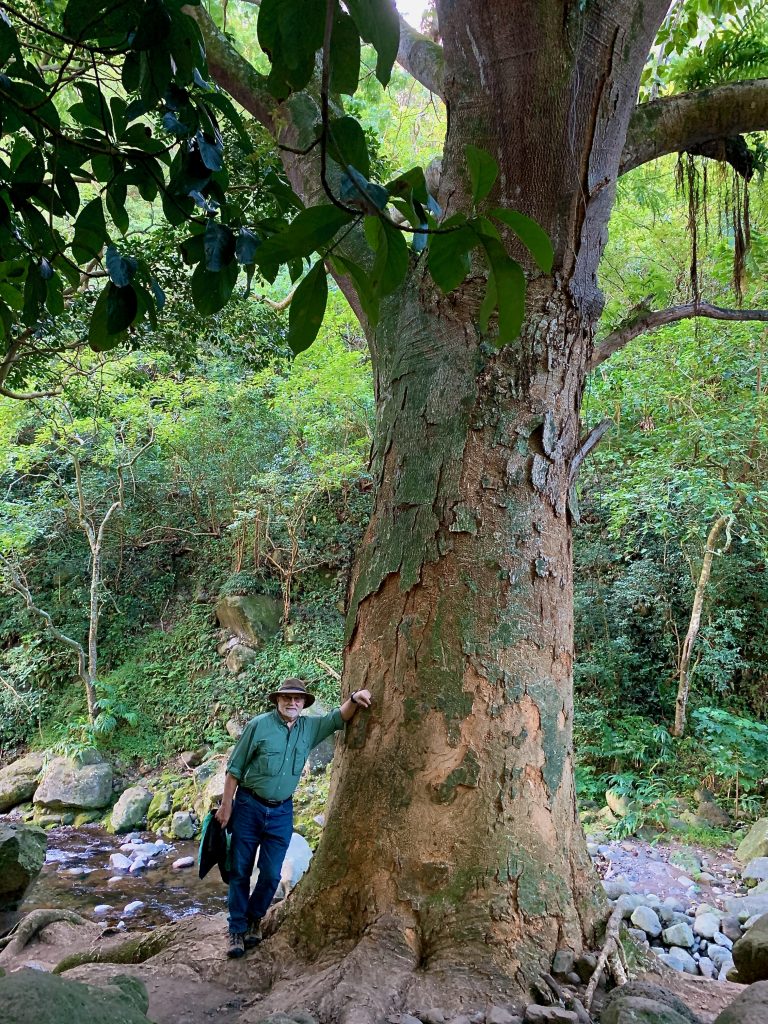 This next photo is from the Haleakala Volcano, pretty much the top of the world. That’s the big island in the distance. We were at 10,000 feet, which my asthmatic lungs would like you to know is TOO HIGH, but it felt like being on the top of the world and was worth the headache. Watching the clouds move across the land and ocean was riveting. 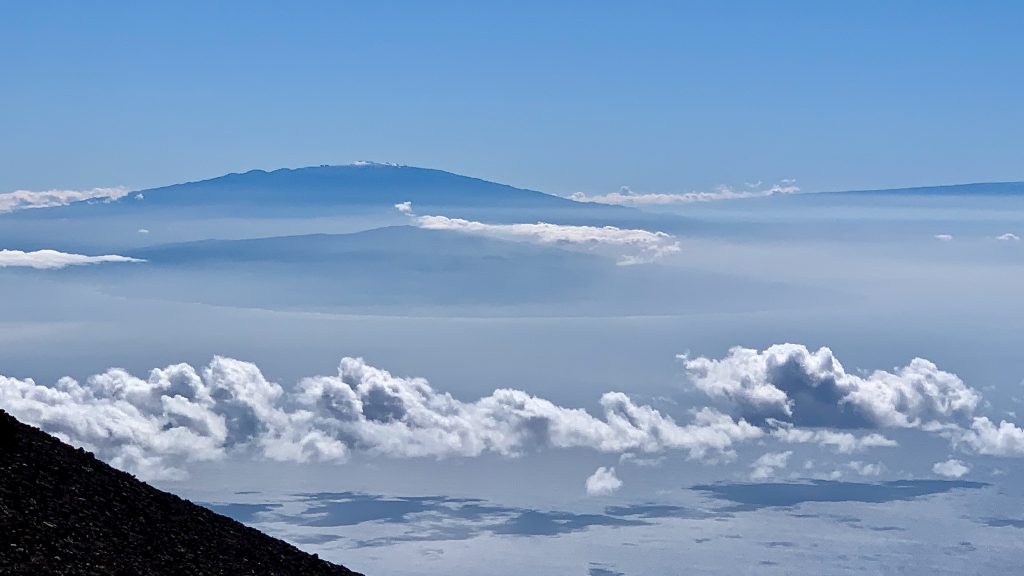 We had lunch at Kula Lodge on the way down from the mountain; the food was as good as the view. 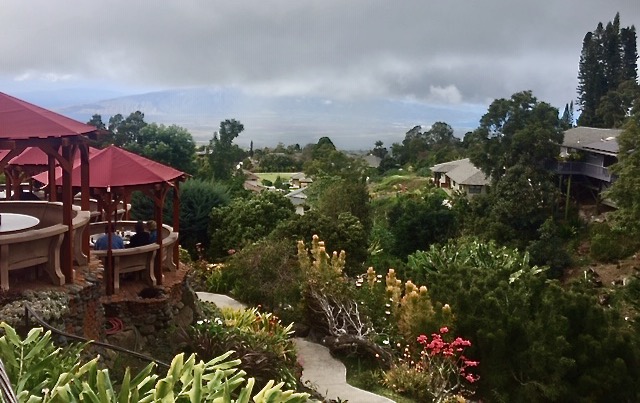 You probably know that many of Hawaii’s native birds are now extinct due to the importation of mongeese, rats, cats and an imported bird named the White-eye that carries Avian malaria. I knew those facts, but was still saddened at how few birds we saw in Maui. Except for the ubiquitous Mynah bird, which is virtually everywhere.

But we did have a good time at the Kanaha Pond Sanctuary out side of Kahului. Most of it was closed during the pandemic (because . . . ? It’s outside and the safest place to be. . . ?), but we were directed by some volunteers to a short penninsula that led to the water, where we were surrounded by Hawaiian Stilts. What elegant birds. 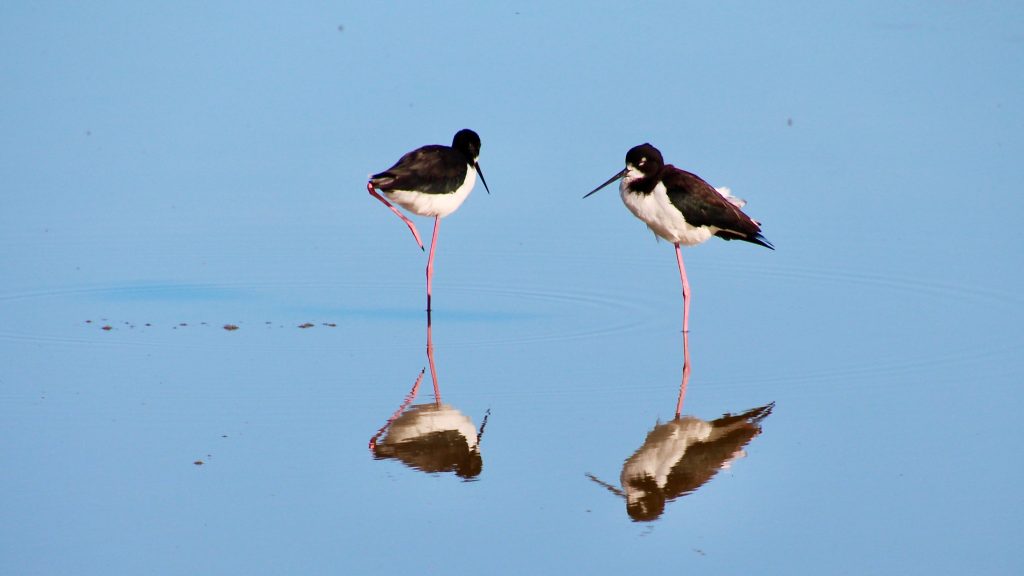 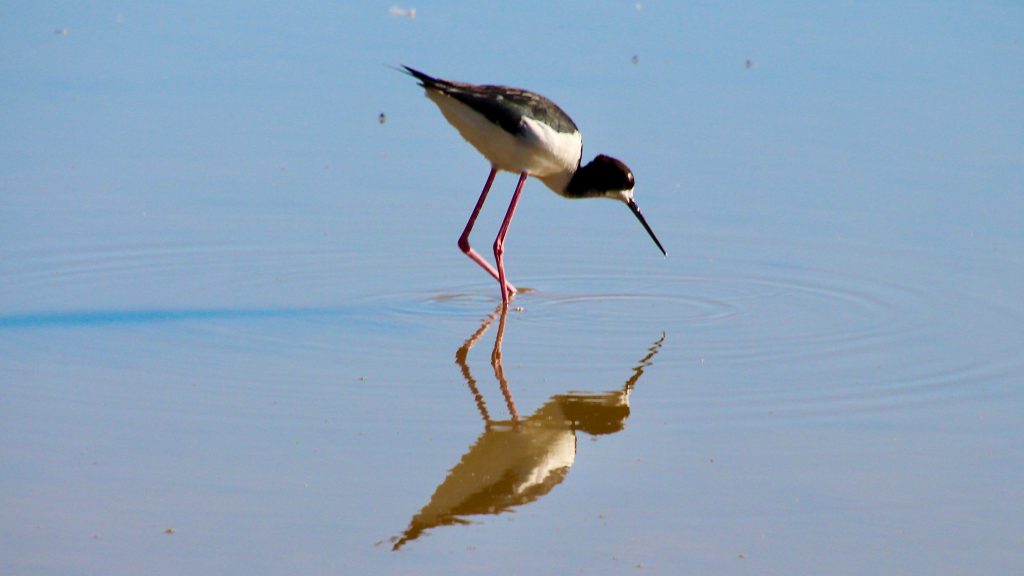 If you’re still with me, you might be wondering why I put dogs in the title. Bear with me, I’m getting there.

As I said earlier, we almost didn’t go. We canceled primarily because of Omicron, and every day for a week I thought we had made the wrong decision. But there was something else bothering me, deeply, and it had to do with being happy. What right did I have to go do something so luxurious, and be so happy, when so much of the world is suffering? Jim and I have been so lucky in so many ways during this endless pandemic; I am grateful for what we have every day. But I can’t say that I’ve felt really, truly happy–that vacation kind of happy–since it began. Too much pain in the world, too much to worry about, too much to fight for or against. Too much, just too much. And that’s from someone who, again, is living a charmed life in so many ways. I think of others who aren’t every single day.

And that’s where the dogs come in. Because along with Jim and my dearest friends, it’s the dog that have kept me going. Watching Maggie and Skip play twice a day lifts my spirits no matter what else is happening. Snuggling with Princess Maggie on the couch every night comforts me beyond my ability to express it in words. Watching Skip use his skill and commitment to move a determined ewe three times his size gives me goosebumps. I am lucky in oh so many ways, but living with two such special dogs is high on the list. I’ve written multiple times about why we love dogs so much, most extensively in For the Love of a Dog.

It was reading the wisdom of others, and my on again, off again meditation practice that reminded me of the value of joy. For example, here’s a good article from The Atlantic about how being guilty over happiness serves no one. So, I’ll continue to do what I’ve been doing to try to make the world a better place. And, I’ll let myself be really, truly “vacation-happy” in rare, idyllic  moments like the one below. 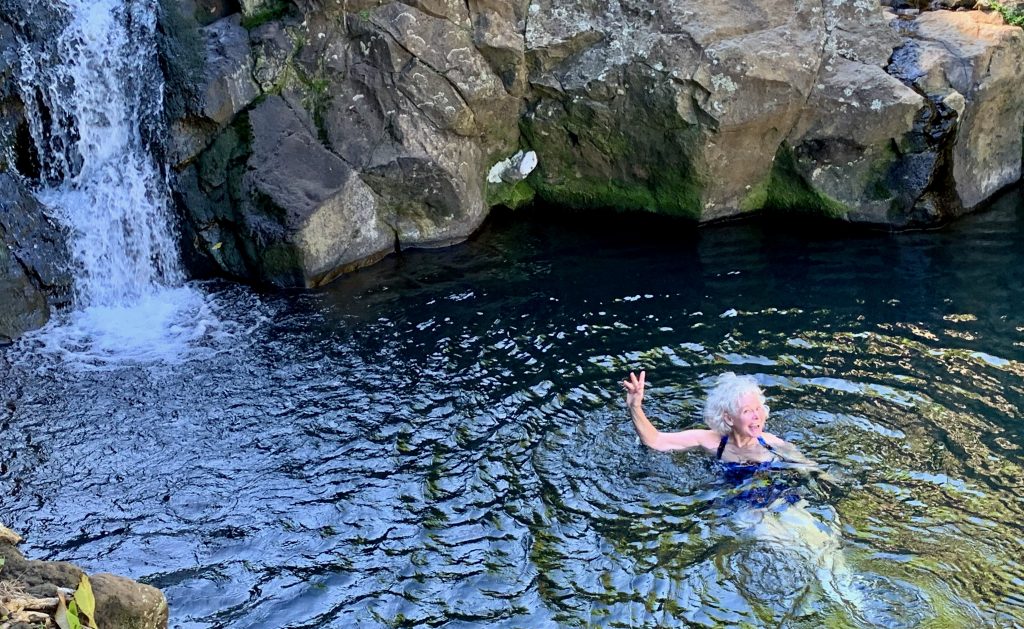 MEANWHILE, back on the farm:  I decided to take a photo of comparative footwear, titled: “One of these things is not like the others.” I thought of it because it was such a dream to not have to put on big, heavy boots to go outside in Maui. I was messing around with where to make the shot, when the dogs made their statement. “WE ARE NOT IN ANY OF THESE PHOTOGRAPHS. WHAT IS WRONG WITH YOU?” I’m pretty sure that it was Maggie doing the yelling. 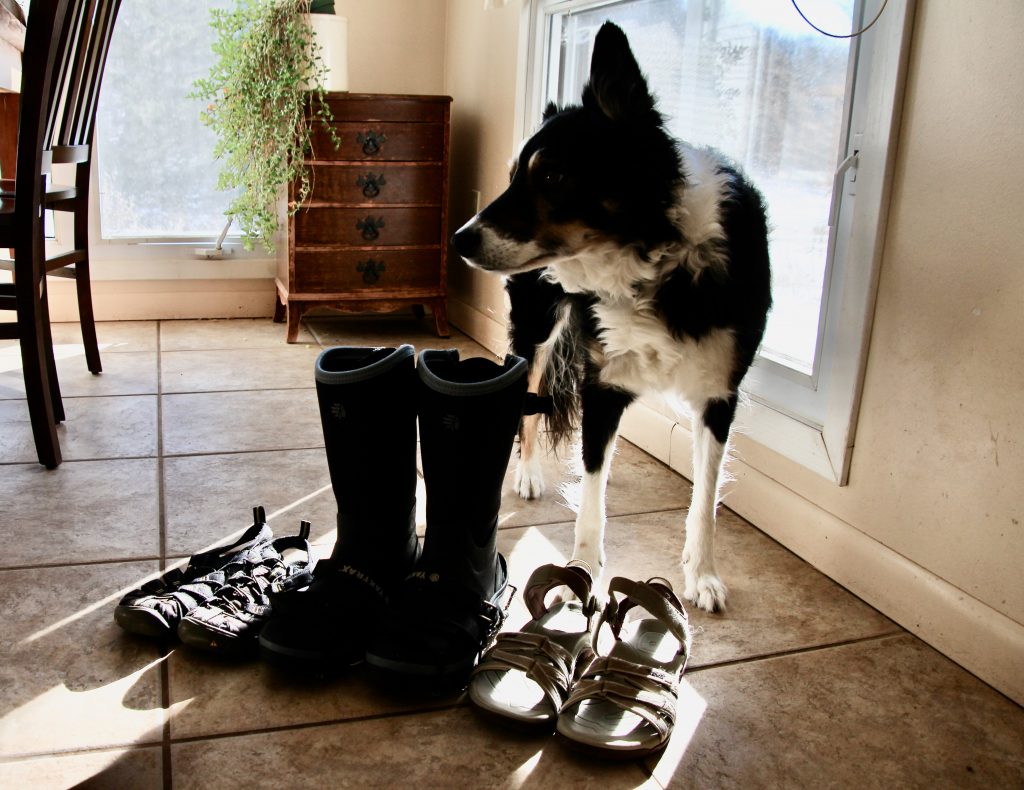 Skip is not a yeller, but he had his own statement to make. He sat down beside me and made it impossible to get any more decent shots. 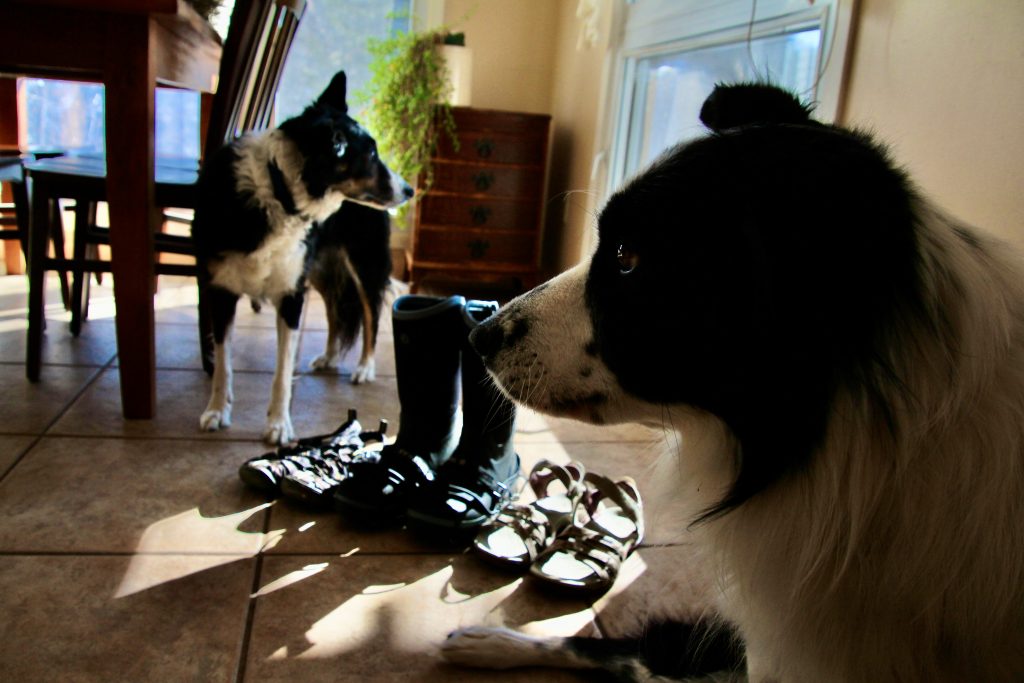 Of course, I could’ve just sent him away, but it’s hard to do when you’re laughing.

It is eight degrees Fahrenheit right now, so these flowers from White Flower Farm are making me happy. That’s an Amaryllis in the foreground; I save them every year (outside in summer, in cool basement in fall) to save money–they’re gorgeous but expensive. The bulb garden, responsible for the color in the background, is something I could do myself too, but this year I sprang for a new one that was in full bloom when we arrived home. Dogs and flowers, yup. That’s happy. 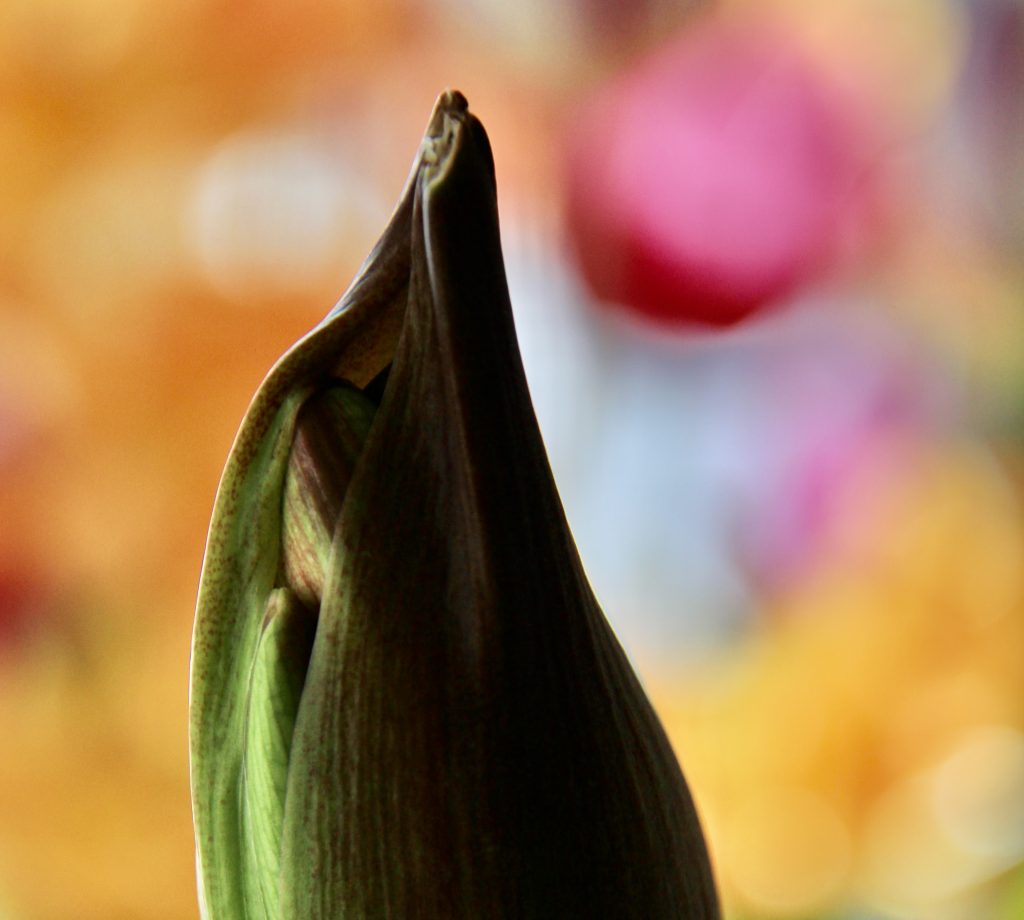 Happy is good, tell us where you are finding it this week, no matter how or where.