Welcome to an ongoing inquiry about the behavior of people and dogs.
Blog Home >> Animals and the People Who Love Them >> Isn’t It Great That Dogs Don’t Get Sarcasm?

Willie woke me up at 3 am this morning, as he did yesterday morning. I have no idea why-speculation is that he needed to potty, or he is waking up earlier and earlier to get the food in his morning Kong. I told him to “settle” and managed a restless doze until 5 am, when he pretty much threw himself at the bed, woke Lassie up from a log-like slumber, and careened me out of bed, still asleep and not at all pleased. I held my tongue, let the dogs out to potty, and then gave them their stuffed Kongs and went back upstairs.

When I came back downstairs, about an hour later, one of the dogs had defecated all over the house, and I mean all over. In the dining room, on the rug in the living room, on the floor in the living room, in the study, in the kitchen . . . Isn’t it amazing how much area one dog can cover? Of course, I ended up stepping in some while I was cleaning up another spot, and managed to distribute the poop even more liberally around the house than my dog had. I truly don’t know if it was Willie or Lassie (suspect Lassie, but just guessing, even though it was Will who woke me up so early), but I felt pretty much like what I was cleaning up, and said:

” What a WONDERFUL way to start my day! I just LOVE cleaning up s— so early in the morning! Thank you SO much, what would I do without you?” Truth be told, this was after exclaiming, and not in a happy voice, “Oh NO!” (or words to that effect) when I discovered that my slipper (still attached to my foot) was tracking the poop around faster than I was cleaning it up. Even though it wasn’t directed toward him, Willie responded to my louder-than-usual and clearly displeased voice by slinking out of the room as if I’d beaten him. One of the things I love about Will is that he IS so responsive. Even when he was young he listened better on sheep than any dog I’ve ever had. But the flip side is that he listens, and listens carefully, all the time. If raise my voice because I tripped over something and dropped a glass, Willie looks horrified. Like the young child of a divorcing couple, Willie seems to take everything personally, and just hates it when anyone raises their voice.

As soon as I saw his rounded eyes and lowered head this morning, I felt even worse–the last thing I wanted to do was to upset Willie. Ah, but one of the best benefits of human language saved me: the ability to say one thing and mean another. That’s when I switched to “Why thank you SO much. . .”, said in a liltingly happy voice. Any human within hearing distance would have known perfectly well that I meant the exact opposite of what I was saying, but I managed to express my frustration while sounding perfectly pleased to the dogs. (At least to Will, Lassie’s hearing is now bad enough that I suspect none of this had any effect on her.)

I’ve used this technique before, when I was truly irritated at a dog. I even advise it–it’s very helpful, when your dog has done something that just drove you crazy, to say something like “I hate every hair on your furry little body,” as long as you say it with the sweetest of expressions. (Highly recommended when your puppy finally comes when called, after a long delay!) I know there are people who say that they never EVER get even the slightest bit irritated at their dogs, and never, ever raise their voices their entire lives, and more power to them-I just can’t imagine that myself. (Maybe they could date Dr. Spock from Star Trek?)

So here’s my question to you: what do you do when and if your dog does something that challenges your frustration tolerance? I’m assuming here that we all agree that simply expressing anger isn’t constructive (or do you disagree?) Are there ever any circumstances where it IS appropriate to let a dog know that you are truly steamed? I look forward to your thoughts . . .

Meanwhile, back at the farm, I am sparing you a photo of the floor as it was when I came downstairs. (You’re welcome.) Here’s a nicer image: what it looked like outside about the time I got everything cleaned up: 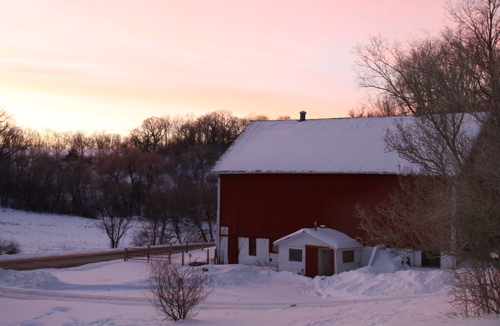 I thought it was fun to compare this to a photo from outside of Naples, Florida, in Corkscrew Swamp. A bit of a difference! 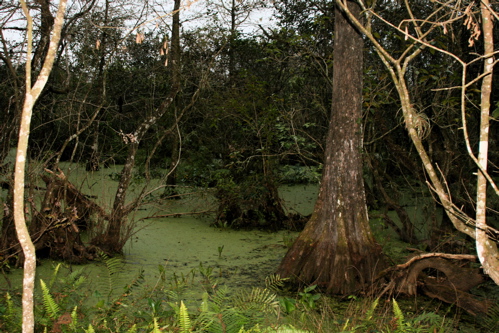 « From Sunny (not) Florida
Helping Owners with the Inevitable »