Welcome to an ongoing inquiry about the behavior of people and dogs.
Blog Home >> Dog Behavior >> It’s Who You Know: Breed Stereotypes & Handler Appearance

We all know that different breeds of dogs elicit different perceptions about their personalities from the general public: Border Collies are all “smart,” and Golden Retrievers are all “friendly.” These perceptions are sometimes based on facts that are generally true. Border Collies are indeed often clever, and many Golden Retrievers are extremely friendly. However, we all also know that, although, breed stereotypes often have some basis of truth in them, they are just as often incorrect. For a number of years, I saw more Golden Retrievers for biting than any other breed, even though other breeds were as well represented in the local pet population.

We all know that different breeds of dogs elicit different perceptions about their personalities from the general public: Border Collies are all “smart,” and Golden Retrievers are all “friendly.” These perceptions are sometimes based on facts that are generally true. Border Collies are indeed often clever, and many Golden Retrievers are extremely friendly. However, we all also know that although breed stereotypes often have some basis of truth in them, they are often incorrect. For a number of years, I saw more Golden Retrievers for biting than any other breed, even though other breeds were as well represented in the local pet population. I’ve met a couple of Border Collies who appeared to be as intelligent as earthworms.

These stereotypes don’t just apply to positive traits like intelligence and friendliness: the general public attributes negative traits to some breeds, perceiving Miniature poodles, for example, to be foolish and mindless little dogs. At least that is the impression I get when I hear people talk about small poodles, when in my experience, they are smart as whips. Perhaps no breed elicits more stereotypical responses from the public than one of the bully breeds. Recent research by Lisa Gunter, CBCC-KA, CPDT-KA, presented at IFAAB in San Diego, (and soon to be presented at ISAZ) confirmed that people rated photos of a Labradors and a Border Collie as significantly “friendlier, approachable and adoptable” than a pit-bull type dog. All the dogs in the photos, by the way, had relaxed, “friendly” expressions on their face. The subjects (228 people) also rated the pit-bull type dog as higher on “aggressiveness” than the other two breeds. None of this is particularly surprising, given the public’s perception of bully breeds in general. Another study by Protopopova et al also found a negative perception of pit-type breeds (2012 on line): they found that teaching dogs to gaze into potential adopter’s eyes had no effect on rates of adoption, while breed, size, surrender versus stray, and location in the kennel did. “Fighting and Sporting breed” dogs stayed at the shelter longest, while “ratters and lap breeds” stayed the least  amount of time.  (Side note: Research related to adoptability of breeds and public perceptions about them brings up some interesting and  important questions about breed-related predispositions of a number of breeds–not just pit-type dogs. Are any breed stereotypes valid? Both positive and negative? What are the comfort levels in the field about discussing them? This discussion deserves its own post, so I’ll write about that in another article.)

Here is what is most important about Lisa Gunter’s work: After the initial results that rated the dogs of three breeds, subjects were asked to rate the same photo of the pit-bull type dog while sitting beside a variety of people. The subjects were asked to make the same ratings about the dog while sitting beside a young child, an elderly woman, a “rough” male, (the pits) and an “active male,” and a woman in a wheel chair (the BC and Lab). Sure enough, pairing a young child or an elderly woman beside the pit-type dogs changed people’s rating of them. Sitting beside a young child increased the perceptions of the dog’s intelligence, friendliness and adoptability, while decreasing the predictions of “training difficulties and aggressiveness”. Significant changes were found in increased friendliness and decreased aggressiveness. The “rough male” photograph actually decreased the subject’s perception of the dog as friendly, but increased their perception of the dog as intelligent, and the elderly woman had the strongest effect on adoptability. (The “rough male” finding is perhaps the least relevant to applying these results to increasing adoptability of dogs on websites, but I find it interesting. Especially since we joked at IFAAB that the male didn’t look at that “rough” to us. I thought he was sorta hot… just saying.)

Here is the photo of the pit-type dog used in the study: 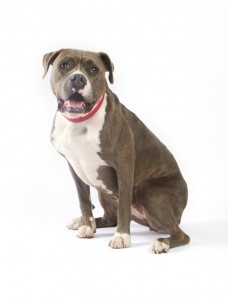 Here is the same dog beside a child and an “elderly” woman (who looks to be in great shape to me!): 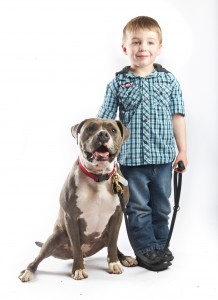 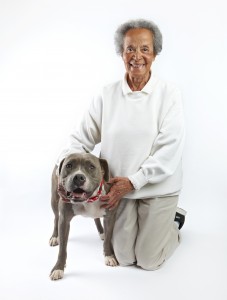 Ideally, some of the variables would have been controlled: same photo of dog, standing versus sitting, etc, but the work does a good job of showing definitively that a particular dog can look more attractive to viewers depending on the photo, and that placement beside a particular type of person appears to have a strong effect.

The practical implications for this are huge, and not just related to any one breed. What this research has shown (along with a similar study by Walsh et al on Labradors, German Shepherd Dogs and Airedales) is that the details of dog’s photograph, say in Petfinders or on a Humane Society website, could have a profound effect on how the dog is perceived, and potentially whether it is adopted or not. We’ve all known (or assumed) that a sharp, clear, color photo of a friendly-looking dog increases a dog’s chance of being adopted, but this research adds an entirely new wrinkle to the mix. Could one increase a dog’s chance of being adopted by showing a photo of it sitting beside a child? Of course, this study didn’t look at actual adoptions, and there is a chance that a perception of friendliness and adoptability won’t translate into more adoptions, but it surely would increase the odds. Kudos for Gunter and Walsh for doing the research they did; I hope it leads to even more studies that expand our understanding that most complex and compelling of topics: the relationship between people and dogs.

I’d love to hear your take on this: What drew you to the dog(s) you have now? Did you find the dog on a website and were drawn to a particular photograph? If so, do you know why?

MEANWHILE, back on the farm: Busy times, beginning to get ready for lambing, even though the ground is still frozen solid and we still live in a sea of white. But tomorrow we’ll be mucking out the barn (with the help of some young, strong neighbors, bless them) and I’ll be ordering lambing supplies. The first due date is April 1st, and that is going to come up fast. Usually there is green grass by then, but the chances of that seem to be slight at this point, winter is just not letting go this year.

Willie and I said the heck with winter and worked the sheep up in the high pasture yesterday, it being light enough after I got back from teaching to do so because of the time change. The snow was a bit deep in places, but we moved the girls slowly and I don’t think it stressed them in the least. As a matter of fact, I suspect they need the exercise. Willie and I had a great time, and I’d bet the farm that when we trotted down the farm road to the barn, through the grey-brown and inky black tree trunks, his high tail and head signified something akin to pride.

Before mucking out the barn I’ll go to my Contemplative Photography class. This week’s assignment was on texture. Here is some of my ‘homework,’ taken at a friend’s chicken house when I went to pick up fresh eggs (Thank you Sandi!) 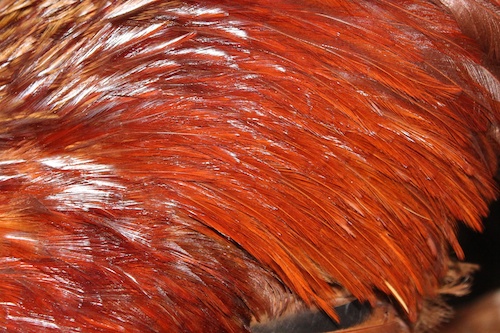 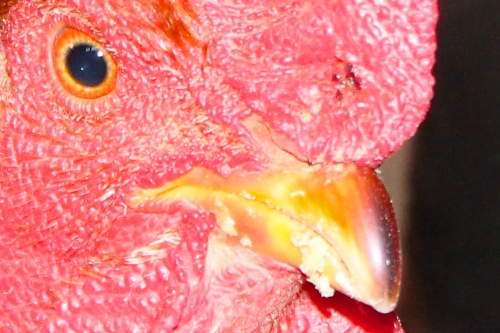 « Response to New Topics Request
Mounting By Any Other Name… »