Earlier I mentioned a possible correlation between reactivity and vision problems, which got many of us thinking about the relationship between eyesight and reactive and/or fearful behavior in dogs. I had remembered that a researcher at UW-Madison did a study on eyesight in dogs, in which GSDs had an especially high rate of myopia, or nearsightedness. That got my attention, given how many reactive GSDs I’d been seeing in my office at the time.

We just found the study, and here is a summary of it: (You can find the entire study in Investigative Ophthalmology & Visual Science, Vol 33, No 8, July ’92, by Murphy, Zadnik & Mannis). The researchers looked at the physical structure of the eye (no one asked the dogs if the marks on the wall were bones or dinner bowls!), to evaluate the eyesight of 240 dogs presented at the UW-Madison clinic, and in 53 GSDs in Guide Dogs for the Blind programs.  In the general study, they found 3 breeds in which over 50% of the dogs were myopic: 53% of GSDs, 50% of Miniature Schnauzers (but note many of those dogs were in the same family), and 64% of Rottweilers. In contrast, only 19% of the GSDs in the Guide Dog program showed signs of myopia.

But there’s more.Here’s a quote from the study that really got my attention: “By far, the most common form of myopia in humans is juvenile myopia; this occurs at 6 – 14 yr of age . . . “. Wow. I had no idea that there was such a thing called “juvenile-onset myopia” in people. Son of a gun. Oh my. No kidding?! Wouldn’t that suggest that at least one significant factor in Juvenile Onset Shyness in dogs MIGHT relate to their eyesight? Someone wrote me recently and asked if I had any good ideas for  Ph.D. project. Well, there you are! I would love to see some research on this; any veterinarians out there who know if there is such a thing as “Juvenile Onset Myopia” in dogs? I’ll ask around too. . .

MEANWHILE, back on the farm: Willie and I have been working sheep every day, twice on a good day. Here are 3 photos I took Wednesday of us working on our “mini-drives.” Our goal is to keep the sheep in the center of the alley bounded by the orange cones.

Notice in this first photo that the lamb’s head is turned to the right. That tells us that he is about to try to go that way, so my job was to flank Willie counter clockwise just enough to head him off, before he makes a run for it. 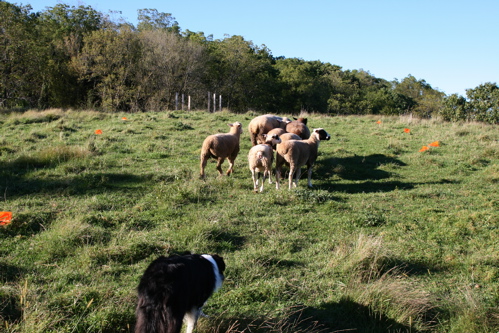 In this next photo,Willie has moved to the right just far enough to turn the head of the lamb, but the flock is still too far to the right. See how they are now right next to the cones? I want them smack in the middle. 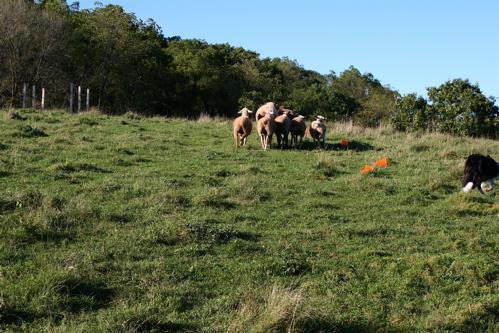 Now we’ve got them back into the middle. The next step, not shown, is to flank Wilie back clockwise, to his left, to keep them going straight. I either just didn’t get it photographed, or it all went to hell in a hand basket, I don’t remember. But overall, it was a great session and we ended on a good note for both of us. 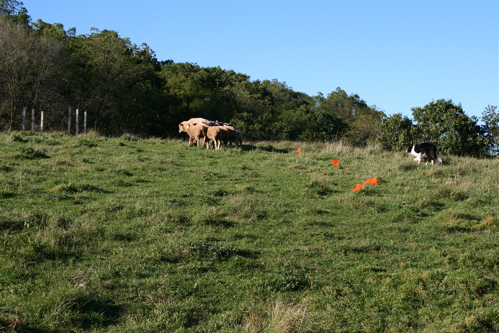 I can’t wait to come home from Seattle and practice some more. (But do come up and say hello in Seattle, there are lots of folks coming and it should be a great weekend. Grisha Stewart is doing BAT training on Saturday, I’m doing a summary of Treating Dog-Dog Reactivity (got some great new videos) and an afternoon on The Biology of Play. Come up and say hi if you can make it!)