Welcome to an ongoing inquiry about the behavior of people and dogs.
Blog Home >> Animals and the People Who Love Them >> Laughed ’til I Cried; Cried ’til I Laughed

I was going to write a follow up blog about over marking, but I want to gather a bit more information before I do. I have to say that I’ve found the comments about over marking absolutely fascinating. I’m going to summarize them next week and will give you a report of what I find. I suspect there won’t be any patterns there, given how variable the sex, status and context of markings that have been described, but if that’s true, it’s interesting in itself. (Keep the comments coming to my last post on the 17th, I’ll post my summary next Tuesday.)

While I’m working on that and Willie’s recovery, here’s a laugh for you. This is another video that is just plain funny, and doesn’t involve intimidating a dog. And we all know that laughter is the best medicine. Wish I could watch old comedies with Willie! The video below made me laugh so hard I had tears in my eyes.

MEANWHILE, back on the farm: In some ways Willie is recovering well. He is eating some food (although not with much enthusiasm, could be the pain meds, could be pain, hard to say), putting weight on his leg, and the area around the surgery is swollen but not unreasonably so. I was, however, blind-sided by the change in the rehab schedule suggested, which is based on what they found in the surgery. Willie’s shoulder has a torn medial glenohumeral ligament, a torn lateral colateral ligament, a moderately inflamed supraspinatus tendon and a badly inflamed bicepital tendon. It’s a miracle how well he was doing before the surgery. Honestly, I’d say that after his 2 months of leash restriction and 2 more months of exercise restrictions only 1 in 1,000 people could see even the slightest lameness when he walked, trotted or ran.

The surgery, in which they cut out the bicepital tendon and attached the muscle directly to the bone (with a huge screw, I almost fainted when I saw the radiographs) should, we hope, resolve the pain related to that tendon, but it won’t affect anything else. So they recommended two months of complete and total “crate rest” in hopes of healing the other tissues. It’s doubtful now that he’ll ever be 100%, which was my motivation for the surgery, but I made the decision to go ahead because I thought I’d always second guess myself if I didn’t do everything I could. He’s had 3 other sessions of leash restrictions for 2 months or more each , and I want us both to never have to do them again. We may anyway, but at least we tried our hardest.

So for two months (with a small chance of sooner) it’s no movement at all, except for passive PT,  unless going outside to potty. THEN we start PT that involves 5 min walks and some active movements of his legs. He won’t be back up to speed for perhaps 6 months, and we won’t know until then how much better he’ll be.

That’s not great news. I was prepared when I took him in on Tuesday that the rehab would be extensive, but nothing this lengthy or confining. But all that has minimal effect on me compared to this: Willie won’t look at me. He refused to acknowledge me when I picked him up at the vet school. He greeted 3 vets and a PT, granted a little bit dopey and drugged, but he still licked faces and said hello. He completely ignored me. It’s continuing still. He won’t cuddle up with me; he sat this morning at the end of the leash, head and body turned away from me and whined while looking longingly up the staircase, waiting for my friend Meg to come down. I’m not making this up, he wants nothing to do with me. It’s blindingly obvious.  At first I wondered if my slight anxiety about picking him up, learning his PT passive exercises, getting all the post-surgical instructions down etc, was making him nervous and so he avoided me. Nope. That’s long over. The only hypothesis I can muster, anthropomorphic as it sounds, is that he attributes the pain and movement restrictions to me. As Meg said “Welcome to being a mom.” Of course, so far I’m the one doing all the passive PT (which he doesn’t like), so that’s not helping.

All yesterday I felt hurt (very hurt, Willie and I are best friends, and after all, he is my only dog now). I tried not to be, buckle up and be a grown up Trisha, but still, it was a tad difficult. This morning it continued, and I cycled from, yes, true confessions, a tad hurt to bit irritated. However, at the moment, everything feels so ridiculously and relentlessly difficult, that after crying on Tuesday over the bad news about his shoulder, and crying on Wednesday over the bad news about his rehab, and then feeling miserable about my dog rejecting me, I’ve evolved into just laughing. I laughed at Willie, laughed at an Alpaca at a neighbor’s who had been shorn to look like a Dr. Suess character, and most of all, laughed at myself. I think I’ll be watching those old comedy movies after all.

Here’s Mr. Will and my dear friend Meg Boscov who came to help me and Willie while Jim moved his mom to Madison. Meg, with Liz Maslow, is the co-founder of Muttmatch in Philadelphia, and I honestly don’t know what I would have done without her. What a wonderful friend she is. 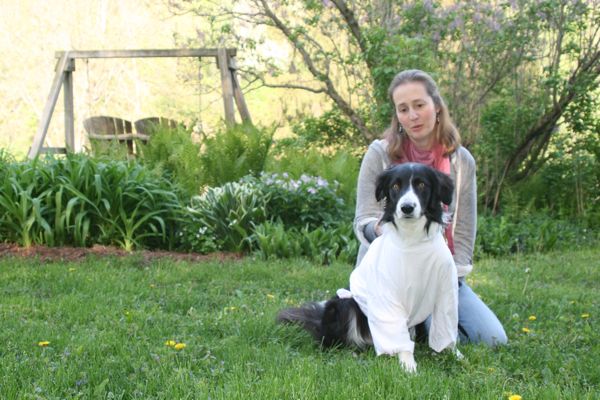 I was going to include a photo of Willie’s shaved shoulder (and back and belly and leg…. jeeez they go crazy with those clippers!) but he has razor burn for one thing and scratched himself badly scratching himself with his back leg while at the vet school, so although “grueseome” is a bit strong of a description of the photo, I thought it was better to spare you all, and include some spring beauty instead. 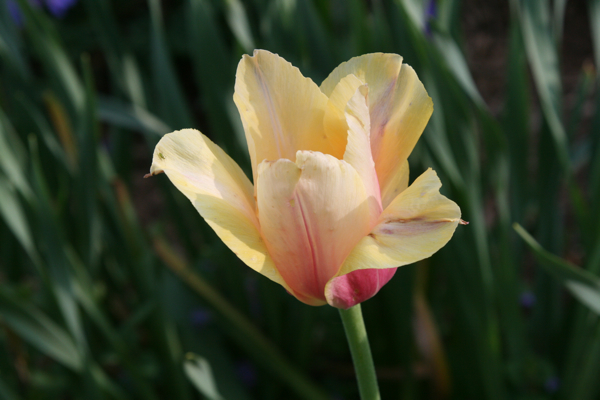 « The Power of Pee
The Mystery of the Overmarking Express »