Welcome to an ongoing inquiry about the behavior of people and dogs.
Blog Home >> Animals >> Learning from a Dog’s Perspective; Winter Wildlife

Whoops… thought I  had posted this last week.  eeeps.

Willie had smoke coming out of his ears last Thursday night; I felt so sorry for him. I was giving a book talk at the west side Madison Border’s and brought Willie along to illustrate some of the tricks that Karen and I write about in Play Together, Stay Together.  He had little trouble with the ones he knows well, but got hung up on transferring a cue from one hand to the other. I have been teaching him to do a ‘high five’ when I hold my hand up vertically, finger tips pointing upward, and to touch his nose to my hand when it is held horizontally, fingers pointing sideways. That’s not a trivial distinction to get, it took him a few days to get it when presented the cue with my right hand.

The day before the talk I had asked him to make the same distinction when I signaled with my left hand, knowing that it wouldn’t necessarily transfer. It hadn’t, at first it was like starting over, but within two sessions Willie was responding correctly to both cues, given by either hands. However, I’d never tried it out of the house, and Will had only done it right a few times. I warned the crowd at Borders (thanks for coming, it was great fun!) that this was new for Willie… both a new trick and a new context, and sure enough, Will performed perfectly on the right hand, and then fell apart on the left.  First he touched when he should have lifted his paw, then vice versa. Soon he began doing both at the same time (so smart). I quickly went back to the hand he’d known so well, but even that threw him. Soon he couldn’t get anything right, and I felt sure that he was mentally panicking. I swear there could have been smoke coming out of his ears.

He looked so worried, and so confused. Willie seems to take learning SO seriously, and if he can’t figure out what to do it seems to fry his brain. Trying to work through it at that point would have been counter-productive. When he is confused he behaves as though he can’t think at all (a feeling most of us know well, me from organic chemistry exams), so we went back to simple things he knows to do. After a few easy tricks, I played fetch with him to give him a chance to relax. We did lots of tricks later on that Willie did beautifully, but I chose not to do any more work on the new trick, because I didn’t think it would help at that point. (That decision resulted in an interesting discussion with the audience about when to work through something, and when to drop it for awhile–not always an easy call to make.)

I’m glad this all happened at Borders–it  was a great ‘teaching moment’ for non-professional trainers. What a perfect illustration of how hard it is to learn something in which you don’t know the goal and you don’t know what the cue is supposed to be. Think about it.  Willie had no idea of the ‘hand up versus hand sideways’ distinction; he well may have been focused on something else entirely. And why would the direction of one hand generalize to another hand? No reason if you’re a dog. And what possible relevance to a dog’s life could a different in the direction of our paws make? I think it’s so hard to remember how very much we ask of our dogs, and how so much of what they learn must make no sense to them. Sometimes I think it’s actually harder for the really smart ones. (I often responded “I”m so sorry” when a client came in and told me how smart their dog was.)

Meanwhile, winter continues. Not as cold as last week, but still well under zero at night, single digits during the day. I have to admit I am sick of having getting dressed being a major event in the day: Put on silk leggings, put on silk undershirt, put on turtleneck, sweater, vest over sweater. Put pants on over leggings, put metallic sock liners under wool socks. Put on boots, hat, scarf, parka, gloves. At night, take off all of the above, put on cuddle duds (soft cozy leggings and under shirt) put on flannel nightgown, wrap up in thick bathrobe, 2 pairs of socks, pull extra wool blanket over other blankets and bedspread, get all exposed skin under the covers while still holding on to the book…

But hey, last night a Great Horned Owl called my way to the barn after the dogs and I followed our deer’s hoof prints up the hill. The coyotes have been yip-howling like some crazed rock band for weeks now, while the snow shines a blue-tinged glow over everything, and even on a cloudy night you can see without a flashlight. It’s spare and quiet and slices everything to the bone. And as much as I’d love a balmy beach right now, I still love it. Most of the time.

Here’s a photo I didn’t mean to take–I just hit the wrong button at the wrong time. It makes me laugh for some reason, so here it is–Willie and the kitchen (your computer is fine, the photo is totally out of focus). 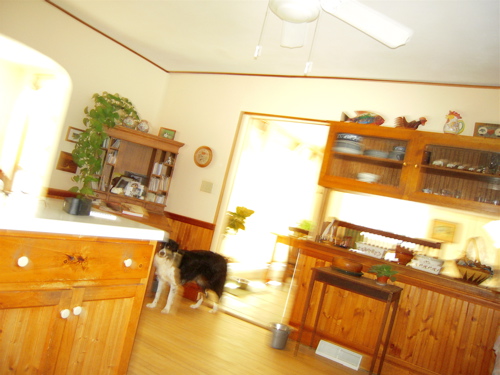