It makes me so happy to say that Tootsie is doing great. Right now she’s sleeping in her crate beside my desk. The door is open, but she loves it there. The only places she likes as well are 1) being in bed with me, 2) being on the couch or 3) being by herself in the crate in the back of the car. She likes it so well in the car crate that I am actually having to train to leave it. I’m assuming this is baggage from her puppy mill days and that she feels most secure and comfortable in a small, confined space.

She’s progressed so well in so many ways: I’m especially taken with her flipping around mid-air when outside after I call her to come, ears flying like a furry dumbo, her open, happy mouth taking up half of her tiny little Cavalier head. As I mentioned in an earlier post, now that house training is behind us (wheee!), she can be outside off leash as long as I watch her like a hawk and keep her close to the house, she no longer barks to wake us up and produce her dinner, so it’s time to continue work on standard training. We’ve gotten started on sitting on cue, but I thought it would be fun to start her on clicker training at the same time.

I’ve worked on sit off and on, never with much diligence, but she is getting the hang of it. I started with lure training–using the smell of a great treat to ‘lure’ her body into a sitting position. Now that I’m going to start her with a clicker, I find myself thinking about the two different methods of training: luring and clicker training. Both have advantages and disadvantages, but I find that combining the two of them can be especially effective in some contexts.

Luring has the advantage of initial speed: In the case of sit, a la Ian Dunbar, you hold a tiny, tasty treat at the crown of a dog’s head and move it back toward their tail (not up, straight back.) As a dog’s nose follows the treat straight back toward their tail, their body finds it hard to stay standing, and so the hips automatically collapse and voila, your dog is sitting. Bingo, the treat gets popped into the mouth and your dog just got rewarded for sitting. Once you have the behavior established, you turn the motion of luring into a visual signal, and then bring in the verbal cue and start minimizing the hand motion.  (For a more detailed description, see The Puppy Primer.)

Luring also has a disadvantage: If you’re not careful to drop out the lure and the visual signal early on, the movement becomes the cue. You can end up with a dog who only sits when you move your hand, not when you say “Sit.”

Clicker training has the advantage of creating razor sharp precision, which helps you communicate clearly with your dog. It’s a great thing to teach a dog that their behavior can influence your own, and in a good way at that. I especially like that in most cases, the dog initiates the action, rather than you ‘helping’ him or her. However, strict operant conditioning suggests that you don’t do anything to initiate the behavior, you wait until the dog initiates him or herself, then click and treat to reinforce it. But truth be told, I’m not someone who is going to wait for a dog to sit when they feel like it, click opportunistically and then wait again for the next time. Not when I can lure a dog into a sit, get 15 reps into one sessions, and then take over with a clicker once I’ve got the behavior started. I tend to mix methods for actions that are easy to lure and for movements or behaviors that dogs do naturally. I should warn you: some trainers feels strongly that methods should never be combined, but I’m an equal opportunity employer, and so have no problems doing so as long as you know how to use them together without confusing your dog.

[10 minute break while Trisha goes to work with Tootsie]

First I used a lure/hand signal (with treat) to raise her chin and get her to sit down. My hand was just inches from her mouth and head. She responded well, and I repeated it 3 times.  Then I moved my hand 2 feet from her head, moved it with the same motion as while luring her (just farther away). She responded well until I moved my hand farther away. Now my hand was so far away from her head its motion probably  looked like a completely different signal. I stopped there because I wanted to  move on to clicker training.

I “loaded” the clicker with 25 click/treats (small dog kibble, which she adores… she adores bird seed shells for heaven’s sake, so finding a motivating treat is not a problem with Tootsie.).

Then I lured 3 times relatively close to her head (to create a success) and click/treated when she sat. I then proceeded to disappear the visual signal, added the word “Sit” and in 20 trials had her sitting just to the word “Sit.”

Ah, but here’s an important lesson: I noticed that while saying “Sit” I held both of my hands behind my back. Wondering if that might in itself be a visual signal, I moved the position of one of my arms. Sure enough, she looked at me as if completely confused. When I put both hands behind my back, she sat again when I said “Sit.” But the cue that she was responding to wasn’t the word, it was the position of my hands. Easily fixed, I just began moving my arms and hands into different positions, saying “Sit” and waiting up to 3 seconds for a response, and clicking immediately when she responded correctly. By the time we stopped she was sitting to the word sit no matter what I did with my hands.

And then… experienced trainers can predict the next stage…. I moved three feet backward into the kitchen. Now I was in a different room. Tootsie again looked completely befuddled. Easy to fix; just critical to remember that any action, any posture, any context, any location can be a relevant cue to a dog. In just a few trials she was sitting just to the word in the kitchen as well as the living room. We stopped so that Tootsie didn’t become a Tootsie roll sausage and I could finish this blog.  We’ll take it up again tonight and tomorrow, and start on some tricks this weekend. Ain’t training grand!!!

Question for you all: I know that some trainers are true purists, only using one method or the other. I’m a fan of mix and matching, as long as one understands the potential pit falls. You? [And fyi, I haven’t forgotten about following up on the clicker study I wrote about earlier (clickers versus just food as reinforcement): I’m playing phone tag with the author, but I’ll let you know as soon as I know more.]

MEANWHILE, back on the farm: Willie and I have 3 new sheep to work. I don’t like working him on my small ewe flock now, because they have young lambs and huge bags of milk that have got to be miserably uncomfortable when they flap/slap around whilst the poor ewe is being pushed by a dog. Willie and I try to work them slowly and carefully, but there are times it’s just not possible to keep them from speeding up. There’s another reason: Willie has lost a tremendous amount of confidence since his surgery and confinement, and my most aggressive ewe, Barbie, has gone after him and won several times now. I hate having a dog fight a ewe with a young lamb but I don’t want her winning over and over again and continuing to erode Willie’s confidence. So I have 3 new Katahdin ewes with no udders and no lambs. They are flighty and easy to move and will be great for Willie while he builds up his confidence. Jim, Willie and I just split the 3 newbies off and put them in the orchard pasture high behind the farm house. It took split second timing and quarter-horse short stopping by Willie, but we got it done. Everytime I see him slam his forequarters into the ground I wince: cross your paws for him that he’s not lame tonight, I can’t help but worry. I’ll do some stretching as soon as I’m done here and ice him if his shoulder feels hot.

Here are the new girls, as yet not named (though I’m leaning toward Chili for the red one in the middle). Okay, they aren’t bathing beauties, but they will have a good life here this summer and will be perfect for Willie and me to get our paws back into the game. Those of you who work sheep know that the one in the middle is going to be the challenge: see that lifted chin? Oh my! 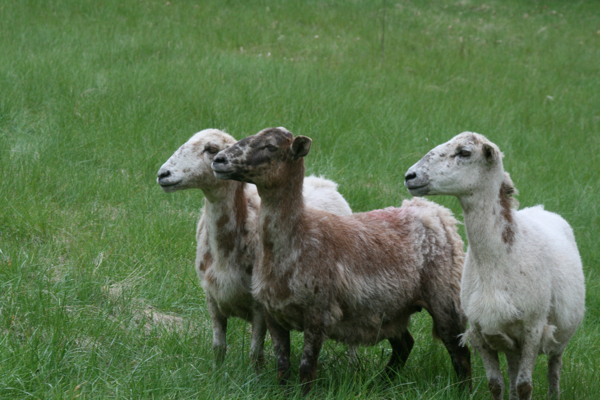 Here’s a wider shot, showing you the only reason I could get a close shot of the sheep! Good boy Willie. 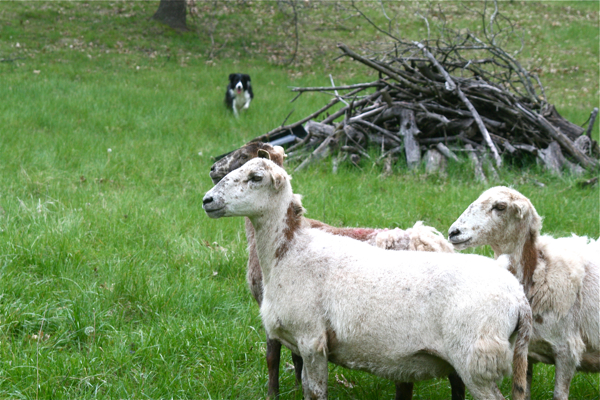