Welcome to an ongoing inquiry about the behavior of people and dogs.
Blog Home >> Animals and the People Who Love Them >> Making the Medicine Go Down: Giving a Dog a Pill

Can you give your dog a pill? More to the point, can you give your dog a pill three times a day without any stress on you or your pooch? A recent online discussion reminded me how difficult it can be to get some dogs to take their medicine, and I thought it might be helpful to go through some strategies that make medicating your dog relatively easy and stress-free. I’ll list techniques in order of easiest to most involved:

1. Mix it in with the food. This is a no-brainer, and it works great for some dogs and some pills. It helps to add some soft and gooey food like canned or cooked meat if you usually just feed kibble. Caution: If you use this method and have more than one dog, you have to ensure that Dog A gets the medicine while Dog B does not.

However, lots of dogs are picky about what they eat, and some medications seem to taste terrible to dogs. (The pain reliever Tramadol is famous for being rejected by dogs because of its bad taste. I’ve always wondered if sometime it related to the fact that it also causes nausea in some dogs. My Great Pyrenees Tulip appeared to be terribly ill because she stopped eating; it turned out that the Tramadol she was taking put her off her food and as soon as I stopped giving it to her she began eating voraciously.)

Here are some ideas for dogs who won’t take a pill mixed into their dinners:

2. The One Two Three Game: First, encase the pill in some highly palatable food, perhaps a piece of chicken or some peanut butter. Put it aside and give the dog a treat with no pill. Then give the dog a second treat. Next, pick up the treat-encased pill and put it right next to your dog’s nose, but don’t let him eat it! Pull it away, as if to tease him. Move it within an inch of your dog’s nose/mouth again and snatch it away a second time. Move it a third time toward your dog’s mouth and let him eat it. Follow it up with a fourth treat, this time with no pill. Unless the pill is truly noxious, this works really well and makes the entire exercise great fun.

3. The Competition Game: Along with #2 or on its own, alternate giving your dog a pill-less treat and giving the treat to either another dog (best), or another living entity in the room, two or four-legged. You are basically trying to set your dog up to see that another food lover is getting the food, and if he doesn’t take his share he’ll miss out. You can do lots of jazz-riffs on this (# of treats, # of times the “other” gets the food) based on your household and your dog’s personality. Obviously, avoid this technique with other dogs if there is any food-related resource guarding in the house. If you’re not married this is a great test of a good potential partner for dog lovers. If the person you are dating won’t help out by being the “competitor,” you might want to look around. I’m just saying.

4. Empty Gel Caps: I’d never thought of this as a solution to nasty tasting medicine until it was mentioned on a sheepdog list serve. It is relatively easy for me to give a dog a pill so I’ve never used it, but what a great idea: You can buy empty gel caps at any drug store and put a nasty-tasting pill inside so that your dog won’t reject it. Smart solution, right?

5. Physically giving your dog a pill. Sometimes you don’t have time to go through the suggestions above, or perhaps you’ve tried them all and they haven’t worked. (Rare, but possible.) In addition, I like knowing how to get a pill down a dog without much stress; it seems like a good skill for any dog owner to have. The trick here is to understand that the muscles of a dog’s jaw are designed to press down, but not to pull the mouth open. That makes it easy to open a dog’s mouth if you know where to put your hands. I’ll summarize here, but refer you to a great photo series on Dr. Sophia Yin’s website that shows you exactly how to do it. You can make it relatively stress-free by conditioning the dog to expect a great treat when you grasp its upper jaw in one hand. Like the One Two Three Game, you hold the dog’s upper jaw with one hand, pull down the lower jaw with the other and pop a treat into the dog’s mouth. Let her eat it, repeat and then eventually do the same with the pill. Follow up with a real treat. Physically it is easier to do than describe in text, so check out the photos above to see where to place your hands and how to hold the treat/pill to get it into the dog’s mouth.

The most common mistakes are to pull the dog’s head up too high (it should be horizontal to the ground) and/or to try to open the dog’s mouth too wide, which makes her begin to fight you because it is so uncomfortable.

This is one of those issues that seems trivial… until you have to do it yourself and it’s not going well and your dog is really sick and is beginning to run away from you when you pick up the pill bottle. How about you? What’s your experience giving your dogs pills? Any good ideas I’ve neglected?

Another medical question for you: Is your Hydrogen Peroxide fresh? Facebook readers know that Maggie ate a lot of dark chocolate frosting a few weeks back, and I couldn’t get her to throw it up after giving her Hydrogen Peroxide. It turns out that the bottle of Hydrogen Peroxide that I had in my medicine cabinet was too old and was no longer was effective. It only keeps its bubbles (that’s what irritates the stomach and causes vomiting) for six months or so. For a week I walked around asking myself:  “How could I have not known that you need to buy new Hydrogen Peroxide every six months or so?” But now I know. Based on the Facebook responses, lots of other folks didn’t know it either, so I mention it here in case it helps a blog reader out someday. The good news is that Maggie is fine, although it took a two and a half hour visit at a veterinary emergency room on New Year’s Day to get it sorted out. Sigh.

MEANWHILE, back on the farm. The weather is wonderful! Mid twenties, partly sunny and little wind, my favorite winter weather. It even went up into the thirties for awhile this weekend, and most of the little snow that we had melted away. We took Maggie and Willie to friend Donna’s to work sheep and for a long walk in the woods afterward. Both dogs did well and had a great time. I thought they’d be bushed while we sat down and watched the Green Bay Packer football game, but no, Willie couldn’t stop bringing us toys to throw even after running hard for such a long time earlier in the day. Good thing he was there to distract us from the end of the game. Ouch.

Maggie also spent time this weekend at our favorite local pet store–I’m on a big push to get her more comfortable around non-Border Collie dogs that she hasn’t met yet. She did really well, and luckily a big black lab owned by a friend came in and I was able to say “Hi Caroline! So good to see you but please stay where you are so that I can reinforce Maggie below her threshold!” It feels so good when conditioning exercises go well, doesn’t it! (I was using the method described in Feisty Fido, with the additional reinforcement of backing up (and thus increasing the distance between her and the other dog) when she looked at the other dog and stayed calm. (Or, at least, behaved in a calm manner; I can’t tell you what her internal state was.)

Tootsie got to do a Pet Pals shift at the children’s hospital last week, and all I can say is that her Oxytocin producing potential is impressive. She lies on her back on a child’s lap and they rub her belly while I say “Do you think you can rub her belly so that she starts to go to sleep?” The children benefit most from the healing powers of oxytocin when they rub Tootsie’s soft, silky belly slowly, and when do, Tootsie’s eyes sometimes begin to droop, which everyone in the room thinks is adorable. It’s a win/win for Tootsie and the patients and everyone else who watches. Last week was especially sweet because the hour was crammed full of children and their families in crisis, who had a brief respite from anxiety and medical treatments by the visits of Tootsie and the other wonderful Pet Pals dogs. Priceless.

I came home from the office to take some photos, and found myself a tad bored with what felt like “same old, same old,” so I took a page from the Contemplative Photography class I took and looked at my dogs from another perspective. 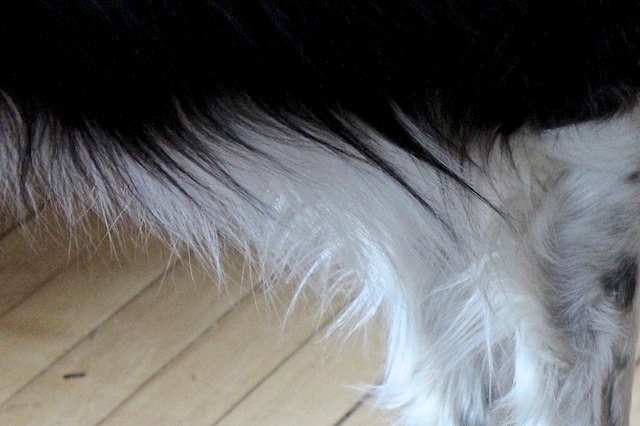 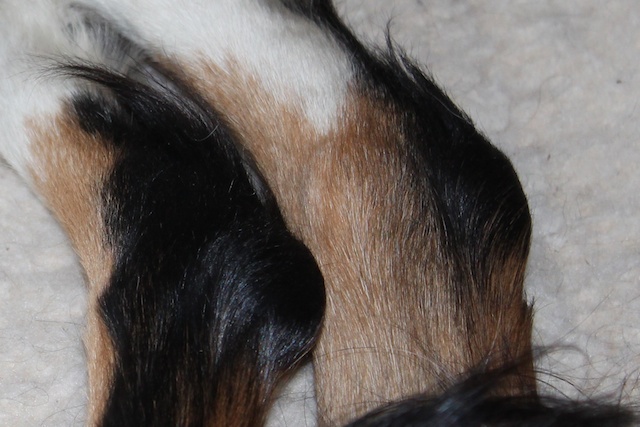 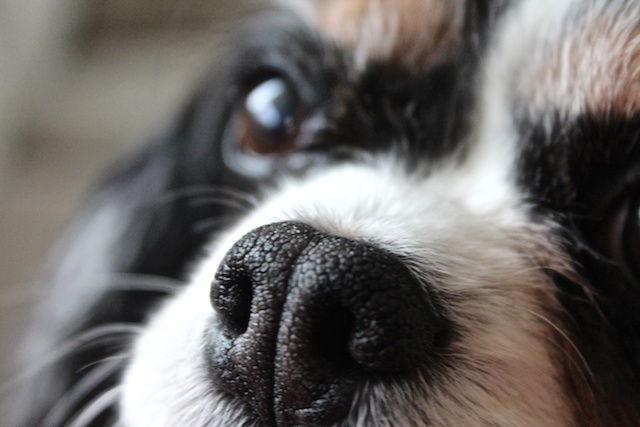 Have you taken any close ups of your dogs lately? It IS really fun to try to get a completely different perspective. And hey, up north in winter we have to look for things to catch our eye!

« The Animals of Belize
New Directions in Canine Behavior: Open Access til Feb 6, 2015 »