Welcome to an ongoing inquiry about the behavior of people and dogs.
Blog Home >> Animals >> Part Wild: Book Review and Ode to Dog-ness

You know I love Willie; sometimes I think almost too much. But I’ve never loved him more than I have this morning, after finishing the book, Part Wild, by Ceiridwen Terrill. Willie is a dog. Inyo, the focus of Part Wild, is a wolf-dog who Ceiridwen adopted as a puppy. The book is a brutally honest testament to the differences between dogs and wolves. I can’t think of anything I’ve read lately that made me more grateful to have dogs, Canis lupus familiaris, as domesticated animals, in my life.

Fair warning: It’s not always a happy story, as wolf-dog stories often aren’t.  Ceiridwen gets herself a wolf-dog pup for all the wrong reasons–primarily to protect herself from an abusive ex-boyfriend who is stalking her. She makes a lot of bad decisions, both related to boyfriends and Inyo, and I will honor her honesty by saying that at times I wanted to reach into the pages of the book, pull the author out and yell “WHAT were you thinking?” When her wolf-dog kills a neighbor’s beloved cat I almost had to put the book down.

But I didn’t, I finished it at 6 AM this morning, (still on UK time) because the book is so good and so honest and so very, very important.  She is flat-out honest about her own problems with OCD, hair pulling (her own), and enabling bad boyfriend behavior. And she is equally honest about her inability to provide a good life for an animal always torn between being wild and living a domesticated life. What comes charging out of the book, page after page, is the profound difference between a wolf and a dog. Typical of a wolf, Inyo is relentlessly active, never ceasing to paw, dig or chew anything and everything around her. She escaped from everything that Ceiridwen built (in part because Inyo was a wolf, and that’s what wolves do, and in part I’m guessing because Ceiridwen made the classic beginner mistake of underestimating what it takes to confine a wild animal, and thus continually taught Inyo that she could get out if she just worked at it hard enough.)

I haven’t worked with wolves much, but I will never forget the wolf-dogs I’ve worked with. One was a five-month old “high percentage” wolf owned by a young couple who lived in a second-story apartment. (The “high percentage” label is often a claim used to increase the selling price of a wolf-dog, but all I can say is that this one looked as wolfie as the wolves I met at Wolf Park). They were having some “obedience” problems. The animal, a gorgeous, yellow-eyed, long-legged sprite, literally bounced off the walls of the tiny apartment when I came out to do a house call. She ran up the walls and somersaulted off, she lept up and over all the furniture with abandon, she chewed my shoes, my hands, my pen, my hair–all with a sparkle in her eyes and a huge grin on her face. It broke my heart, because the couple had no money, no land, no space, no knowledge of what this gorgeous animal needed and nowhere to place this poor animal who could never be happy without a  hundred square miles to roam. I tried to help them find a wolf rescue facility for her; but I don’t know what eventually happened. Most wolf rescue groups are relentlessly overwhelmed with wolf-dogs who have continually escaped, killed livestock or the neighbor’s dog, and/or bitten a person.

Speaking of biting, that’s the other experience I had working with a wolf-dog.  A gentleman (I use the word loosely) came in for an appointment because his wolf-dog had begun biting his wife and was escaping the “fool-proof” pen he had constructed. He seemed far more concerned about the escapes than his wife. I talked at length about the challenges of keeping a wild animal happy in a domestic setting, and my concerns that at five months of age (note the similarity of ages of the client’s animals?) the wolf-dog was already attacking his wife. It was obvious that my words were having no impact, so I finally gave up and attempted to show him how to use counter classical conditioning to treat resource guarding (which was the context of the bites.)

Like many wolf-dogs, “Sierra” was all over me with licks and kisses. After a greeting ceremony straight out of a National Geographic special, I gave Sierra a chew bone, one of moderate attractiveness. Once Sierra took possession of it, I threw a chunk of real chicken 4 feet away, and picked up the chew bone myself. After Sierra inhaled the chicken he came back for the chew bone that I was holding in my right hand. As he approached I moved the bone toward him in an offering. “See? If you give something up you get something better, and still get the first thing back anyway!” I’ve done this with thousands of dogs, and with few exceptions they catch on right away. “Trade Chew Toy for chicken? Yes! Good deal! Let’s do it again.”

But Sierra wasn’t a dog. Instead of taking back the chew toy he stopped and looked straight up into my eyes with a cold, hard stare. I remember every pixel of his face as he, like lightening, bit down hard on my right hand. It was the second most painful bite I’ve ever had, but it was more the calculated message behind the bite that shook me most. “Don’t you EVER touch my stuff again.” That’s how I interpreted the behavior anyway, accurately or not. The man thought it was funny that I’d been bitten, so much so that I found myself wondering if working in a small room with a dangerous wild animal and a sadist was a good career plan.

That pretty sums up the two primary differences I’ve seen, and that Ceiridwen experienced, between wolves and dogs: 1) a wolf’s energy level is off the charts; Inyo and Ceiridwen hiked miles and miles to little effect, and  2) Dogs are, at least compared to wolves, motivated to let humans drive the system. Like most wolf-dogs, Inyo came when called, if she felt like it. She sat or lay down when asked, if she felt like it. No amount of training treats or positive reinforcement made any difference if she had another agenda. What was hers was hers, and she was willing to use her teeth to underscore that arrangement.

Part Wild is coming out in a few weeks, but you can pre-order it now on Amazon. I got an advance review copy because Ceiridwen contacted me for an interview for an article she is writing for Slate. The book is a beautifully written, bravely honest and heart-breaking. I hope it has some effect on discouraging the breeding and purchase of wolf-dog pups, I am sure that’s one of the reasons it was written. She acknowledges, as do I, that there are indeed some exceptions, some wolf-dogs with just the right mix of genes can be happy and safe in a domestic environment.  But they are the exception, not the rule. And as Ceiridwen says, what about their siblings? Where are they? I expect that the book will generate no small amount of criticism–as I said, the author makes no attempt to candy-coat her problems and mistakes. But I for one applaud her for her honesty, and for writing a book that will stay with me for years to come.

Do you have wolf-dogs in your area? It seemed we had a rash of them here in Wisconsin for awhile, but less lately. I have heard that they are still very popular in the American west. True? What about other countries?

MEANWHILE, back on the farm: We’re back on the farm! After a wonderful, amazing and slightly exhausting trip to Scotland and England, we’re home and it’s fall and gorgeous and cool and Willie is full of himself and getting harder to keep quiet. This week we are beginning to let him off leash for a few minutes in the house. Sunday night I put on his hobbles and let him play with a toy since the first time since March. I can’t imagine 2 happier individuals than him and me for that brief period of time. He ripped the toy into shreds in 5 minutes while I stood and grinned.  Last night I gave him another toy, less rippable, and after he played with it for 6 minutes I took it away and put him back on leash. Oh dear, this time it wasn’t all so happy. After I took the toy away he slumped down, head on paws, and looked miserable the rest of the night. Poor guy, wish I could explain. Tonight I think I’ll skip the toy, just let him off leash for a bit.  But soon soon, he can be off leash outdoors! What a day that will be. (This weekend if all goes well.)

Here’s a little fall color from the yard: 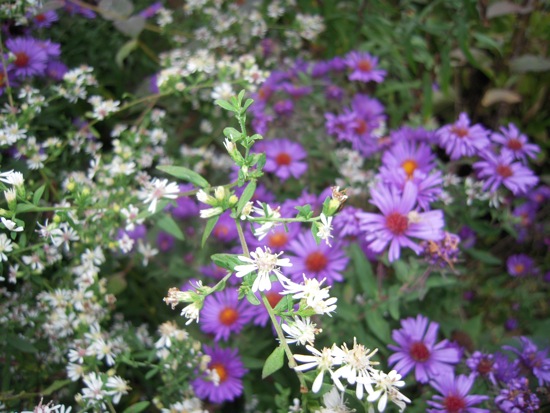