Welcome to an ongoing inquiry about the behavior of people and dogs.
Blog Home >> Dog Behavior >> Play and the “50/50” Rule

Camille Ward and  Barbara Smuts gave a fascinating talk at the APDT Play Symposium on “Play and the Development of Social Relationships in Litters of Domestic Dogs.” Their research (and that of their colleague, Erika Bauer) has focused on play in the domestic dog. They discussed two issues related to play in both puppies and adult dogs:

50/50 Rule: Years ago a scientist hypothesized that, for play fighting to work, the participants would have to switch roles about 50 % of the time. In other words, related to dogs, half the time one pup  should be on top in the “assertive position,” and the other pup should be on top the rest of the time. As Camille explained to us, this speculation, as often happens in science and other fields, slowly turned into “fact” (without the benefit of any actual observations or research!)

For example, look at this quote from “The Development of Aggression” by Tremblay, Hartup and Archer, 2005:

Camille and Barbara tested this assumption in 3 litters which were observed as they developed in about 2,000 instances of play between two individuals (at 3-8 weeks, and at 10-23 weeks for 2 litters, and the third litter also at 27-40 weeks). They found that the 50/50 rule did NOT apply–12 of the 15 pairs in the first 2 litters observed did not reverse roles symmetrically. As a matter of fact, one female from the third litter was ‘on top’ 100% of the time, but her litter mate still initiated play preferentially with her.

In an earlier study, Dr. Erika Bauer and Dr. Smuts also tested the 50/50 rule in adult dogs at a dog park, and Dr. Smuts reported that there too, the 50/50 rule was not upheld. (By the way, it wasn’t reported at APDT, but this work also found that role reversals…. you mount me and then I mount you back….occurred during certain types of play, but not others. Chases and tackles were initiated by either partner, but mounts, muzzle bites and muzzle licks were consistently performed by the same dog. Perhaps certain types of play may be good indicators of social relationships between dogs?  Let me know if this fits with your own observations of play between your dogs or your dog and friends at the dog park.

Another aspect of Dr. Ward’s talk was about partner preferences. She found that (out of 1,300 instances of play initiation), the young puppies from 3 to 8 weeks showed no partner preference, the 10-23 week old pups the same, but the older juveniles (27-40 weeks) began to show strong preferences to play with one other individual from their litter. This preference was stable across time periods, and suggests that dog often form long lasting bonds with other dogs that should be acknowledged. The fact that some of our dogs become close friends with other dogs is, of course, not news to us, but I think it is important to remind ourselves that long-term stable relationships with another dog might be important to the dogs who live with people but not another member of the same species.

I think about that with my Will, who plays with Lassie several times a day, but I wouldn’t say they are close friends.  Will adores a  young Cavalier King Charles Spaniel… Brody, who comes to visit on occassion, but is moving to Florida soon. I’d love to get Will  a play mate, but hesitate to get another dog during Lassie’s last years. I am pretty darn sure she is not interested in sharing any more of  my attention… it’s tough, isn’t it, when you know one dog needs something that is the opposite of what the other dogs needs.  Will does have some other play buddies, but I think I should go out of my way to find him more; he and Brody seemed to have a special connection. I wonder if he will miss him? (I will! Not to mention missing his human!)

Speaking of play–here’s my colleague and dear friend Dr. Karen London, ‘playing’ on our way to dinner in downtown Louisvile. 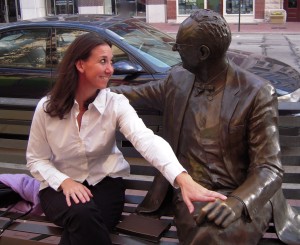 « Play and Self Handicapping
Play Between Domestic Dogs »