Welcome to an ongoing inquiry about the behavior of people and dogs.
Blog Home >> Dog Behavior >> Play Between People and Dogs

Two more posts about play from presentations at APDT: this one about play between people and dogs, and a post coming on Friday regarding Karen London’s presentation on using play to treat aggression-related behavior problems.

I spoke in the afternoon about play between people and dogs. It’s a rich topic, with many nuances and complexities, and I only I had 45 minutes to address it, so I focused primarily on two issues: the importance of clear signals and the importance of pausing to allow emotional arousal to keep from overwhelmed our dogs.

CLEAR SIGNALS: Play bows in dogs are truly unique; there is no other species that I could find that had quite as clear a signal that means “Hey! I want to play, and everything I do next is meant playfully!” (Also see my post on Oct 21st.) In relation to that, I discussed the research of Rooney, Bradshaw and Robinson (2001) who video taped people trying to get their dogs to play (without using toys.) They found that people tried a variety of actions to get their dogs to play, some were effective and some weren’t. (And there was no correlation between how frequently someone tried a behavior and how effective it was! I just love that.. it is so human.)

People, ineffectually, tried whispering, patting the ground, kissing the dog and barking at the dog (to name a few). The effective signals were play bows, lunge toward and away (also called “start/stop” in other literature), running toward and away and adding vocalizations to other actions. I video taped a raft of cooperative people replicating the above, and here’s what came up:

1. People are REALLY bad at playing bows, unless they are willing and able to get down on all fours! (We’re just not designed to do it, you really need 4 legs after all.)

2. Running, as Rooney et al found, is a powerful way to elicit play (and has it’s dangers too… see Play Together, Stay Together by Karen London and me.)

3. “Start/Stop” is the easiest way to get many dogs in a playful frame of mind, but again, can elicit mouthiness or nipping in dogs if you’re not careful.

Keep in mind that the research kept toys out of the picture… as many of your comments have noted: there’s nothing like picking up a toy in front of a toy-loving dog to say RECESS! LET’S PLAY!

The other primary point of my talk was that dogs tend to play hard and fast and then pause, so that play sessions look like strings of play PAUSE play play PAUSE play PAUSE. This is especially true when they are play fighting (and less true, I suspect, when they are chasing and running). Given how many aspects of play, especially play fighting, are the same actions you see in serious fights, it makes sense that something needs to be built into the system to keep them cool. My suggestion is that we need to explain this to our clients in beginning family dog training classes… I think every beginning class should include a “How to Play with Your Dog” section in it. People are going to do it whether we bring it up or not, and besides emphasizing the value of object play, we can give them guidelines and boundaries about other types of play. We all know that play can go bad in a hurry (“I went to a fight and a hockey game broke out.”) and it’s important for us to help owners avoid that.

Overall, I argued that play is a wonderful, wonderful way to enhance our healthy relationships with dogs (and is probably one of the reasons dogs and people get along so well.. play really isn’t that common among adult mammals) BUT, we need to be sure dogs understand when we are and when we are not playing, and play in such a way as to avoid over arousal. Karen London and I talk at length about the value of play, and how to do safely and constructively in Play Together, Stay Together (linked above)… I’d love to get your feedback on the booklet if you have it, on whether you include “How to Play” in your family dog training curriculum and/or more on how YOU play with your dog.

Here’s me playing silly with the same statue from the last post…. 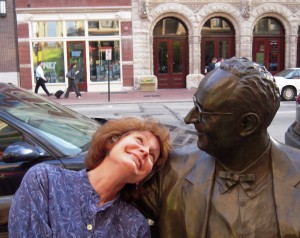