Welcome to an ongoing inquiry about the behavior of people and dogs.
Blog Home >> Animals >> Play Styles & Status Seeking: Correlated?

A short post today, but with a pithy question generated from the last post on play. We all agree that different breeds of dogs tend to have different play styles, with herding dogs, for example, more likely to engage in run/chase games and bully breeds more likely to wrestle and body slam. Wrestling can include many behaviors, but a common goal of wrestling in any species is to pin another individual to the ground.

A lot of the wrestling/body slamming play in canines also includes chin over, leg over, vertical play and other movements that replicate the postures and gestures associated with high dogs seeking high social status.

So here’s the question: Do the dogs (in general of course) who engage in body slam/wrestle play tend to be individuals who care more about social status? I’ll add more to this discussion next week, but tease you with research that shows that you see a lot of role reversals in chase games (one dog in front, then the other) but very few role reversals in other actions more related to mounting and vertical play.

Meanwhile, back at the farm: I admit it, I’m an Olympic junkie. I’m getting sleep deprived staying up at night for heaven’s sake. Luckily, Will has had lots of entertainment during the day–we’ve been working the sheep a lot because all 3 groups are overweight (me, Will and sheep) and slogging up the hill in the deep snow is a great work out plan; we’re working on new tricks, he’s had lots of dog friends come visit and we’re doing lots of cuddling while I obsess in front of the television. We also went into town to do an applied ethoogy demonstration for my UW class, a good experience for Willie and although I’m sure not especially enjoyable for sheep, safe and relatively stress free.

I am also hereby declaring I am sick of winter. Not the snow, not the cold, I’m just starved for color and some change to what’s going on outside. I’d never make it in Antarctica! But there is still beauty: here are some trees covered in frost one morning, not long ago. I love the contrast of the dark trunks and the crystal white ice: 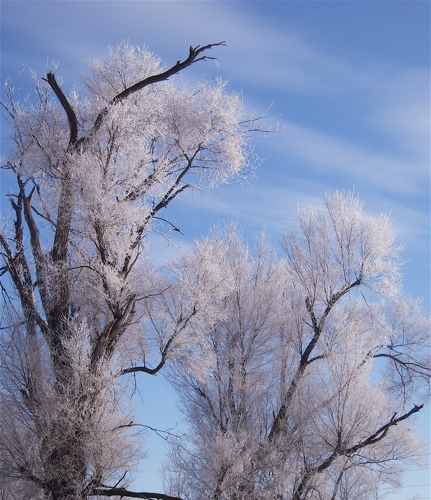