Welcome to an ongoing inquiry about the behavior of people and dogs.
Blog Home >> Animals >> Results: Survey on Emotions in Animals

THANKS to you all for contributing to the survey! I’ll give you the results of the blog survey first and then compare them on the right with a survey done at the Madison Seminar (thanks!) and with research done by Morris et. al. in 2008 (Cognition & Emotion 22(1), 3-20). First, emotions and dogs (of course!)

CAN DOGS EXPERIENCE THE FOLLOWING EMOTIONS?

Pretty interesting, hey? Note that Fear, Anger and Jealousy have relatively similar responses between blog readers, seminar attendees and animal owners as asked by Morris et al. (Although isn’t it interesting that only 93% of dog owners thought dogs could experience fear? Oh my. Look, though, at the answers to Disgust and Guilt. Wow, quite a difference, hey? And only 65% of Morris’s respondents thought dogs could be angry, while 86% of blog readers did.

IF ONE ASKS THE SAME QUESTION ABOUT “ANIMALS:” (And yes, the question does arise, as well it should, what animals? Grasshoppers?  Morris’ research actually asked animal owners: “Is your animals ever fearful?” The respondents could have birds, horses, hamsters, etc. So in that sense I didn’t follow the methods of the research, but I was curious what folks would say to the general question and would like to compare it later to my UW student’s answers, so bear with me….)﻿﻿. You’ll see that the Madison seminar attendees were not asked this question:

* Percentages don’t always add up to 100% because some answers were “don’t know.” In addition, some respondents included humans (logically) and I think answered if ANY animal could, while others answered if ALL animals could. A good example of a poorly worded question! Note to self.

AND  HAMSTERS? Fewer of you responded here, 50 versus 70 for dogs (understandably, and good for you for saying you didn’t know!). Summarizing, all three groups are less likely to attribute all emotions except Fear to hamsters than dogs (Yes to Joy in Hamsters was from 80 to 91% — the highest number from Morris’ research interestingly enough!). For example, 83% of blog readers thought dogs could be jealous, but only 36 % thought hamsters could.

Interesting stuff, hey? Here’s what I plan to do next week: Enroll you in why ALL mammals can experience Disgust, Fear and Anger, show you some research that suggests that indeed dogs can experience something akin to human Jealousy, and agree with many of you that Guilt is a complicated construct that of all the emotions is least like to be similar in dogs and people. (Great research on that to come too!)

Til then, see you in Cleveland I hope this weekend, and if not, definitely in Orlando January 7th for an all new seminar on Canine Communication that I am having a ball working on, or Naples on January 12th for a half-day seminar on using dogs in AAT and AAA (details to come VERY soon.)

MEANWHILE, back on the farm: Oh the weather! Why am I inside for heaven’s sake! It’s been sunny and 50’s, and everyone who has lived here a few years know how very sweet the weather is for this time of year. Tootsie did beautifully with the snow after a few days, but now the ground is dry again so I’m sure we’ll have to start over once it snows or rains again. Her biggest strides in the last few weeks have been coming when called. She’s doing so well I am even taking her outside off leash, but only under certain circumstances: I have incredibly good food and she knows it; we’re behind the house and she can’t be distracted by cars on the road; I know she needs to pee;  Willie is beside us and is under 100% vocal control and she pays some attention to where he goes; and, most importantly, we only stay out for 3-4 minutes maximum.  In other contexts she’s on leash and I practice calling TOOTSIE COME! and run the other way and give her treat treat treat for turning and running to me. I gotta tell you, there’s not much cuter than watching her fly across the grass, ears flapping like Dumbo, tail turning like a crank, mouth drooling in anticipation of treats.

And good news on the Willie front too. He’s progressed enough that he gets occasional times outside without the Hobbles (rare and short), and today, for the FIRST TIME since February, I took him up the hill behind the house and let him run free (with Hobbles on, but still…) I’ll take it back a notch tomorrow and keep him extra quiet until I see how he does. We go one two steps forward and one step back, but mostly we’re going in the right direction. My dream of working him on sheep in November is gone (today was going to be the day, by the way. I circled it on the calendar many months ago.)  His PT says probably not until well into 2012. Deep breath. We’ll be okay, it’ll come before we know it, and at least he can be off leash outside now for awhile.

Willie and Tootsie are about the same with each other. They continue to pretend that they are the only dog in the house. They do sneak sniffs more often when the other isn’t looking, and Willie gets my eternal gratitude for tolerating all kinds of rude behavior from her. He lets her lick food out of the same plate (allowed after the humans are done with dinner), ignores it when she dances on his head to get up to our faces, and let’s her take over a sleeping place without so much of a grumble. Again, I see no love lost, but they seem to be accepting each other as the new normal. I’ll keep you posted.

It’s gorgeous outside. I just wish I was able to spend more time out there. But it is great to feel like we’re getting ready for winter. Our chest freezer (large enough to put a cow into. Standing up. Well, okay, not quite, but it’s HUGE) is full to the brim with strawberries and raspberries and rhubarb and apple butter and chard and broccoli and spinach and 1/4 of a kindly raised hog, an entire lamb from the farm, and 15 organic, local chickens. And a gazillion other things. Trips to the market will be little more than orange juice and toilet paper, flour and sugar.  And best of all, all the ewes have been bred by the new ram, King Charles. (I named him KC because he seemed tiny to me when he arrived. I named him after, you guessed it, King Charles Cavalier Spaniels).

Here’s the evening sun on the back hills behind Lady Godiva, Spot and Rosebud, who have come down for their nightly alfalfa. This was last week, now the snow is long gone, the sun is shining and it’s warm and balmy. 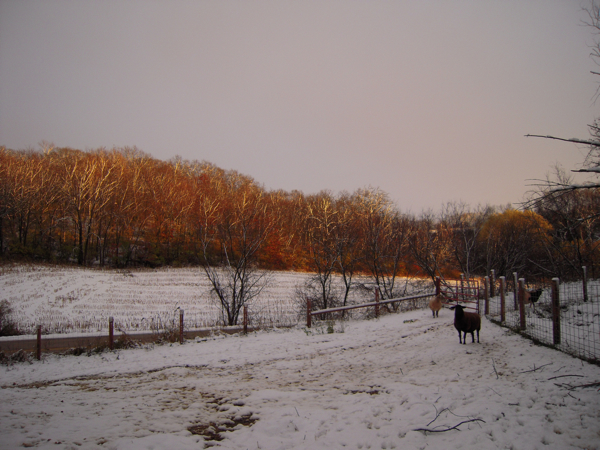 I love the patterns of snow on branches and sun on leaves: 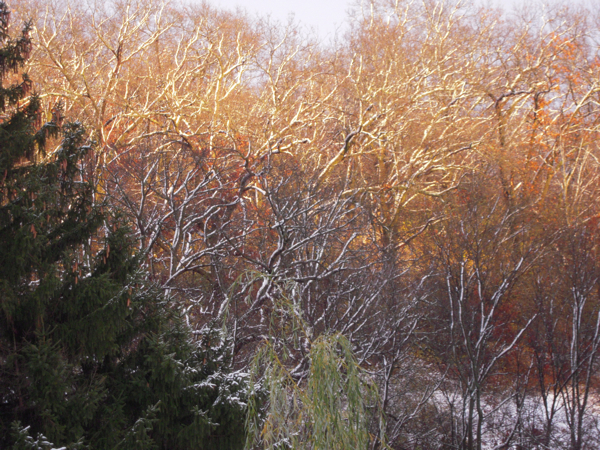 « What Emotions Do You Share with Your Dog?
See you in Orlando! »