Welcome to an ongoing inquiry about the behavior of people and dogs.
Blog Home >> Canine Cognition >> What Emotions Do You Share with Your Dog?

Surely you’d agree that both you and your dog can be frightened, but what about feeling jealous? Guilty? Ashamed? Ah, now it gets trickier, doesn’t it? Emotions like jealousy and guilt are called “secondary” emotions, and many biologists, psychologists and philosophers believe that non-human animals can’t experience them. The argument is that they can’t be experienced without a relatively high level of cognition, particularly the ability to be self aware and knowledgeable about the mental state of others.

I’ll talk in the next post about research related to whether dogs feel guilt or jealousy, but for now, I’d like to replicate another piece of research that asked people what emotions they think animals experience. [If you came to the Madison Seminar, no fair answering after you saw the research results!]

So here’s your question: Which of these emotions can animals experience? (I ask the question as it was asked by the researcher. I’ll ask next about dogs specifically.)

Answer by copying that list into a comment and force yourself (sorry) to say Yes or No after each of the 6 emotions listed. We’ll total up your answers and compare it with research done a few years ago, and with the answers we got from the audience in Madison at the Advanced Seminar.

Here are the same emotions:

Now answer Yes or No if this time we’re asking about Dogs. Then answer for a different animal, a Hamster. We’ll report back on your answers and how they compare to the general public, the Madison audience and what the research says in about a week’s time. No fair writing about the research yet if you know about it, we’ll all talk about that after the ‘survey’ comes in.

MEANWHILE, back on the farm: Brrrrr. First real snow, along with bitter winds, sleet, rain, the whole nine yards. Tootsie has already explained to me that she couldn’t possibly walk on just plain old wet grass, so cold, snowy grass, she explained to me this morning, is out of the question. But we’re making huge progress. Here’s what has worked well so far:

1. Obviously, the best treats in the house came out once the rain began last week. Tootsie learned she gets cooked lamb heart for walking on wet grass, instead of commercial dog treats if it’s dry. She taught me it was much more effective to drop the treat on the ground rather than hold it in my hand, so I learned to drop a trail of treats from the garage to the grass to lure her out. (Thank heavens Willie has a great “leave it!” Boy has it come in handy lately!)

2. Treats helped tremendously, but I think the biggest factor in getting her onto wet grass (which she does now willingly) was that she wanted something even more. Tootsie was obsessed with cars when she came to the farm; I have absolutely no idea why. Does she associate them with her escape from the mill? Did someone drive up to feed her every day? (The Amish don’t drive but they often will be in a car that someone else does.) So I “Premacked” it. If she came out and peed on the wet grass (a low probability behavior) she got to run to the car and leap and dance around it, and even get put inside (a high probability behavior.. she’d do anything when I first got her to be allowed to run to a car.)  Why she loves this so much I may never know, but it clearly was what she wanted more than anything in the world–so much so it was hard to get her past a car for the first 2 weeks, so I just used it as a reinforcement.

So we’ve got wet grass taken care of, and house training has been going exceptionally well. Now on to the next challenge: walking on snow and ice. Oh my, poor little girl, this will be a challenge for her, what a switch for her after living all her life inside. Picture me cooking up lots and lots of extra good treats for snow falls…

Willie is being SO good with her. I would not say he is happy she’s there, but no more snake face and mostly he looks happy and content. Every once in a while I think he looks sad, and I assume it’s about her, but it seems less and less, especially as he gets more and more freedom and he’s learned that our belly rub sessions on the living room floor are still part of our day. She’s also getting a little less pushy (although we have a long way to go there, but one day at a time.) 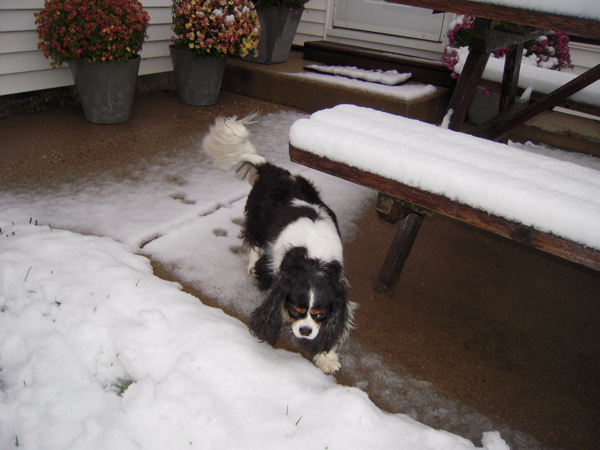 Success! I lured her out with raw meat dropped on the ground. She paused at the border, so I gave Willie a bunch of treats as she watched.  Ah, the power of another dog!  Finally she ventured out onto the snow and got 3 treats for it. Then, bless her, she sniffed around and finally squatted and urinated. This got her 1) pieces of lamb kidney, 2) much clapping and ridiculous celebrating from me, 3) the chance to run back to the car and dance around it and 4) the chance to go back into the house (whence she also got more food, more excitement, and belly rubs.) I’m sure we’re not done with this, but she’s making great progress, none-the-less. I’ll be buying her a little coat soon. (I can not believe those words came out of my mouth. Me? Buy a dog a coat? Really? But she is truly so frail right now, I just can’t imagine her dealing with 30 below weather.) 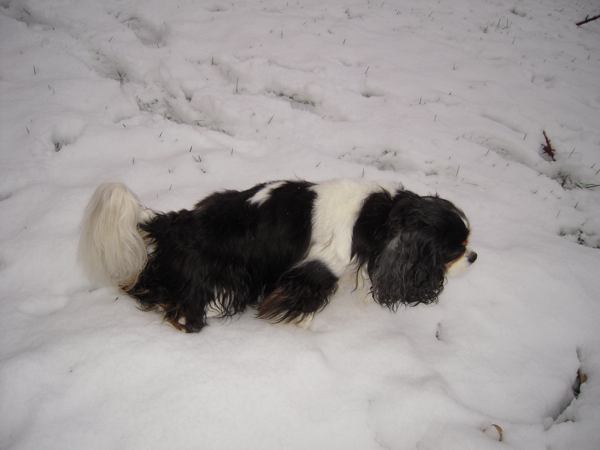