Welcome to an ongoing inquiry about the behavior of people and dogs.
Blog Home >> Animals >> Scientific American Mind and Your Dog

I just arrived in Atlanta, and am about to settle in, go over my seminar for tomorrow and then watch some foolish movie that does nothing but entertain me and put me to sleep.

But I wanted to write about a magazine that I just can’t get enough of–Scientific American Mind. If you are interested in behavior, both your own and your dog’s, this is a fascinating magazine. It’s true it helps to be fascinated by behavior and the brain (I guess that’s obvious), and that to some it will be far afield from canine behavior.. but that’s what I love about behavior… it is such an eclectic field.

Here are just some of the pages I have marked for further review (and future blogs, articles or book sections….) in the Oct/Nov issue:

p 10: Researchers at the Zhejiang University in China found that honeybees, who have been famous for years because of the ‘waggle dance’ they do in the hive to direct other workers to food, actually learn much of the dance. Many have assumed that ‘bee brains’ were only capable of dancing because of innate ‘hard wiring,’ but bees with different dances from different countries (almost like an accent or a dialect of the same language) were able to learn the other’s dance when they were raised together. How does this relate to your dog? Well… the issue of what is innate and what is learned is still controversial, and how interesting it is to learn that bees with a tiny swelling of neural tissue that can barely be called a brain, can still learn…

p 11: Magpies look at predators with thier left eye (thus stimulating the right side of their brain) and at something interesting but not dangerous with their right eye (stimulating the left side of their brain.) That is especially interesting to dog owners (honest)… did you see the research that found that dog’s wag their tail more to one direction to friends (right) and in another direction (left) to an aggressive dog? I’ll write more about that research soon, but it suggests that many animals have lateralized brains, not just humans with expanded cognition (which some have argued.) I’d love to see more research looking at lateralization and canine behavior. (Did you know that most dogs are ‘left pawed’ but ones who are ambidexterous (holding down a Kong with either paw) have a higher incidence of separation anxiety, just as people who are ambidexterous have a higher incidence of generalized anxiety?)

p15: People who can’t seem to heal from the loss of a loved one (and of course, I’m thinking dog here) react more strongly to reminders of the loved one in the area of their brain called the nucleus accumbens. It’s the area associated with reward, and the anticipation of something good. They don’t understand yet exactly what is going on, but it is interesting that they’ve found a different physiological reaction in people who are still grieving than people who have healed from a loss.

There is also a great article about memory and its fluidity (we pretty much make it up as we go) and the power of the unconscious.. very relevant when people start arguing that only humans are conscious (now there’s a can of worms!)

And oh yes, there’s more. There’s an ad for a new book of conversations bewteeen the Dalai Lama and Paul Ekman. Ekman is the psychologist who did so much work on the facial expression of emotion in people all over the world and was gracious enough to let me use some of his photographs in For the Love of a Dog. I can’t wait to get this book……it should be fascinating. The comparison of the expression of fear, anger and happiness on the faces of people and dogs is truly amazing…

Meanwhile, here’s a little fall from the farm, just to remind me of home while I”m working in my hotel room…. 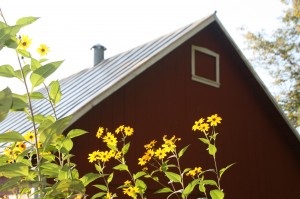 « APDT, Tales of Two Species
The mystery of play »