Welcome to an ongoing inquiry about the behavior of people and dogs.
Blog Home >> Animals and the People Who Love Them >> Skip for the Win!

[Caution: The following contains details of sheepdog trials and a video of one of Skip’s runs. If that bores you to tears, no worries, I won’t be offended. Just skip this; I’ll see you next time!)

We’re just back from the Nippersink or Swim Sheepdog Trial outside of Lake Geneva, and in spite of blustery winds, cold, and rain, we had a truly great time. It was great to see people we only see at trials (friend Dan said “It’s like going back to summer camp”), to work on a gorgeous field with challenging sheep, and to let the dogs do what they were born to do.

To say that the sheep were challenging is an understatement. They were super reactive, meaning your dog had to work far back away from them to avoid a mad dash to the barn, which drew them in like a massive magnet. The sheep beat the dogs more often than not, illlustrated by lots of letters for scores rather than points. As in: R for Retired–handler leaves the post to help their dog, and DQs–the judge calls the team off to protect the sheep or because the sheep are off course).

I took almost no photographs this time. I was too busy saying hi to friends, running or prepping my dogs, or huddled shivering somewhere trying to stay out of the wind. The video below is of Skip’s first of three runs in an intermediate class, “ProNovice”, in which we were allowed only four minutes to complete the course. We placed 5th for it, instead of the first we got in our third run, but I like this video because it contrasts the times where Skip and I were doing exactly what we should, with the sheep in perfect control, and the times where we weren’t. A great primer on what we need to work on. It’d be fun to have had a video of that third run, which turned out to be the winning run, but honestly, it’s more interesting to see the ones that don’t make it look as if nothing else could possibly happen. “Perfect runs,” or ones that are close, make it look so easy that you can’t imagine any other way that it could go.

On this first run, (video below) I was worried about his outrun, because he runs big and wide, and the Nippersink Creek, which is pretty wide itself, was close by on our right hand side. You HAD to send right because that was where the sheep wanted to go to get back to their barn. The draw between the sheep and the barn is so strong it’s as though there is a stretched out bungee cord connecting them. (There are also two bridges over the creek that the sheep use all the time when they are grazing). I gave Skip a “come in” whistle as he went toward the creek, and my heart dipped when he disappeared into it. But he popped out by himself (whew!) and ended up overall with a good outrun to the back of the sheep. (19/20 points)

He did a good lift, when the dog “makes contact” with the sheep and gets them moving, although watching the video I thought it was a bit fast. He can get sticky on the lift though, so I didn’t want to interrupt him. The judge liked it though, (10/10 pts), so I figure that she and Skip knew best. The lift is where the sheep are basically introduced to the dog, and it can make or break the entire run. If the dog is too close and pushy, the sheep bolt and fight the dog the entire way. If the dog seems too cautious, the sheep take advantage and simply beat the dog at its own game. Handlers far more experienced than I said, about Skip and a few other dogs, “the sheep really like him,” meaning that they trust a dog to take over but not harm them. Which is exactly what we all want–to have a dog that is a good shepherd to the sheep. So all good there.

Next up is the fetch, when the job is to bring the sheep in a straight line through two gates, directly to the handler. Most of the time on this run Skip is doing exactly what you want: Keeping “contact” with the sheep, keeping them moving without scaring them, and responding to my whistles to make short flanks to get the sheep straight through the panels. However, after we got them through, at second 42, you can see Skip flank so wide he goes out of the frame. He got away with it on these sheep; you can see how far away the dog has to be to effect their behavior, but it’ll hurt him in other trials. I’m working on him “staying in contact” when asked; it’s a work in progress.

The Fetch line was pretty good though. (18/20 pts. The judge is looking at where the sheep are, not where the dog is), and he brought them right to me. I couldn’t believe that one of them started sniffing my pocket! Being like deer around the dogs did not translate to their reaction to people. The drive is where we lost most of our points. Because it was a narrow course, we had to drive the sheep back through the Fetch panels, and then through a second set of gates to our left. Driving is my biggest challenge right now, and it showed in this run. We tried to get back through the Fetch panels but missed them on the left. I had to bring Skip back around because if they didn’t go well past the panels, even if you miss them, you can get DQ’d.

But for the rest of the drive, watch for the times that Skip “has a hold of the sheep,” when he is “on contact,” right behind them, with them trotting in front of him but not running away. It’s almost like the dog has the sheep on an invisible leash. It’s sort of an amazing phenomenon, and it’s exactly what you want: The sheep relaxed, with the dog putting exactly enough pressure on them to keep them moving but never scaring them. (One of my favorite parts of the trial was the reminder of the judge, Linda Tesdahl, that this sport is fundamentally about being good shepherds and taking care of the sheep.)

I didn’t handle things especially well on the second leg of the drive, but we scooted them through the gate panels and got the sheep in the pen, although but not before the judge called “Time,” one second before I got it shut. So we got no points for the pen, and 15/30 for the drive.

If you’d like a laugh, watch how I, middle name Clumsy, walked myself into the gate while trying to shut it. We ended up with 62/90 points for the run. Not a great score, but good enough for 5th.

Our second run was okay but sloppier, but Skip took everything he learned and pulled it together beautifully for our third run. We scored a 77/90, and had the sheep on line and in hand just about the entire time. I got very, very lucky at the end though, because as the sheep got to the pen Skip orbited way way WAY off contact, but the sheep went in anyway. I thought and thought about why that happened, and realized a few hours later that he did it because I messed up the pen on the second run and exhausted him trying to get them in when there was no chance that we could. I should’ve retired to save him being exhausted and beaten by the sheep.

The summary of our first trial is that I love that our third run was so smooth, it felt great. It feels like Skip and I are dancers learning how to mesh together well under pressure. However, I am not happy with myself for not retiring when I should’ve on the second run. I made the same mistake with Maggie, who did a gorgeous outrun and lift in Open, fearlessly fording the creek that most dogs saw as a fence, but got beaten by the sheep on the drive. I get caught up in the moment, and get too focused on completing the task. That’s the big lesson I learned this weekend, let’s hope it carries over to the next trials. My goals were to have fun and learn something new. Goals definitely accomplished! Thank you to Margaret, Tresa, Nancy, John, Hixie and many others for working so hard to put on the trial. And thanks to the judge, Linda Tesdahl, who is a class act and an inspiring woman.

MEANWHILE, back on the farm: Jim and I left the trial mid day Saturday, in part to get back home before some big storms moved in. Lucky we did; turns out that our friends in their own campers had to huddle in the farm owner’s basement because of a tornado warning. It poured rain and hailed and the creeks got so high that one of the bridges was washed out, the other under water. They carried on Sunday I’m told, just re-structured the course. Do not mess with people who live in the country.

Oh, you sweet, naive little House Finch! I finally figured out that this is the nest of a House Finch, not the Phoebee who is always perching nearby. Regrettably, the nest’s structural integrity is dependent upon the shovel that I use almost on a daily basis. I should’ve taken the shovel off the first time I saw any activity, but I got busy and didn’t. Please join me in laughing that, yeah, I’m going to leave her alone and buy a new shovel. I need one anyway, right? (Actually, this shovel just needs cleaning and sharpening, but let’s pretend together, okay?) However, now that it’s finally getting warmer (at least theoretically, I was shivering outside this morning), we’ll be in this area a lot, and she’ll either have to habituate to us or find another site. 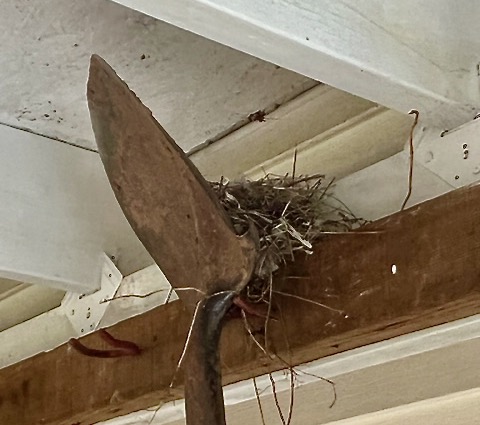 The ridiculously cold and rainy weather has result in some very happy Daffodils. I have hundreds in the yard–they are my favorite bulb. No one eats them (I’m talking to you deer, chipmunks, and squirrels) and they proliferate all by themselves. I fertilize them every year after they bloom, which admittedly takes hours because I have many hundreds of them, but it’s well worth it in late April and early May. 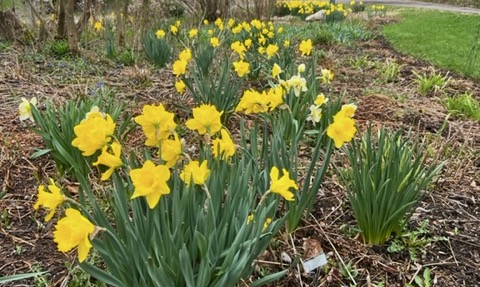 Not much more this week, the garden and the novel are calling. I hope you are savoring either spring or fall where you live, and that, most of all, you and your loved ones are safe and warm.