Welcome to an ongoing inquiry about the behavior of people and dogs.
Blog Home >> Animals and the People Who Love Them >> Take a Bow for Teaching a Play Bow

Our good friend Debby G came to visit recently, with a report on how her dog Monty was doing. Monty was found on a porch a year ago spring, starving and close to death. Here’s a photo of the poor thing soon after he was found. 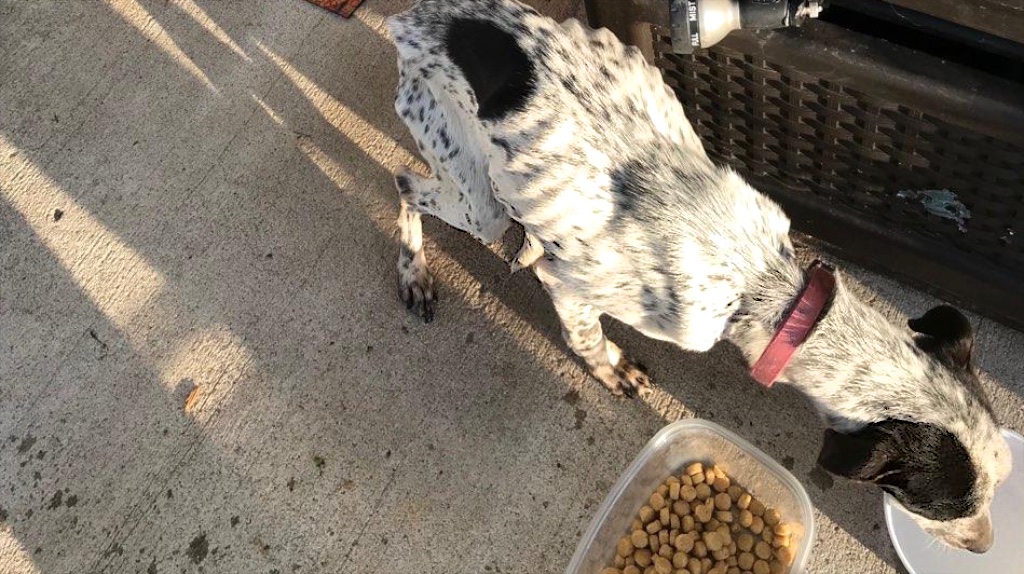 Not surprisingly, although physically healthy now, Monty has a lot of fears, including even the sight of another dog. The good news is that Debby is a dedicated dog owner, and that she has a great team of trainers helping her. Her primary goal is to walk Monty down the street without him freaking out every time he sees another dog. They are making good progress, walking in parallel with one of those worth-his-weight-in-gold Goldendoodles who is stable, unreactive and probably hoarding dog food to deliver to rescue organizations if he could just get a hold of the car keys. I had only a few thoughts to add to the treatment plan, and one of them was teaching a play bow. As I said in a 3/19 post about  working with fearful dogs:

It’s hard to be fearful when you’re playing, and that’s true for both people and dogs. One of my favorite cues to teach nervous dogs is to Take a Bow  . . . “bowing”  is a play solicitation gesture to dogs, and it’s hard to be nervous and playful at the same time.

Monty reminded me that my absolute, all-time favorite trick to teach ANY dog is a play bow. I’m not actually sure why we call it a trick, since it’s no different than a sit or down–we simply put something that dogs do anyway on cue, right? Sit and down themselves are interesting, in that they ask a dog, in some ways, to squelch it’s forward movement, to pause, to contain itself. They are great ways to get a dog’s attention, and, let’s be honest, to get him under control.

But a play bow? Ah, hello fun! The dog may move down and backwards, but the move is friendly, relaxed, and an invitation for lots of action in the near future. Putting a play bow on cue has so many benefits that if I were queen I’d decree it be a part of every dog training class in the universe. (Is it in yours?) 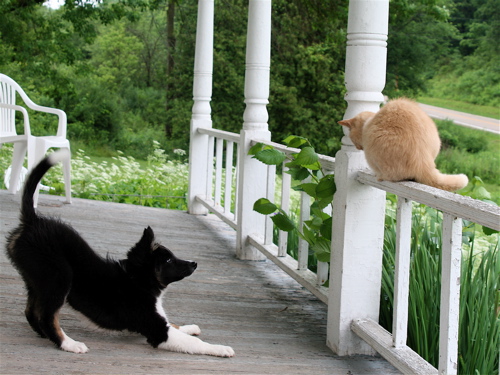 The benefits of putting a play bow on cue are many:

THEY RELAX NERVOUS DOGS As I mentioned earlier, asking a dog to do a play bow automatically leads to relaxation. I taught Willie to play bow on cue, and used it when we were working on his response to unfamiliar dogs. Not only was it successful in that context, but after a while he began doing it on his own when he was beginning to feel stressed. At least that was my strong impression. Besides being an action integrally involved in play, a play bow also asks the dog to stretch and relax his muscles, which leads to another one of its benefits:

IT’S GOOD FOR YOUR DOG’S BODY Dr. Chris Zink (PhD, DVM and goddess of canine sports medicine) writes and speaks often about the importance of stretching out a dog’s muscles before exercise. A play bow is a great way to do that. In “The power of the trick” she describes a range of exercises we can do to keep our dogs healthy, starting with a play bow before any physical activity. Dr. Zinke knows more than any one I know about canine physiology, structure and health, and if she says we should be asking our dogs to play bow before exercise, we would do well to pay attention. In her fantastic seminar at APDT in October, 2017, she explained that the vast majority of sports injuries are soft tissue injuries from over use, not from a specific incident, and are often undetected by both owner and GP veterinarian. Stretching can do a lot to prevent that kind of progressive injury. 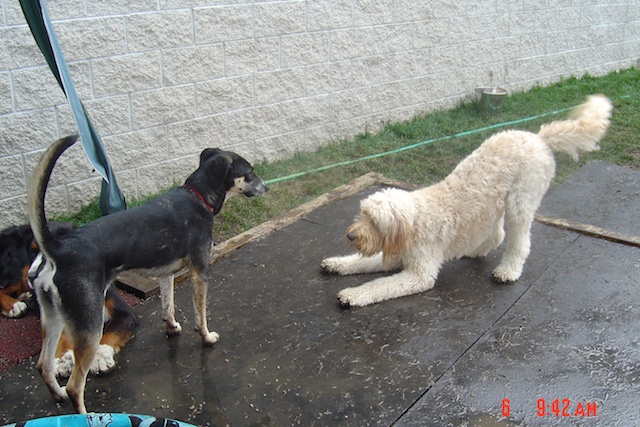 ITS THE PERFECT “INCOMPATIBLE BEHAVIOR”  Is your dog doing something you’d rather she didn’t? Barking out the window when another dog walks by? Scratching at the door to go outside? One of the best ways to deal with an unwelcome behavior is to teach the dog a different response to the trigger stimulus. See another dog out the window? Then do a play bow and good things will happen. Want to tell me you need to go potty? How about a play bow instead of etching into the door frame? Just be careful not to let it “say” too many things–be thoughtful about how you want your dog to use it to communicate with you.

IT MAKES US HAPPY  Do you, or do you not smile when your dog does a play bow, even if just in your heart. Well, that’s enough right there, right?

If I wasn’t so happily busy training Maggie to run in Open, tending my ever expanding garden, and cooking things I probably shouldn’t (I’m talking to you, apple galette.) I’d have made a brilliant video for you illustrating how to teach a play bow. Ah, but I am, and I didn’t. Here’s one from Kikopup, my favorite source of training videos:

And if you have a dog who insists on lying down–here’s one on teaching a bow from a down:

And by the way, here’s Monty now… lucky boy, hey? 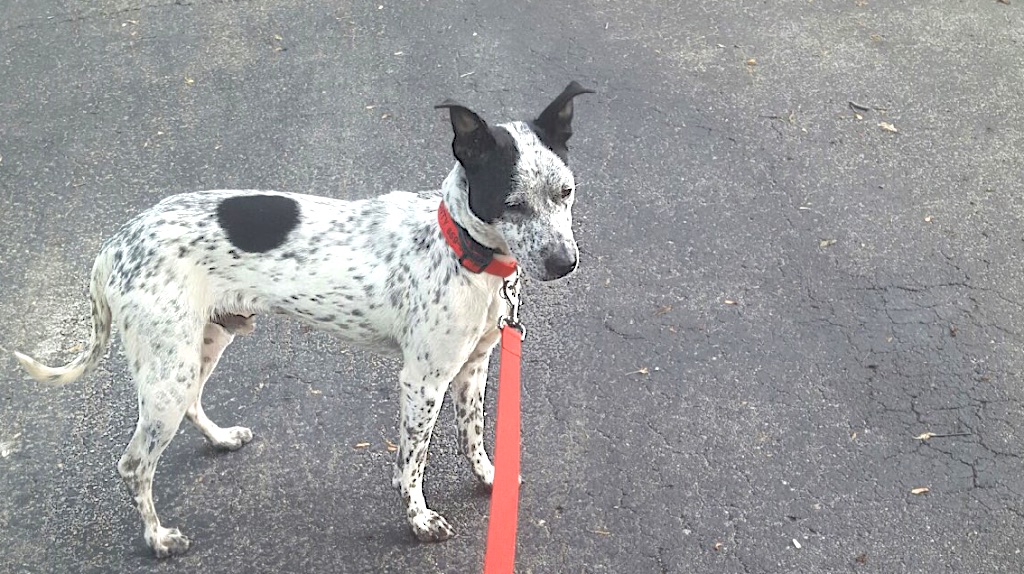 What’s your favorite trick? Or top three? Is a play bow in your class repertoire? We’d all love to hear.

MEANWHILE, back on the farm: We had over 7 inches of rain in three days last week. Good grief. But at least it wasn’t 12+ inches in 12 hours like we had a year ago August. There is some minor flooding, but nothing like we had last year, and nothing, of course, like the poor citizens of the  Bahamas and parts of the Southeast coast of the U.S. My garden is beginning to look like an experiment on “how many plant diseases can one accumulate relating to wet ground and too much moisture”? But there’s still lots of color, including in these late blooming day lilies. But that’s not all that’s alive in this photo. Look closely. 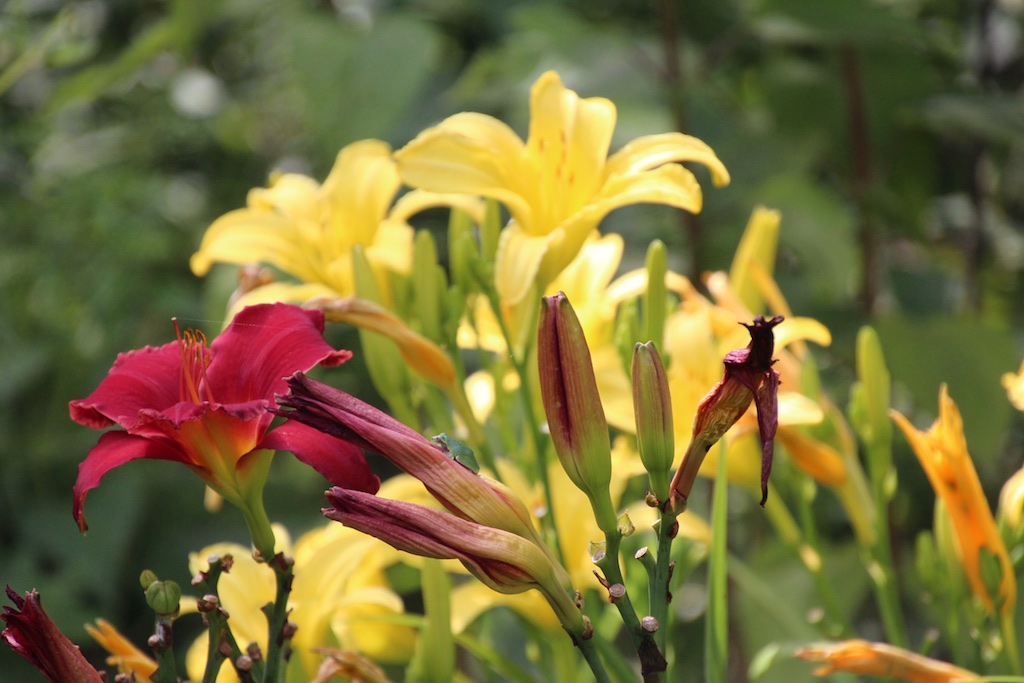 Maggie, Jim and I had great fun on Sunday at friend Jennifer B’s in northern Illinois. Maggie got to work sheep in a new environment, I got some good coaching from far-more-experienced Jennifer, and Tootsie had a lovely time exploring the gardens and meeting new dogs, including this friendly guy here. 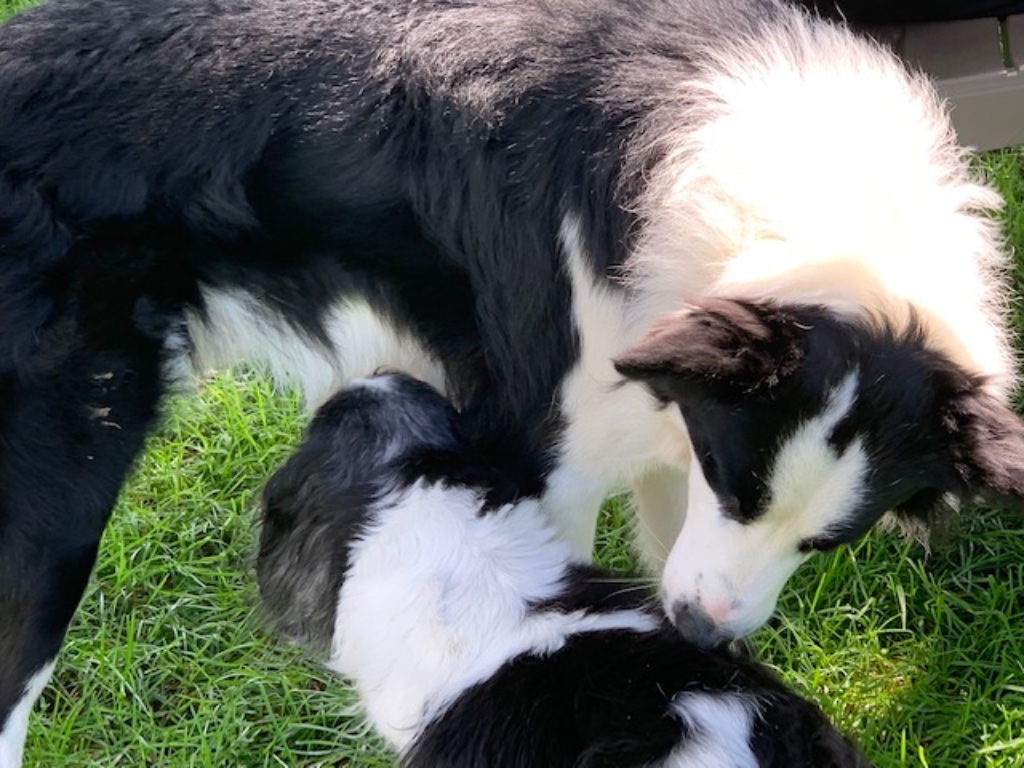 Pea soup fog this morning on the way to the office. I snapped this on the way, but didn’t want to stay long by the side of the road, the fog was thick enough it felt dangerous. I like the dreamy quality of this, especially after I changed it to black and white. 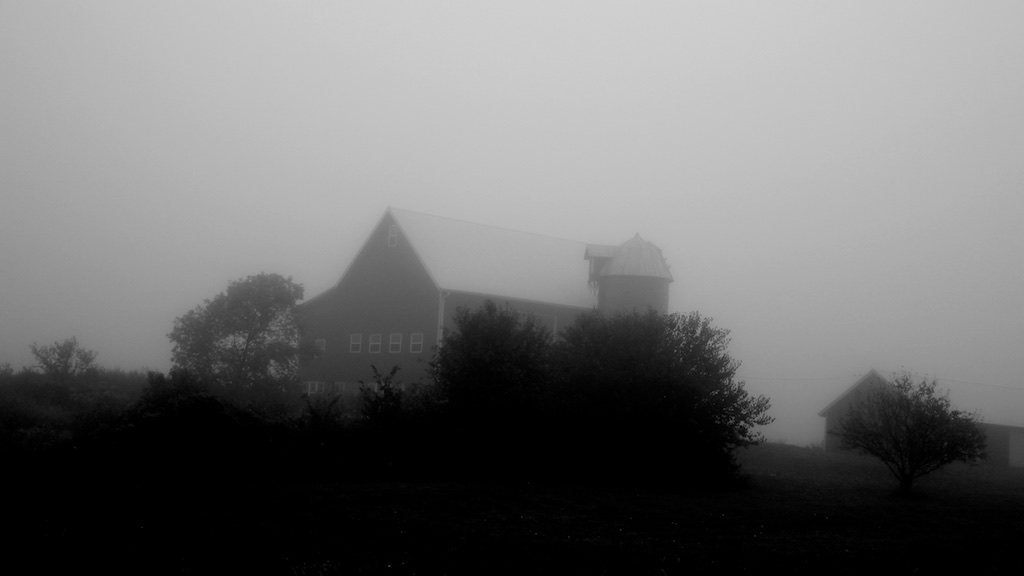 That’s it for this week, be sure to chime in with your favorite tricks and when/why you use them.