Welcome to an ongoing inquiry about the behavior of people and dogs.
Blog Home >> Animals and the People Who Love Them >> Talking to Other Dog Owners–Tread Carefully 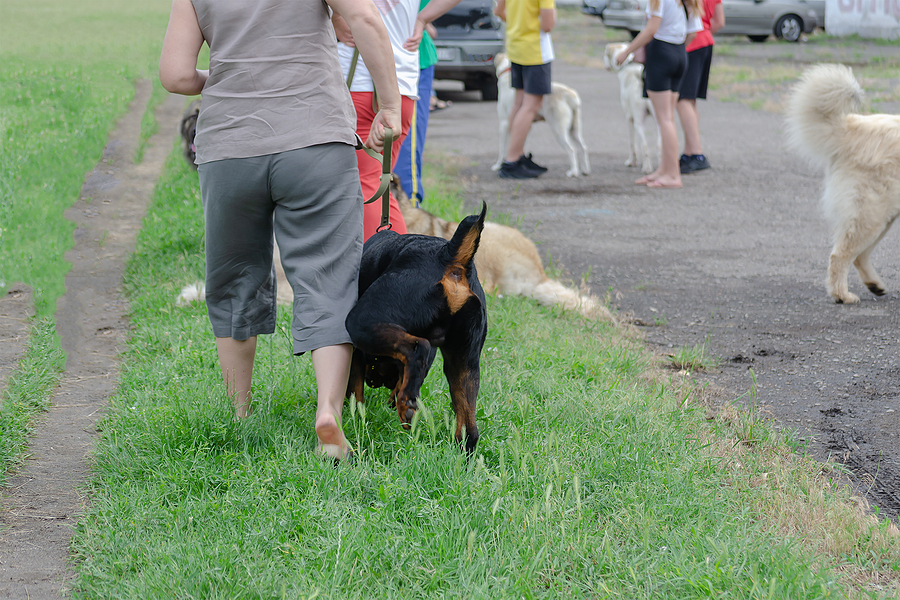 I’m taking some summery time off this week, and so am repeating a post from May, 2014, How to Talk to Other Dog Owners.  Wanna talk about it?

When I was seeing a lot of clients I could always tell when I was tired because I started working with the dog, rather than training the owners. Perhaps that’s the irony of language: It makes communication easier in one sense, and harder in another. Things were so simple and clear when I was working with someone else’s dog. Trying to influence the behavior of the people felt much more complicated. It is not that I didn’t enjoy it–I love people, they are one of my two favorite species. It’s just that it was harder to work with them than the dogs.

It’s no surprise then that talking to someone you’ve never met about their dog’s behavior is especially fraught. Whether it’s at the dog park, in the neighborhood, or at a dog class, we’ve all struggled with what to say to the person whose dog is terrifying ours, or whose dog REALLY doesn’t want you to pet him even though the owner is begging you to. I thought this issue was worth a discussion, given how often it comes up in the comment section. I’ll add in my own thoughts, but very much look forward to hearing what you have to say. I’m hoping for a benevolent interchange of constructive ideas about how to influence the behavior of others when one feels the need. I want to avoid piling on about “how stupid” other people can be. The foolishness of others may be rampant in some contexts, but just whinging about it never seems to help. Here are some of my thoughts, in hopes of initiating a constructive conversation:

WORK THE DOG, NOT THE PERSON.  First off, do you need to intervene immediately because you think your dog is at risk? If so, I strongly advise forgetting about trying to influence the behavior of the other owner. Saying “Call your dog!” or “Get him away” presumes that the other person 1) believes that action is immediately necessary, 2) has the ability to act instantly and 3) has the kind of control over their dog that the action requires. Good luck with that. I’ve found it much more useful to ignore the owner and work with the dog, whether it’s a body block or tossing a handful of treats or turning and moving away to distract the dogs from a tense encounter. Yes, it’s polite to ask if you can give someone else’s dog a treat, but if an 80 pound Chessie is running full bore at my dog, ears pinned and hackles up, I’m throwing a handful of treats in its face and asking questions later. (Of course, none of this is relevant if the dog is actually attacking your own–see here for a discussion about handling serious dog fights.)

PEOPLE ARE ANIMALS TOO.  Remember the value of positive reinforcement? I’m often amazed at how quickly people forget to use PR as soon as they turn away from their dog and start talking with a member of their own species. If the situation is not an emergency and doesn’t require immediate action, I always say something positive when I first meet someone’s dog, even if it is “Harvey has the most beautiful tail!” If you want to say something to someone about their dog’s behavior, you darn well better start with something good. (The exception, of course, is when an immediate intervention is necessary as discussed above.) I learned early on how defensive people can be about their dog, sometimes even more so than about their children. I had clients quit a class once because the trainer said something about the breed’s typical behavior. It wasn’t meant to be a negative comment, just a brief mention about the breed being “mouthy” because they were bred to retrieve. That was enough to send the owners out the door in a huff. That might be a bit extreme, but let’s face it: Whether we should or shouldn’t, it is natural to see dogs as extensions of ourselves, and criticisms of our dogs are never welcome. We can criticize our own dogs, but someone else’s? Not so much.

That’s why if someone’s dog is playing in an inappropriate and rude manner, I’m going to say “Wow! Chester is full of energy, isn’t he! I’ll bet he wears you out by the end of the day.” I might go on to describe my own dog as “sensitive” and “easily frightened,” and explain that it’s nothing against their dog, but I need to end the play session. Have I “educated” them about appropriate play behavior? No. Was this a good context in which to try to do so? Nope. It was my job to protect my dog and keep everything and everybody on an even keel. Which leads to my next point…

WHAT’S THE GOAL? Ask yourself. Why do you want to influence the other person’s behavior? If you want to protect your own dog, do so. Putting the other owner on defense won’t help anything and it might make things worse. Are you concerned about their dog? Perhaps their dog didn’t sit when asked and they jerked hard on the leash and screamed at it. Ouch, these situations are so painful to all of us. But you can’t go up to a stranger and tell them that they are abusing their dog. Sometimes you just have to walk away, painful as it is. Other times I’ve had some success by walking over (treats in pocket, always treats in pockets, heaven help me…) and commenting on what a lovely/handsome dog they have. “What breed is it?” I might ask. I may know perfectly well, but it doesn’t matter; the goal is to start a conversation. Or I might say, (lying through my teeth, yup, you heard it here) “Oh, I used to have a Saint Bernard/Poodle/Yorkie cross myself! That was the best dog! Can I give Rambo a treat?” And then Rambo and I have a little interchange and I walk away and leave it at that. Maybe the owner learned something about how quickly Rambo paid attention and did what I asked, maybe they didn’t. But either way I did not take it onto myself to be the dog police and tell someone how to handle their dog. It’s hard sometimes, but it is not our job to train other people’s dogs or raise their children.

Lest that sounds harsh, let me be clear that I am all in favor of helping people who want help, role modeling good behavior, educating people who want to learn, and being there for a dog who might need some clarification about what is expected. That said, we’ll all be most effective if we remember that 1) advice from strangers often feels like criticism, 2) sometimes it is easier to communicate directly with a dog, and 3) positive reinforcement usually works best. Here’s my last piece of advise, before I pass the baton on to you to hear your best ideas about how to defuse a conflict with another dog owner:

Picture me, a client and a client’s dog, out walking in a neighborhood. Be aware that the dog is frightened of unfamiliar people and we are out to do some counter-conditioning. The challenge in this process is that so many strangers want to walk up and overwhelm the dog, rather than toss treats from a distance. Here’s what I learned to say, as someone begins to swoop in to loom over the cowering Sheltie, or MiniPoo, or Border Collie, or Mastiff: “Oh thank heavens!” I say, as I move between the person and the dog. “I can tell that you are an experienced dog person! That’s just great, because this dog is afraid of strangers and needs someone who understands the importance of staying back and tossing treats rather than going toward the dog and scaring it! SO many people don’t understand that, except people who have lots of dog savvy like you! Would you mind helping us for just a moment and tossing some treats on the ground for Maggie?”

I learned to say this after hearing, many hundreds of times, “Oh, dogs just love me” (mostly women) and “I’m not afraid of dogs!” Both of these comments were always made as a person bent forward, hands outstretched, face moving laser-like toward a cowering dog in response to my request to toss treats. You gotta love training, no matter the species, right?

What’s your story? We’d all love to hear comments about your most successful (or unsuccessful) intervention. How have you learned to talk to others about their dog? Anyone ever talked to you about your own dog and set your teeth on edge?

MEANWHILE, back on the farm, some photos for you to enjoy! First, the hummers are back feeding in front of our living room window. There are now two females competing for access to these Bee Balms. I took this while sitting on the couch! 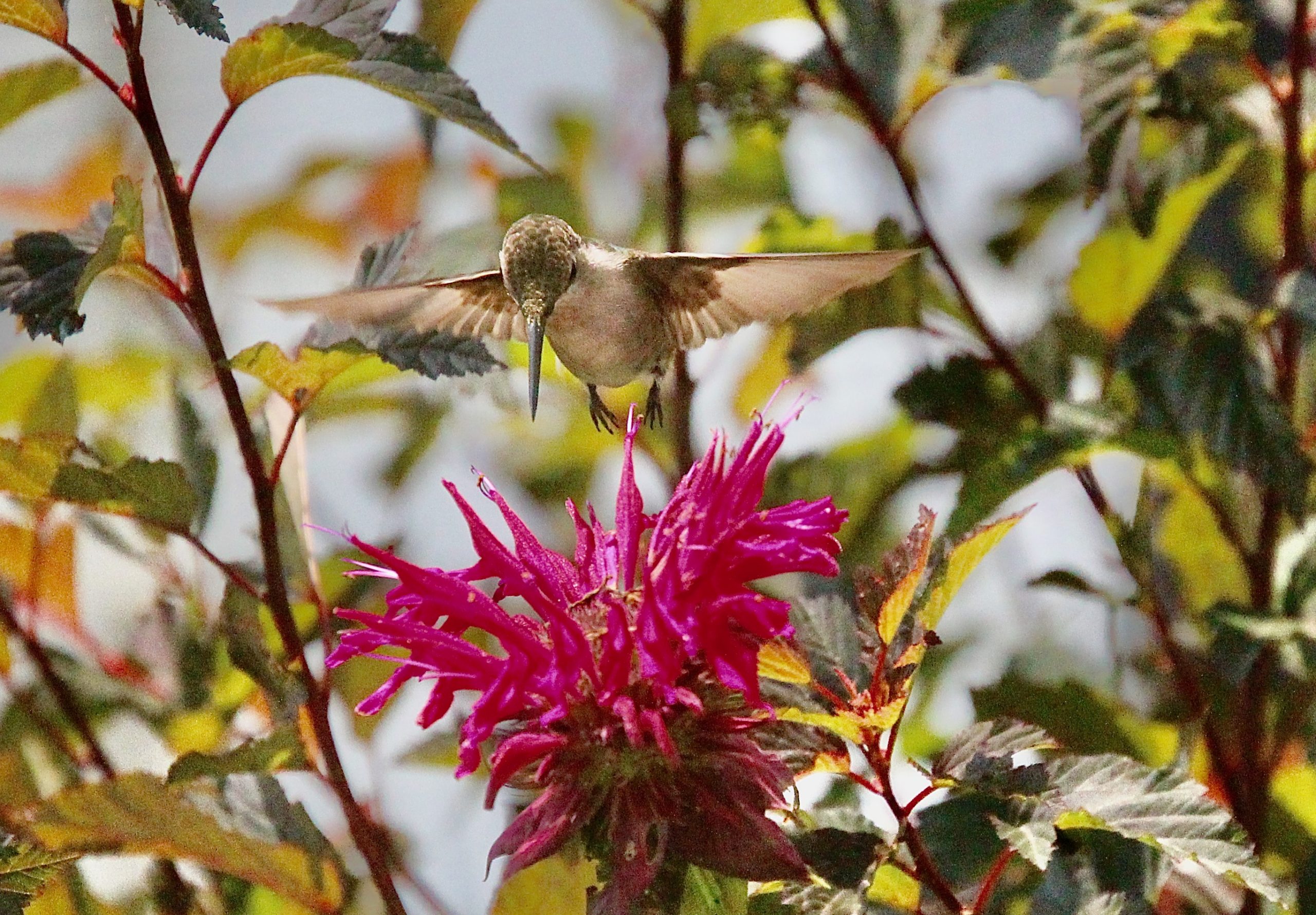 Here she is again: 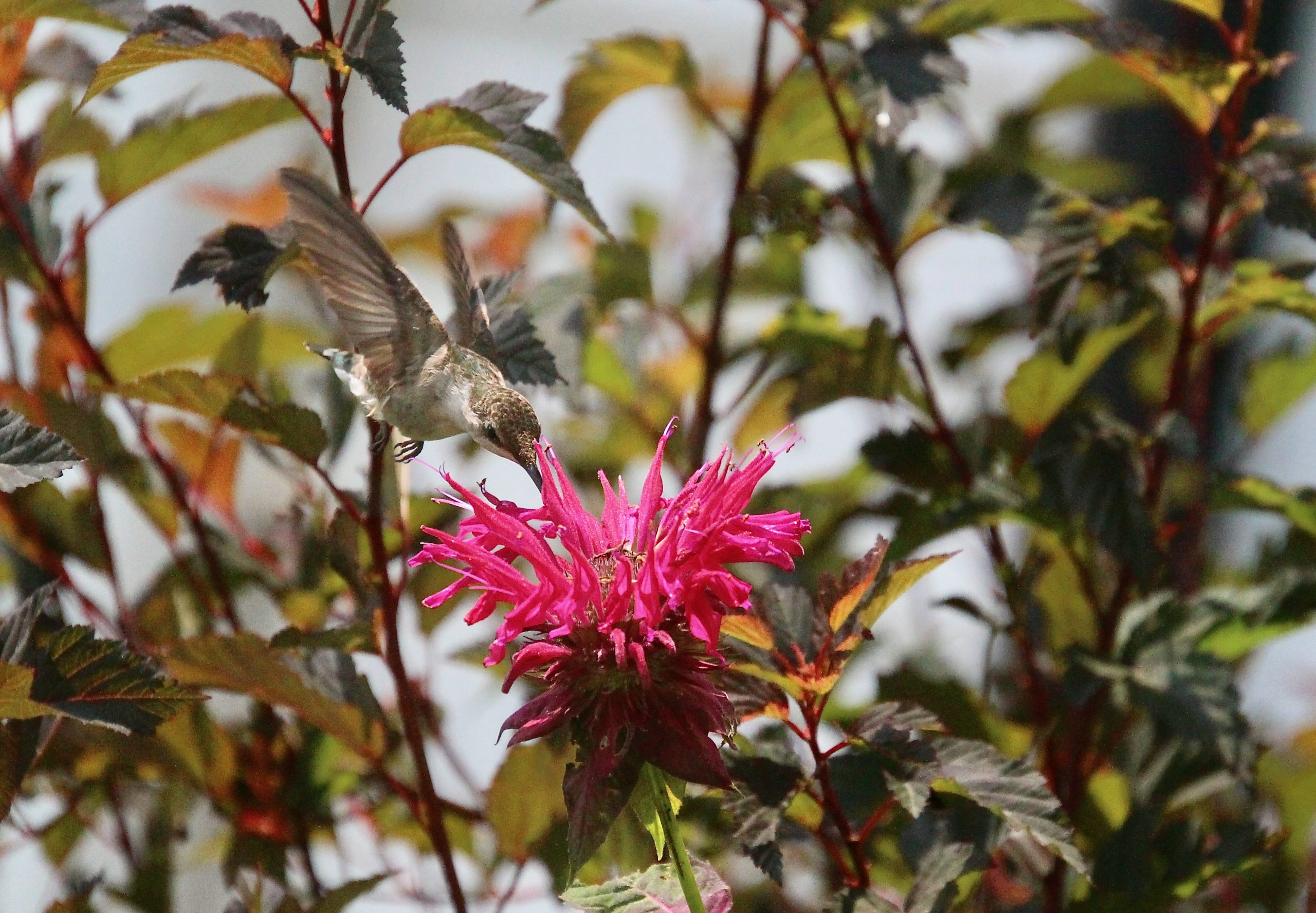 The flowers are in full bloom now, it’s a riot of color out here. Not sure if this Zinnia bud is aware that there’s something behind it . . . 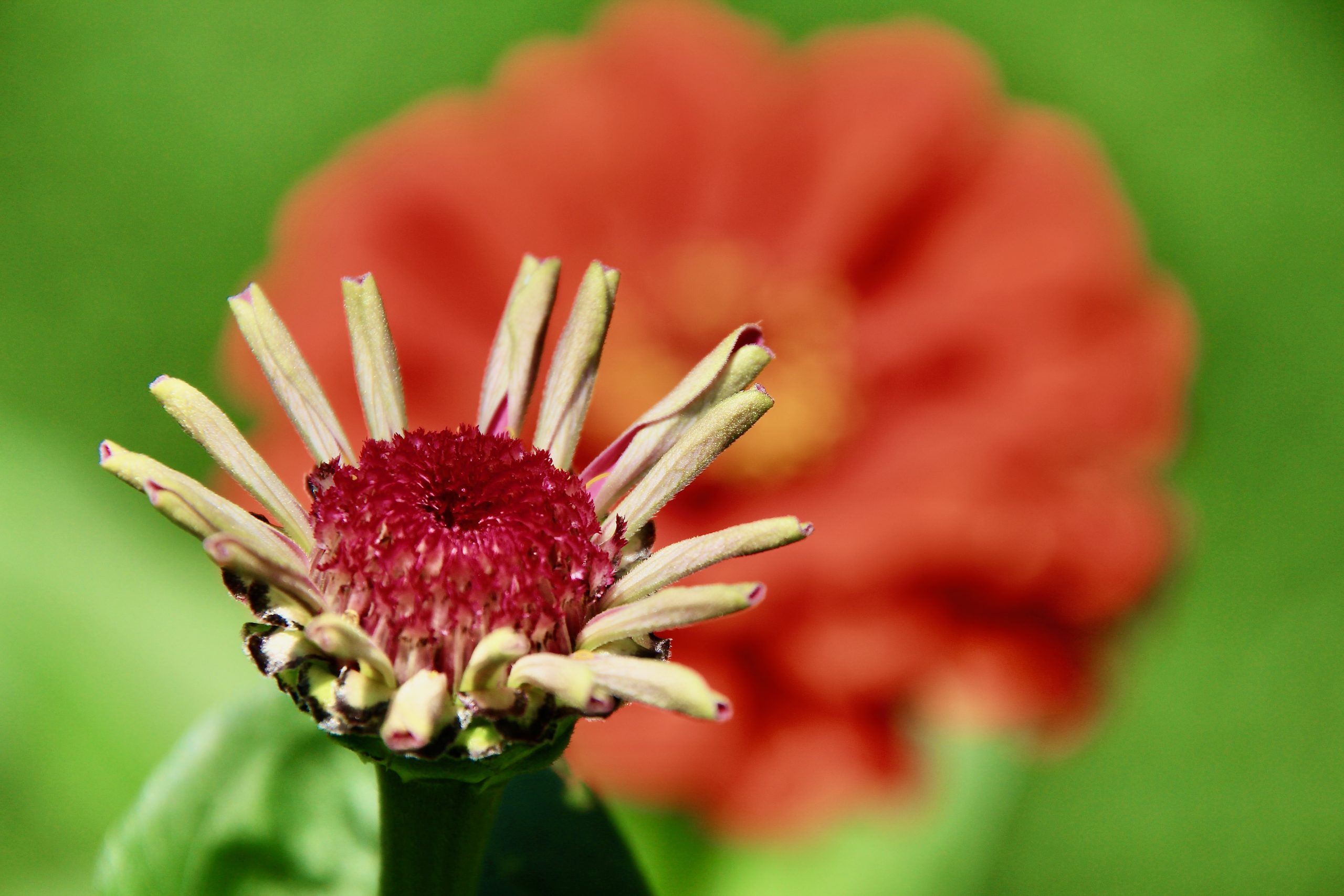 I had fun playing with this photo of Skip; I like it best in black and white: 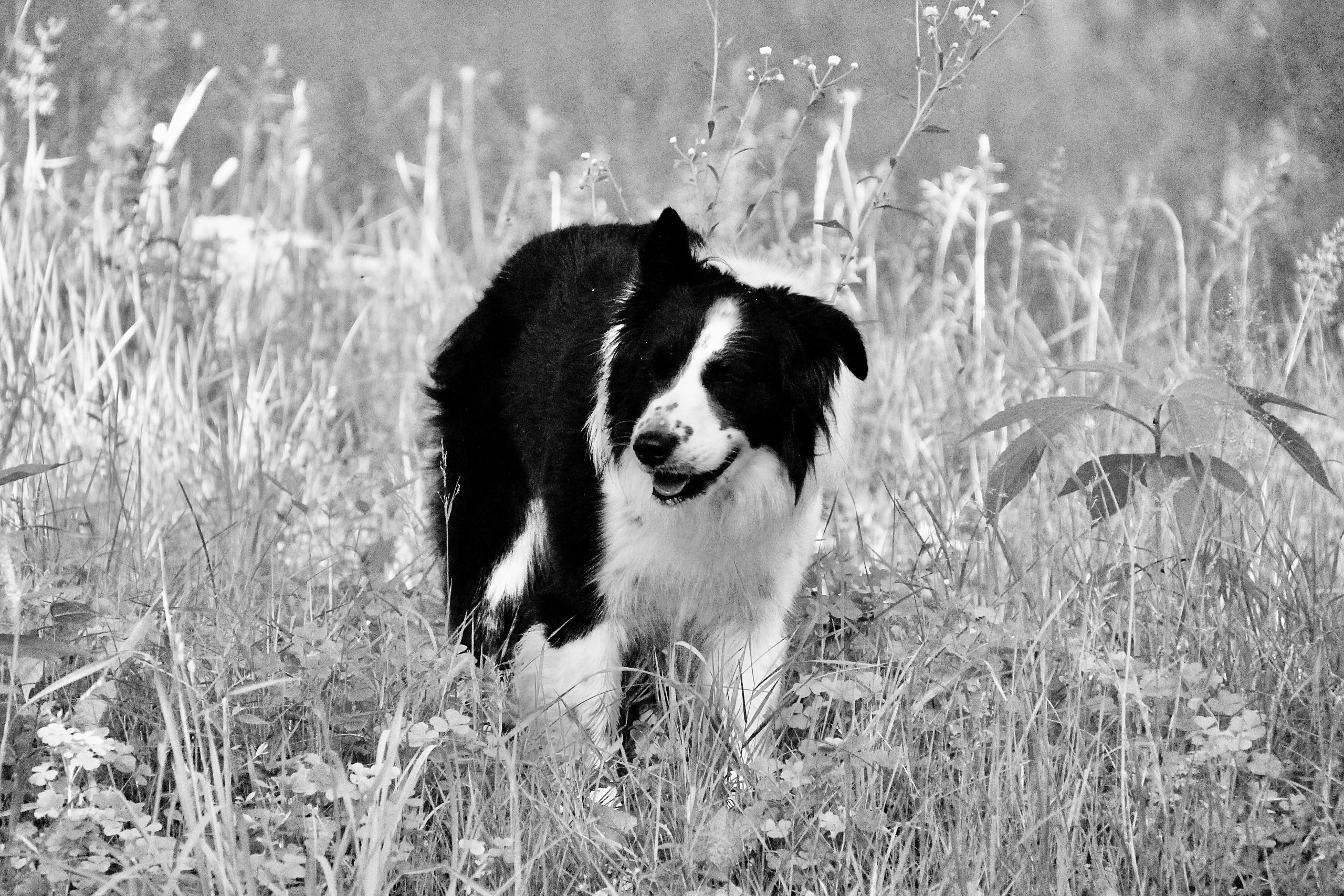 I am waiting for Maggie to explain to me how this position is comfortable. She loves a pillow under her head, but this seems a bit extreme. 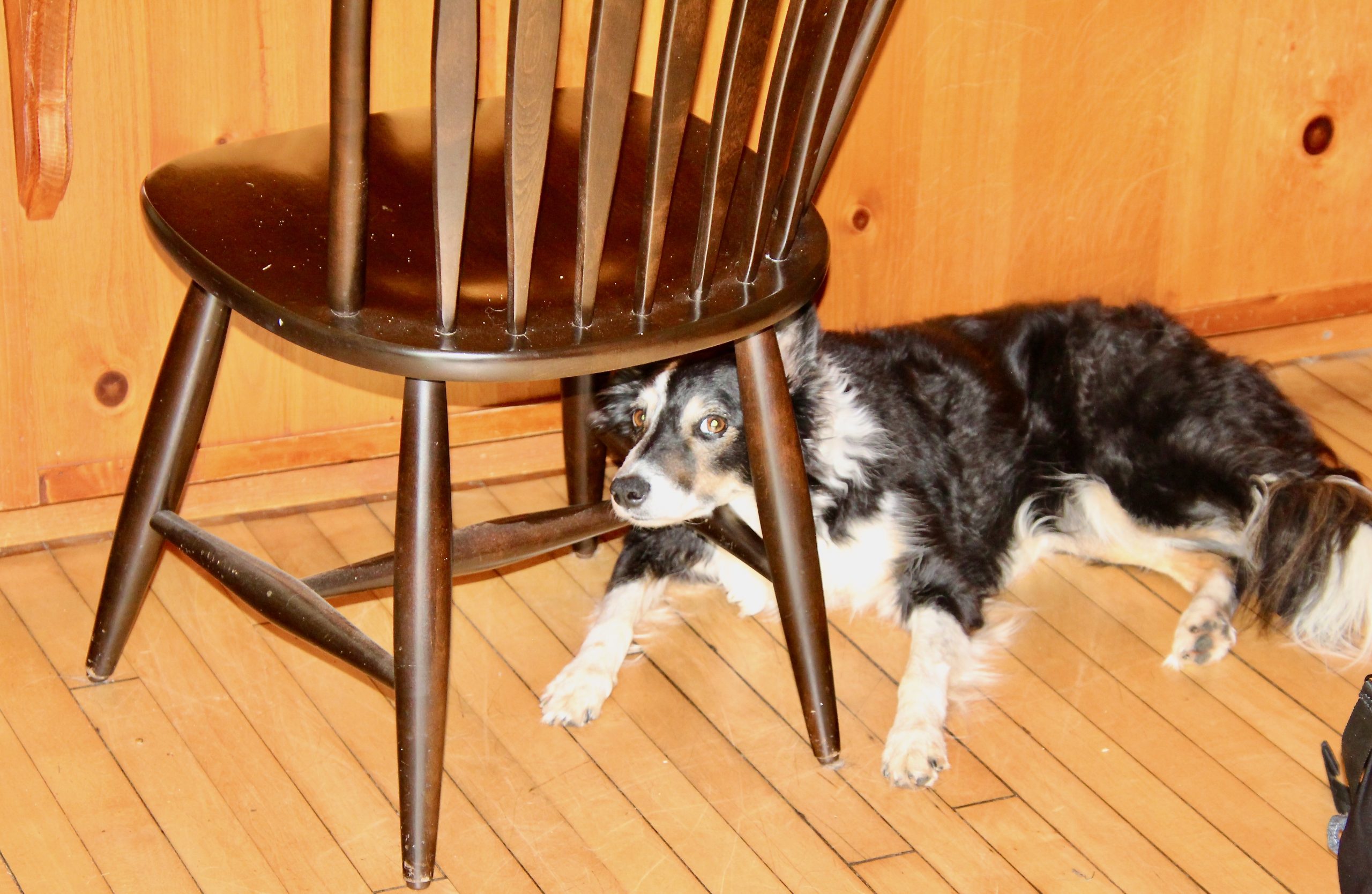 I hope you and yours are comfortable this week. Those of us who are not effected by extreme weather this summer are lucky indeed.