Welcome to an ongoing inquiry about the behavior of people and dogs.
Blog Home >> Animals >> The Food-All-Over-the-Floor “Method”

I mentioned earlier that Willie has re-injured his shoulder. He’s going in for a consult with my “sport medicine vet” on Wednesday, but meanwhile I am playing the not-always-so-fun game of keeping him quiet and not stressing his shoulder. Our two most challenging times are when he is waiting for his dinner and when he is greeting someone he loves. Otherwise it’s not too difficult. Leash walks outside? Trivial. Around the house? Harder, but very doable, (though not so good for my getting things done, but I sure have caught up on a lot of television lately!) I lie down on the living floor and rub Willie’s belly for several hours every evening (when we would normally be playing with toys in the house, after our walk or sheep work outside.) Otherwise he’s chomping on food out of a hollow toy or bored silly in his crate. Not fun, but not too difficult. But meal times and greetings are more of a challenge. Here’s one of the things we are doing now to keep him from straining his shoulder (and me from going bonkers).

At dinner time, Willie normally copes with his excited anticipation by grabbing a toy, shaking it with enough vigor to put life INTO something initially inanimate (I’m thinking Toy Story 4 here), and then tossing it up into the air before leaping up to catch it. I think of it as Willie’s “I can play fetch by myself” game, and it normally works well for both of  us. He plays in the living room while I fix his meal in the kitchen. But of course, now he needs to stay quiet and not stress his shoulder, so it’s either put him in the crate, where he is spending way too much time already, give him a stuffed toy (which he is getting lots of already) or take a handful of kibble and sling it across the kitchen floor. Ha ha! I call it Trisha’s little helper. .. who cares if the floor is clean after he licks up the food? It works perfectly: he spends 5 minutes finding and each eating piece, while I finish the rest of his dinner. His dinner is usually a mix of high quality kibble (normally not very much) and the rest canned and home cooked, but I’m happy to increase the percentage of kibble now when I need it.

This is also a great method for dogs when they are outside if you need to slow them down, get their attention, or take their attention off something else. I first learned to use it from Trish King, who uses it to distract problematic dogs who run up to you and bother your own dog, and have found it super useful in a variety of situations. Of course, it won’t work if the other stimulus is more powerful than the food, but you gotta love how long it takes a puppy to find small pieces of food scattered in the grass.

I’ve always been amused at trainers who label a relatively simplistic (and oft used) method as their own, but perhaps it’s time for me to join the bandwagon? Maybe we should call this the “McConnell Method?” Should get it trademarked? Throwing food on the floor?  Kidding aside, I’d love to hear if you’ve used this yourself, and if so, in what context. I suspect it might help quite a few of our readers who have their own challenges. By the way, I’m going to try this too when Willie is saying hello to me or Jim. He doesn’t jump up (Willie, not Jim), but is ecstatic and spins in tight circles, throws himself on the ground for belly rubs, and basically moves his body in every possible way except up to your face. Picture a four-month old Golden Retriever in a tuxedo. We bend down to him and he washes our faces, then he dashes off and gets a toy, which he tosses and shakes… you get the idea. I’m not sure it will be as successful in this context, I’m working on other alternatives now. I’ll keep you posted. FYI, his leg is indeed getting better (no visible limp when walking once he’s taken a few strides), but this is most likely an old injury that keeps coming back.  (Partial tear of biceptal or supraspinatus tendon?) If he does have surgery I’m going to have to find ways to keep him really, really quiet. But then, maybe we’ll decide surgery is not the best option? Paws crossed.

MEANWHILE, back on the farm: I need to get out to the barn and start cleaning it up, in preparation for lambing. The first lamb is due in 3 1/2 short weeks (first due date is actually March 25th, from Rosebud). This Saturday we are welcoming students from the Small Ruminant Club of the UW Vet School to learn how to do ultrasound pregnancy checks from Repro Specialist Dr. Harry Momont. The shearer will also be coming, so the ewes will first be sheared and hoof trimmed, and then be vaccinated to jump start the lamb’s immune system. We’ll move them to another pen where they’ll get a quick ultrasound. They are far enough along that we’ll probably know just by looking at them once they’re sheared if they are bred, but the ultrasound will be great practice for the vet students. Then we all retire to the farmhouse for chili and home made pie. I’ll be baking most of Friday night, but what could be more fun? I love meeting the vet students… so smart and inquisitive and dedicated to helping animals.

Here’s Mr. Will gobbling up kibble from the kitchen floor. Of course, I had to throw more out when I made his dinner (instead of taking a photo)… He thought that was just fine. 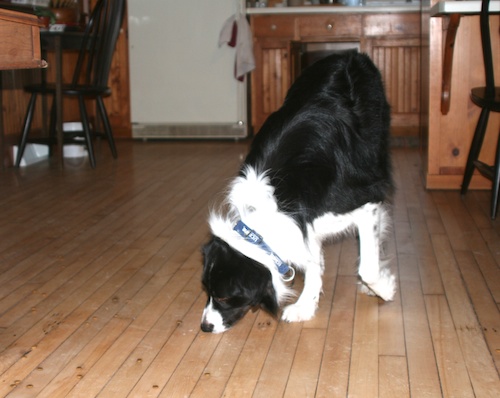 « Trisha Joins the 21st Century (and Facebook!)
Do Dogs “know” how long we’ve been gone? »