Welcome to an ongoing inquiry about the behavior of people and dogs.
Blog Home >> Animals >> The Illustrated African Wild Dog Story

As you know if you’ve been following the blog, 1/2 the folks who went to Kenya continued on to Botswana. We all knew that seeing Wild Dogs wasn’t a guarantee, but we had high hopes because we were going where and when our chances were highest. (And no, in response to one comment, there are no [African] Wild Dogs in the states, we’re talking another species here, see photos below.) We stayed at Chitabe Camp in the Okavango Delta, owned and run by Helene Heldring and David Hamman, and very close to the research station of Tico McNutt, who has been studied AWDs for over twenty years. We knew that he had radio collars on most of the packs in the area, and we knew that it was still denning season, meaning that the adults tended to stay put more than usual. Still, as an experienced naturalist told us “Seeing AWDs is a gift you can never count on.”

Finding the dogs turned out to be the adventure of a life time. First off, 7 of us got split off from the rest, missed our plane and arrived 1 and a half days late. (Actually barely made it, bush plane couldn’t land in the dark and we and our luggage were literally thrown from one plane to the next in Maun with only minutes to spare.) The six of the group that made it on time (Barbara, Barb, Lisa, Jane, Debbie & Pam) spent 4 hours the first afternoon and 14 hours (really) the next day looking for the dogs. One of the pack was radio-collared, but you have to be within 2 km to get a signal, and the dogs had moved from their usual area because of floods earlier in the year. They finally found them late in the afternoon of the 2nd day, about two hours drive from our tent camp.

Re-united, we all (with a few exhausted exceptions) took off at 6:30 the next morning, driving back to the area where the dogs had been seen.  First we drove about an hour and half on what we would call a track and Botswanans call a road. A plane had been circling overhead looking as well, and the pilot found the dogs and radio’ed in coordinates. After approaching the area, we left the sandy rutted track and began driving ‘off road,’ which included driving not through a woods of Mopane trees, but over them. Imagine driving toward a 12 foot tall tree, with 3 or 4 three inch wide trunks, and simply driving into it and over it. Absurdly, the trees pop back up like cartoon figures, and the damage to the area is minimal. Still, the camp and researchers only go off road when they are doing research and have no choice.

Here’s Tico holding up the antenna, looking for a signal from the collared dog: 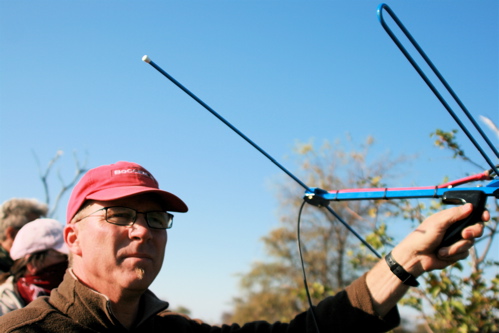 After about 45 minutes, Tico said “There!” And there they were. First we saw an adult, and then immediately came upon this scene: 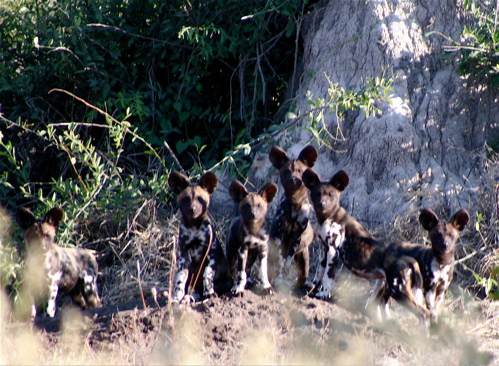 The photo is a bit fuzzy,  my apologies.  The light was a bit low, but mostly I was shaking with excitement. The 12-14 pups (we were never totally sure) were seeing a vehicle for the 2nd time only in their life, and they immediately took off after this photo was taken. Unfortunately, the pups had just developed to the point in which they no longer dashed down into the den when they were frightened. That meant that instead of staying still, the pups ran off and the adults had no choice but to run after them. We followed slowly through (and over) the thick, brushy woods, stopping often to avoid scaring the pups, Tico always holding up the antenna to keep our electronic connection with them.

Lucky for us and for Tico, who wanted to radio collar another member of the pack, the pack stopped after about 30-45 minutes, and we were able to stop close by and watch them while Tico prepared to place a radio collar on another individual. (He always tries to keep 2 members of the pack collared, since mortality is high and losing a radio collared pack member means losing the pack.)

We all sat breathless as Tico prepared the tranquilizer and dart gun, and groaned as a group when his first shot was lifted by a puff of wind and landed in the sand. He prepared another, seconds counting down, and this time the dart bounced off the hip of the female he was targeting. More groans all around. However, it might have been a blessing, because he had wanted to collar “Jones,” the breeding male and had decided against him because he didn’t look settled enough to get close to. (I think that was the most fun I had on the entire trip… realizing that I too had concluded that Jones wouldn’t stay still if we drove close: even though he was lying down, he had never turned his head toward us, although we were only 30 feet away. I loved being able to transfer reading a domestic dog to reading an African Wild Dog!)

After the second darting attempt, Jones looked more settled, so we slowly approached him (in our vehicle), Tico raised the dart gun one more time, we again held our breaths and this time the dart flew straight and true, into Jones’ thigh muscle (only safe target). Jones lept up, ran 10 feet away, and then circled around for a few minutes, lying down conveniently in the shade. Tico and driver BeBe then took measurements and collared Jones, and eventually we all were allowed to come down and see Jones close up, pet his stiff fur and look at his two horrendously infected teeth. Ouch.

Here’s Erin getting a once in a lifetime encounter with one of the world’s most endangered species: 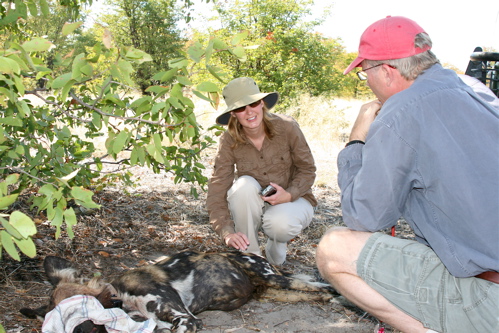 And here’s Tico giving Jones the andidote, after about 40 minutes of data collection and collaring:

We stayed with Jones until he was well up and recovering. I asked Tico if there were ever challenges to a dog’s social status if it returned to the pack a bit woozy, but he said he’d never seen a sign of it. He had worried about that very thing his first year of research, and actually removed the dog from the pack for a day to avoid a power shift. Eventually he found that to be unnecessary, and has not seen any problems in all the subsequent years he’s collared dogs.

This post is getting a bit, uh, lengthy, so I’ll postpone talking about comparative AWD/Wolf/Coyote/Dog behavior til later (if you’re interested… or is this getting boring?  let me know, truly!).

Last comments: Someone with the improbable name of Tico McNutt (I mean, really!) can be one of the most inspiring, dedicated, knowledgeable and kind people imaginable. He has three graduate students working with him now, and has spent over twenty years working with the highly endangered wild dogs. I don’t doubt that he is one of the reasons that dogs are holding their own in Botswana now. And Chitabe Camp is without question one of the most amazing places on earth. The tents are gorgeous inside (complete with blow ups of David’s astounding photographs over your comfy bed), baboons play on the roofs of the tents outside, the entire place is brilliantly run and profoundly eco-sensitive. I said this was my last trip to Africa, and it probably is, but if anything pulled me back it would be the AWD research and Chitabe Camp.

Here’s one more photo of the dogs (sorry, I just can’t resist):

Why Grandma, what big ears you have! 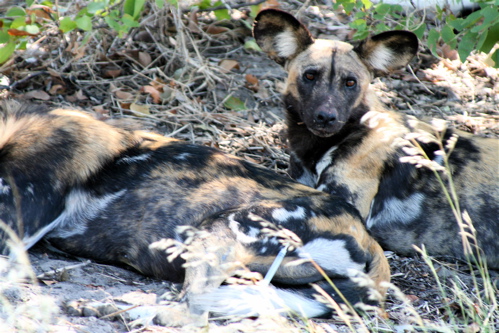 Meanwhile, back at the farm: No photos yet, but it is green and lush and cool and I feel like I’ve fallen into an emerald. Lassie and Willie and Sushi are wonderful, two of my ewes are struggling with a still unknown disease, the lambs are thriving and the grass is bountiful. Oh my it is good to be home!

« Gnus from Africa (sorry)
Be Glad Our Cats are Small »