Welcome to an ongoing inquiry about the behavior of people and dogs.
Blog Home >> Dog Behavior >> The Importance of an Emergency Stop; Fetching a Tree

A few nights ago I took the dogs out for their last potty around 10 pm, and things didn’t go quite as planned. Instead of walking sleepily out of the house to his favorite place to pee, Will took one step into the fresh air and hurtled like a bullet into the dark behind the house. In a second, no more, I heard a cacophony of snarls, screams and growls. I knew instantly what it was: the local raccoon was raiding the bird feeder behind the house. I was sure this was the problem, since the big garbage can full of grain for the sheep had been raided for a few nights in a row until Jim got creative with bungi cords. The only critter big and strong enough to pry off a metal garbage can lid is a raccoon, and every year one trades wits with us over who gets to eat the grain, so I was sure that’s who Willie was tangling with–in the pitch dark, up the hill a good 50 yards away by now, with me in my slippers and bathrobe.

“WILL!!!” I yelled, “THAT’LL DO.”  Growls, hisses, snarls and screams streamed down the hill through the dark… but no sounds of Will running back down the hill to me. “WILL!!!” I screamed again, beginning to have panicked thoughts of Willie’s face looking like hamburger after losing the battle to the raccoon (not an uncommon result of a fight between a dog and a rac I’m afraid). ‘”THAT’LL DO!!!”

Well, it didn’t do at all, at least not for the next ten-fifteen seconds or so. Will did come back after about 15 seconds, it’s true, and all injuries and further dramas were avoided, BUT he would’ve come back instantly if I hadn’t messed up and taken my own advice. How many  times have I said that it’s far more successful to first stop a dog when he’s tearing away from you than it is to ask, first thing, for him to come when called?  After all, when a dog is running full tilt away, he has to stop first before he can turn around and change direction, right?

Sure enough, I got my head on straight (and my dog back instantly) the next time it happened (last night). It is SO helpful to be mentally prepared, isn’t it? Will again tore out of the garage so fast he was 25 feet away, and a few feet from the raccoon before I could open my mouth. But this time, what came out of my mouth was the right cue. I said, simply, “NO.”  (Sometimes I say Whoa, I’m not sure Will can tell the difference!). It worked not because I said it in a loud, deep voice, but because I’ve taught Will to stop when I say “no”. It’s just one of his cues, one of the things I’ve taught him to do using positive reinforcement. It’s the easiest thing in the world to start: just say no, or whoa, or whoops, or whatever you want to say in a conversational voice. If your dog turns his head (which inherently means he has stopped doing what he was doing) or stops moving forward, shower him with praise (I ‘load’ “good boy” with tons of treats the first two weeks I’ve working with a dog) and reinforcement. Gradually work your way up to asking him to stop when he’s more and more distracted, always making the reward worth the effort. (I once gave Will an entire bait bag full of food for stopping instantly after flushing a deer). This is a very short description of how to teach your dog to stop doing something while still being positive and humane… you can read a more thorough one in Family Friendly Dog Training. (I also teach an “Emergency Lie Down…” but I didn’t want Will to lie down in the dark when I didn’t know where the raccoon was.)

Here are some thoughts to ponder: 1) I don’t think it’s inherently obvious to use Stop or Whoa or No to stop a dog when he or she is dashing away from us. I think we naturally tend to call them back, and in my experience, a recall isn’t as effective as a stop signal.  2) I’m curious how many readers have an “Emergency Stop” on their dogs. I couldn’t live without one, living in the country beside a county highway, but I’m interested in your experience. Do you also find it far more effective to stop a dog running away with a Stop or Lie Down than a recall? Do you buy my logic as to why it should be more effective?

On another note completely, here’s a laugh for you. (At least, it certainly was for me.) The following was part of a standard media release I was asked to sign:

For the purposes of clarity, I expressly waive any and all moral rights I may have in connection with my appearance/services.

Couldn’t be more clear, hey? Has anyone asked you to waive your ‘moral rights’ lately? (I crossed it out!)

Meanwhile, back at the farm: First, the FIRST flower at Redstart Farm! If you don’t live in the north, it’s hard to describe how color starved one gets in by the end of winter. The first flower brings more happiness than I can say. 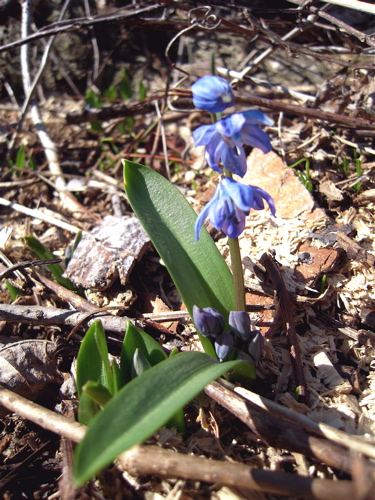 And here’s Will trying to play fetch with a large, long branch from a tree (it’s much bigger than it looks, at least 15 feet long). First he tries to pick it up… 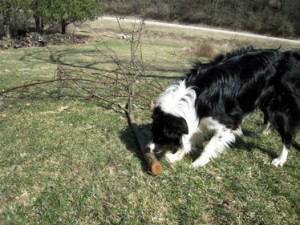 Next, he got it in his mouth but dropped it and play bowed … 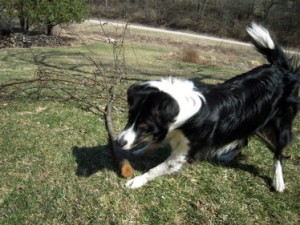 Then he stopped and looked at me to solve the problem (a notable difference by the way between domestic dogs and wolves: dogs give up quickly and look to their owners to solve the problem, wolves keep trying by themselves, even if they are comfortable and familiar with the people standing beside them. Just more evidence that dogs are super smart!) 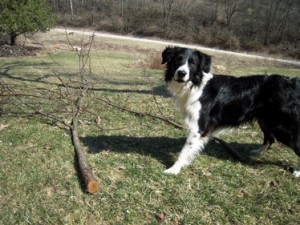 Here’s to nothing but flowers and fetch games for you over the weekend.  For us, Sunday is the first day of lambing… the cycle lasts 17 days, so who knows when they’ll come, but I always get excited about the propects! Wish us luck.. all healthy twins and contented momma’s.