Welcome to an ongoing inquiry about the behavior of people and dogs.
Blog Home >> Animals and the People Who Love Them >> The Puppy Chronicles: Chapter 3 — Puppy Tests Revisited

I’m about to take a week’s vacation and wallow in puppy breath, flowers, and friends. Jim’s surgery next week isn’t quite what we planned, but at least we didn’t have anything else scheduled besides enjoying spring and being together. I’m going to take a blog/email break and concentrate on my Jim, Will and Pup for the entire week, but I wanted to close out the chapter on the puppy tests, at least for now.

As you may know, I do the puppy tests, but am never sure how much to make of them. So far, I am impressed with their predictive value (but it is VERY early in the game, so this question needs to be revisited in 12, 24 and 36 months). The standard tests that I did ask how a pup relates to an unfamiliar person and the environment. Mick was only 1 of 2 pups who followed me, unafraid of loud noise and happy to leave the litter to follow an unfamiliar person. “New pup” ran back to the litter, clearly frightened. Mick brought the paper back immediately, New pup followed it, didn’t bring it back the first time but did the second. Mick startled and investigated when I threw something, seemingly quite bold, while New pup seemed so soft and easily frightened that I didn’t do the test. (I didn’t skip it as one reader asked because of his looks, in spite of my rude comments about his face!, I didn’t do it on the soft female either.) Overall, the tests suggested that Mick was super affiliative with people and relatively bold overall. Great dog to train as a performance dog. New pup tested as being a tad soft, sound sensitive and a bit more independent.

The ‘standard’ tests don’t tell you anything about how a dog will react to other dogs, which is why I asked for an adult dog to be let out to greet the pups. I remember thinking I’d give anything to have Luke, Lassie or Pippy Tay with me, I would trust their reaction totally. But Will’s reaction could have been based on so many things–being nervous around barking dogs, seeing puppies for the first time, so I left him home. You may recall that all the pups ran to the fence, but as soon as the adult began to race around, Mick ran as far away as he could, and looked extremely stressed. He eventually went and found a place to hide while the other pups were still trying to get to the adult dog. As I mentioned in my first post, it was a big red flag for me, and a big worry. I told Jim and the breeder that I was truly concerned about it, and thought for a long time, trying to figure out what it meant. Afraid of unfamiliar dogs? Afraid of lots of motion and commotion, nothing to do with other dogs? I decided that there was only one way to find out: take him home.

Both pups have been consistent so far, New pup more fearful of new things, more sound sensitive and a tad bit more independent. If I was choosing just for myself, Mick would be the better choice. But it took Mick a long time to warm up to Will, and his very grown up adult male dog behavior seemed like it might be a problem. New pup was all over Will immediately, thrilled to meet him and ear-flat submissive.

I promise you that there is simply no way to know who this little pup will be when he gets older. Some dogs who look super submissive seem to be alpha-wanna-be’s in disguise. I have always told people that if you can’t afford to take a risk, don’t get a puppy. Older dogs obtained from shelters, breeders or rescues are often less of a question mark, and although you may not know what you got until you get them home, you’ll know a lot sooner than waiting for 3 years for a pup to grow up! Speaking of pups . . .

Time for me to help my new pup grow up, give the poor thing a name, and spend a week with my boys. Your comments will be posted regularly, and I probably won’t be able to resist checking in, but no promises of comments back until I return.

Meanwhile, back on the farm: the poppies are blooming: 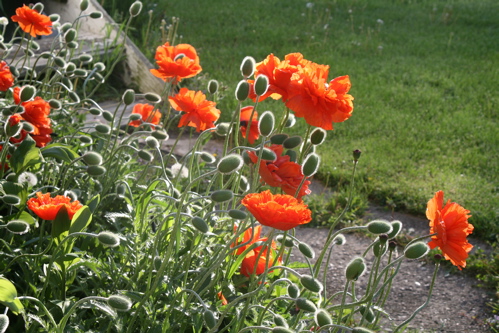 And Pup’s ears are standing up like blossoms reaching for the sun. Comical and adorable all at the same time: 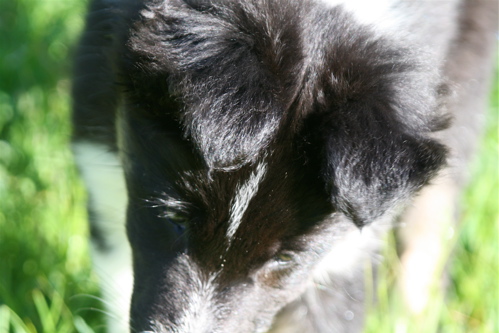 « What Training Can Do, and What It Can’t
Tail Wags Translated »