Welcome to an ongoing inquiry about the behavior of people and dogs.
Blog Home >> Animals >> The Secret Life of Dogs

There is a great BBC special on dogs on YouTube, (sent to me by an alert reader, thank you!). I spend so much time in front of my computer that I rarely want to watch an hour long show on it . . but this time I sat down and didn’t move for 60 minutes. It’s called The Secret Life of Dogs, and it’s great. Hands (and paws) down, great.

It has sections on Miklosi’s work on dog barks (people are very good at discriminating between barks given in 6 different contexts), Juliane Kaminksi’s work on the ability of dogs to follow a pointing gesture (which chimps and wolves do not seem able to do), Belyaev’s & Trut’s work on selection for docility in foxes (resulting in a profound number of physical as well as behavioral changes which basically result in domesticated foxes in 20 generations), and Kringelback’s work that asks if our brains respond to images of dogs as they do to images of babies. And more. No kidding. It’s extremely well done, and avoids a lot of the superficial generalities we so often hear about us and dogs.

What I find most interesting is the question, stimulated by the research on pointing,  about whether dogs and humans have a special sense of social cooperation. I don’t mean cooperation in the sense of mobbing predators or defending young or gathering food as a group, but in the sense of understanding that another individual needs help, and either offering to provide it, or being an individual who needs help and expects that one might get it from others.

This concept, the idea of helping others in a bit of a jam, seems to be one of the distinctions between the way our brain and the brains of other primates work. For example, in the PBS television special, The Human Spark, researchers have someone move toward a closed cabinet with a heavy pile of books. The person needs to open the cabinet, but requires both hands to hold onto the books. Very young children will try to help, but adult primates, perfectly capable of opening the cabinet, seem to pay no attention to the problem that another individual needs solved. Nor do they seem to look to others to help them solve problems (like dogs look toward us when they can’t get food out from under something, which wolves never do).

It is speculated in The Secret Life of Dogs that perhaps domestic dogs have a sense of helping others that fits more with human behavior (or society) than other species.  That might explain the results of the pointing experiment, in which dogs behave as though they have some comprehension that someone is trying to help them find the food. Of course, we have no idea what’s going through their brain, and in many ways they are far less cognitively complex than any of the apes.. but still, it is interesting to think about.

I’d love to hear what you think about the show if you get a chance to watch it. What got your attention the most, or what questions were generated from the show?

One more show you might want to watch: HBO has a special movie this Saturday night on Temple Grandin , the autistic animal scientist who has done so much to improve animal welfare and the lives of autistic children . The movie is getting great reviews, including by Temple herself, so if you get HBO, you might want to go out of your way to watch it. I know Temple; she’s a pretty amazing person, and I can’t wait to watch the movie. I don’t get HBO, I”m too cheap to pay extra for it, but friends will record it for me. Let me know what you think.

Meanwhile back on the farm: Willie is doing better every day. The snow is shallow enough that we can work the sheep again, and that is good therapy for both of us. Also, I recently realized, to my chagrin, that my sheep are downright fat. That’s not healthy for them or their lambs, which are due in 2 months. So the ewes are on a diet and a “Biggest Loser” exercise program. It’s good for me and Willie, and for them too. I suspect that Willie and I are having more fun than the sheep, but then, I sympathize with them. No one would ever call me a gym rat.

Here’s Willie this morning, waiting for me to throw his toy . . . 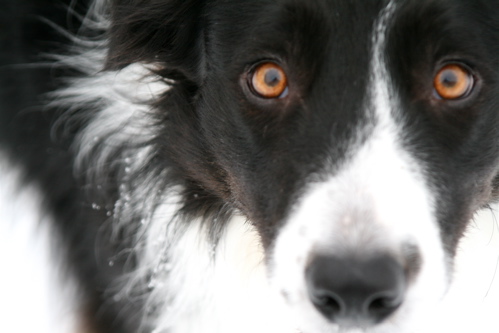 « Hugging
What Do Words Mean to Dogs? »