Welcome to an ongoing inquiry about the behavior of people and dogs.
Blog Home >> Animals >> Training Schedules

I’m reading a fascinating book, one that I recommend with five stars for anyone interested in the brain and behavior. It’s titled The Brain That Changes Itself, and is written, beautifully, by Norman Doidge, M.D. The book’s primary focus is on the plasticity of the brain, and how, in contrast to what was formerly believed, the brain is continually changing in response to the environment. He relates stories of stroke victims, for example, who are able to regain the use of limbs rendered nonfunctional because the motor area of the brain that controls them was destroyed. Previously it was believed that the brain can not regenerate and once an area is damaged there is very little that can be done to restore functionality.  However, that turns out to be a complete misunderstanding of how the brain actually works.

It appears that the pathways between the neurons of the brain are strongly affected by experience. Indeed, there is a kind of ‘competition’ within the brain, and as soon as one behavior becomes less common, another behavior begins to take over the neuronal connections. If for example, you stop using your right arm, the area of the brain devoted to moving your left arm becomes substantially larger. If you tape together two of your fingers, so that they can only move in concert, your brain loses the ability to move them separately.

What does this have to do with dog training? Well, besides being a brain geek, I was struck by the similarities between a new therapy for stroke victims and what we know about what’s effective in dog training. Think about this example from the therapy in which someone has lost the use of their right hand. In this new therapeutic paradigm, the patient is physically prevented from using their “good,” left hand. (Either it’s affixed to their body, or it’s covered in a mitt.) That prevents the brain from rewiring itself so that it only powers the left hand.  The patient is then immersed in a therapy that uses shaping (a ha!) to stimulate the brain to power the previously useless hand. First they are rewarded for any movement, (right hand moves an inch), then simple movements, then increasingly complex ones. After just three weeks, patients often regain a tremendous amount of function–even ones who haven’t been able to use a limb for years.

The therapy is believed to be successful at rewiring the brain because of three factors:

RELEVANCE–The training is most effective if it relates to everyday life (patients may practice circular movements by washing windows, for example),

SHAPING–patients are reinforced for each small advance toward a goal, breaking each movement down into tiny step-by-step increments. Sound familiar?!

IMMERSION–patients are immersed in therapy. Standard physical therapy was one hour a day, several times a week. In contrast, this therapy uses what they call “massed practice,” in which patients work for 3 to 6 hours a day. Think of how fast people learn a foreign language when they move to the country in which it is spoken, instead of practicing an hour a day…

The reference to shaping, of course, immediately got me thinking about dog training. Most of us are already using shaping (but isn’t it fun to understand a bit more about why it is so successful?), and I suspect that we often unconsciously create a ‘mini-immersion’ schedule of training. I don’t know about you, but I tend to practice a new trick, for example, relatively often, perhaps 2 to 3 times a day. Once we’ve made progress, my ‘schedule’ (a seemingly overblown description of the random occurrence of training trials) tends to lighten up. But, after having read this section of the book, I am going to increase the amount of early training that I do.

Cautionary note: We always need to be careful not to overdo things in dog training, especially by making each session too long. I’ve seen far too many dogs end up regressing because they’ve been asked to do the same thing over and over, even when they are doing it perfectly. This is often a disaster with super smart dogs, who appear to assume that they must be doing it wrong, and end up changing their responses.

However, why not 5 short sessions a day? Why not 7?  (Yeah, okay…. we all know a good answer to that! More on the reality of life in a minute…) I’m going to try something with Will for the next 2 weeks. I’ve spent so much of our time on working sheep, tricks and behavior around other dogs that I’ve never taught him a tight, classy heel. He’s had a sloppy, workable one for years, all that I really needed, but it just feels like time to polish it up. I’m going to try for 5 sessions a day for the next week.   I’m the first to say it’s going to be tough, even if they only last for 2-3 minutes. There’s all my work, the farm, yoga to keep my body semi-functioning, cooking healthy food, etc etc, but darn it, I’m going to try. I ‘ll keep you posted.

This relates to my next post, which I’ll write sometime later this week. One of you asked a great question: How much time do we spend with our dogs? Doing what? The underlying question here is, I think, one that many of us ask ourselves all the time: “Am I doing enough with my dog?” There’s no question that our enhanced relationship with our dogs brings up new questions, and, sigh, new ways of feeling guilty. I’ll address that soon, but meanwhile, I’d better finish so that I can get the rest of this morning’s work done and run home and start session #1 for the day…

Meanwhile, back on the farm: Will is still on exercise restriction, he MAY have had a minor injury to a ligament in his back leg (he does not have typical symptoms, and doesn’t limp at all, but he slipped on the ice a week ago and for a few days “hopped” on 3 legs for 1-2 strides after getting up.) Given his dodgy left shoulder, I’m not taking any chances. I told Jim this morning that a Willie with 2 bum legs would be, uh… I won’t even go there.  He’s going in for a chiropractic visit soon too, just to be extra careful. Meanwhile, Will, of course, is oblivious to all of this, and most probably has no idea why Tall Two Leg Female won’t throw a toy for him anymore. And no work on the sheep? Argh!

The inevitable March combination of mud and ice is with us, and would be intolerable if it wasn’t for the fact that it is a harbinger of color and light and life reborn. Right now it’s ugly as sin outside: gray and foggy, icy and muddy, bland and dull. You have to look for beauty a lot harder now, but it’s always there if you look hard enough. The sun came out right after I wrote that, so here is a quick shot of the flock in the orchard pasture up the hill behind the house. I suspect they are loving the appearance of grass, little as there may be, and lying in the sun in the balmy weather. (It’s over 40!) It’s not a great picture, but it does give you an idea of what it looks like this time of year. 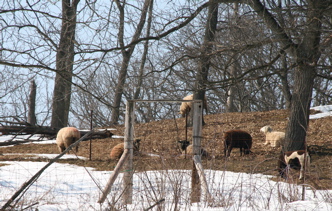 And right below that scene, the woods by the house are still deep in snow, being on the north side of a hill: 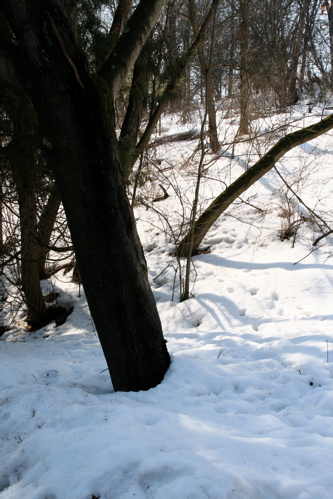