Welcome to an ongoing inquiry about the behavior of people and dogs.
Blog Home >> Animals >> Two New Books: The Kingdom of Gorillas, Dogs Can Sign Too

Two more interesting books: A favorite of mine, In the Kingdom of Gorillas has been revised and updated since it first came out a few  years ago. It was written, truth in lending here, by two good friends of mine. I pretty much kiss the hems of their pants, because they are the people who did as much as anyone (actually more in my opinion) to save Mountain Gorillas from extinction. Amy spent years living with gorilla families, and with her husband and co-author Bill Weber, spent years convincing the governments of several countries that a well-managed gorilla tourist program would be economically more valuable than cutting down the remaining forest and growing crops. They are brave, intrepid people who are a big part of the reason that I and my friends got to spend a rapturous 45 minutes sitting amongst an extended family of gorillas in Rwanda a few years ago. In the Kingdom of Gorillas is a fascinating account of their attempts to learn about gorillas, their life with gorillas, and their relationships with other researchers and agencies. (And yes, they knew Diane Fossey well. Some of their stories about her are in this book. Others, well, are better left unpublished.) If you want to read about Amy and Bill’s close encounters with these amazing animals, and marvel at the hard work and stamina it took to save the species, pick up the book.

The second book was sitting on a table by my desk until I got comments from my last blog about wishing dogs could communicate with us more than they do. Many people wrote in (when asked what they would like to know about canine cognition) saying they’d like to know more about how their dog could communicate with them more specifically and more effectively. Sometimes I yearn for the same thing, but one comment also reflected my worries about that ability: do we really want to hear what they have to say?  Would our dogs relentlessly sign CHICKEN CHICKEN CHICKEN I WANT MORE CHICKEN if we taught them how?

But here’s the book: Dogs Can Sign, Too by Sean Senechal. Here’s what it says on the back: “Imagine being able to ask your poodle, “Who’s at the door?” and having her respond “It’s Katy.” Or asking your golden retriever, “Do you want a treat?” and him responding, “No, water.” Myself, I’ve never met a GR who would pass up a treat for water, but hey, maybe it’d been in the desert and was seriously dehyrdrated… Anyone read the book yet? Taught your dog to sign? If so, let us know. I’ll pick it up soon and let you know what I think. Or, I’ll have Willie write it up.

Here’s the sunrise early this morning, a still, foggy breathless patch of time and space: 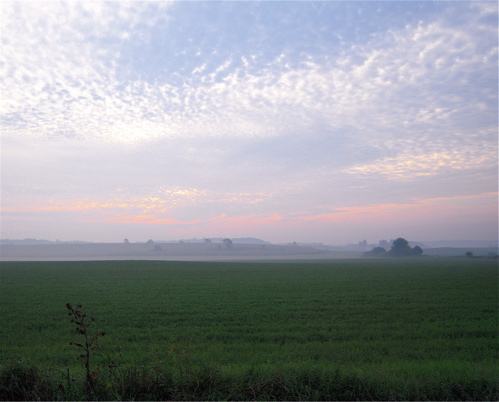 « Dogs and Dingoes, Who is Smarter?
One Step Forward, Several Steps Back »