Welcome to an ongoing inquiry about the behavior of people and dogs.
Blog Home >> Animals >> What Do Words Mean to Dogs?

One of the segments on the BBC show The Secret Life of Dogs that generated several interesting comments was the segment that showed “Betsy,” (not her real name, you gotta love that some dogs now have ‘nom de plumes’) retrieving an object after being shown just a photograph of it. Wow. That truly is amazing. It got me to thinking about the trouble I had a year or so ago when I tried to teach Willie to discriminate between toys based on a name. For over a year he’d been told to “Go get your toy,” and he’d pick out whatever toy he liked best that was nearby.

When I tried to teach him to touch or pick up a toy based on a different word (“ball” or “rope”), he became hopelessly confused. He became so stressed over the entire operation that I dropped it and went on to teach him other things. My best guess is that he had categorized all signals as requests for action, not as labels of an object. That’s a pretty big frame shift to make. And yet, here is Betsy, able to pick out 250 different objects by name and by just looking at a 2-dimensional photograph (which dogs, by the way, were not supposed to be able to do). And of course, there’s Rico, the other famous BC, who could not only pick out hundreds of objects, he could get the larger of two versions, AND could ‘fast map,’ or be asked to retrieve something he’d never heard of or seen before, and deduce that it was the only unfamiliar object in a group of familiar toys. Wow. These are some smart dogs.

Will now has learned labels of living things: he knows “Jim” and “Trisha” and “Sushi.” I can say “Go to the Barn” or “Go up the hill” and he runs the right way, but I suspect he doesn’t think of the “barn” or “hill” as a label of the object itself, but rather of an action and direction. The BBC segment got me rethinking about what Willie understands as an action and what he understands as a label. He knows “get your toy”… and I suspect understands that “toy” relates to the objects he plays with, but does he see it as a label or as an action? Is it more about playing with anything in front of him, or the objects themselves?

I’m inspired now to start testing this out with Will. I’m going to write down every word and movement I make that I think might be a cue to him, and what I think it means to him. This, needless to say, is going to take some time, so stay tuned for what I come up with. Meanwhile, I’d love to hear from you. How much of what your dog understands relates to an action, and how much is it a label of an object? Is there any difference between learning to label a living thing versus an non-living object? Willie definitely knows “sheep” and “Sushi,” and I wonder if it matters that the ‘object’ of a label is living or not? He knew all the names of my other dogs, in that he’d turn and look at them if I said “Where’s Lassie?” He gets excited when I say “Dinner,” but does it mean the actual food itself, or the action of eating them? See how interesting this can get?

Meanwhile, back at the farm: We are all continuing to heal. Willie played for hours with his new friend, Max, an adolescent Border Collie who lives not far away. Watching them run and run and run huge circles around the Orchard Pasture cheered me up immensely. The best part of it was the way they played, because Willie didn’t always play as well with others. Willie would start running with another dog, then get in front and air snap toward their face to stop their forward movement. Then he’d stand still with a satisfied look on his face. Look what I accomplished! Boy, am I a good herding dog! Eventually the other dog would just stop running, because what was the point? However, recently the lovely Dobberman Mishka seemed to have taught Willie to stop playing by herding. Mishka put up with his “herding” two times, and then growl-charged at Willie. Totally appropriate, very controlled; I remember saying “Good girl!” I was so impressed. Willie backed off with that confused, silly look that male dogs get around females who discipline them, and never tried it again. They began racing instead and now it’s Willie’s favorite game.

It helps that Max is fast. Really fast, and so is Willie, but neither can really beat the other, so they run and run and run in the snow, stop and get their breath and then run some more. And you’d think that would have tired Willie out enough to sleep through the evening? Of course not, he kept dropping toys in our lap all evening long. I think it just warmed him up. Here’s some photos of Max and Willie playing. Not the best photographs, but I love how it shows the world we live in right now. Black and white (dogs). Black and white (everything else!) 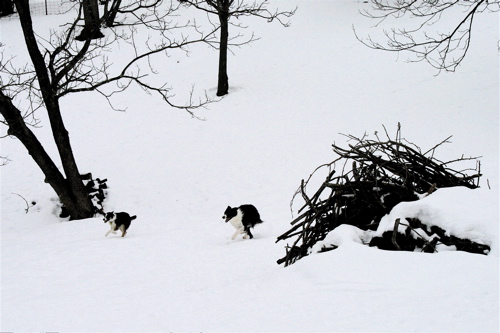 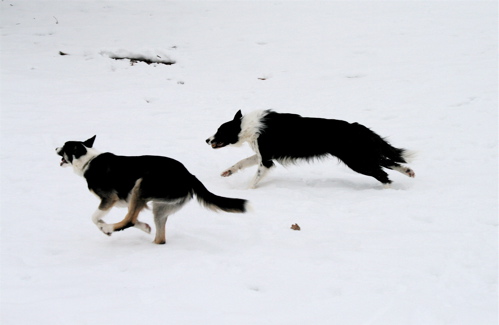 « The Secret Life of Dogs
What the Dog Knew Part I »