Welcome to an ongoing inquiry about the behavior of people and dogs.
Blog Home >> Animals >> What the Dog Knew Part I

Here’s one small aspect related to the question of how dogs interpret our cues:

I started listing the cues that Will responds to, asking myself if he saw them as verbs or nouns (good point by one of the readers that humans can use one word for both, as in “snow.”) I didn’t get very far before things got interesting. Remember that game that Ian Dunbar used to do in working seminars? Testing out what cues really mean to your dog?

It came to mind when I started working with Will, and I asked him to Sit when he was already sitting. He immediately lay down. Of course, you can teach through this, but I never have because I haven’t needed to. So right there…. Will and I have not defined sit the same way. I think Will defines it as an action similar to:  “Go down toward the ground,” while I’ve defined it as a posture. Right there we have a big difference in perceptions.

Lie down: When I asked him to Lie Down while already doing so, he flipped his hips and began to lay down on his side. Again, it looks like he defines it as an action (“go down farther toward the ground!”), while I tend to think of it as a posture.

Here’s another one to think about: What does “Stay” mean to your dog? My speculation is that dogs are extremely sensitive to ‘place,’ and that stay does not mean “don’t move your body,” it means “remain in the exact point in space.” I’ve come to define it that way too. If I tell my dog to Sit and Stay and he lays down, I’m perfectly happy because his behavior suggests that he has accepted that he’s not going anywhere and is choosing to get comfortable. Of course, if I competed in obedience that would be a problem, but I don’t so it doesn’t bother me. (Although I have to admit that I wish dogs weren’t asked to do long Sit/Stays.. it’s just not a comfortable or natural position for many dogs.)

Right now Will and I are working on using one hand signal for “High Five” and another for “Touch” (with your nose). He is struggling, because he anticipates so much… the second I move my hand he throws out a paw for a High Five, even if it’s his “Touch” signal. I can’t use separate hands because I’ve taught him to High Five with both fore legs, depending on which hand I hold up. Like so many highly visual dogs, he is so reactive to movement that sometimes it makes things harder rather than easier. I’m putting both High Five and Touch on verbal cues and we’ll see if that makes it easier for him. (I’m also going to tape my visual signals and see if something I am doing is making it harder. Moving my hand to the right 1/4 of an inch each time without knowing it? Could be…..)

Meanwhile, back on the farm: another 6 inches of snow or so. Nothing note worthy compared to some of the country, but pretty enough and thick enough to wear out me, Will and the sheep when we did some herding up the hill. Boy that warm bath is going to feel good!

Here’s Dorothy, impatiently waiting for me to put the &*^%$* camera away and get out her hay. 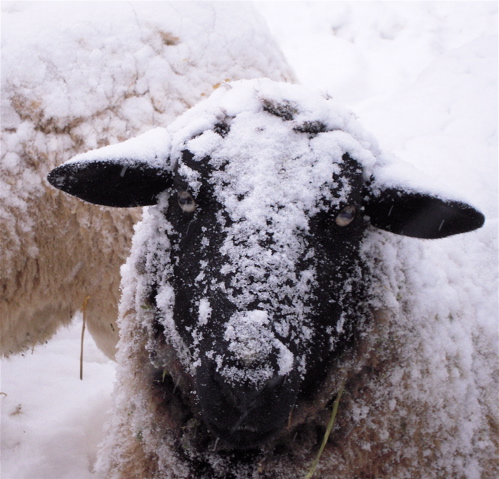 And because I am starved for color, here’s a Little Blue Heron from my trip to Florida in January. (This is one chilly bird, by the way, it was cold and rainy and the bird has one foot up to warm it and his/her feathers fluffed to capture air for more warmth. Seemed appropriate for this snowy day in Wisconsin!) 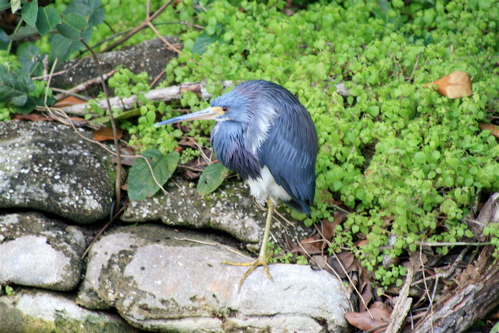 « What Do Words Mean to Dogs?
Interesting Play Styles »