Welcome to an ongoing inquiry about the behavior of people and dogs.
Blog Home >> Animals and the People Who Love Them >> Why Aren’t Dogs Bothered More By Masks? 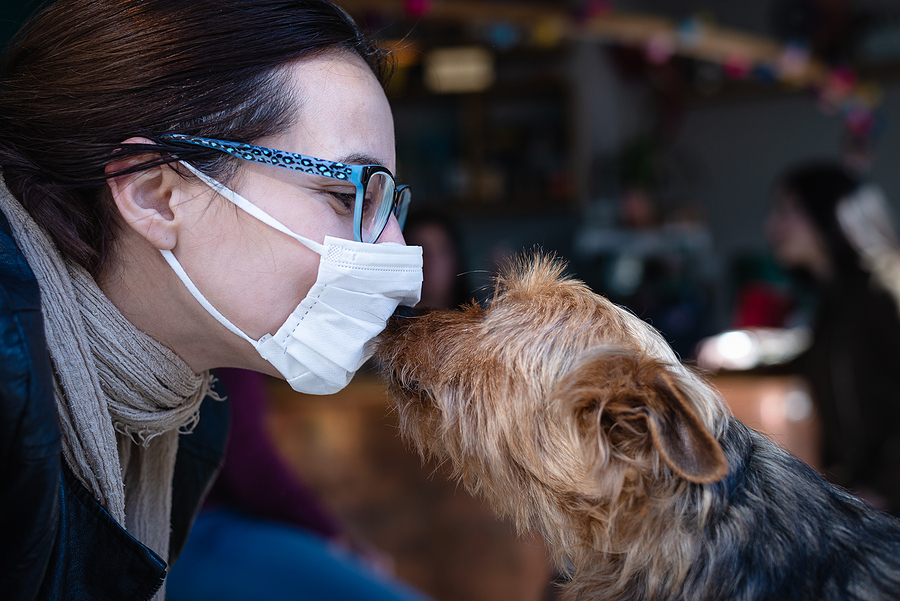 Friend and colleague Chelse Wagner of Dog’s Best Friend and I were talking a few days ago about what life is like in the dog training world, and Chelse commented about her surprise that so few dogs were bothered by people wearing masks. She works with a lot of reactive dogs, and not only were few dogs bothered by half of her face being covered up, some dogs seemed to be more comfortable if she had a mask on. More comfortable? Now, that’s interesting.

Remember when masks became prevalent and articles appeared with concerns that dogs would freak out when confronted by mask wearers? In June, Gene Weingarten wrote in the Washington Post that several dogs had reacted fearfully to his mask, including one who “nearly took my hand off.” Curious about the issue, I asked my Facebook readers on June 11th how their dogs had reacted to people with masks. The vast majority said their dogs paid no attention. That has been my experience too. That doesn’t mean that there are no dogs who react to masks, just that their numbers seem to be small compared to the number of dogs who don’t.

Theoretically, there are many reasons to believe that covering up our mouths would be disconcerting to dogs who consider humans their pack mates. We know that changes in a dog’s lips, from “offensive pucker” to “appeasement grins” are important indicators of a dog’s internal state and potential behavior.

There is some indication that dogs do indeed pay attention to whether someone is smiling or not. Certainly we suffer when we can’t see the mouths of others while we are wearing masks. I find not being able to smile at people, or more accurately, not to have my smile perceived, to be disconcerting at best. There is some research that suggests dogs do indeed pay attention to our mouths. Miho Nagasawa et. al. of Azuba University found that 5 of 9 dogs could discriminate between photos of their owner’s smiling and blank faces, which generalized to photos they had never seen before of unfamiliar people. However, that was true only if the gender of the person was the same as their owner and doesn’t tell us how important the lower half of the face was, since authentic smiles affect the eyes too.

Researchers at the University of Veterinary Medicine in Vienna, Austria, led by Corsin Müller, did look at dog’s reactions to just the lower part of the face. They taught 11 dogs to discriminate between a happy or an angry face, sometimes showing just the top half of the face, sometimes the bottom. The dogs were able to discriminate happy versus angry, whether they saw just the top half or the lower half. Of course, there are many cues the dogs could be using, but certainly it seems reasonable that dogs, given their highly social nature, their focus on visual communication and their close relationship with us, are indeed paying attention to the part of our face covered up by a mask.

But what if–just spit balling here–they find that information confusing? I’ve always said that tail wags are a bit like human smiles: They are often the result of happiness, but not always. Smiles also vary tremendously. They can be cold and scary, especially the kind that aren’t authentic, as is usually seen by the lack of wrinkles around the eye, which are seen in truly authentic smiles or, a “Duchenne” smile. Human smiles are believed to be derived from submissive expressions or expressions of fear, and we pull the corners of the mouth back towards our ears as do frightened dogs. And what about all those teeth that we flash when we smile? How do dogs interpret that?

In addition, perhaps other visual signals are more salient to dogs. Chelse and I both believe that silhouettes are extremely important to a dog when being approached by a person. For example, I know legions of dogs who would be afraid of the person in the first photo, but not the second: 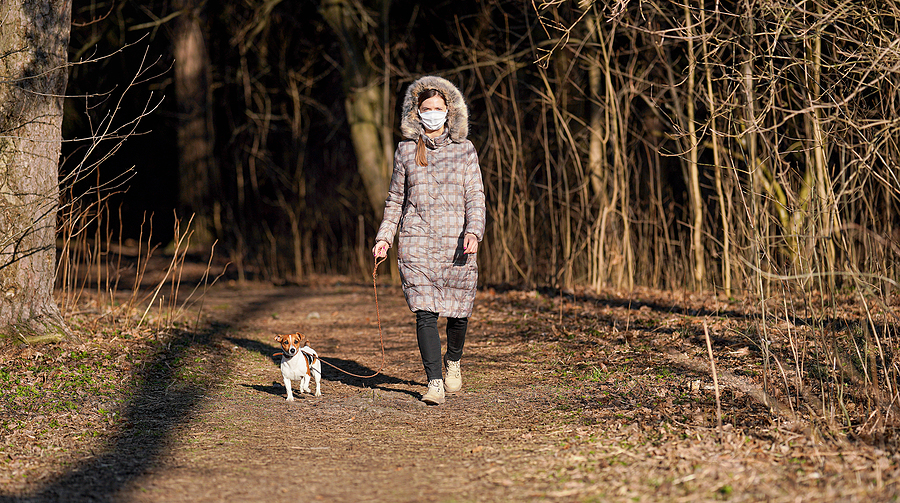 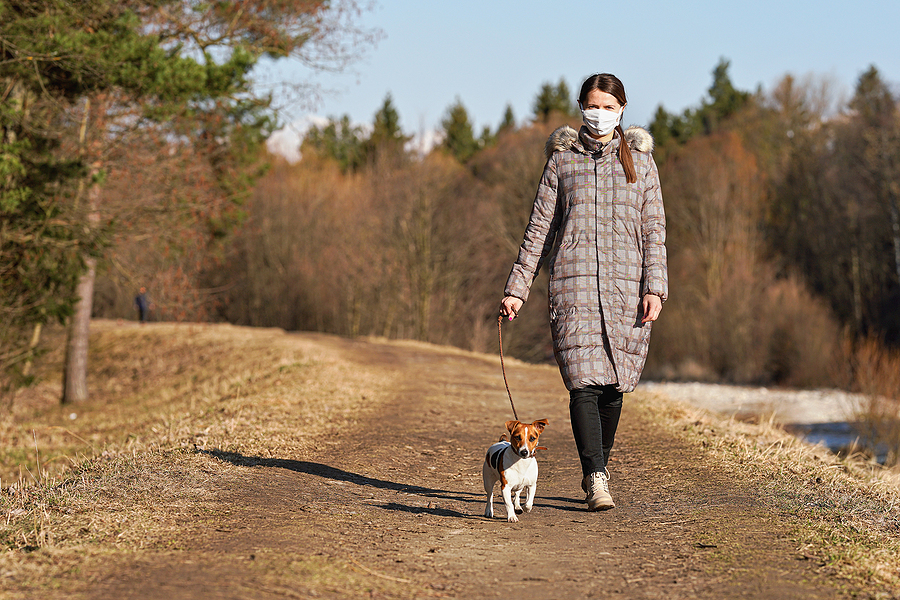 That hood! Guaranteed that would set off a lot of dogs. (Piloerected head fur? Or just strange?) All social mammals, us included, can’t take in everything all at once, and so we concentrate on the ones that are most salient. Is it possible that the expression of the bottom half of our mouths are not as salient as other cues?

Quick! Someone do research! I am flat out fascinated by this issue, especially the question of whether wearing a mask would make shy dogs more comfortable around unfamiliar people. Meanwhile, what about you? What has been your experience, with either your own dog, or dogs who see you with your mask on? I can’t wait to read what you have to say.

MEANWHILE, back on the farm: We had a heavenly break in Northern Michigan visiting friends who live on Lake Walloon. We were able to stay in an empty house right next door, so it all felt very safe. Not being able to hug good friends hurts my heart, but it was still wonderful to spend time with them. Here’s a highlight, thanks to friends D and J training the local Chickadees to feed out of their hand: 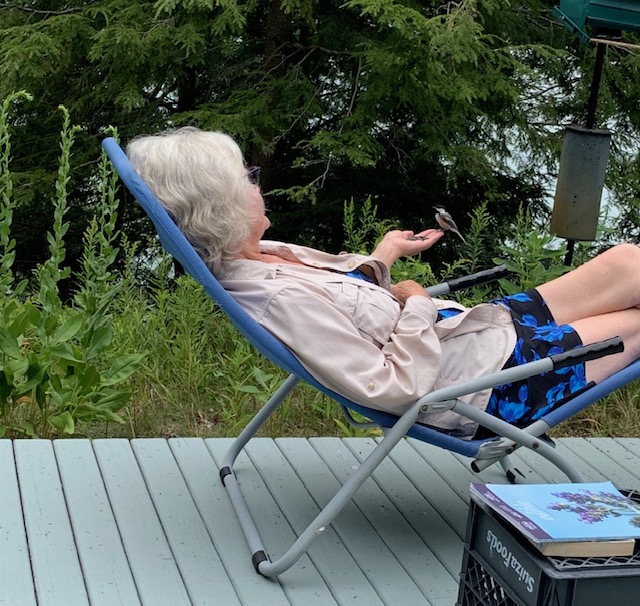 Here’s the Petosky jetty that Jim and I ran down to the end, dodging waves that swirled over the walkway. Just risky enough to be exhilarating, but not enough to be truly foolish. 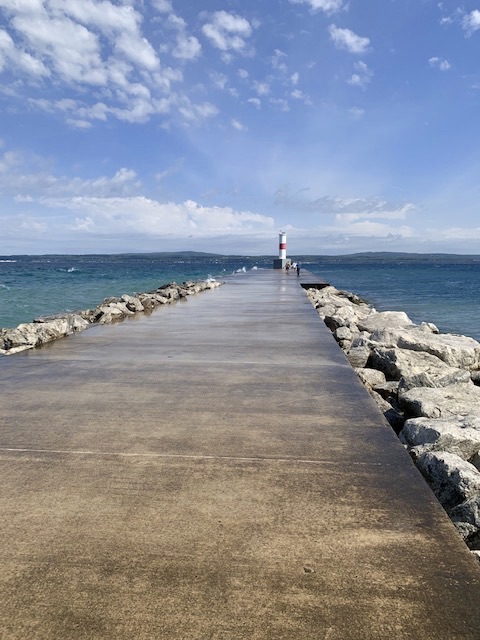 We took a beautiful hike along Bear Creek in Petosky, a wonderful wild area right in the middle of town. Followed by lunch in a park with food from Julienne Tomatoes, followed by my first ice cream cone of the summer. About time–it’s not summer if I haven’t had an ice cream cone for heaven’s sake. 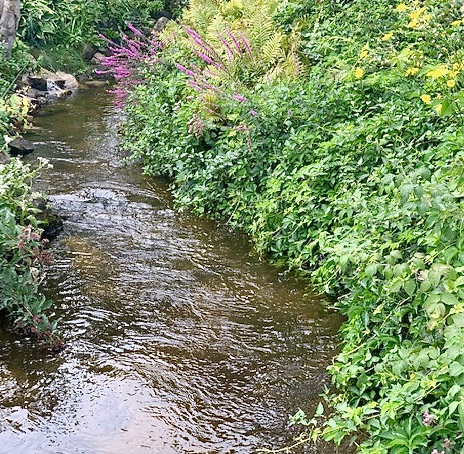 Back home again, Skip and Maggie treat us every evening to their mouth fencing games after dinner. (Turn off the audio, it’s just the TV, sorry.) I’m going to write more in a while about their play, because it’s complicated. We have been working through having two dogs who love to play, and who seem to love each other, but have very different play styles. I’ll write more soon about this issue, but for now, we are loving watching these two play in the living room.

Wish Maggie and I luck in the next upcoming sheepdog competition. It’s a huge, difficult course, so we’d both better put our big girl pants on. I’ll let you know how it goes next week. Have a good week yourselves, whatever size pants you are wearing.