Welcome to an ongoing inquiry about the behavior of people and dogs.
Blog Home >> Animals and the People Who Love Them >> Why Don’t Dogs Get Angry More Often? 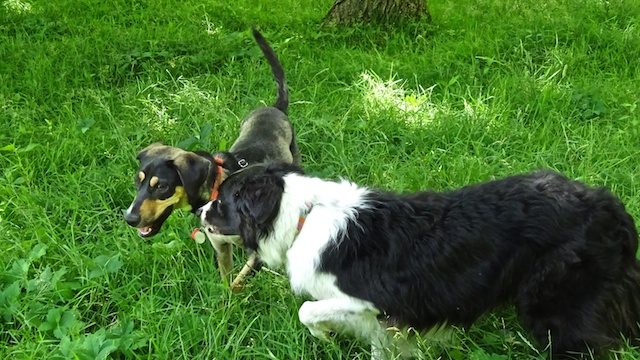 This is what I call Willie’s “snake face.” He does it when another dog does something he dislikes. You can’t see his eyes well here, but they were cold and hard.

I’ve had a lot of interesting conversations on book tour for The Education of Will, and one of the topics that comes up relates to dogs and anger. I’ve heard: “Are you really saying that dogs can experience anger? Isn’t that being anthropomorphic; surely anger is a human construct?” And from a few concerned people: “Aren’t you afraid that attributing anger to dogs just gives people an excuse to punish them?”

Good questions, and an understandable controversy.  I’ve learned that even putting the words “anger” and “dogs” into one sentence can be distressing to some people. So much so that I’ve written about it twice in the past, once in 2008 (Can Dogs Get Angry?)  and again in 2011 (Anger & Anger Management). To summarize those posts, in spite of our vision of dogs as having “all the virtues of men without his vices,” the neurobiology of mammals makes it clear that yes, all mammals are capable of experiencing some form of anger. It’s a primitive response to an environmental threat that energizes the brain and body to move from defense to offense.

However, there is no question that people often make mis-attributions about anger in animals. Just check out the endless number of “angry ram videos,” which illustrate how we confound an emotion (fear, anger) with an action (cowering, whimpering, growling or biting). These rams are behaving territorially. For all we know they are having a good time and are happy as clams. (Clams? Why are they the paragon of happiness?). Attributing any action to an emotion is problematic. That’s also true of dogs, and whenever I talk about anger in dogs (also see For the Love of a Dog: Understanding Emotion in You and Your Best Friend) I am quick to emphasize that most “aggressive” actions of dogs are motivated by fear, not anger. In my opinion–just speculating of course–dogs get angry far, far less than people do.

That leads to the question of today’s post. Karen B. London and I were talking about this issue a few days ago, and she asked what I think is a fascinating question. It’s a great one and it’s rarely asked. Not “can dogs get angry?,” or “why are we resistant to the idea that it’s possible?”, but why in heaven’s name don’t dogs get angry more often? Or do they, and we just can’t hear them swear?

I don’t think so. I think intense anger in dogs is rare. It’s there, but it’s rare. Why? I’m honestly not sure of the answer. Yes, we know that dogs are “neotonized,” in that they have been selectively bred to behave like juveniles in the adult, reproductive form. But that doesn’t explain it, because even very young humans are capable of going into full blown rages. Just ask any parent. And ask any primate researcher about anger in chimpanzees of any age, and they’ll argue that chimps wrote the book on letting the world know how pissed off they are. But not dogs. Yes, if you work long enough with dogs you’ll see a look of pure, unmitigated rage on some dogs face, but you can go years before you see it.

Keep in mind though, that like all emotions, anger comes in a variety of intensities.  In our own species we call a mild form of it irritation, while the other extreme we call rage. I’ve seen very few dogs go into a rage, but then, it’s not the version of anger that most of us are familiar with in our own emotional palette either. And there are cultural norms that color what emotion we are experiencing–women are discouraged from admitting anger, while men are often shamed for feeling sad or afraid. It seems the cultural norm is for dogs to be happy almost all the time, although sad is “okay” if they are missing us.

So I put this question to you: Why do dogs get angry so rarely? How would we know when they are angry if it’s not an extreme version of it? Of course, if you don’t agree that dogs can get angry, let us know. I suspect we’ll all have a good conversation about it, and no one will get angry at any one else’s comments. Just like dogs.

MEANWHILE, back on the farm: Lambs! And goat babies! Not ours actually; we had to forgo lambing because our flock was infected with a nasty bacterial disease. (Caseous lympadenitis if you are curious, but I’d argue that ignorance is bliss here.) That meant last fall we couldn’t bring over the ram we shared with our friend, Donna H. However, she kindly agreed to breed some ewes for us who we’ll buy and bring over once they’ve had their lambs. So we’ll have some lambs soon at the farm. Still, I got to go into baby rapture Sunday morning and enjoy Donna’s lambs and goat kids.

Here’s a collage of spring wonderfulness: Baby goat nose (goat kids basically look like small adult goats, except for size it’s hard to tell the difference), my cherry pie getting ready for its top crust, a day-old lamb, young male turkey displaying on our front lawn, and an adult goat. (Goats are so friendly and curious that photos of them all look like goat selfies.)

Maggie and I spend lots of time each day doing physical therapy exercises. Me for my tendonitis, Maggie for her bad knee. When you add in a 30-45 minute leash walk for Maggie, it adds up to about two hours a day. The good news is that we are both doing better. Here are some photos of Maggie’s exercises. I’ll spare you photos of me doing my own. You’re welcome.

The first photo is Maggie on the balance board. (Handily stored in the attic since Willie’s rehab from surgery.) I use my legs to move it left to right, and she has to engage lots of muscles to stay balanced. Note her tail–it’s hard work. We started at slow and predictable movements for 30 seconds, now she’s up to two sets of 75 seconds with the board moving more erratically. The other photos show her “step over” exercise. I lure her over with a treat; moving her forward ever so slowly. You can see her lifting her right hind, the leg we are working to strengthen. We also do “creep under” to poles at neck height, and take 30 to 45 minute leash walks. Seven more days until she gets to begin to move more freely–we even begin to work sheep a tiny bit again. Be still my heart, but I wish I could tell her!