Welcome to an ongoing inquiry about the behavior of people and dogs.
Blog Home >> Cats >> Willie Rocks, Lassie Gives Me a Scare

I took Will to a friend’s to work him on different sheep in a new environment. I’m getting to the point where he and I don’t have too much more we can do at home. My small flock is so tame that Will has to be within a few feet of them to move them, unless I split out a few and force them away from the main flock. Then they are flightier (and more challenging), and I’ll do that more and more, but don’t like to stress the ewes and lambs too much when the lambs are young. Either way, it’s still the same sheep in the same place, and Will needs to learn how to work lots of different types of sheep in different places. (So do I!) We are used to working in first gear, when most sheep work in done in 4th.

I wish I could show you a video of how he did. We were at a gorgeous farm where Will has never worked, and three things happened that made me so happy I could have carried him home myself, all thirty miles.

1) I sent him on a long outrun, two to three times as far as he’s ever gone (perhaps 250 yards? I’m guessing). He did a perfect outrun, and I don’t have the words for what it feels like to watch your dog get smaller and smaller as he runs away from you, curving out at just the right time to go around the flock and not disturb them until he gets to the back. As I think about it, I should  NOT qualify it as a “perfect” outrun, because no one was holding the sheep in place, and they were moving long before he got there and were close to the edge of the field. So, was his ‘lift’ perfect? (That’s when the dog gets around to ‘twelve o’clock’ and first makes contact with the sheep.) I can’t say, because the sheep were moving long before he got there (not because he was too close), he got them stopped once he got around them, he turned on balance and brought them straight to me. We’ve never worked on such a huge field and it makes my heart full to work in a place that open and free.

2) He’s got his flanking whistles down. Down pat. What’a boy, I’m so pleased. Here’s a synopsis of the process:

a) We work on his flank whistles for 2+ weeks, looks like he has them nailed.

b) Week three everything falls apart, I realize that once I thought he “had” them I tested him by asking him to change directions a lot. I begin to suspect he thought that both whistles meant “change direction.”

c) For 2 sessions, I go back to the first steps, having him run around and around, clockwise or counter clockwise as I repeat his whistle over and over, using the movement of the sheep and visual signals to keep Willie moving. I tested him a few times in a different context, and it seemed he wasn’t making any progress on which whistle meant what.

d) The next time we worked I send him on an outrun and he runs around to twelve o’clock and keeps going. And going and going. He runs an entire 360 degrees around the sheep, ignoring my signals to stop. It takes me a second outrun to realize he had interpreted Step C not as whistle training, but as training to run in mindless circles around the sheep.

e) After realizing this, I sat down and laugh out loud in the wet grass and asked Willie for a kiss. Willie obliged, then peed on a bush, then looked for sheep poop to eat.

f) I stop using his flank whistles for a few days (used verbal), then gradually added them in on occasion, no longer having ‘flank whistle training sessions,’ just using them when I know he wants to go that way anyway. Gradually I start asking for them when he’d prefer the other direction, and with very few corrections (a verbal no), Willie starts getting them right.

g) I take him to Peg’s (where Redford is) and he gets his flank whistles about 19/20 times.

h) Willie not only took his flank whistles every single time at our last outing, he listen beautifully, even at 200 yards. Bless him.

3) Willie came to me as a puppy pathologically afraid of other dogs but was great in the field with a guard Pyrenees (more on Willie and other dogs in other posts, and probably and eventually a book.) We’ve worked on it for three years, and he’s been improving leaps and bounds. My friend’s sheep were guarded by a working Great Pyrenees, described as a “big galoof” who loves all dogs, but still, I was thrilled that Will and he had two perfectly reasonable greeting encounters. At one point Will would have run away in terror, at another he would’ve attacked. This time Will briefly greeted him before going to work the sheep, and then left my side the instant I said “that’ll do” after working sheep and ran to sniff the other dog some more. I won’t say there wasn’t a bit of tension there, but nothing serious and easy to manage. Just being able to have Will around unfamiliar dogs is a joy, especially a big, guarding male.  More to come on that score, as I said, but back to herding for a moment:

Mind you, Wilie and I couldn’t score well in a trial now if our life depended on it. He behaves completely differently if anyone, anyone at all is watching (I know, I know, is it me, or is it Willie?) and he is easily intimidated by sheep. He’ll lose contact with them, take the pressure off when he shouldn’t, get rattled if there’s any stress and if he is confused, but lordy he’s trying incredibly hard and I love him to pieces. And me? Oh dear. I have no ability at the moment to work fast moving sheep… I simply can’t make decisions fast enough to get flighty sheep to stay on a perfect straight line on a drive, but then, I’m trying hard, too. Willie seems to forgive me for it, or at least, he can’t talk and tell me what he thinks…

Lassie terrifies Trisha: Yesterday morning I woke up mildly surprised. In five minutes I was in terror. It was 6:15, and Lassie always, always ALWAYS wakes me up between 5 am (sigh) and 5:45 because she has to go outside to pee. In general, I haven’t set an alarm since we stopped taping Calling All Pets over a year ago (when I had to get up at 4:30 on Wednesdays). But now, it’s 6:15 and Lassie is sound asleep. No worries, I pad over to her doggy bed and gently touch her shoulder. “Lassie,” I say quietly, because she often startles when awoken because her hearing is so bad. Nothing. Lassie is soft and warm, but immobile.  “Lassie” I say, and press with my hand a little harder, shaking her shoulder back and forth. Nothing, and no sign of her chest rising and falling either. This time I push forcefully into her, saying LASSIE now with real fear in my voice. I’m so loud and clearly scared that Jim peeks over the bed, worried himself. Nothing. Not a twitch.

It’s amazing the thoughts that run through your head when you’re in crisis. I remember, very clearly, thinking that “she must have died recently, because she’s still warm and there’s no rigor mortis” and “how sweet that she died in her sleep and presumably didn’t suffer.” These were cognitive thoughts, generated by my cortex, when my amygdala and hippocampus was screaming OH MY GOD LASSIE IS DEAD. I remember the thoughts and the emotions of terror and panic as being parallel, but completely separate from one another.

The panicked part of me shook Lassie one more time, this time shaking her hard and yelling her name with pure terror in my voice, and as I did she slowly raised her head and licked my face. I burst into tears and sobbed like a child, kissing her muzzle and saying her name over and over again. This morning she woke us up around 5:30, and at first I thought, “Oh Lassie, just a few more minutes!” and then…. was overwhelmed with gratitude that she’s there to wake us up at all.

Meanwhile, back at the farm, during the sweetest spring weekend you can imagine. Here is a picture of the yard that Jim took yesterday: 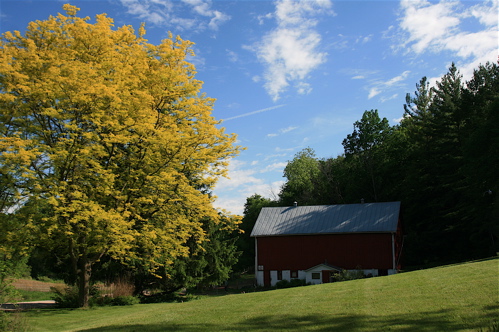 In this next picture, I love the different postures of Will and Sushi: Will is chewing on his Sunday bone, Sushi is practicing her “lion on the hunt” look. 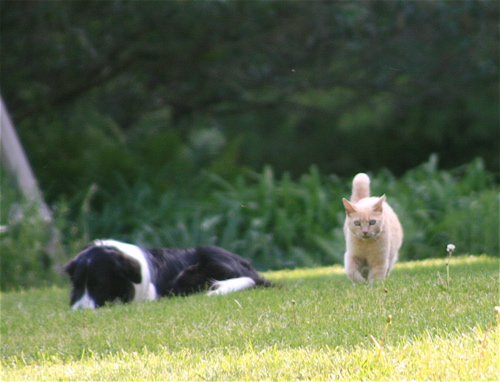 And here’s why Sushi is now stuck inside for the next few days: This baby robin flew/fell out of the nest on top of the porch light this morning, along with two others. There are also Chipping Sparrows in the bush by the living room window, wrens nesting in the exhaust vent from the bathroom (which no longer works, although for years when you turned on the bathroom fan you’d  hear cheep cheep cheep cheep… now it doesen’t work at all and I’ve just given it away to the wrens), a PeeWee nesting on top of a down spout by the porch and barn swallows nesting in the garage. [added note 6/10: an alert reader suggested it was not a PeeWee and she was absolutely correct! I watched carefully the next day and saw the typical tail flick of the Phoebee and heard their typical song. A PeeWee is nesting close by because I hear it often, but not on the house.} That’s four nests attached to the house…. and all with babies about to fledge. Sorry, Sushi! 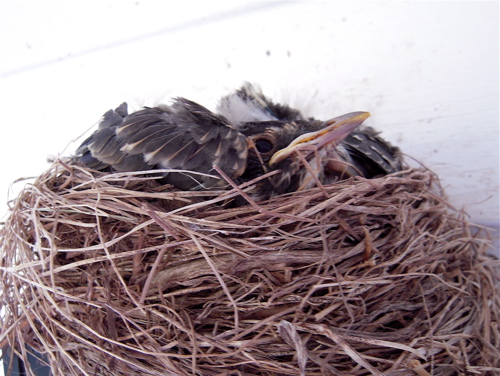