Welcome to an ongoing inquiry about the behavior of people and dogs.
Blog Home >> Animals >> Willie works on his courage

It’s been a busy weekend at Redstart Farm. The weather was cold, cold and windy, then rainy and windy, then just plain cold this morning at one below. But the snow melted enough so that it’s not too deep to work Will on sheep, so Friday, Saturday and Sunday Will and I got to work together. We hadn’t worked in quite awhile, the snow being far too deep for so long, and the month off appeared to have changed the relationship between Will and Redford, the ram. A few months ago the ram confronted Will and Will did exactly what he should have: when Redford walked straight up to Will and sniffed his face, Will lunged forward and air snapped, just enough to back Redford off and take charge.

However, on Friday afternoon, things were different. This time Redford put his head down and charged toward Will. (When sheep challenge others they actually tuck their heads down so far that their noses point under their legs toward their tail. That leaves nothing but the hard, bony plate on their forehead facing the dog, other sheep or unfortunate person. Take it from one who knows.. you don’t want to be struck by one of these, it’s like getting slammed into by a large hammer. There is a reason, after all, that they call it ‘ram power.’) I suspect that Redford has been here long enough now that he feels more confident than he did earlier. He’s bred all (or most) of the ewes, he’s been here now for almost 2 months and I think he’s starting to make his move as head mammal in the barn yard. As as fond as I am of Redford, and as important as it is to have my sheep handled kindly and gently, there are some rules here, and I’m afraid Redford is going to have to learn that he needs to ‘listen’ to Will (even if he doesn’t say ‘Ba Ram Ewe’ like Babe did in the movie!)

On Friday, instead of standing his ground, Will ran back a few yards, clearly intimidated. Compounding this was the fact that the place Will needed to stand to get the sheep where I wanted them was in deep, drifted snow . That put Will at an even bigger disadvantage. However, Will came right back in when I encouraged him, and we split off three young, healthy ewes to drive up the hill and work in the high pasture. The oldest ewe of the group, Brittany (yes, she got pregnant at an early age, whereas her cousin Paris never got bred at all) had clearly observed what happened between Will and Redford. She turned to face Will every 10 yards or so, but he held his ground and she never charged. It took us quite a while to get them up the hill though, with Brittany making an end run to the right or left every few yards. I’m sure that wouldn’t have happened if Will had held his ground when Redford charged. Sheep aren’t anywhere near as dumb as many think… they are excellent observers and have no trouble sensing any kind of weakness in a dog.

Saturday and Sunday I took the entire group up the hill (except for the 2 ewes in the nursery, see below) and Redford did a lot of challenging of Will, but the first time I encouraged Will to ‘get in’ and he did, charging toward Redford a few steps, but not touching him. After that Redford has been turning away after a 2 or 3 second stare down with Will. You can probably hear me say ‘GOOD DOG” from your place every time that happens. As a blatant coward myself, I can’t blame Will for being intimidated, and I’m so proud of him for hanging in there. I’m sure Redford is going to go after Will again, and have high hopes that they can get this settled soon and without much conflict… Will is absolutely brilliant on sheep in many ways (lovely, open flanks; exceedingly biddable; great natural balance) but he is without question almost too easy to handle. It’s great for me, having not trained a young herding dog in 12 years (!), but dogs who are as easy to handle as Will at young ages are often less powerful than the ‘perfect’ dog.

I’ll keep you posted on the Will and Redford saga; I’ll try to get some photos of the face offs, but it’s hard to get pictures and be there for Will when he needs me…

Meanwhile, here are some animals on Redstart Farm. The white lamb below is NOT supposed to be here. I’ll explain soon! 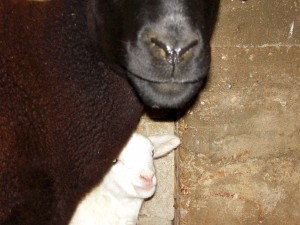 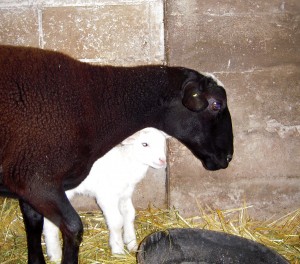 The two deer below are coming every day now mid-day to the back yard. Both these photos are taken out the kitchen window. As a biologist, I know that deer are over populated, and I willingly allow neighbors to hunt my land to help keep the numbers down. Ah, but these two? What a perfect example of the conflict between being a “holist” (as in Aldo Leopold’s argument that our duties aren’t to individual animals but to ecosystems) and an “individualist” (as in Regan or Singer’s arguments about animal rights.) Now that I am becoming familiar with these 2 deer, they are no longer members of a population, they are individuals… and I can’t help but hope no one shoots them… 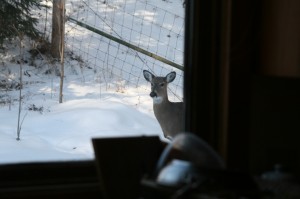 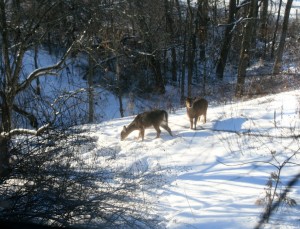 « Comparative and Canine Cognition; Don’t Sleep, There are Snakes
Willie versus Redford, Round Two; “Power” in Herding Dogs »