Welcome to an ongoing inquiry about the behavior of people and dogs.
Blog Home >> Canine Cognition >> Yup, Dogs Can Be Disgusted!

Well, it seems appropriate now to talk about disgust after a weekend of gluttony. (But what fun cooking paprika chicken and pot roast and roasted brussels sprouts and home made bread and pumpkin and cherry/raspberry/rhubarb pie. Not to mention eating all the turkey that others cooked and I ate up as if I was starving.)

It’s been interesting reading about whether dogs people believe that dogs can experience disgust. Recall that 66.2 % of seminar participants said yes, and 78.3% of blog readers who responded said yes (this may have changed as later responses came in, but not significantly). (The Morris research listed only 34% of people responding yes, but a blog reader commented wisely that the question wasn’t “Can your dog…” but “Have you observed your dog experiencing disgust.”)

But here’s the deal. Disgust is perhaps the most basic of all emotions. Disgust, or “an aversion to something offensive,” is seen in all mammals, most often in response to a smell or taste that is aversive for some reason. Our expressions of disgust are similar across species, as Darwin noted in The Expressions of the Emotions in Man and Animals. Here’s is a more current illustration of that from Youtube:

Disgust is registered primarily in the Anterior Insula of the brain, an area that is active both when one feels disgusted and when one views a disgusted expression on the face of another. Because of its close association with the sense of smell, disgust has been postulated to be the “first emotion,” designed to prevent the ingestion of dangerous substances. However, I was surprised to find very little about disgust in Panskepp’s classic book on emotions in animals, Affective Neuroscience. In spite of that, I know of no biologist who argues that other mammals don’t experience disgust on a basic level.

Of course, what is perceived as disgusting is both species specific (the stink of fox poop not being a human favorite) and culturally transmitted. Not surprisingly, this  is especially true of food: for example, some cultures find big, fat juicy insects and their larvae highly palatable and others, not so much. There’s an interesting article in Time Online about the research of Andrea Morales and Gavan Fitzsimons who found that just being next to something perceived as disgusting made an item less attractive (ie, don’t try to sell cookies next to Kitty Litter at the supermarket.)

That brings to mind a seminar I did in Canada in which the host hotel thought it would be a hoot to serve the chocolate pudding desert in the shape of dog feces. Seriously. It looked exactly like poop sitting on a white plate. They were actually surprised that no one ate it, but not as surprised as we were that they did it in the first place. We all laughed, and then looked at each other with somewhat stunned expressions on our faces, and pushed the plate away.

It also reminds me of John Rogerson’s technique of inhibiting dog-dog aggression by throwing a bag of dog feces into the face of the offending dog. I’ve never done it, but I’ll bet it would absolutely get a dog’s attention. Of course, some dogs eat feces, but I doubt they’d enjoy poop-in-the-face. Personally I’d rather not use it as a training technique (pretty negative for the person too), but I have thought it would be a great last ditch tool if you were walking down the street with a bag of poop in your hand and a dog charging at your reactive dog.

This all gets me thinking about the use of ‘disgust’ in behavior modification. You all know I’m a positive trainer, but that doesn’t mean that I wouldn’t suggest someone use something aversive to prevent some behavior problems if the solution is humane. I’m thinking about Bitter Apple for example: I just sprayed a plant with it to prevent Tootsie from chewing on the leaves.  But what about an aversive scent versus taste? Any use for that? I’ve seen commercial products that are supposed to keep dogs out of plants, etc, but frankly I’ve never seen them work very well. You?

Here’s another great example of the expression of disgust, by the way, sent in by a reader from Europe of her Pap at a show after being forced to be in cold, wet grass and then touched by a judge with cold, wet hands. Thank you Ute for sending these photos, they are great! 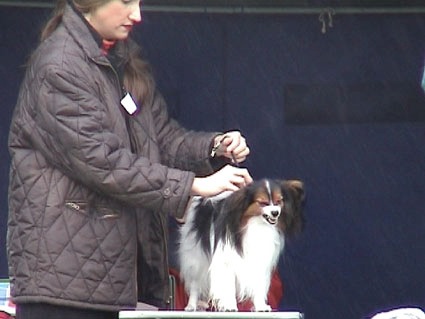 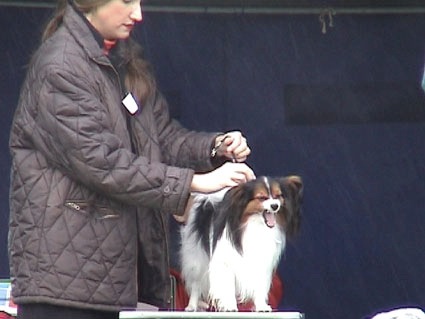 MEANWHILE, back on the farm: Willie’s shoulder is as good as it’s been since the injury last February. He is allowed to run around outside for brief periods with no hobbles and longer ones with the hobbles. Great news is that my adrenals are now getting used to seeing him running around, so I don’t suffer from cortisol toxicity every time I see him run anymore! He is not a fan of the treadmill now, he came out of it yesterday and sniffed the floor of the room for a full three minutes before acknowledging me or Courtney. But it’s helping him, so I sympathized, gave him lots of cuddles when he did come over and then told him to suck it up.

Tootsie continues to make tremendous strides. I am so proud of her. Her recall is coming along beautifully, and I can now take her up into the pasture and keep her from hysterically and desperately eating as much sheep poop as it is possible to cram into her mouth. She gets lots of more appropriate treats and is actually spend time sniffing around the grass, apparently interested in something besides gobbling up sheep poop as if she was starving to death. And for one brief magical moment, Willie and Tootsie actually sniffed each other at the same time a few days ago. Will wonders never cease?

« What Are You Thankful For?
Your Dog Has a Brain in His Gut »