Wow. You all are amazing. So far there have been 165 answers to the question posed two weeks ago, “What’s Your Favorite Non-Traditional Cue?” I’ve read through every one of them with great interest (and often amusement). My plan was to go through all the comments, list every cue mentioned with it definition (some people included as many as 7 or 8), and see if I could  find some patterns.

Several hours later, and less than a fifth through all the cues mentioned, I suspected that a smart person might want to modify the plan. So that’s what I’ve done, whether either out of laziness or wisdom, I couldn’t tell you. I’m using the list I’ve generated so far as a sample, and have re-read all the rest of the comments that have been so thoughtfully provided.

Here’s what I’m seeing so far: First, the most common “non-traditional” cue appears to be “Wait.” It has several variants as to its exact intention, but in all cases the dog is being asked to pause or not move forward. Much more casual and less directive than a stay, I find this an invaluable cue that I myself use every day–at the door, at the car, while walking down a trail, etc. etc. It’s part of the curriculum in Family Friendly Dog Training, so I guess it’s clear that I think it would be good if it moved from “non-traditional” to “traditional.” It’s just so darn handy.

Another category of commonly used cues not often seen in standard dog training is the set of cues telling a dog either that an event is over (“Enough, All Done, All Gone”— ie, no more ball play, no more treats) or to go entertain him or herself (“Settle, Go Settle, Go to Your Place, Chill, Go Pass Out!”) These also seem to me to be incredibly useful cues that all dog owners (and dogs) would profit from knowing.  I use “Enough” several times a day, usually meaning that object play is over, but I as I’m writing this I realized I use a variant, “That’s Enough,” to mean “No more petting.” At first I assumed that Willie didn’t know the distinction, (since I only noticed it while writing this), but perhaps he knew it long before I did?

Notice that, in the variants of Settle, the dog can either decide him or herself to find a place to settle down, or go to a specific area taught in the past. I use Settle myself, meaning go anywhere you want, but for the love of all things good and true, please lie down and chill out for awhile.

The other most common group of cues relate to moving in space: “Turn Around, This Way, Up, Move Over, Back Out, Beep (my favorite!), Go Around,” etc. etc. These strike me as extremely useful as well, although more specific to individual owners and dogs.

One cue, mentioned by a few and one that I have discussed before is “Ready.” I truly wish more people would use this as a way of helping a dog understand what is about to happen. It can be used to prime a dog for action, as it often is in Agility, but also as I use it more often, to let a dog know that something is about to happen, especially if it involves being touched or handled. I use it for Willie when I am about to do something to him, like pick up a paw to dry it off. This gets into another conversation we could have about the balance between keeping cues short and sweet (very valuable at times) and not overwhelming a dog with meaningless chatter AND, at other times, using words to have interchanges with dogs that are more like conversations than a set of “commands.” I’m a fan of both…. Hummm, I’ll have to think about when and why I use different approaches.

While we ponder that, here are some of my favorite cues from the comments about non-traditional cues:

Whoopsie What you just did wasn’t what I wanted, try again.

Who’s a Goof? Roll in the Grass.

Be Bad (Okay, that’s mine, for jump up and put your paws on my chest.)

Who’s a Brave Girl? Go stand between my legs.

Use Your Words or Tell Me Your Story Bark

Sweetheart, can you put your Stagbar on the rug please? Self explanatory!

And What Should You Be Doing? Go lie on your rug

Watch Out for the Panty Hose! 4 on the floor

Chip! Really? As in, did you really just go into the garbage? Dog now puts his paws over his head.

There are a gazillion more, I encourage you to read through them if you haven’t, but it seems appropriate to end on the most unique one I could find:

Gheresh Bede or Farsi for “shake your booty”

MEANWHILE, back on the farm: Two inches of rain last weekend! Amazing! Some people got even more (and northern Wisconsin got snow, lots of it. Oh my.) Everything is so green now it’s hard to imagine it was ever brown. My pasture is still in rough shape, but the front lawn looks like it sprung to life except in a few places. All I can say is that the sheep are very, very happy.

Last Friday Willie was in his last sheepdog trial of the year. I’d say the results were mixed. I purposefully only ran a partial course with him in order to protect his shoulder. I leave tomorrow for a sheepdog training clinic with Patrick Shannahan, and I wanted to be extra sure that Willie was sound enough to work in the clinic. I also wanted him to leave the course wanting more, since the last two trials he was in were exceptionally difficult and stressful for all the dogs. This time his first run didn’t start well: Although he’d appeared to focus on the sheep in previous runs, when we walked to the post he kept looking in the direction of another group of sheep. (Your first job at a trial is ensuring that your dog can find the sheep where they are set out. This is harder than you might think. There are two other groups of sheep, and novice dogs often focus on those rather than the tiny little specks out in the distance.) Willie looked at everything but at the sheep he needed to work, and we messed around for what seemed like forever at the post until I finally just gave up and sent him in the belief that he’d go to the wrong group of sheep.

Nope, he did a perfect outrun to the right group, but by then the sheep had broken away from the dog and handler trying to hold them in place (who must have been cursing me, justifiably, believe me).  Willie didn’t get them back on line until he was pretty close to me, but he did, I stopped him, settled the sheep and said “That’ll Do.” He left the field happy and grinning and his shoulder looked good, so we did our second run a few hours later.

This time I sent him right away, and he did a perfect outrun again. Again the sheep broke from the handler  before he got to them, this time not our fault, but probably not the set out handler’s either: they were extremely flighty sheep. Again, Willie didn’t “cover” them, or flank around them far enough to get them back on line. He had no excuse for that, except his nerves: That’s what you see in dogs without enough confidence to directly confront a flock of sheep dead set on thundering back to the barn. He did get them to me however, pacing nicely as he got closer. We did a little drive which went relatively well, and then on the cross-drive Willie stopped, like a 1960’s civil disobedience protester, and stood still while looking at me and ignoring every signal I sent his way. Honestly, it was almost funny, except I’m quite sure Willie stopped because he was too anxious to continue. The sheep had to be moved directly toward the barn, exactly the direction in which Willie knew the sheep wanted to take off and run to. It’s very scary for dogs to feel in control of sheep if the sheep are moving AWAY from them and from their handler, and it takes guts and courage for dogs to learn to drive unfamiliar sheep on unfamiliar courses at a good distance from their handlers.

Ah, you know how much I love my Willie Boy, but I’m afraid “guts and courage” are not words one would use to describe him. The “Woody Allen of Sheepdogs” would be more like it: brilliant but ridden with angst. We’ll see how the clinic goes this weekend. I don’t want to run Willie in trials if they just distress him, but I would like learn to help him be as good as he could be. Even though his work at the trial had some serious flaws, we did well enough that we didn’t leave feeling badly. He seemed upbeat and happy all day, I had a good time and got some good experience under my belt. I can’t wait for the clinic, it should be lots of fun and very interesting. And to those of you who were there, I still can’t stop singing “Keep rolling, rolling, rolling, keep them doggies rolling, RawHIIIIIIIDE.” Sigh.

Things at the farm are good. It’s still gorgeous even though many of the leaves have fallen. We got another half inch of rain yesterday… will wonders never cease? Tootsie is a happy girl, except for this morning, during which she spent part of the time in the kitchen sink because she had diarrhea all over herself. And me. You all know how that goes. I think it was just a glitch, that she’ll be fine in the future, and am oh so grateful that I can wash her off in the sink. Very handy at 6 am in your bathrobe.

Nellie and Polly are good. Too good. Polly took one look at her momma being put into a carrier crate in order to go to the vet clinic for vaccinations, and darted up a tree. Here she is: Wanna play Find the Kitty? (And don’t worry, she was down the minute we came home and I let her mum out of the crate.) 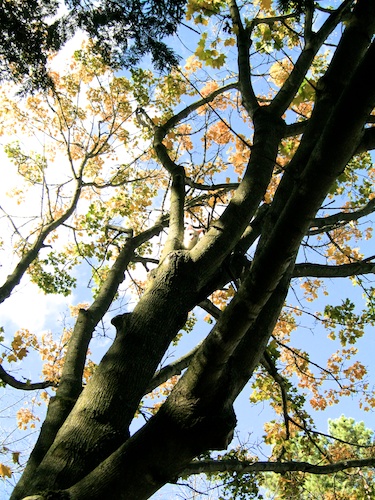