Welcome to an ongoing inquiry about the behavior of people and dogs.
Blog Home >> Animals and the People Who Love Them >> Is Silence Golden?

As many of you know, I did a seminar on new research on canine behavior in Madison last October. (Oh, and by the way, have I mentioned it is now available as a DVD — hot off the press? Tee Hee, we’re pretty excited about it!)  It was a great experience for me, because like all teachers do, I ended up learning even more than I had hoped to learn about the topic myself. One of the findings most interesting to me relates to how we respond to a correct response from our dogs. Two studies suggested we would be wise to be thoughtful about how we do so:

First, Lindsay Wood did research at Hunter College comparing 20 dogs who were trained to nose a target using either a clicker as a marker, or the word “good.” Not surprisingly, the clicker trained dogs were significantly faster to reach criterion than the dogs who heard “good” rather than “click” before they received the food reinforcement. I say not surprisingly, because first, acoustically the sound of a click is better at getting an animal’s attention  because of it’s abrupt onset and offset, and also because it is a “broad band” sound, meaning it stimulates a large range of acoustic sensors in the brain. In addition, clicks are unique in the “sound scape,” unlike words like “good,” and can be produced consistently, whereas speech tends to vary depending on a variety of factors.

But get this: Another study by Smith and Davis, published in Applied Animal Behavior Science (2008) taught Basenji’s to target an object using either a 1) Clicker + Food or 2) Silence + Food. In this case, the click of the clicker was NOT more effective. The dogs who received no acoustic marker after the behavior learned at the same rate [note I’ve edited this from my first post. See subsequent posts later in the month for more of this. The plot thickens!]  the group in the standard “click/treat” category.

I’d love to hear your interpretation of this finding. Here’s mine, feel free too add (or subtract): In the case above, the dog was asked to do a relatively simple behavior, touching nose to cone. In that case, any sound was simply a distraction and the dog did better if there was nothing between the action and the primary reinforcement, the food. However, I would argue that if the behavior being trained is more complicated, and requires shaping and precise timing of the marker, then a clicker would be more effective. As I thought about it, I realized that’s exactly how I use clickers myself: not for simple actions like sit and lie down, but for more complicated behaviors that have to be divided into steps. Make sense?

[Again, more to come on this! I’m re-reading the study and going over the methods, and as I said earlier, the plot thickens!]

In this same study, note that the dogs who were clicker trained were more resistant to extinction, but note that “extinction trials” took away the primary reinforcer (food), but not the secondary one (the click). Compared with silence, it makes all the sense in the world that dogs would continue nosing the object if they heard a click afterward than silence, yes?

I’d love to hear your thoughts… or any more research you know about that might be relevant. Research like this is what made the Madison Seminar such a hoot to do. We reviewed the DVD and Tawzer video did a super job recording the seminar, hope you enjoy if you are so inclined.

MEANWHILE, back on the farm: I’m back in pre-seminar mode, about to leave the office to get ready to do a day-long seminar on canine behavior at UW-Madison. I’m speaking to vet students, vets and vet techs, and very much looking forward to it. (I’m giving them a case study to work on: It’s Willie, so that’ll be interesting, hey?) It’s ridiculously warm here still, in the 30’s and 40’s during the day, but it freezes at night and produces lots of problematic ice. Most of the ice has melted though in front of the farm house, so I don’t worry as much about Willie slipping on it as I did. Whew.

Here’s what we’ve been doing when we weren’t working at our jobs, exercising us or the dogs or doing chores: working on a 1,000 piece jigsaw puzzle for the last 2 weeks. (Talk about the addiction of intermittant reinforcement! I hereby admit to becoming addicted to this puzzle; every night I’d say: “I’ll just find one more piece to fit in, then I’ll stop.” Fifteen minutes later…..). The night we finished it I ordered 2 more 🙂 (love the company, Pomegranate, which makes high quality puzzles and cards) because, for me, jigsaw puzzles are a “flow” exercise, in which I think about nothing but what I’m doing, rather than “monkey-minding” and thinking about work, chores, etc etc…..). Sort of like meditating for lazy people. 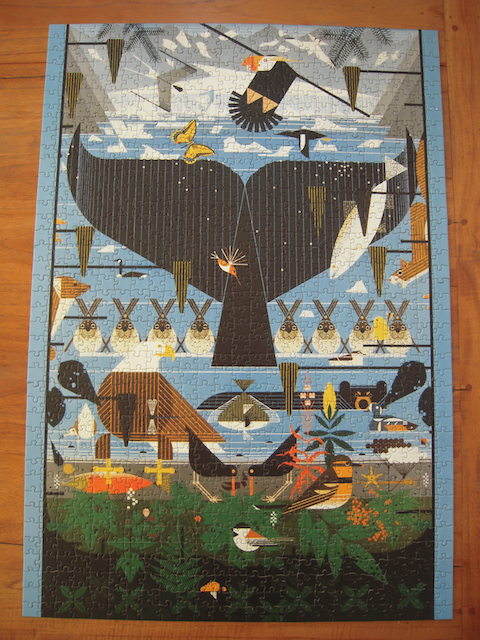 « Missing the Sense, Scent of the Missing
Do Dogs Form “Real” Friendships? »