Welcome to an ongoing inquiry about the behavior of people and dogs.
Blog Home >> Animals and the People Who Love Them >> What Makes Your Dog Happy?

This seems like a good question to begin a new year together in our inquiry about human/animal relationships. I’ve been engaged, as so many others are at this time of year, in writing out my goals for 2016. Some are personal, some are professional, and many, not surprisingly, relate to my dogs. I spent a lot of time last week thinking about my hopes and plans for them: Maggie–more comfortable around dogs who, shockingly, are not Border Collies, Willie–a sound body all year long, even if I have to retire him for herding [I do], Tootsie–a final solution to her tummy and UT problems). As I was pondering how to accomplish all that yesterday, I sat at the table in the dining room, all the better to both write and keep my eye on Willie and Maggie. They needed watching because they were outside, gnawing on raw bison knucklebones in the snow. 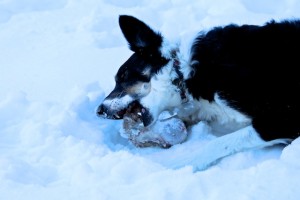 While both dogs were chewing away in the snow, their behavior differed markedly. Maggie was laser-focused on her bone the second it appeared, and began exercising her teeth and jaws as if working out at a gym. Willie, on the other hand, tentatively licked the bone once, then again. He looked at me; he looked toward the barn where Jim was working. He licked the bone again, then nibbled on it before looking up again. Eventually Willie set to chewing on the bone, but not with an intensity similar to Maggie’s. 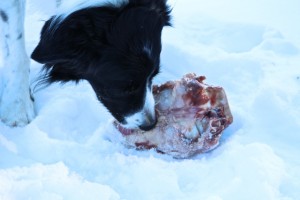 What matters to our discussion here is not so much why Willie’s behavior was so different from Maggie’s. What matters is that it was. (For the record, because you’re probably wondering–I suspect Willie’s behavior related to breaking a tooth years ago on a hard, long bone that he never should have had.) What made Maggie blissfully happy did not have the same effect on Willie. This is just one simple example of how different dogs need different things to make them happy. On the one hand it seems ridiculously obvious to make that statement. All dogs are not alike. Duh. On the other, it’s my experience that what seems patently obvious often gets less attention than it should. And it brings up the question: What does a dog need to be truly happy?

This is why I hereby change my dog-related 2016 goals from the list above to “I want each of my dogs to be as happy as they can be.” In some ways, one could argue that is merely a restatement of my more specific goals. For example, one way to make Willie happy is to allow him to play freely and avoid being on leash/crate restrictions. Maggie will be happier if she perceives non-Border Collies as playmates rather than monsters. Tootsie will be happier if her tummy doesn’t hurt.

But, it still feels different—putting the emphasis on happiness shifts my perspective in a way that feels important. I’m reminded of Maslov’s famous hierarchy of needs, from physical needs like food and water to “self-actualization.” Subsequent research has found that his hierarchy is not universal (culture and other factors can have significant effects for example), but once I began focusing on “happiness for dogs,” I still found it an interesting exercise. Here’s what I came up with when I attempted to translate Maslov’s hierarchy to dogs: 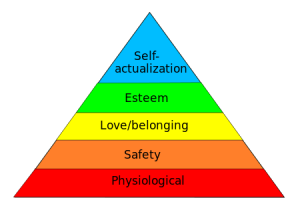 Physiological Needs: First on the Maslov’s list, (at the base of the triangle) this includes food, water, oxygen, etc. (Maslov, controversially, includes sex. Maggie, currently in standing heat, would concur.) This reminds me how important not just food, but GOOD food is for my dogs. I spent much of yesterday cooking up all the scraps I’d crammed into my freezer to make chicken/beef/lamb/turkey soup-broth for the dogs for their dinners. I often supplement their dinners with high-quality canned dog food, but I’m resolving to do a lot more cooking for the dogs in 2016 than 2015.

Safety: It is true that food, and water are essential to any mammal’s survival, but I think it is crucial for all of us to remember how often dogs feel unsafe. They have so little control over what happens to them—they are unable to leave an empty house, usually restrained on leashes when outside, and often forced into frightening situations. And many of them are tiny—we must look Brobdingnagian to them. (I am grateful for an excuse to use that word. Thank you Mr. Swift.) I think about what the world must be like to Tootsie, who is tiny, and can be bowled over by exuberant Border Collies or even when Jim or I roll over in bed. Maggie needs to feel safer around unfamiliar dogs–she’s improved a great deal since I got her, but I’m resolving to do much more this winter. I slacked off a bit in 2015, and it’s high time I got back to it.

Love/Belonging: Surely this is as important to an animal as social as a dog as it is to humans. Clearly “belonging” is more important to some dogs than others, but anything we can do to help dogs feel connected and loved surely is a good thing. Both our own dogs (Do you quietly and intentionally tell your dogs how much you love them everyday? I try to; this year I will make it a point to do it every day) and dogs who have no homes. I’m re-committing myself to doing what I can do help homeless dogs in any way that I can this year.

Esteem: Now, there’s a controversial category when it comes to dogs. Can a dog feel “esteem?” I will argue that they can, and that although “esteem” might feel different to a dog than a human, every dog still needs a sense of confidence and yes, even ‘achievement.” No doubt I’m influenced by having working sheepdogs, who radiate what I can only describe as pride after successfully managing a difficult group of sheep. Do all dogs “need” to feel accomplished? Perhaps not, but surely even a couch warmer like Tootsie can profit from feeling like she learned/achieved something. Teaching tricks is a great way to give dogs a sense of accomplishment—there’s no pressure on them to be “obedient,” or on you to have “an obedient dog.” There is nothing to lose and everything to gain when teaching tricks—and perhaps best of all are the shiny eyes of a dog who has just figured out how to perform a new trick. Maggie’s esteem will come from an increased proficiency when working difficult sheep, Willie and Tootsie from an expanding trick repertoire.

Self-actualization: Got me there. Do dogs need a sense of “morality, creativity, spontaneity, problem solving and lack of prejudice” to feel as happy as a dog could be? Hmmm. Problem solving? Maybe. “Creativity?” Not sure. “Spontaneity?” Yes, I’d say—surely all dogs yearn to be able to be spontaneous. (And aren’t they usually? Isn’t that part of why we love them?) Morality? That’s a tough one. Perhaps gist for another blog?

I’ve rambled on longer than I had intended (yeah, that never happens), but hope you will take up this issue by writing about what your dog(s) need(s) to be deeply and truly happy, and what you can do to try to provide it. I write this knowing that some of you have deeply troubled dogs, or dogs who are struggling with serious health issues. For them, all we can do is strive for “as happy as is possible,” which of course, applies to us too. I look forward to hearing your thoughts, and whether “Making My Dog Happy” seems like a good goal for the New Year. Here’s to a year that is kind to us all, two and four-footed alike.

MEANWHILE, back on the farm. Finally, the best of winter has arrived! The horrible mud of November and December has disappeared under a layer of snow. Granted, the snow was full of ice when the storm hit, and it was awful to shovel, but we felt so lucky given all the troubles that people suffered in the rest of the country. Right now, it’s blue-sky sunny, so appreciated after what felt like months of pouring rain or irksome drizzles. Lately it’s been in the mid-twenties, with no wind–as perfect as weather can be in winter. We’ve had some lovely walks in the snow in the last few days, and I could even work Maggie on the sheep in the barnyard. She needs more confidence working in tight quarters, so it’s a valuable exercise.

Willie is officially retired from working sheep. Yes, it was (and is) a hard decision, but it is made much easier by asking “What makes Willie happy?” Willie and I met with the surgeon who repaired his badly injured shoulder and his physical therapist last week, and they both agreed that being in a ‘stalking’ posture was not ideal for keeping him pain free. Decision made. Besides his lack of structural soundness, I can tell that Willie has lost his heart to work. He even tongue flicks sometimes when I ask him to “Walk up.” I think it is in part because he knows that he can be injured, and that he simply doesn’t have the drive anymore to take the risks necessary to work sheep at a competitive level. Herding sheep is far harder than most imagine–it takes an intense combination of physical and mental exertion that takes guts and heart and commitment. I’ll still let Willie ‘play’ at herding. I call it “lopey lopey,” when he lopes behind the sheep and moves them with his body rather than his eye. It will give Willie a chance to still feel like he is working sheep without asking him to do something that he’s just not capable of doing anymore. (By the way, Willie is nine and a half, the age I’m told that quite a few working dogs start to slow down.)

Tootsie seems to be enjoying her Pet Pals work more than ever. I’ve learned to place her belly up on the children’s lap, all the better for the kids to stroke her tummy. Besides looking adorable (people walking past the door stop and say “Awwww, she’s SO cute!”), she seems to relax in that position faster than any other. I’m going to teach her some new tricks and continue working with her vets to try to improve her tummy situation. (She’s licking her paws again, even with the Ginger/Mint drops I give her which used to solve the problem.)

Time to stop writing and play with my dogs! Sloppy kisses to all of yours. Here’s what Willie and Maggie were up to just minutes ago.  No question that this makes both of them equally happy! 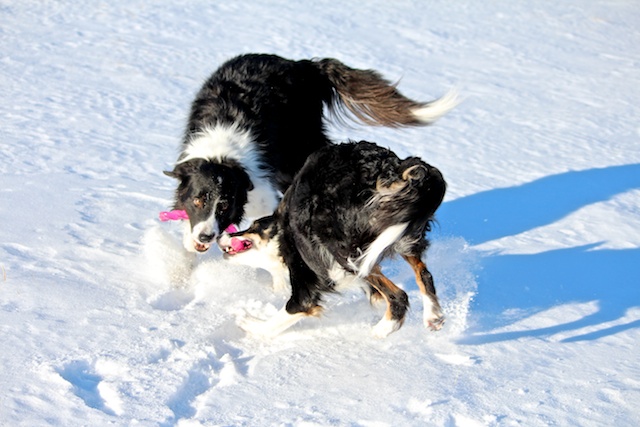 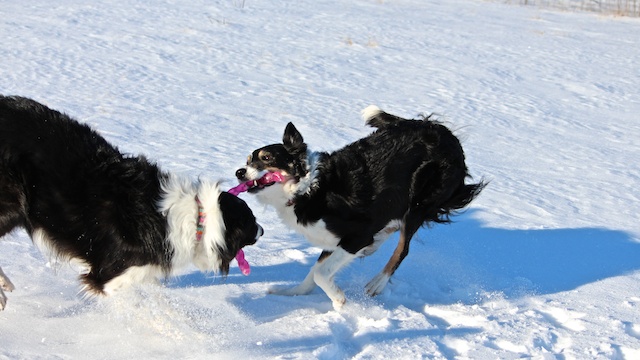 « My Holiday Card to You
Take Your Dog on a Sniff »