Welcome to an ongoing inquiry about the behavior of people and dogs.
Blog Home >> Animals and the People Who Love Them >> Who’s Your Momma? 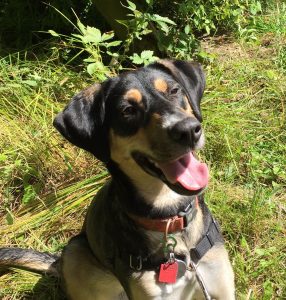 Colby at about a year of age

Meet Colby. Colby was adopted by my friend Renee at about seven months of age. She came up from the south, parentage unknown. Renee was curious, and so sent off a DNA sample to the folks at Wisdom Panel® to see what they had to say about her heritage.

Here’s what came back: 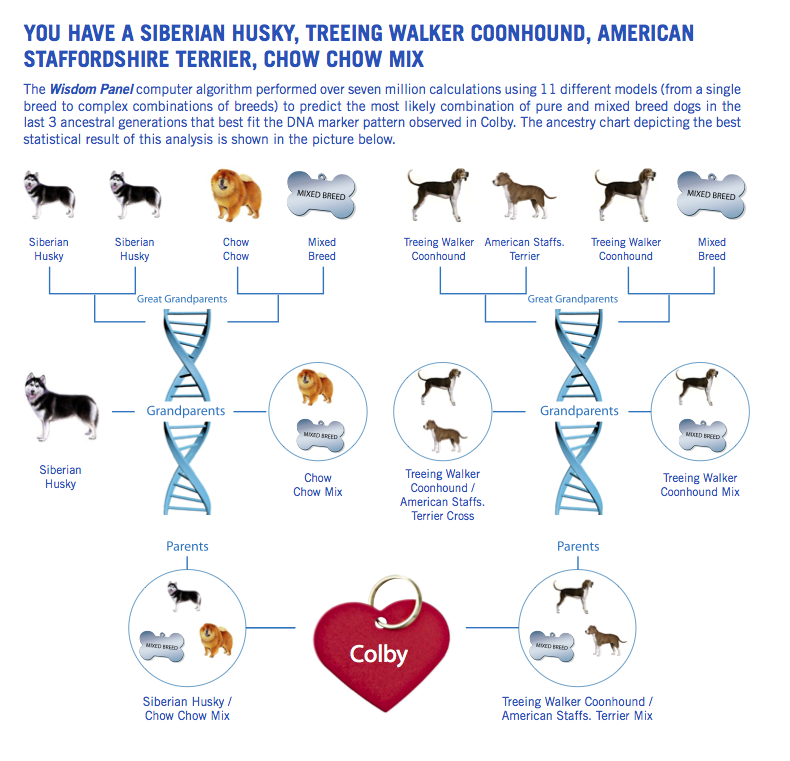 The hound heritage was not a surprise. As a matter of fact, when Renee first showed me the dog’s photo on a website, I said to my friend who has always had herding breeds, “She has an adorable face, but you do know she’s probably got a lot of hound in her, right?” The “Treeing Walker Coonhound” ancestor sent Renee to this link that illustrates why the word “Treeing” is in the dog’s name. After viewing the video, Renee wrote:

Yesterday on our walk, Colby launched herself at a tree that has a notch about 6 inches above my eye level.  Her front paws hit within inches of that notch.  I have no doubt that, if she’d gotten to the notch in the tree she would have kept going. So, this is the kind of behavior one loses sleep over. . .

Thus, a lot of hound in her background made sense. Less obvious, however, was the contribution of Siberian Husky, American Staff and Chow Chow. As I noted in a 2013 article about DNA technology to determine canine ancestry, genetic matches below 25% are a bit dodgy, but the Wisdom Panel® results stated confidently that one of Colby’s grandparents was a Siberian Husky. You’ll note too that there’s quite a bit of “mixed breed” in there. Hold that thought.

Fast forward a few weeks, and lo and behold I get an email from a new canine ancestry company called Embark. Would I be interested in looking into their product? Sure, and I had just the perfect way to do it. Renee jumped on board instantly, and we sent off another sample of Colby’s saliva to see how the results of the two companies would compare.

Here are some the Embark results:

There’s that Siberian Husky again! Interesting. But wait… what else? 30% Labrador and 16% GSD? Now that’s a switch. Looking at photos of Colby, this result seems reasonable too if you think about it. We all know (thank you Scott and Fuller) that first, second, third and fourth (etc) generation dogs can look very much like their parents, or very little like them. And certainly Colby’s face, size and ears could indeed be the result of a lot of GSD and Labrador genetics. But what do we do with the fact that we have two companies, both with some serious scientific cred behind their names, coming up with significantly different backgrounds for one dog?

I put that question to Dr. Adam Boyko, who is an Assistant Professor in Biomedical Sciences at the Cornell University College of Veterinary Medicine. He’s the man behind a lot of the work featured in the well-known National Geographic article on canine genetics, and the founder of Embark, so I started by asking him about the different results about Colby’s heritage.

Boyko suggested that the primary reason the companies got different results derives from the different methods they use. Embark states it uses a much larger number of markers than Wisdom Panel® (over 200,000 markers compared to about 1,800 in  Wisdom’s) and looks at chains of markers (like a “bar code,” he said) instead of individual markers. However, it’s not just about the markers.  I also spoke at length with Dr. Angela Hughes from Wisdom’s parent company, Mars Veterinary, and she explained that they view the analysis as based upon three things: 1) The number of samples used in the analysis, 2) the number of markers identified and 3) the algorithm used to churn out what it all means. Wisdom Panel® looks at fewer markers, but it has a larger data base (12,000 individual breed samples versus Embark’s 6,000), and a much larger sample of breeds sampled over all, or about 250 breeds/types or varieties in total (for example, “show” Border collies versus working ones). 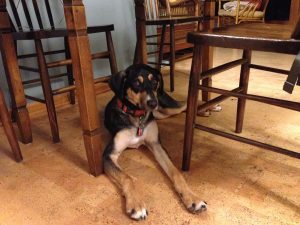 What are we dog owners to make of this? How do we interpret the results of these two company’s analysis of Colby’s ancestors? Besides the fact that both companies agreed on Siberian Husky, which is certainly compelling information, could it be that the mixed breeds in the Embark results are from a hound heritage, and the mixed breeds in the Wisdom Panel® are from Labs and GSDs? Possibly. I asked Dr. Hughes if that was reasonable, and she said indeed it could be true. Looking more deeply into Colby’s “mixed breed” genetics, she found evidence of “herding breed” heritage, which certainly could explain the GSD results of Embark. And what about the strong heritage of Treeing Walker Coonhound that the Wisdom analysis found? Why didn’t that show up in the Embark results? It could be, perhaps, that those genes live in their “mixed breed” category. However, it is notable that if you check on their website under “breed list,” the Embark site doesn’t list Treeing Walker Coonhound on its list, (or any  kind of coonhound), which might explain why it doesn’t show up.

What I would say is that if you really, really want to know the ancestry of your dog, and you can afford it, send in samples to both companies. When both companies come back that Colby has Siberian Husky in her, it’s hard to dismiss. (And I love that none of us would ever guess that from looking at her picture. Well, maybe you did?) I have to say that Colby’s tree-climbing behavior is highly suggestive of the Treeing Walker ancestry, and I do like that the Wisdom Panel® has a larger number samples in its data base. Dr. Hughes told me that Wisdom tested 200 mixed breed dogs of known ancestry, and found that their results were 92% accurate. I should mention I failed to ask Dr. Boyko the same question… maybe we can get him to chime in on the comment section?

I can tell you that the scientists in both companies were generous with their time (I’ve only written a fraction of all we talked about), lovely to talk to and clearly believe strongly in their products. Embark is more expensive than Wisdom Panel® ($199 compared to $84.99). Both companies also provide an analysis looking for markers of genetically-mediated diseases (whose markers, by the way, are more discrete and easier to pinpoint than that oh-so-squishy “breed” category). Embark includes it in their analysis, Wisdom Panel® charges extra for it, which is in part why the general analysis is less expensive.

Here’s my bottom line: I do think there is value in looking into a mixed breed dog’s ancestry–not just from our own sense of curiosity, but also in the universal sense of gathering genetic information about a range of dogs all over the world. Who knows where that information will take us? However, this is still a young and growing science, and it’s important for us to understand what we can, and can’t, surmise from the results. I’d strongly advise anyone who gets results that seem surprising at best, impossible at worst, to contact the company. There’s a lot going on behind the somewhat simplistic information that is sent out, and if you’re interested in your dog’s ancestry, you’ll probably be interested in some of the details behind it.

What about you? Have you sent in DNA samples to any company? If you haven’t, are you curious? If you have, what about the results? We asked Colby what she thought of all this. So far, our Siberian Husky/Hound/GSD/Labrador/Chow Chow/Staffie/mixed breed adolescent is not talking.

MEANWHILE, back on the farm: Fall is glorious… glorious weather, glorious color and glorious skies in the morning. 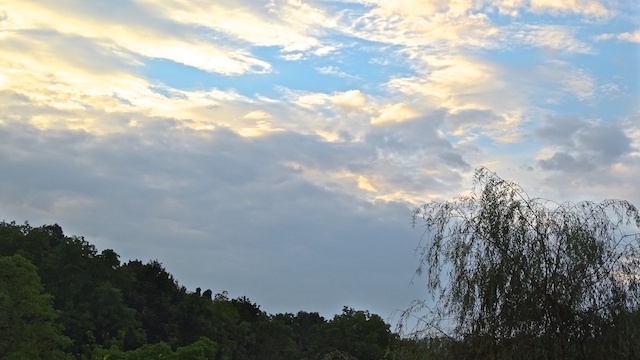 I almost deleted this photo of Polly leaping up onto the wall, but the contrast between the crisp colors of the Zinnias and the fuzzy, ghost-like blur of Polly brought me back. Now it’s one of my favorite photographs of the season. 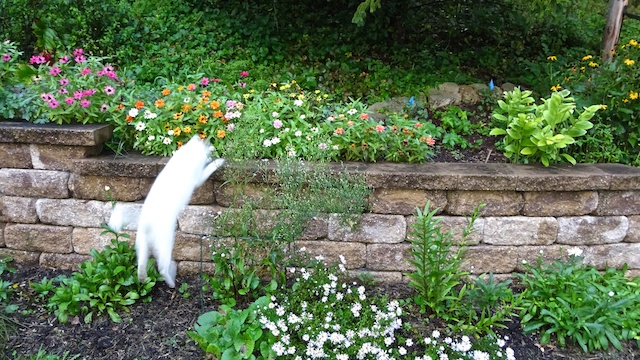 « Free to a Good Home? (Booklets, Not Dogs!)
First look at my memoir: The Education of Will »